The first new invasive tick to be found in the U.S. in 50 years, the critters may be able to spread disease and are found in nine states.

To the naked eye, the Asian longhorned tick isn’t much different than other ticks found in the United States: It too has eight legs, a round body, and mouthparts that latch onto its chosen host. But this arachnid is native to East Asia—where it has been shown to spread disease—and it’s quickly moving through the eastern part of the country.

It’s also the first new invasive tick species that the country has seen in some 50 years, according to the Centers for Disease Control and Prevention

The first U.S. specimen was found in August of last year, in New Jersey. Already they’ve been identified in eight more states, from Connecticut to Arkansas, and the expansion seems poised to continue. A study published December 13 in the Journal of Medical Entomology shows that a wide range of North America has favorable conditions for the arachnids.

species from East Asia­—thrives in temper-

from 260 known tick populations in the

to identify areas in North America where

the species will be most likely to live. 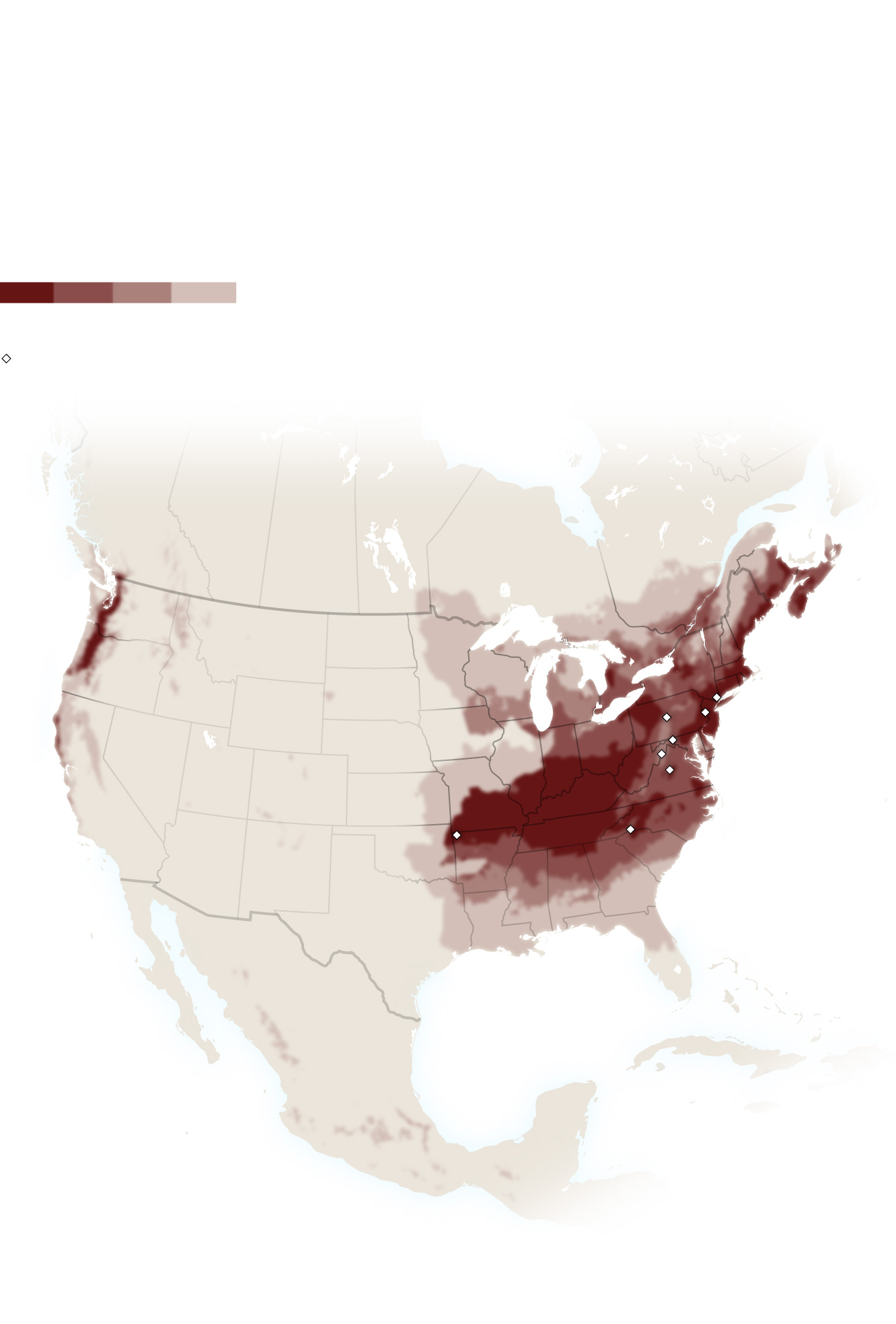 Modeling climate data from 260 known tick populations in the Eastern

Hemisphere, researchers were able to identify areas in North America

where the species will be most likely to live.

“It has the potential to be widespread in the continental U.S. and southern Canada,” said study author Ilia Rochlin, a professor at Rutgers University in New Jersey. “This tick is very adaptable.”

Rochlin also notes that while this species does have the potential to spread pathogens, as the CDC also warned last month, no active disease transmission has been yet discovered in the U.S. population.

Asian longhorned ticks first came to light in the U.S. after a New Jersey woman found the tiny creatures while shearing her pet sheep. “The original sheep had a lot of ticks,” explains Andrea Egizi, a research scientist for Monmouth County, New Jersey, where the ticks were first tested.“Probably in the thousands.”

Egizi used DNA sequencing to identify the origin of the species (Haemaphysalis longicornis). When she realized what she had discovered, she wasn’t sure what to do at first. “There's no 911 for invasive species.”

The U.S. Department of Agriculture and CDC were soon made aware of the find. “We have been watching the story unfold for a number of months,” said Ben Beard, a scientist at the CDC. The new information also prompted researchers to re-examine older collections, where they ended up finding Asian longhorned ticks gathered in the U.S. as far back as 2010.

Nobody is quite sure how the first Asian longhorned tick arrived in the U.S. But one key contributor to its rapid spread is the fact that females can reproduce through cloning themselves, without the need for mating, a process called parthenogenesis. This can also make it extremely harder to control, says Rochlin. “In practice, it's impossible to eradicate this species.”

Though the specimens collected in the U.S. haven’t yet been shown to carry known pathogens, in their native range, longhorned ticks are vectors for serious human diseases – perhaps most notably, severe fever with thrombocytopenia syndrome (SFTS), which can be deadly. And because the U.S. is home to a close relative of SFTS– the Heartland virus—the worry is that the longhorned ticks could eventually start carrying this and other pathogens in America too.

“We're very concerned about that,” said Beard. “Out of caution, we're assuming that this tick could become infected and transmit to a human.”

The longhorned tick (Haemaphysalis longicornis) is also known as the bush tick or the cattle tick. As the name implies, these ticks often prefers livestock as hosts, which puts bovine, sheep, and the like at an even greater risk than humans. However it can also prey upon wild animals such as deer.

The threat to livestock comes not just from disease but also blood loss when longhorned ticks attach by the hundreds or thousands. A dairy cow, for example, may see its milk production drop by as much as twenty five percent after becoming a host. And, as the tick continues to proliferate, millions of animals across the country could conceivably be exposed.

Still, research into this and other tick species remains quite limited. “Compared to mosquitos, ticks are kind of neglected,” said Rochlin. “They’re the orphan of medical entomology despite their huge public health impact.”

Rochlin lives on Long Island, where he’s seen a tick explosion of late. In the summer he says his backyard becomes practically unusable. So, when he heard about this new variety of tick– which is a characteristically aggressive biter–Rochlin wanted to know more about its range.

To tackle the question, Rochlin compared environmental factors in the Asian longhorned tick’s native range—predominantly Eastern Asia, New Zealand and Australia—to areas of North America with similar attributes. Using a common machine learning analysis technique, he found that variables such as temperature, relative humidity, and precipitation were particularly important in determining the tick’s range and the finding that much of the eastern U.S. and southern Canada could prove to be favorable habitat.

“It's a very well-done study,” said Krisztian Magori, a biologist at Eastern Washington University, who has also been looking at longhorned tick distribution modeling. Magori says he’s found generally the same ranges as Rochlin, though notes that no model is going to be perfect given the limited amount of data currently available.

One of the variables Magori says, is that there are a few different types of Asian longhorned tick that differ slightly depending on origin (China versus New Zealand, for example) – and we’re still unsure which variety or varieties made it to North America.

“We don't know exactly how far it's going to go,” he said, “But what [Rochlin] is providing is a best guess.”

David Allen, a biologist at Middlebury College in Vermont, agrees. “This is a pretty standard technique and often it works great,” he says, with the caveat that “the model is only as good as the distribution [data] they're going off of.” And, to date, that’s been relatively limited.

Rochlin also acknowledges the issues related to a dearth of data, which is one reason why he hopes that public health officials ramp up surveillance, collection and awareness efforts for not only this species of tick, but others as well.

“In the past, we haven't been able to do a very good job at [tick surveillance],” said Beard, attributing those limitations to often tight budgets that are allocated to specific disease. But more recently, he says, there has been a relative spike of interest in, and money for, tick related programs. “The good news is that we're going to be doing more and more of that. And we've actually started.”

Beard says the CDC recently published new distribution maps for some common ticks (especially those that carry Lyme disease) and the plan is to expand the project to include other species as well, including the longhorned tick. The CDC, he says, also has two longhorned tick research colonies at its lab that it can use to test which hosts the ticks prefer and what diseases they might be capable of carrying. The USDA is also spearheading a “National Asian Longhorned Tick Stakeholder Group,” made up of experts and officials around the country.

“Moving forward into next year, we'll be launching a more systematic effort into figuring out where the [Asian longhorned] tick is located,” Beard said. And, in the meantime, he urges the public to keep taking tick precautions, such as wearing repellent, doing tick checks, and drying clothes on high heat for 10 minutes to kill any cling-ons.

Rochlin knows these routines all too well. But, amidst all the ticks in his backyard, he says he hasn’t come across an Asian longhorned tick in person... yet. According to his analysis, Long Island is a very suitable environment for the ticks —so he believes it’s only a matter of time before they show up.

“Eventually they're find it here,” he said. But what really concerns him is the lack of information. “Personally, I'm worried because you don't know what the impact of the tick is going to be in the future.”