Where lions once ruled, they are now quietly disappearing

There are half as many African lions than there were 25 years ago. Conservation programs aim to protect the disappearing species by promoting human-lion cohabitation across the African savanna.

For every lion in the wild, there are 14 African elephants, and there are 15 Western lowland gorillas. There are more rhinos than lions, too.

The iconic species has disappeared from 94 percent of its historic range, which once included almost the entire African continent but is now limited to less than 660,000 square miles. With fewer than an estimated 25,000 in Africa, lions are listed as vulnerable to extinction by the International Union for the Conservation of Nature, which determines the conservation status of species. 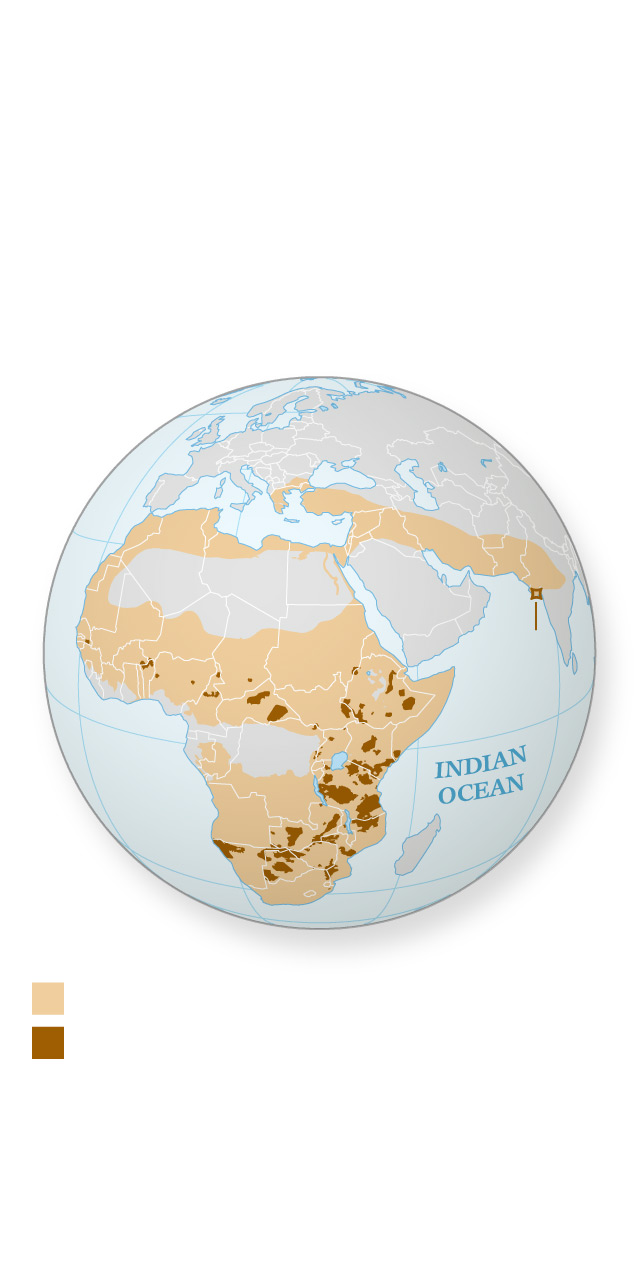 Lions were once found on three continents but have since disappeared from 94 percent of their historic range.

Now fewer than 25,000 wild lions are estimated to remain in Africa.

A group of around 600 Asiatic lions

are isolated at a national park in India.

Map does not show lions LIVING in fenced areas OF

To put things in perspective, the nonprofit Wildlife Conservation Network (WCN) notes that lion numbers have dropped by half since The Lion King premiered in theaters in 1994. (The Walt Disney Company is majority owner of National Geographic Partners.)

“Lions are truly one of the world's universal icons, and they are quietly slipping away,” says Paul Thomson, director of conservation programs for WCN. “Now is the time to stop the loss and bring lions back to landscapes across the continent.”

To save the iconic African prides, conservationists are working toward driving down the costs related to living beside them and highlighting the local value that exists in protecting them.

Africa’s revered predators face myriad threats that put their very existence at risk. The decrease in lions’ wild prey for the bushmeat trade forces lions into dangerous contact with humans and their livestock in search of food. But if the cats prey on cattle, they may be killed in retaliation—often by poison. And as human settlements grow, lions lose their habitat and see it fragmented, making it difficult for males to find new prides and mate. (Read more about how poison is a growing threat to Africa’s wildlife.)

Poaching, too, poses a threat. Skin, teeth, paws, and claws are used in traditional rituals and medicine, and there’s a growing market for lion parts in Asia as well.

Conservationists hope to halt the decline of the fragile species by supporting the coexistence of lions and humans across Africa. Part of the solution is offsetting the financial burden required to manage the protected areas, which are the backbone of conservation, as well as protecting lions in unprotected areas, says Amy Dickman, a National Geographic grantee and research fellow at the Oxford Wildlife Conservation Research Unit (WildCRU) and the co-author of a 2019 report called “State of the Lion.”

“If we want lions to exist in 50 years from now in any meaningful way, we need to adjust the costs and benefits so that far more of the benefits accrue at the local level and the costs are borne at the international level,” Dickman says.

The survival of the species depends on working with local communities that must coexist with lions and recognizing their role in protecting them, says Peter Lindsey, director of the Lion Recovery Fund. (The fund was founded by the WCN and the Leonardo DiCaprio Foundation and is sponsored in part by Disney.)

One way forward is providing tangible benefits to those living alongside lions for conserving them. For example, some conservation models reward communities that show an increase in lion numbers, which provides an incentive not to poach or retaliate against them for livestock kills. Compensation schemes work similarly, paying livestock owners to replace animals that are killed by lions. These kinds of programs can change a community's overall attitude toward animals they may have previously been seen as a threat to safety and livelihood. If the benefits of living near lions can outweigh the cost, then people will choose to protect them, Dickman says.

“If there are predators in the area, they communicate it to the herders who are out there with their livestock,” said Shivani Bhalla, the founder and executive director of Ewaso Lions and a National Geographic grantee, at a presentation at National Geographic’s headquarters. In exchange for their scouting and warning herders, the young men said they’d like education. Ewaso Lions started a Sunday school, and now every person in the program can read and write in Swahili, Bhalla said.

It’s had a positive impact, according to surveys done by the organization a few years ago. “We were so excited with the results,” Bhalla said. “They showed that local people’s attitudes toward predators had significantly improved as a result of the warriors working with them. The warriors also felt much more socially empowered as a result of this project.”

What it’ll take to conserve lions

The Lion Recovery Fund has invested more than five million dollars in conservation projects in 17 countries since 2017, but there’s still a serious budget crisis, Lindsey says. Many African countries have set aside large protected areas, but insufficient funding often stymies effective management of them. In a 2018 study he co-authored with Amy Dickman and others, he found that it will require more than one billion dollars annually to secure the lions in Africa's protected areas. Current funding totals only about $381 million a year.

Aside from funding shortfalls, civil unrest or remoteness can also make it difficult for local authorities to defend protected areas, he says.

It’s critical to make sure political leaders see the value in conserving lions. It goes beyond just the benefits from the tourism industry, which supports economic development and job opportunities, Lindsey says. By protecting lions' natural habitats, communities are supporting cleaner air and water, and carbon storage, he notes—factors that are important for human health and the well-being of rural communities.

In time for the mid-July release of the all-new The Lion King movie, The Walt Disney Company has also teamed up with the Lion Recovery Fund for the “Protect the Pride” campaign, which aims to educate audiences about the lion crisis and encourage them to support to conservation projects.

Though lions' situation is critical and the funding shortages are dire, Lindsey is hopeful about preserving the iconic predators, which he said are “extremely resilient.” If Africa’s protected areas receive the funding required to manage them properly, the current lion population could triple in size, he says.

“The is a window of opportunity to act now,” he says. “If we wait, these wildlife populations will be lost.”