The silent decline of the platypus, Australia’s beloved oddity

Recent studies suggest the duck-billed mammal is not as widespread as thought, in part due to centuries of hunting and habitat loss.

The platypus is one of Australia’s most beloved species—and, seemingly, one of its most resilient. Even as many of the continent’s native fauna declined or disappeared throughout the 20th century, the quirky duck-billed mammal with webbed feet was seen regularly enough that there was little urgency to monitor the animal’s populations. That is, until biologists began to realize the freshwater dwellers weren’t ok, and they probably weren’t all along.

“The platypus has declined right in front of our noses,” says Tahneal Hawke, a Ph.D. candidate at the University of New South Wales and a researcher with the Platypus Conservation Initiative. 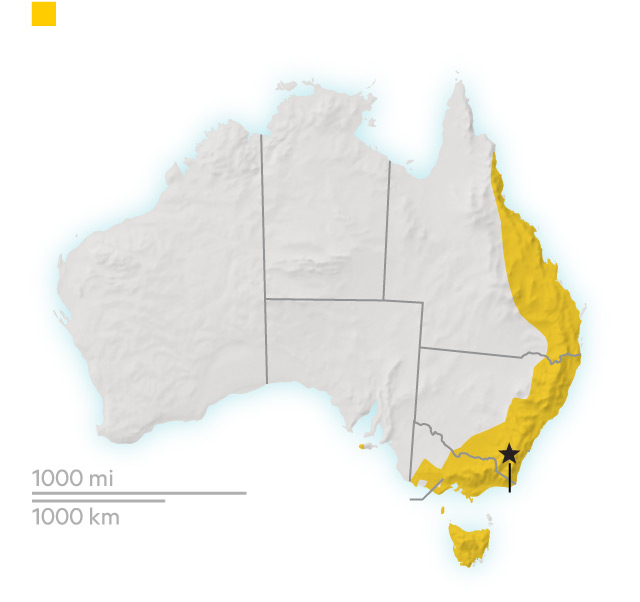 “We have a huge area across the range of the platypus where we literally don't know if they're even there or in what numbers if they are.”

Hawke co-authored a new study that surveyed centuries of historical data and suggests the platypus—found in rivers and streams throughout eastern Australia and Tasmania—has been plummeting in number, due to hunting, habitat loss, and climate change.

Some scientists started sounding alarms of the platypus’ decline as early as the 1980s, but their warnings fell on deaf ears. Then, as more and more data from long-term monitoring programs set up in the 1980s and ‘90s trickled in, the perception of the ever-stalwart platypus began to dim. (Read more about how the venomous, egg-laying platypus evolved.)

“We’ve been monitoring platypus since 1995,” explains Tiana Preston, an environmental water resources planner for the Victoria state agency Melbourne Water, “and the decline is certainly evident.”

When the IUCN reassessed the platypus in 2016, the group estimated that populations have dropped by about 30 percent on average overall since Europeans arrived—enough to elevate the animal’s status to “near threatened.”

Now, some scientists think that’s an understatement. “There isn't a ton of great data, but the data we have suggests that our estimate of where that baseline is wrong,” says co-author Gilad Bino, a research fellow at the University of New South Wales. “I wouldn't be surprised if the numbers have halved or even more.”

How did such losses slip below the radar? Part of the reason is platypuses are shy, nocturnal creatures that are difficult to find and count, so not seeing them doesn’t stand out as strange. But mostly, declines seem to have missed because the animals were considered common enough that no one kept tabs on them. Over time, everyone forgot how many there used to be, so they just assumed the numbers hadn’t changed much—a phenomenon known in ecology as a shifting baseline.

Not only is the platypus an important freshwater carnivore, it is an evolutionary gem, one of the last remaining monotremes—or egg-laying mammals—left on Earth. And we’ve only begun to discover its wealth of secrets, from life-saving antibiotics in its milk to potential diabetes cures in its venom.

When Europeans came to Australia in the 17th century, platypuses became a favorite of fur traders for their soft, waterproof skins, and business boomed for centuries until hunting was outlawed in the early 20th century.

“There was one particular record that we found that suggested a single furrier had sold 29,000 platypus skins,” Hawke says.

The animals continued to be seen in the same watersheds, with the exception of severe losses in South Australia. That’s why, in that state, the platypus is listed as endangered, but it’s not covered under any federal threatened species legislation.

Though it may seem surprising that such intense hunting didn’t seem to lead to drastic declines, Hawke says we weren’t getting the full picture.

For one, it’s hard to say how much a species has declined without a solid idea of how many animals there used to be. And rigorous research into platypus populations is spotty both geographically and historically. (Related: "Platypus genome reveals secrets of mammalian evolution.")

Part of that is logistical. “Platypus are notoriously difficult to study,” says Preston. They’re shy and nocturnal, so daytime surveys tend to miss them. And other methods for tracking species—like track or scat examination—don’t work because the animals spend most of their time in the water. (Explore the overlooked world of freshwater animals.)

Now, researchers are tapping into technologies like environmental DNA testing to pick up their presence in the water and acoustic tagging to follow their movements. There’s even an app called PlatypusSpot that allows citizen scientists to record sightings. But none of that can tell researchers what their populations were like before 1980—or 1780, for that matter.

For the study, Hawke and colleagues dug through 258 years’ worth of historical documents—over 11,000 records in all—to piece together what she could about the animals’ past numbers and distribution, and then compared that with all the modern data they could find, including reports of sightings through PlatypusSPOT.

Though she couldn’t calculate firm numbers from such variable data, the trend was clear—there are a lot fewer platypuses now than there once were. Places where, a century ago, a dozen or two of the animals could be caught in a day now yield less than a handful after exhaustive nighttime surveying, if researchers are lucky.

“For species like platypus, whose population declines happened before ecologists started studying them, these types of historical observations are extremely valuable,” says Loren McClenachan, a historical ecologist with Maine's Colby College who was not involved in the study. “It is an excellent use of historical data to understand the population dynamics of an iconic species.”

But not everyone agrees. Peter Temple-Smith and Frank Carrick are among a group of platypus researchers who think the historical sources are just too unreliable to make claims about past populations. They say more robust surveys are needed to determine if areas with fewer reported sightings really have fewer animals.

“Historical reports can be very important to understanding current ecology, but do require considerable care in interpretation,” says Carrick.

Bino agrees that it’s tough to reconcile such disparate types of data, but says the team’s goal was never to put some exact number on how much the animals have declined.

“There's value and merit in reporting old observations, even if they didn't follow any systematic surveys,” he says, and in this case especially, such work “highlights significant knowledge gaps.”

In general, though, experts are on the same page that platypuses are struggling and will continue to decline if nothing changes.

For instance, Hawke and colleagues are researching how large dams impact platypuses; if managed poorly, a single dam can essentially wipe out the platypuses living above and below it, according to their preliminary data.

Understanding the nuances of threats like this will help researchers determine the best ways to protect the animals. (Read more about threats to freshwater wildlife.)

“We are all concerned that it continues to be conserved as a flagship species for eastern Australian waterways after 160 million years of evolution—especially since it is the last extant species of its evolutionary line,” says Temple-Smith.

And the odd-looking creatures aren’t just loved by scientists.

“Everyone that you meet, they have this story about when they've seen a platypus in the wild,” says Preston. “And when they tell the story, they light up…[but] it’s becoming rarer and rarer for kids to have that.”