Neonicotinoids wiped out plankton and fish in a Japanese lake, and are likely harming aquatic ecosystems worldwide, new research suggests.

In May of 1993, rice farmers living near Lake Shinji, in southwestern Japan, began widely using an insecticide called imidacloprid.

Within the same year, populations of arthropods that form the base of the food web, such as crustaceans and zooplankton, began to plummet. By the end of 1994, two commercially important fish that depend on these creatures for food, eel and smelt, crashed as well. And as the use of imidacloprid and other neonicotinoids has grown over the years, the fish have never recovered.

These findings, from a paper published in Science in early November, are the first to show that neonicotinoids, a class of toxic insecticides that are the world’s most widely used, can seep into aquatic ecosystems and significantly disrupt fisheries, dramatically reducing their yields. What’s more, scientists think that Japan is not an isolated example, but rather a dramatic illustration of neonicotinoids’ potential to seriously harm aquatic ecosystems worldwide.

The situation at Lake Shinji is unique in that scientists have studied the fishery since at least the early 1980s—more than a decade before and after the insecticides were introduced. Such datasets are rare. Researchers at Shinji have logged reams of information about water quality, populations of arthropods and zooplankton, and the quantity of fish.

That allowed the study’s authors, led by Masumi Yamamuro, with the Geological Survey of Japan and the University of Tokyo, to find a clear connection between the introduction of neonicotinoids and the collapse of the food web.

When the scientists averaged populations of the lake’s zooplankton—tiny crustaceans and other animals eaten by fish—for 12 years before and after the introduction of neonicotinoids in 1993, they found that mean zooplankton biomass declined by 83 percent.

to a loss of zooplankton

in micrograms carbon per liter present

in water from Lake Shinji

Populations of smelt and eel 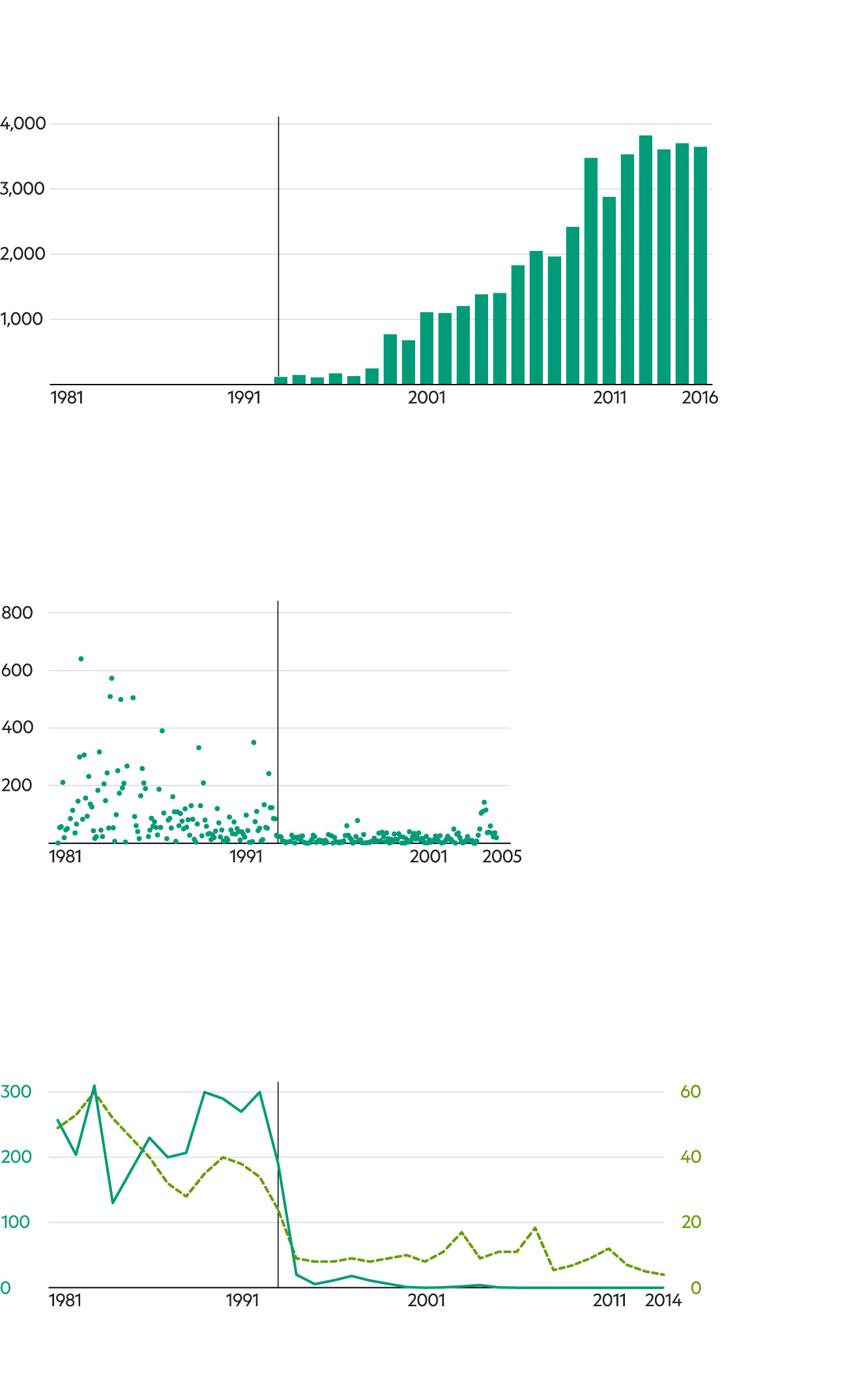 neonicotinoids in their rice paddies and agricultural fields.

Runoff containing neonicotinoids from fields and paddies was

linked to a dropoff of zooplankton biomass in Lake Shinji.

Monthly measurement of zooplankton in micrograms carbon per liter

present in water from Lake Shinji

Populations of commercial smelt and eel in Lake Shinji, which

were reliant on zooplankton and benthos as a source of food,

Tons of smelt and eel, caught annually in Lake Shinji

One type of midge larvae, known as Chironomus plumosus, could not be found at all in a 2016 survey. That came a shock to Yamamuro.

“I was so surprised,” she says. “In 1982, when I was an undergraduate student, there were tons of them.”

Darren Wallis, a spokesperson from Bayer Crop Science, into which Monsanto was folded when the two companies merged in 2018, disputed the clear link between neonicotinoid use and fishery collapse. Bayer is one of the largest producers of neonicotinoids.

“The strong conclusions made in the publication are clearly not supported,” says Wallis, since “it is well known that aquatic environments are dynamic systems that may be influenced by many physical and chemical variables.”

But six other researchers National Geographic interviewed, none of whom participated directly in the study, disagreed—and many were surprised by the strength of the link shown here.

“This study convincingly demonstrates that the decline of two major fish of commercial importance, smelt and eel, was caused by neonicotinoids, since none of the other possible factors that could affect fish changed over time,” says Francisco Sanchez-Bayo, an ecotoxicologist at the University of Sydney who wasn’t involved in the paper.

Though the study could only show a link between pesticide use and fishery collapse, the near-immediate decline of plankton and fish following neonicotinoid introduction is impossible to explain away, Sanchez-Bayo adds. For instance, a host of other potential causal factors has not significantly changed over the years, such as salinity, chlorinity, sediment content, dissolved oxygen, and other water quality measures.

Olaf Jensen, an expert on the impacts of aquatic pollutants at Rutgers University, likens the impacts of neonicotinoids to a continual major stressor. “The annual application of pesticides is a recurring environmental disturbance, like a mini-oil spill,” he says.

Neonicotinoids, commonly called neonics, were first produced on a large scale in the 1990s. These substances, which are chemically similar to nicotine, were hailed as safer alternatives to the industrial chemicals that they replaced since they are more selectively toxic to arthropods, and less deadly to large animals like mammals. The chemicals work by blocking receptors present in insects’ nervous systems, causing paralysis and death.

However, a growing body of research shows that the chemicals can have unintended consequences. They are fatal to several species of bees and butterflies, for example, and the three most commonly used neonicotinoids—imidacloprid, clothianidin, and thiamethoxam—have been banned for outdoor use in the European Union for this reason.

But the impact on freshwater and marine ecosystems has been studied far less, says Jason Hoverman, an aquatic ecologist at Purdue University.

“While neonicotinoid research has predominantly focused on terrestrial systems, this study suggests that adverse effects in aquatic systems are possible and occur by altering the food web,” Hoverman says.

These insecticides are systemic, absorbed by plants, and stored in their leaves and other tissues. The chemicals are often used to coat seeds; but these coatings are often washed off into the soil and exit as runoff. Neonicotinoid contamination of surface waters, like lakes and streams, is common around the world, studies show.

The paper suggests the regulators may need to rethink how they approve these chemicals, or what studies need to happen beforehand, suggests Dave Goulson, a biology professor at the University of Sussex in England who wrote a letter, along with 232 other signatories, arguing for more restrictions on the substances.

Generally, regulatory studies include short-term impacts on specific animals—but the indirect and long-term impacts, like those to the food web, are not studied, adds Rutgers’ Jensen, who wrote an analytical piece from his perspective accompanying the study in Science.

When researchers have looked, they have often found major problems with neonics. For example, a September study in Science found a link between neonicotinoid use and major impacts on birds, whose populations have been declining. (Read more: Huge decline in songbirds linked to common insecticide.)

This adds to a growing body of work that finds neonicotinoids can reduce populations of non-target insects, and that these chemicals are a contributor to the global decline in arthropods.

Yamamuro says that the impacts may be especially notable in Shinji because it is a brackish environment, with lower levels of species diversity than freshwater lakes—and thus more susceptible to harm from neonicotinoids.

“I think similar collapses may have occurred in other brackish environments, such as lagoons and upper estuaries in rice-culturing and neonicotinoid-using countries,” she says.

Pesticides are easily taken up and carried away by water in rice paddies, and Yamamuro says she expects the impacts from this type of agriculture to be particularly significant. However, since neonicotinoids are water soluble and persistent, the issue of contamination is a global one, she says, and likely to occur even in areas where neonics are applied to crops grown on dry land, like corn and soybeans.

“Neonicotinoids need to be much more tightly regulated,” says Nathan Donley, with the environmental group Center for Biological Diversity, who suggests that this paper is one more reason to invest much more heavily in research into non-chemical means of pest control, such as multiple cropping, the use of cover crops, and the like.

Purdue’s Hoverman agrees that “a perpetual challenge for society is balancing the need for food production with the environmental impacts of those activities.”

“Obviously, pesticides are designed to kill and, when applied to the landscape, will do their job. Investing in technologies that reduce our reliance on pesticides would reduce environmental impacts.”

The researchers closed out their paper by quoting Rachel Carson’s 1962 classic Silent Spring, about pesticides: “These sprays, dusts, and aerosols are now applied almost universally to farms, gardens, forests, and homes—nonselective chemicals that have the power to kill every insect, the ‘good’ and the ‘bad,’ to still the song of birds and the leaping of fish in the streams.”

Now, nearly 60 years later, they note, Carson’s words are eerily prescient. “The ecological and economic impact of neonicotinoids on the inland waters of Japan confirms Carson’s prophecy,” they conclude.