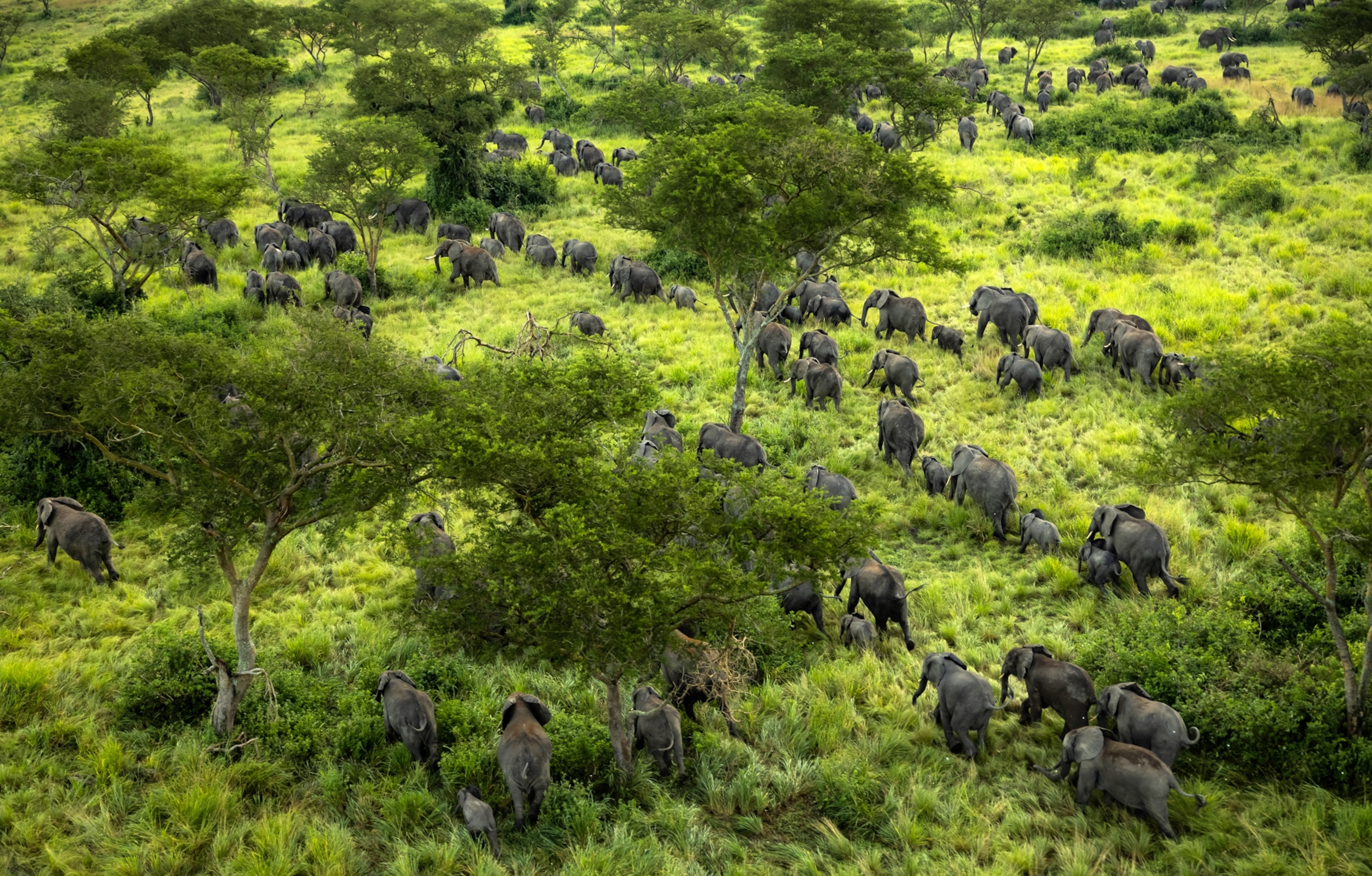 The appearance of nearly 600 elephants in Virunga National Park, in the DRC, suggests it's safer for wildlife than it once was.

Some of the nearly 600 elephants that recently arrived from Uganda move across the grassland in Virunga National Park. Until their arrival, Virunga’s elephant population hovered at about 120 because poaching and violence in recent years had killed or scared away many.

Savanna elephants have returned en masse to Virunga National Park, in the Democratic Republic of the Congo. It’s a development that has stunned park staff and signaled a turning point in Virunga’s quest for stability in a region beset by violence for decades. In August nearly 600 elephants crossed into Virunga from neighboring Uganda’s Queen Elizabeth National Park. More than six months later, they’re still there, suggesting they feel secure in their new home.

“There has been no greater expression of Virunga coming back to life,” says park director Emmanuel de Merode. “I arrived to the Congo 30 years ago, and I’ve never seen anything like this.”

A two-million-acre expanse of steppes, savannas, volcanoes, and snowfields along the DRC’s eastern border, Virunga is vulnerable to attacks by militia groups, poaching, hunting for bushmeat, unlicensed fishing, and illegal tree cutting for charcoal. More than 200 rangers have been killed protecting the park in the past 25 years, including 21 this year alone. In late February the Italian ambassador to the DRC was killed in a suspected kidnapping attempt near the park’s southern border. And de Merode himself was shot in 2014 in an attempted assassination.

This violence has had an inevitable effect on wildlife too. In the 1970s the Greater Virunga Landscape (which includes parks in Rwanda and Uganda) had the highest biomass of large mammals in the world, including its famous mountain gorillas and a thriving population of about 8,000 savanna elephants—highly perceptive and intelligent creatures that can weigh up to seven tons and live for 70 years.

But that population began to decline when the Rwandan genocide—closely followed by the First and Second Congo Wars—plunged the area into conflict in the 1990s. Some elephants fled to safer territory, and many fell to poachers, as impoverished locals and trafficking networks sought to profit off of the ivory tusks. In recent years, park officials estimated that just 120 elephants remained in Virunga.

“When there’s bullets flying through the air, whether it’s fighting between militias, or people targeting the elephants directly, they’ll pick up and move,” says Anne-Marie Weeden, a conservationist and founder of Uganda-based Petrichor Africa, which advises Africa’s wildlife and conservation sectors.

Then, last August, they came back.

The size of this herd, which de Merode and his colleagues have mostly ogled from a surveillance plane, is extraordinary, he says. Historically, small groups of elephants have shuffled back and forth between the parks, but in recent years, they’ve mostly stayed away. Now de Merode was able to look out the cockpit window and see elephants speckling the grasslands in every direction.

Hope in time of disease, violence

The elephants’ return has been a beacon of hope for the park, galvanizing the rangers at an otherwise demoralizing time. COVID-19, which came in the wake of a crushing Ebola outbreak, has pushed the already struggling communities surrounding Virunga into further economic despair. The result, de Merode says, has been a surge in violence as increasingly desperate locals are more likely to join militias.

In spite of this turmoil, Virunga’s staff has managed to prevent elephant poaching entirely since the new herd arrived. It’s a Sisyphean feat, given that the elephants have congregated largely in the turbulent Ishasha corridor, an area coveted by militia groups for its access to Lake Edward and its all-important fish.

In January six rangers were killed in an ambush nearby, likely in retaliation for new electric fencing that cut off the militia groups’ access to the lake, de Merode says. A month later the groups again clashed with rangers. De Merode, providing surveillance support from a plane above, watched nervously as 200 elephants scattered to escape the gunfire.

The newly returned elephants may also come into conflict with local communities, which could lead to retaliatory killings. After a pair of roaming elephants killed two farmers just outside the park, park officials said they’d extend the fence to keep the elephants away from human settlements.

De Merode says he’s convinced Virunga’s staff will be able to keep the community safe from elephants and the elephants safe from poachers. He expresses excitement for the changes the creatures might bring to the park. Elephants are voracious and destructive grazers, which can actually be beneficial to their habitats. When elephants barrel through a forest, they tend to knock down trees, which in turn leads to more intense seasonal wildfires, lower humidity in the soil, and therefore more nutritious grass.

Such dynamics will allow other grazers in the park such as warthogs, and antelope species like kobs and topi, to flourish as well, de Merode says. “Elephants could create a cycle that may one day bring us back to the highest large mammal biomass on Earth in Virunga.”