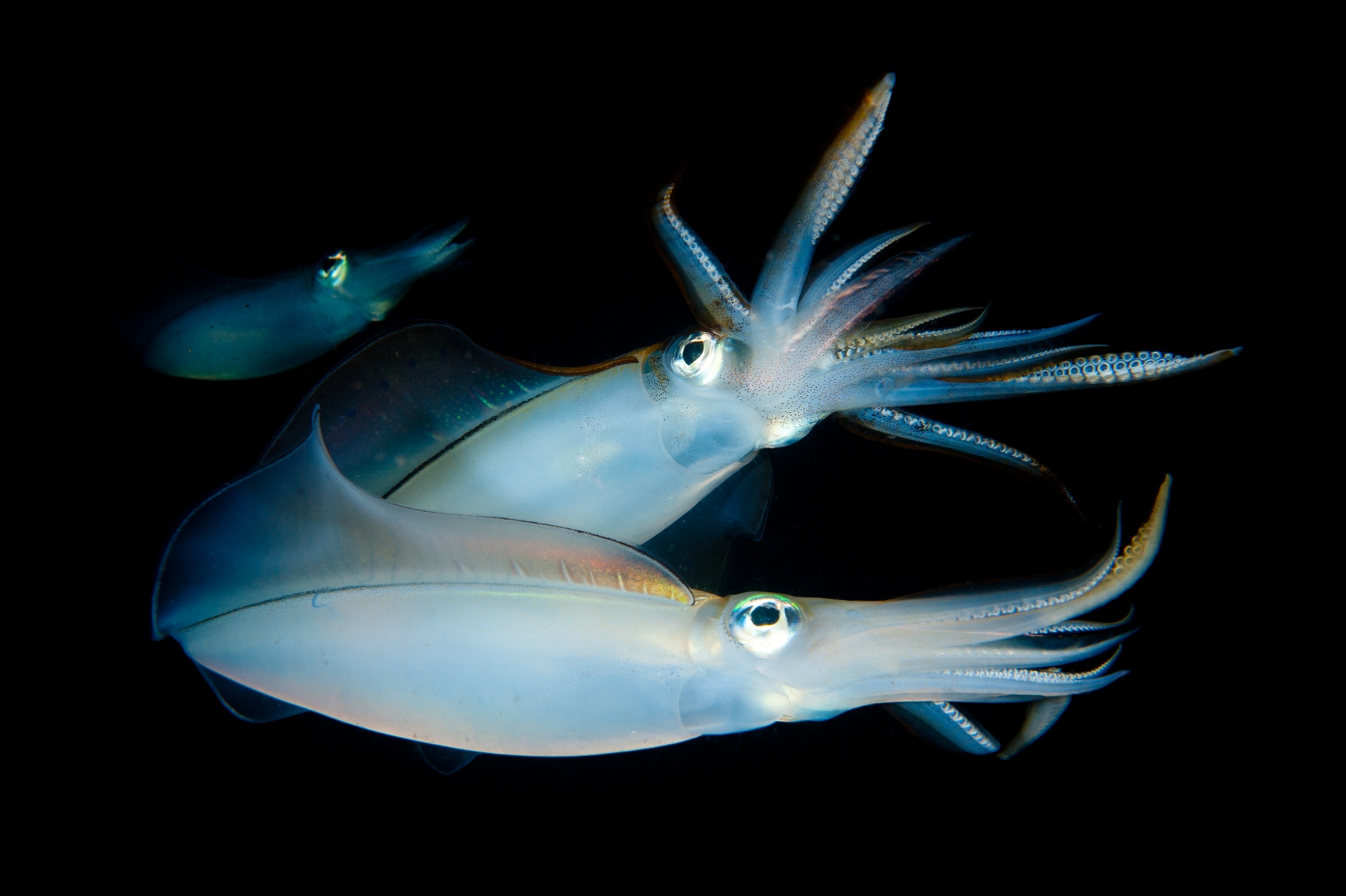 Bigfin reef squid may engage in paternal care, a practice more often seen in monogamous vertebrates, such as birds.

Squid are generally not thought to be doting parents—particularly males, which tend to mate and skedaddle. That’s why scientists were surprised to discover what could be the first evidence of paternal care in a small, glittery squid found throughout the world’s coral reefs called the bigfin reef squid.

Males of this species aggressively compete for females, and once a bigger male has mated with a female, he’ll usually stay close to prevent other males from mating with her. When the female is ready to lay her fertilized eggs, she’ll seek out a coral crevice protected from currents and predators and will lay eggs multiple times in the same place. The male will continue to guard her for a short time after she’s finished laying, and then move on, presumably to find other females to mate with.

But on recent dives in Egypt’s Red Sea, biologist Eduardo Sampaio observed something strange: A dominant male that had already paired with a female would scare off his rivals by waving his tentacles and making his skin flash white with black stripes. Then he’d briefly leave his mate unattended, swim into a potential egg-laying crevice, and emerge few seconds later.

Watch the male squid disappear into the crevice

“We weren’t sure what he was doing. It was something we’d never seen before,” says Sampaio, a Ph.D. student at the University of Lisbon in Portugal and the Max Planck Institute of Animal Behavior in Germany.

When he described this to Samantha Cheng, biodiversity scientist at the American Museum of Natural History in New York City, she said she’d recorded the same actions among male bigfin reef squid in Indonesia in 2013. Nonetheless, it had not been described before in the scientific literature about any squid, octopus, or other cephalopod. (Learn how another male squid species beat each other over females.)

In a new paper published in the journal Ecology, Sampaio and Cheng detail the behavior and explain their theory that it’s an example of paternal care—something never before seen in squid. “Location probing,” in which a male investigates a potential nest before the female lays her eggs, is common among monogamous species, but paternal care of any kind among cephalopods is extremely rare.

While the scientists say they don’t yet fully understand the phenomenon, this discovery could transform scientists’ understanding of squid reproduction. It shows that dynamics between males and female squid are “many-fold more complex than what we had previously thought. We have so much more to learn,” Sampaio says.

Squid males are invested in their genes

The scientists compared Cheng’s video footage from Indonesia to Sampaio’s from Egypt and were able to conclude the locating probing was intentional, not a random occurrence. They also noted that, in some instances, while the female was left unattended, other males snuck in and mated with her.

But why would the male leave his partner? Even a short absence gives other males a chance to mate with her. Leaving the female threatens his reproductive success, so the researchers figured there must be a very good reason for it.

Since the scientists haven’t observed what actually goes in the crevice, he could be “cleaning the area, making sure it's a good substrate to attach the eggs onto, checking there isn’t another male—or a predator— lurking there, and that it’s a safe location for the eggs,” Sampaio says.

All of this suggests that male bigfin reef squid are more invested in passing on their genes than previously believed. (Learn how squid are helping people unlock the mysteries of the brain.)

In squid—and in cephalopods in general—females typically care for the eggs until they hatch, cleaning them with their arms and providing oxygen by increasing waterflow around the eggs with their siphon and arms. The males play no role. In many species, the female dies after the eggs hatch.

Cephalopod expert Fernando Ángel Fernández-Álvarez, a postdoctoral research fellow at the Irish Research Council and National University of Ireland Galway, says he is equally surprised by the finding.

“I’ve never seen anything like this in cephalopods,” says Fernández-Álvarez, who was not involved in the study but believes the findings are sound. “These [dominant] males usually don’t go far from the female because another male could mate with her.”

What’s next for squid research?

The new study underscores the importance of studying more cephalopod mating in the wild, Fernández-Álvarez says.

“Most of what we know about this species’ behavior comes from aquarium studies,” he says, and it may be that those artificial environments are too simple for the animals to perform location probing.

Now, Sampaio and Cheng are reaching out to other scientists to find out if bigfin reef squid elsewhere in the world practice this mating behavior.

“The biggest challenge with studying species that live in such an expansive area is getting a comprehensive and representative sample. By joining forces with other scientists, we could pool time and resources for concerted collaboration on a global study,” Cheng says.

Regardless of what they find, it’s no doubt that squid—and likely other cephalopods—have more sophisticated mating lives than we ever imagined.

“The more we learn about squid,” Sampaio says, “the more we’re blown away by their complexities and quirks.”