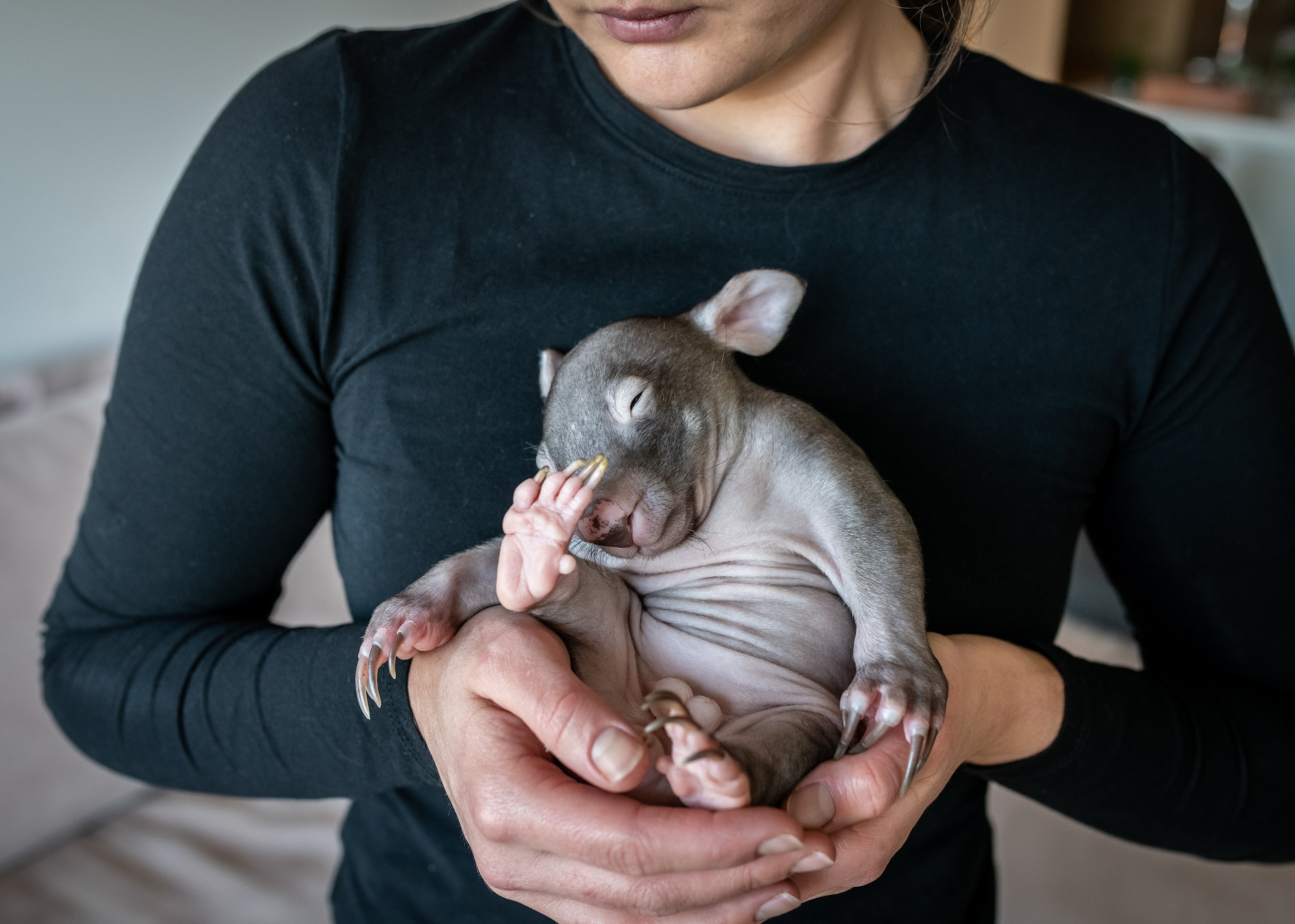 When the pandemic made travel difficult, a wildlife rehabilitator turned her apartment into a home for three rescued wombats.

Emily Small, founder of Goongerah Wombat Orphanage, holds Landon, a six-month-old orphaned wombat, in her living room. During Australia’s COVID-19 lockdown, Small was unable to make the 280-mile trek from her Melbourne apartment to the orphanage in Goongerah, so she’s caring for Landon and two other baby bare-nosed wombats at home.
Photograph by Doug Gimesy

It’s not uncommon to come across a wombat on the side of the road in Australia. It’s also not uncommon for Emily Small to take them in if they’re orphaned, sick, or injured, rehabilitating them in her wombat orphanage for release back into the wild.

What is uncommon, though, is Small spending her time during the COVID-19 lockdown in her Melbourne apartment with three orphaned bare-nosed wombats as roommates.

“How can having baby wombats around you not be good company?” she says.

In 2002, Small founded the Goongerah Wombat Orphanage, in East Gippsland, which she co-manages with her mother. They receive six to eight wombat joeys a year, usually orphans whose mothers were killed by cars.

She juggles her orphanage work with her full-time job as an operations supervisor at Wildlife Victoria, a wildlife rescue and advocacy nonprofit in Melbourne. The lockdown made the 280-mile trek from Preston, the north Melbourne suburb where she lives, to the orphanage in East Gippsland difficult, so Small opted to look after the wombats in her one-bedroom apartment.

Wombats, which are only about half an inch long at birth, are stocky, burrowing marsupials native to Australia and nearby islands. Unlike kangaroos, the female wombat’s pouch opens toward her rear end, so the joey doesn’t get a face full of dirt when she’s digging. Usually the joey won’t even peek out of the pouch for at least six months, and even after that, it’ll say put for another three or four months. Once it leaves the pouch, the joey will continue to stick by its mother until it’s a year old or more.

Caring for vulnerable wombats takes a lot of effort, Small says. They require nonstop attention, just like human children. And the pandemic makes it more difficult to secure the resources they need to thrive in an unusual environment. (Read about how marsupials are struggling after Australia's catasrophic bushfires.)

Each of the wombats Small took in has a distinctive personality. Landon, the youngest of the bunch, was rescued by a veterinary nurse at the end of March. He’s 10 months old.

"Landon is my little legend,” Small says. “He gets super excited. It just radiates off him and he can't control his energy, and then he’ll cry or scream because he's so happy. I actually haven't had one do that before.”

Bronson, the 11-month-old middle child, can be a tad more timid. A passerby found him in his dead mother’s pouch.

“He sometimes can't cope with normally comfortable wombat situations,” Small says, “He gets a little worried.” When he hears a new noise or enters a new environment, Bronson finds his way back to Small for reassurance and safety. But once he does get comfortable, she says he loves to “wiggle and snuggle.”

Year-old Beatrice is what Small calls “an independent warrior wombat.” She was also found in her mother’s pouch.

“Initially when she first came into care, she would launch, growl, and try to attack me,” Small says. “I knew it was out of fear as she came into care a little older. It means they have more awareness about threats, and she was trying to seem as scary as possible, which she was.”

Now that she’s gotten used to her new environment, Small considers her the “sweetest, gentlest orphan with a playful and trusting heart.” (Watch another wombat, George, bond with his caretaker New South Wales, Australia).

Care amid the coronavirus

In ordinary situations, Small says wombats can spend up to three years with their mothers in the wild.

“I try to replicate that bond as much as possible whilst responding to their individual needs and ensuring they have the necessary skills to be released," Small says.

In her top-floor apartment, Small did her best to recreate the outdoor enclosures the wombats typically live in. They need access to grass and dirt, which have nutrients that keep their guts healthy, so Small brought some home from the orphanage. She grows and tends to it in a planter box on her balcony, along with bark and sticks for the young wombats to chew on, but she says cleaning the area is “a bit of an issue.”

Feeding the joeys presents difficulties as well. The trio requires bottle-feeding with specialized formula, which is hard to come by because of the pandemic. “I'm actually waiting on 15 kilos of it,” Small says. “The post has just been backed up and not functioning at all.”

Despite the challenges, each little wombat has progressed well, she says. And just as they have different personalities, they have different needs. “Some will be ready to move to the next stage a lot quicker than the others,” she says. “It's totally up to them.” She says when they start showing “mature behavior,” such as normal wild wombat aggression, defensiveness, or fear, they’re probably ready to move to the next stage.

At that point, Small will put them in outdoor enclosures at the orphanage and wean them off bottle feeding. When they weigh between 35 and 55 pounds, at about 18 months old, she’ll release them back into the wild.

Unfortunately, rehabilitation doesn’t always work—some wombats don’t recover. In fact, the first wombat Small and her mother ever cared for died. “He was like my brother. My mom would feed him over me,” she says.

When he died, the pair vowed they would never take in another orphan. But that didn’t last long. “We've said that every year, and they just keep arriving. We can't say no,” Small says. (Need more cuteness? Check out these photos of rescued baby sloths in Costa Rica.)


“When they're happy and when they're playing, it's the best thing that I’ve been exposed to,” she says. “Anyone who can't smile or laugh at them when they're doing that can’t be human.”