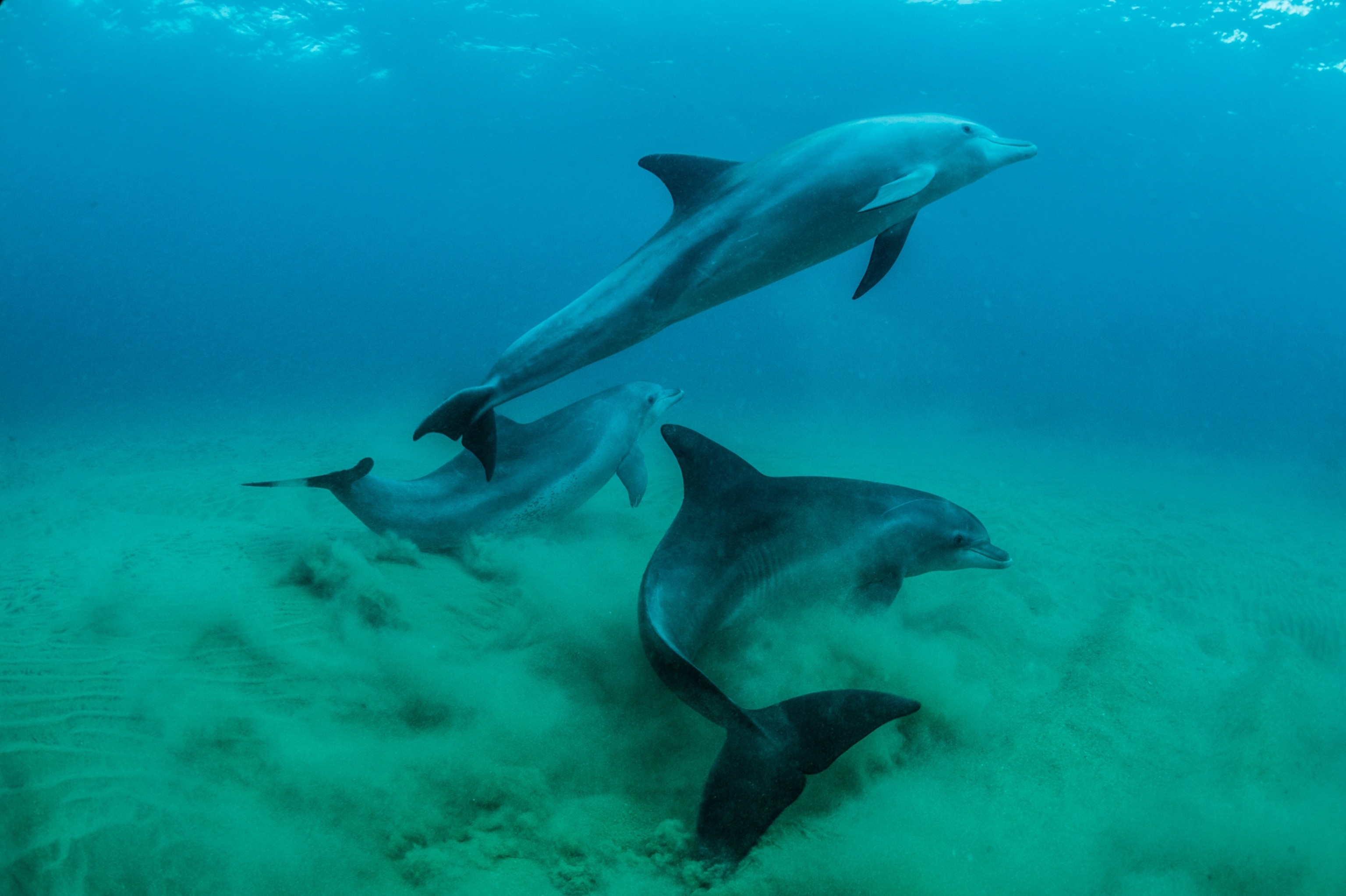 How dolphins use tools, teamwork, and trickery to get their dinner

From corralling fish in a ring of mud to protecting their noses with sponges, these marine mammals are ingenious foragers.

There’s no question dolphins are incredibly smart. But how they use their intelligence to survive continues to astound marine biologists, who discover new and fascinating behaviors every year.

There are 36 known dolphin species, from the 110-pound Maui’s dolphin to the motorhome-size orca, and all face the same struggle: How to catch food with no limbs?

One of the most studied species, the common bottlenose dolphin, has evolved an impressive suite of hunting strategies, such as mud-ring feeding. With a few strong flicks of their tail and a circular swimming motion, these predators corral a school of fish within a tornado of mud. To the fish, the plume looks like an impenetrable wall, which causes them to panic and try to jump over the barrier at the water’s surface. Unfortunately for them, that’s where other hungry dolphins wait with open jaws. (Watch dolphins catch fish using a ‘net’ of mud.)

Until recently, mud-ring feeding was thought to be unique to just a few populations of bottlenose dolphins living in Florida. But a recent study published in the journal Marine Mammal Science proves that the behavior is more widespread than previously thought, and has been confirmed in Belize and Mexico, says study leader Eric Ramos, a marine biologist at the City University of New York.

While it’s technically possible that a mud-ring-feeding dolphin brought the behavior from Florida to the Caribbean, or vice versa, Ramos thinks that explanation unlikely. Instead, he believes separate dolphin populations living in similar habitats innovated the same strategy independently.

“Either way, it’s really cool,” says Ramos—and it’s just one of the many clever ways dolphins have learned to survive.

Strand feeding: the most dangerous game

For a marine mammal, it’s perilous to get too close to the shore, where the animal could get stranded and die. However, some dolphin species willingly take the risk by chasing fish up onto the beach—and then gulping them down before wriggling back into the wake.

In fact, Mann says that one of the most prominent “beacher” dolphins, a female named Jamaica, actually showed up with burn marks a couple of years ago, likely caused by prolonged exposure to the sun after getting stuck on shore.

Strand feeding, or beaching, is another rare strategy known from only a handful of places, such as South Carolina and Shark Bay. “It’s a really interesting behavior, because there are only a few animals that do it,” says Mann. (Read how dolphins have bold and shy personalities, like us.)

Kerplunking: playing with your food

When a dolphin slaps its fluke, or tail, on the surface of the water, it might seem like a toddler playing in a bathtub. But this is actually a deadly serious hunting behavior.

Depending on where they live in the world, the dolphins may be using their tail to stun fish and even skyrocket them into the air before moving in for the kill. This is known as fish-kicking or fish-whacking. (See dolphins punt fish out of water to stun and eat them.)

Some Australian bottlenose populations perform a maneuver in which they smack octopuses off the water in an attempt to disarm the suction-footed cephalopods before devouring them.

Other times, a dolphin’s thwack may serve another purpose. Some dolphins in Australia's Shark Bay will wallop the water’s surface while foraging with their noses in seagrass below—perhaps as a way to scare fish out of hiding. Scientists have nicknamed the behavior kerplunking.

Many animals work together to tackle prey, as dolphins do when they engage in mud-ring feeding. But very few tag-team with humans to do it.

In Laguna, Brazil, common bottlenose dolphins herd fish toward the shore where fishermen stand waiting. With water up to their chests and their hands full of line, the fishers cast their nets at the precise moment when the dolphins approach.

“The benefits for the fishers is they clearly catch much more and sometimes larger mullet fish when they follow the dolphins’ cues,” says Mauricio Cantor, a behavioral ecologist at Oregon State University. “Especially because the water can be very murky, so you simply cannot see where the fish are.”

Of course, the dolphins can “see” them just fine using their built-in sonar, called echolocation. And they benefit too, says Cantor, because the fishers and their nets act like a barrier that they can drive the fish against. It’s so successful, there are records of such teamwork going back around 120 years in Brazil.

Sponging and shelling: tools of the trade

Since the 1980s, researchers have followed a few dozen dolphins in Shark Bay that practice the art of “sponging,” an example of tool use. (Explore our interactive of how animals wield tools.)

This occurs when a dolphin plucks a sponge from the seafloor and pushes the soft animal onto its nose, likely as protection while it plows along the rocky seafloor in search of fish. Sponging also allows the predators to scare up small fish that can hide from the predators’ natural sonar.

Sponging is more than a hobby, Mann says: It makes dolphins culturally distinct from their neighbors, according to her research.

“Spongers really do stand out as being more solitary and less sociable,” she says. And when they do socialize, spongers tend to form cliques with other spongers. Most interesting of all, she says, is that sponging seems to be passed down from mothers to daughters. “One of the females who was discovered in 1984 is still sponging,” says Mann. “She is 37 years old.”

Even less common is a behavior known as “shelling,” in which an individual will chase a fish into an empty conch shell. (Read how Indo-Pacific bottlenose dolphins prepare a cuttlefish “recipe.”)

“The dolphins put their mouth into the opening of the shell, bring it up to the surface, and then shake it so that the fish basically falls into their open mouth,” says Sonja Wild, a behavioral ecologist at the University of Konstanz in Germany, who led a study about shelling among Shark Bay dolphins in 2020.

Curiously, shelling behavior is transmitted horizontally, while sponging is only learned vertically. In other words, dolphins can learn to shell from their friends, but sponging is kept within the family.

“Technology is letting us access things that we could never see before.”