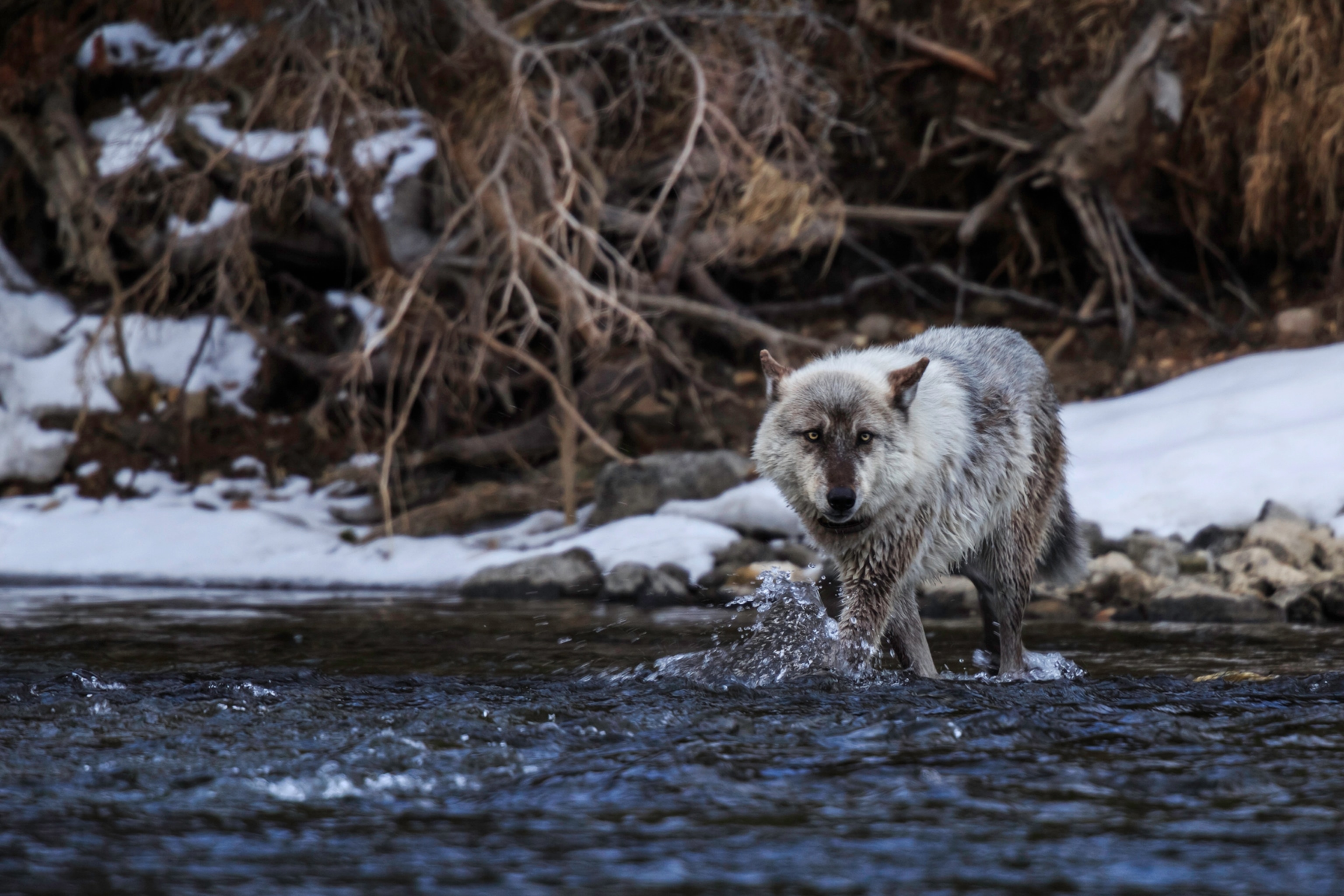 From ‘Tiger King’ prosecutions to new pangolin protections, not everything in 2020 has been doom and gloom.

In November, Colorado voters approved a measure to reintroduce gray wolves, hunted to extinction in the state more than 50 years ago.

No one would deny that 2020 has been exceptionally tough. The coronavirus has killed more than a million people worldwide, indelibly changing families and communities. In many ways, animals haven’t fared well, either: The Chinese government promoted bear bile as a coronavirus treatment, poaching surged as COVID-19 lockdowns brought ecotourism to a standstill, and captive wildlife—including tigers at the Bronx Zoo and mink in Denmark fur farms—tested positive for the virus. (To help protect humans from a variant of the coronavirus found in mink, the Danish government ordered the country’s more than 15 million mink living on fur farms to be killed. They weren’t buried deeply enough, however, and as the bodies decomposed, “zombie” mink started breaking out at the surface.)

1. Wildlife have benefited from some of our pandemic-induced lifestyle changes. The coronavirus, with early human spread linked to a wet market in Wuhan, China, has focused attention on the global wildlife trade, causing many to rethink the way we interact with wild animals. In February, the Chinese government issued a decision that lays the groundwork for criminalizing use of wildlife as food.

By forcing people to stay home, the pandemic has spurred reconnections with nature. Citizen science websites, which encourage non-scientists to observe and report their surroundings, have seen an uptick in data, providing valuable insights for conservation projects. SciStarter, for example, connects citizen scientists with active research projects and has seen a 480-percent increase in data contributions since 2019. These resources can be troves for researchers—especially for those who have had to pause their fieldwork during the pandemic.

In March and April in the United States, road traffic decreased by as much as 73 percent, and fatal collisions with wild animals such as deer, elk, bears, and mountain lions fell by up to 58 percent. Fraser Shilling, co-director of the University of California, Davis, Road Ecology Center, predicted that 50 percent less traffic over a year would mean “500 million vertebrates that aren’t killed on roads and highways. It’s certainly not a small thing for wildlife.” (Read more of National Geographic’s coronavirus coverage.)

2. Owners of problematic private zoos in the U.S. faced legal repercussions. A spate of legal actions this year underscores the lack of regulation in the captive tiger industry and some of the abuse these animals suffer in roadside zoos and as pets. At the beginning of 2020—even before Netflix’s Tiger King took off—Joseph Maldonado-Passage, better known as Joe Exotic, was sentenced to a 22-year prison sentence for crimes including plotting to murder Carole Baskin, shooting and killing five tigers, and illegally selling tigers across state lines. Other prominent private zoo operators featured in the Netflix show, Bhagavan "Doc" Antle and Tim Stark, also faced legal troubles. And Jeff Lowe, the owner of what was formerly Joe Exotic’s Greater Wynnewood Exotic Animal Park, in Oklahoma, lost his license to exhibit animals to the public. Now, Lowe and his wife, Lauren, also face civil charges and a court order to halt any attempts to show their animals online or in social media. (Learn more about what Tiger King left out.)

3. Black conservationists celebrated their love of wildlife during the first-ever Black Birders Week. The movement began after an incident in New York City’s Central Park, when a white woman called the police after a Black bird watcher named Christian Cooper asked her to leash her dog. Four days later, biology graduate student Corina Newsome posted a video on Twitter, saying, “For far too long, Black people in the United States have been shown that outdoor exploration activities such as birding are not for us—whether it be because of the way the media chooses to present who is the ‘outdoorsy’ type, or the racism experienced by Black people when we do explore the outdoors, as we saw recently in Central Park. Well, we’ve decided to change that narrative.” Newsome co-organized Black Birders Week, which included five days of virtual events and aimed to boost the visibility of Black scientists and nature enthusiasts in a white-dominated birding community.

4. Pangolins, the world’s most trafficked non-human mammal, got two key protections in China. In June, Beijing gave pangolins the highest level of protection under the country’s wildlife law. This designation prohibits almost all domestic trade and use of pangolins. China, one of the biggest consumers of pangolin scales, also removed the animal from its official list of approved traditional medicine ingredients—a shift animal welfare groups said likely will significantly dampen demand. Though loopholes remain, their body parts can no longer be used as raw ingredients. More than 128 tons of pangolin scales and meat were intercepted worldwide last year—an all-time high—indicating that despite a global ban on commercial trade in these scaly mammals, the market for pangolin body parts for traditional Chinese medicine and luxury meat is still booming.

5. Suspected members of an alleged flying squirrel smuggling ring were apprehended. In Florida, law enforcement officers broke up what they believe to be the U.S.’s—and perhaps the world’s—largest flying squirrel trafficking ring, leading to multiple arrests. Thousands of southern flying squirrels have been taken from the woods in recent years, according to Florida authorities, and shipped to a South Korean buyer, who allegedly sells them into the pet trade. (Read National Geographic’s deep-dive into this wild investigation, and learn how GPS trackers, cell tower triangulation, and confidential informants helped law enforcement unravel the case.)

6. A new effort was launched to combat an invasive species. The U.S. intensified efforts to block illegal importation of one of the world’s most invasive species: Chinese mitten crabs, which are considered a delicacy. Officials say they’ve seized nearly 15,000 of the live animals from various ports since late 2019. “If the crabs were to escape into the wild and multiply, the implications would be profound,” the U.S. Fish and Wildlife Service’s Eva Lara-Figuerdo told National Geographic earlier this year. They could damage riverbanks with their tunneling, threaten food chains by consuming local wildlife, and possibly sicken humans—they’re known to transmit a parasite that attacks the lungs.

7. Retired circus elephants will begin a new chapter. In September, conservationists announced the retired performing elephants of Ringling Bros. and Barnum & Bailey Circus will move to a 2,500-acre conservation center in Florida next year. White Oak Conservation, which bought the 35 Asian elephants, says its new facility will house the largest collection of Asian elephants in the Western Hemisphere. “It is a chance for us to let them return to just being elephants in a situation that is as close to the wild as we can make,” Michelle Gadd, who leads global conservation efforts for White Oak’s wildlife philanthropic arm, told National Geographic earlier this year.

8. Tasmanian devils returned to mainland Australia for the first time in millennia. These marsupials disappeared from the continent 3,000 years ago, likely because Indigenous hunters killed off most of the Australia’s large mammals, on whose remains they’d scavenge. Restricted to the island state of Tasmania, the population of Tasmanian devils dropped to 25,000 in the 1990s after the spread of a contagious and deadly facial cancer. In March and September, just over two dozen were taken to a thousand-acre fenced wildlife sanctuary in eastern Australia and are now running wild, adjusting to their ancestral homeland. “They’re free. They’re out there,” Tim Faulkner, president of the species recovery organization AussieArk, told National Geographic at the time. “Now it’s over to the devils to do what they do.” Because Tasmanian devils are scavengers, they play an important role in maintaining a healthy ecosystem, and scientists hope they can help restore balance in areas ravaged by invasive species such as feral cats and red foxes.

9. Rare global cooperation led to a crackdown on wildlife smuggling. Between September and October, global law enforcement bodies and wildlife officials seized thousands of wildlife products as part of Operation Thunder 2020. Included in the contraband were scales representing some 1,700 pangolins and 87 truckloads of timber. Live animals were also recovered, including more than 30 chimpanzees and 1,800 reptiles. The effort, led by Interpol and the World Customs Organization, involved more than a hundred countries and was the fourth annual operation of its kind. Such coordinated actions can bolster countries’ capabilities and are important because “many illegal wildlife products slip through either completely undetected or laundered as legal products with false permits and other paperwork,” says Rebecca Regnery, senior director for wildlife at Humane Society International. When countries partner like this, she says, they can better identify repeat offenders and compare documents to ensure their validity. (Learn more about the related 2019 effort.)

10. Gray wolves will be reintroduced in Colorado. In November, voters narrowly approved a ballot measure to bring gray wolves back in the southern Rocky Mountains, where they were hunted to extinction in the 1940s. This is the first time a state has voted to reintroduce an animal into its ecosystems, and the Colorado Parks and Wildlife department will supervise the project, beginning in 2022 or 2023. Biologists estimate that Colorado can support hundreds of wolves. Wolves can help reduce overgrazing and the erosion it causes by preying on deer and elk, and the remains of their hunts provide food for scavengers such as wolverines, eagles, and bears. “Reintroducing wolves will restore Colorado’s natural balance,” said Jonathan Proctor, a conservationist with the nonprofit Defenders of Wildlife, which helped pass the measure. (Read more about the federal government’s controversial decision to remove gray wolves from the Endangered Species List.)