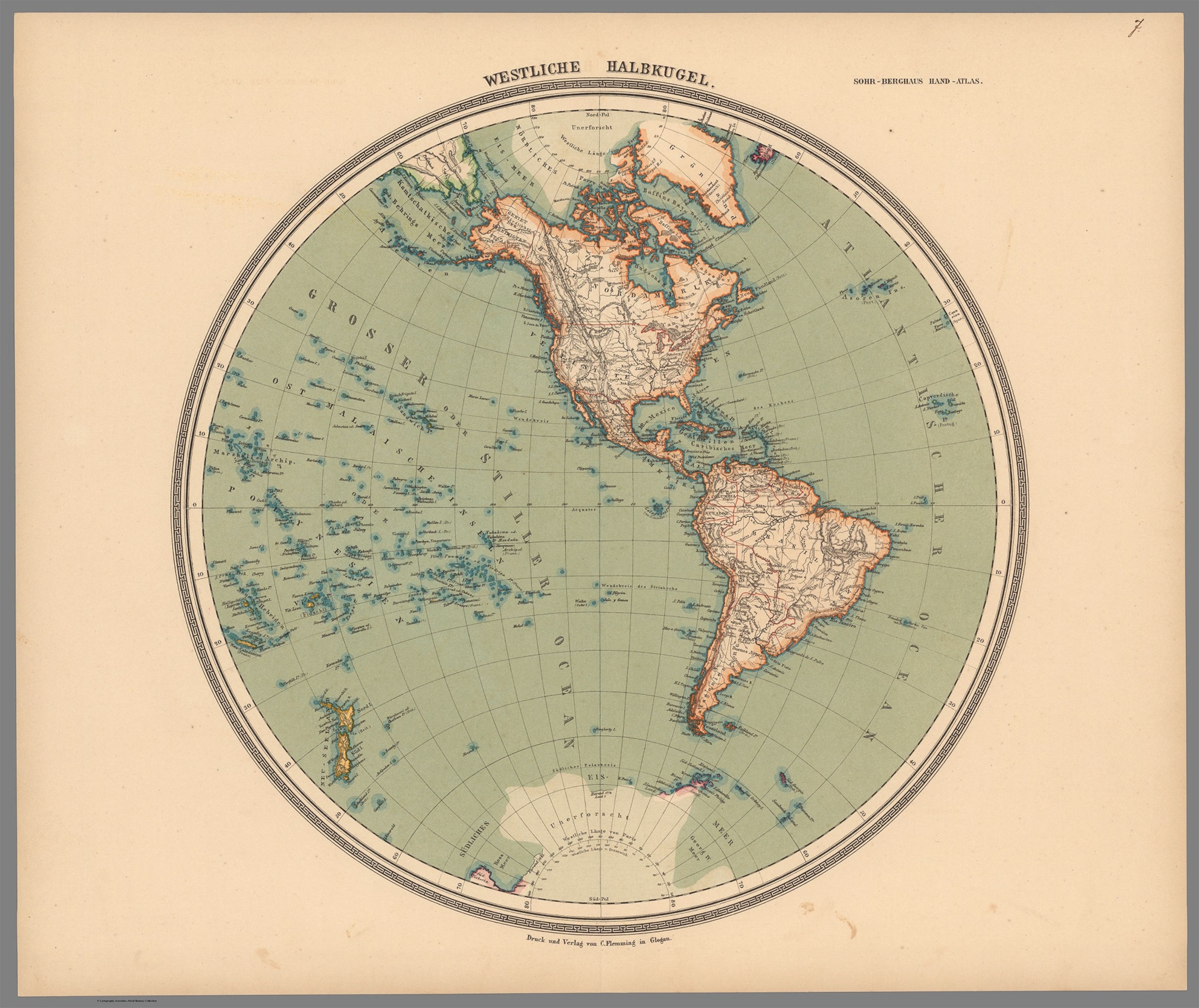 Why your mental map of the world is (probably) wrong

These are some of the most common geographic misconceptions that are both surprising and surprisingly hard to correct.

Contrary to the map many of us have in our minds, almost all of South America is farther east than North America.
Courtesy David Rumsey Map Collection

Most of us have a rough map of the world in our minds that we use any time we think about places. But these mental maps aren’t necessarily reliable. In fact, many of the maps in our heads share the same errors, some of which are quite large—and surprisingly resistant to correction.

For instance, we all know that South America is south of North America, of course. But you may be surprised by the fact that virtually the entire South American continent is east of Florida. There are lots of possible reasons for geographical misconceptions like this one, says cartographer John Nelson. Mental maps are necessarily simplifications, and Nelson suspects the misplaced Americas may be partly a result of their names. After all, it’s not called Southeast America.

Nelson’s father, who was a geography professor at Central Michigan University, wrote a paper about geographical misconceptions in 1992 with some of his colleagues and input from Nelson’s mother, a high-school geography teacher. “I actually remember them talking about this research paper over dinners when I was younger,” Nelson says. He recently revisited the paper and put together a story map that highlights three common misplacements mentioned in the paper, including the true longitudinal relationship between the Americas.

Another commonly misplaced continent is Africa. North Americans tend to think of Africa as a located almost entirely in the southern hemisphere, similar to South America. But in reality, around two-thirds of Africa is north of the equator. “Africa actually extends northward to about the same latitude as Norfolk, Virginia,” the paper’s authors write.

Europe is also often placed much farther south on mental maps than it really is, appearing directly across the Atlantic from the contiguous United States. But it actually lines up better with Canada: Paris is further north than Montreal, Barcelona is at a similar latitude as Chicago, and Venice lines up with Portland, Oregon.

Nelson suspects that climate might play a role in this misconception. Western Europe is relatively warm for its latitude thanks to the Gulf Stream, which brings warmer water from the Gulf of Mexico across the Atlantic and gives Europe its so-called Mediterranean climate. The warmer temperatures are more similar to the climate of the lower 48 states than Canada’s.

People also tend to keep their mental maps simple by aligning them with the four cardinal directions, according to the paper’s authors. So it’s easier for North Americans to think of Europe as due east and South America as due south.

Locations aren’t the only way our mental maps can be wrong; we also have misconceptions about the relative size of things. This may be due in part to the nature of two-dimensional maps. Flattening a three-dimensional globe onto a flat surface isn’t possible without some distortion. This is especially obvious for maps that use certain projections—ways of representing the Earth’s curved surface on a flat map—such as the popular Mercator projection, which could be found on many 20th-century classroom walls.

Mercator maps distort the shape and relative size of continents, particularly near the poles. This is why Greenland appears to be similar in size to all of South America on Mercator maps, when in fact South America is more than eight times larger than Greenland.

While you may have already been aware of Greenland’s extreme exaggeration on some maps, other inconsistencies are more surprising. For example, Brazil isn’t that impressive on many maps, but in reality it’s bigger than the entire contiguous United States and almost as large as Canada. And Alaska, which is a giant on Mercator maps, is actually a little smaller than Libya.

Thinking about the world in two-dimensions also distorts our ideas about how to get from one place to another, says geographer Anthony Robinson of Penn State University. If you draw a line on a flat map from Washington D.C. to Shanghai, China, the most direct route appears to be due west over the United States and the Pacific Ocean. But Robinson says he’s been on plenty of flights to Asia where people are surprised to hear the pilot say they’ll be flying over the North Pole. When looking at a globe instead of a flat map, it makes sense. “That's far and away the shortest way to get there,” Robinson says.

The Persistence of Memory

None of these geographic misconceptions would be surprising for a student to have on the first day of geography class, but even once we’ve learned the truth, the errors on our mental maps tend to persist. One reason for this may be that our conceptions of the world are basically summaries of the geography, says cartographer Dylan Moriarty, who is an interactive designer at the Wall Street Journal. The mental map is a simplification, similar to the the subway map of New York City, he says. “The approximation is just more useful and practical.”

Our physical experience of the world may come into play as well, Robinson says. “I think it must have something to do with both the limits of our observable perception of space and time, and the fact that we are disrupting that constantly with technology and methods of transportation and things that compress those things and make them nonfactors.”

Whatever the reason, these mental map errors are so pervasive and stubborn that even professionals have them. A 1985 study of mental world maps found that geographers had the same misconceptions of the relative latitude of cities in North America and Europe as everyone else. Cartographers aren’t immune either. The “eastiness” of South America still surprises Nelson sometimes. “I really have to look again at a map and be like, is that really the case?” he says. “And sure enough it is.”

Please be respectful of copyright. Unauthorized use is prohibited.
Betsy Mason and Greg Miller are authors of the new illustrated book from National Geographic, All Over the Map . Follow the blog on Twitter and Instagram.