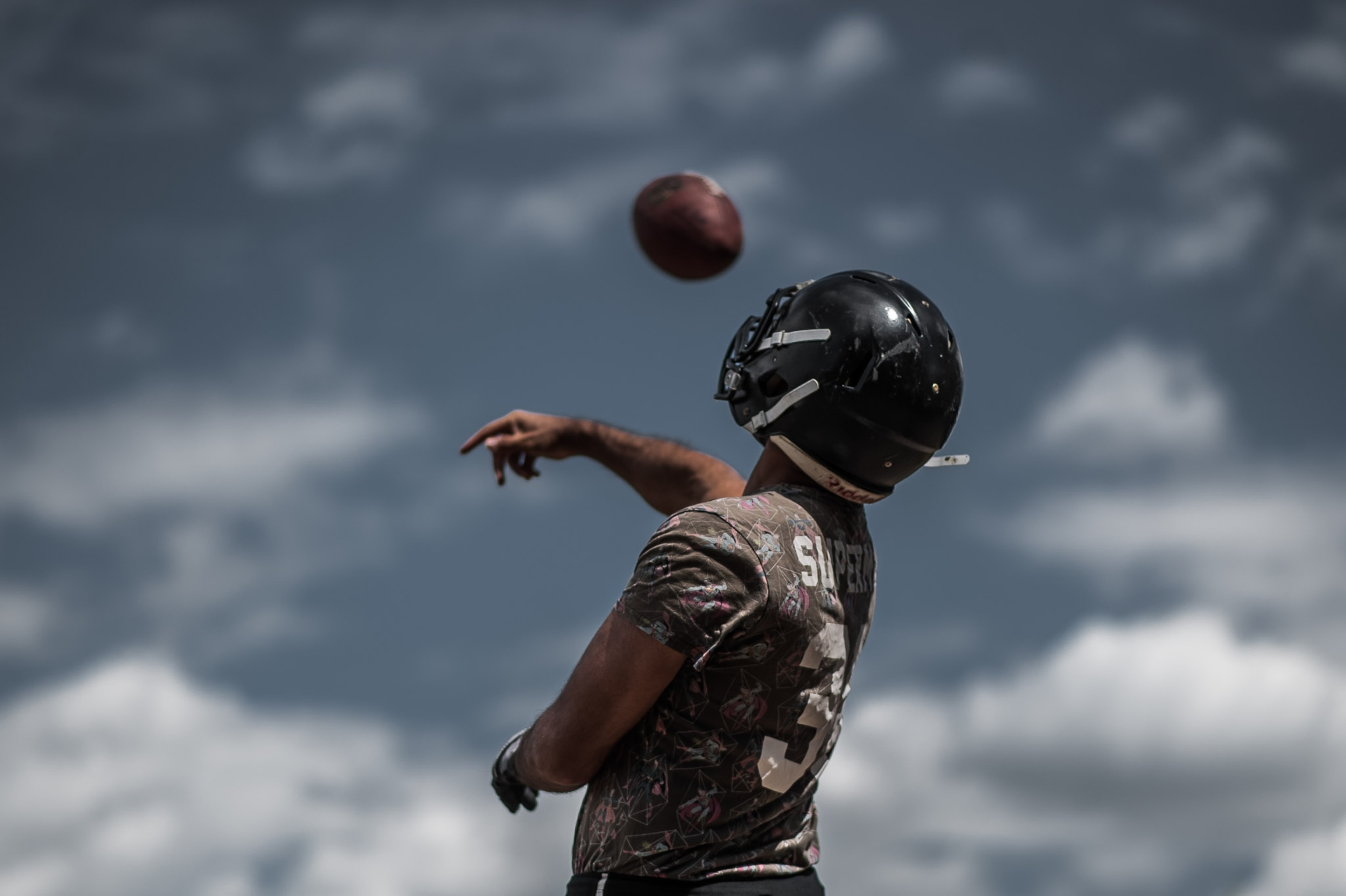 Gridiron action in the European country requires resourcefulness and plenty of patience with those unfamiliar with the sport.

Quarterback Seifadin Almazov practices with the Poltava Panthers, one of more than a dozen teams in the Ukrainian League of American Football.

The opening minutes of the first football game of the 2021 season would feel familiar to most Americans: Coaches pacing the freshly painted sidelines with nervous energy, muscular young men on the field in pads and helmets, and even a complement of cheerleaders jangling red pom-poms. Meanwhile, a gray sky threatened to unleash a downpour, suspending play and dashing the hopes of players and spectators alike. The only difference—granted, a big one—were the teams: The Lviv Lions and the Vinnytsia Wolves, facing off on a field behind a cluster of industrial buildings in the Lion’s hometown in western Ukraine.

American football is usually thought of as a uniquely national sport, with little presence in other countries. But after a year of COVID-19 lockdowns, a devoted community of Ukrainian amateur athletes—mostly men, but also some women—are resuming their passion, and expanding awareness of the game, one frenzied play at a time.

Football came to Ukraine in the early 1990s, most knowledgeable Ukrainians say, in the waning years of the Soviet Union and dawn of the county’s independence. An influx of Westerners arrived in the country to seek new opportunities, and the Americans among them brought their footballs, says Alfie Williams, head coach of the Kyiv Patriots, one of the Ukrainian capital’s three teams.

Before COVID-19 shut down most group activities in the country last year, Ukrainian football teams faced off in more than a dozen teams in two recreational divisions of the Ukrainian League of American Football (ULAF), formed in 2016 after an earlier league disbanded. (Similar organizations to the ULAF exist in Europe and elsewhere, notably in Germany, which has seven leagues and sprang from the presence of U.S. servicemen in the country after World War II.)

Williams, a football diehard and D.C. native, has coached football in Ukraine since relocating to Kyiv in 2015 to work as a technology professional. Soon after arriving, he discovered local pigskin players and teams through friends at the gym.

Once on the field, “I saw a lot of things being done wrong,” Williams says of his early coaching days. He describes the challenge of finding local players with the right body type for certain positions, such as offensive linemen, who on U.S. teams are prized for their bulk and often weigh more than 300 pounds.

Local team prospects, however, featured a lot of “super-fit guys,” Williams says, which reflected traditional 20th-century notions of what a Ukrainian athlete should look like.

“There’s some Soviet stuff you just can’t shake,” he adds.

Since football’s modest beginnings in the last days of the Soviet Union, the sport’s Ukrainian presence has grown substantially. The ULAF’s top “super league” counts eight teams, four in the country’s north and four in the south, while another eight teams play in the lower division.

Williams estimates that the ULAF has about 400 male and female players in total. And youth play is growing, with four kids’ teams now active, says Oleksii Zorin, a longtime Ukrainian player currently with the Kyiv Patriots.

“Do you mean rugby?”

Playing American football in Ukraine requires resourcefulness and plenty of patience with those unfamiliar with the sport. “When I say that I play American football, people often respond with, ‘Do you mean rugby?’” explains Ihor Meluhnov, 34, a member of the Poltava Panthers, based in the city of Poltava in central Ukraine, who started playing three years ago.

“The main reaction is surprise that there is such a thing in Ukraine,” Meluhnov says.

One of the biggest challenges for Ukrainian players is procuring the right equipment. A full set of protective gear—including delivery to Ukraine—can cost as much as $500 (U.S.), says Dale Heffron, another American citizen who moved from Florida to retire in Ukraine, in part to coach football, and who now helps lead the Vinnytsia Wolves. “That’s a lot of money for most Ukrainians,” Heffron notes.

To fund their passion, the players and coaches search the internet for cheaper, often second-hand equipment, usually from other European players. The Ukrainian teams usually pay from their own pockets or tap sponsors, such as local businesses, to provide the resources needed to get to the line of scrimmage.

In Heffron’s case, he met the Vinnytsia Wolves’ sponsor, a Ukrainian solar energy company called Kness, while he was teaching English to the company’s employees. Heffron’s three-a-week lessons put him in front of the Kness CEO. A friendship—and a sponsorship—was born.

All Ukrainian football championships and matches are self-funded by club leaders or players, which only deepens the commitment they make to the sport and their teams, says Kyiv Patriot’s player Zorin.

Despite the physical and financial dedication of Ukrainian footballers, Williams concedes that the cost, in money and in bodily risk, is considerable. That is especially true for the numerous players who work as professional trainers and in other physical jobs, and who depend on their good health to make a living and support their families.

“Some can afford it, and some can’t,” Williams says. “It’s tough to justify playing, maybe getting hurt, then having to go back to work Monday morning.”

American football is also growing among Ukrainian women, who play a pared-down form of the game that the sport’s fans know as flag football. Five women’s teams, each associated with a local men’s team, play currently.

“A friend of mine made me come to a practice,” says Kateryna Teteruk, 25, who has played the game for the past seven years on the women’s counterpart team to the Vinnytsia Wolves. “After that I could not leave football for another day.”

During the 2020 COVID-19 lockdown, Teteruk and her teammates kept in shape while eagerly awaiting the chance to play in-person games again. “We trained all winter,” mostly in the gym and other cross-training exercises, she says.

The men’s game between the Vinnytsia Wolves and Lviv Lions ended 7-6, with the Wolves carrying the day. While it was a low-scoring match by football standards, perhaps the most important victory came in simply taking the field again. Ukraine’s scene is returning, and that’s a state of play that a fan of American football—in Ukraine or anywhere else—can cheer for.