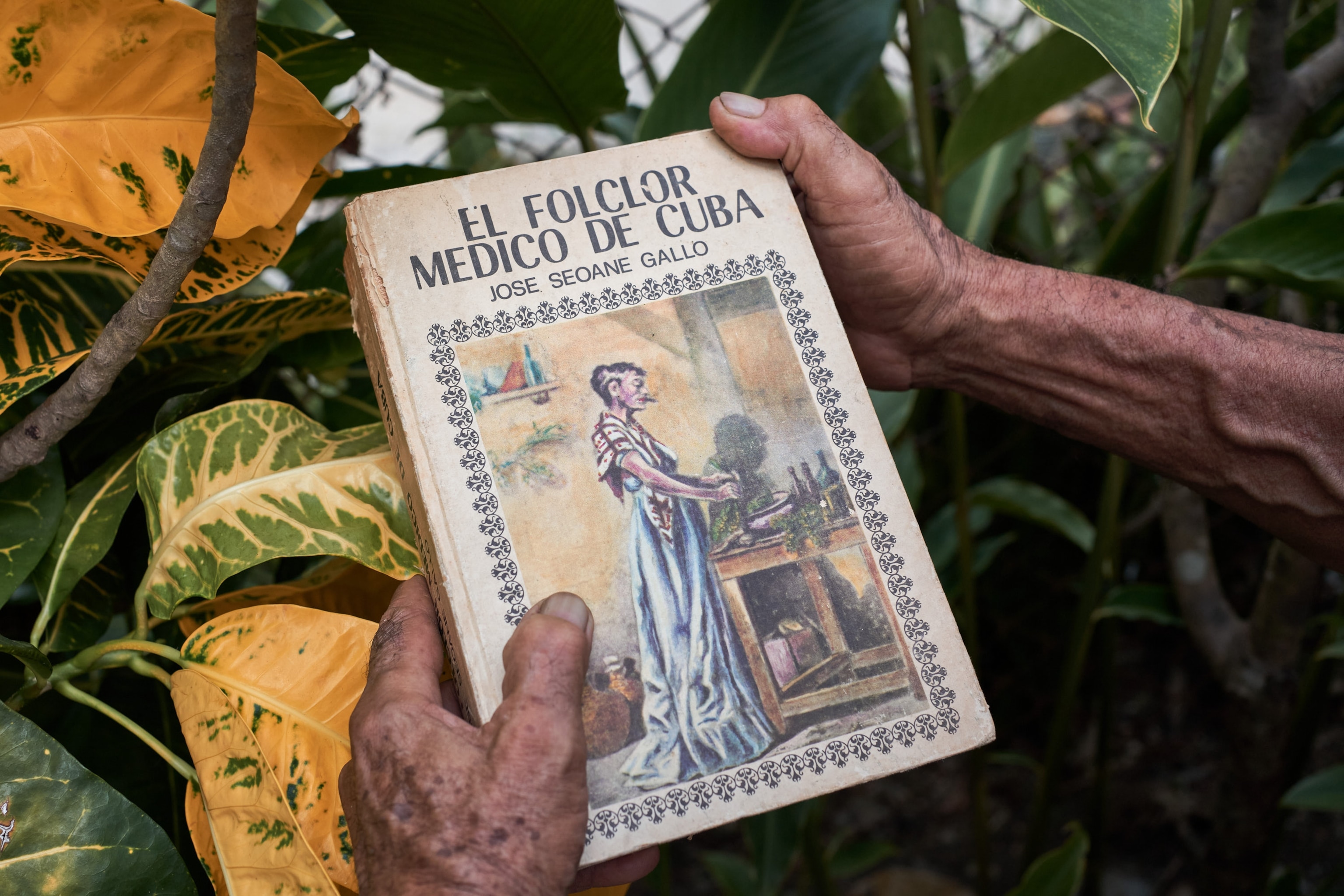 With prescription drugs in short supply in Cuba herbal remedies and other alternative treatments have become increasingly important.

Julio Bienvenido Cisnero holds a book on Cuban traditional medicine in Havana, Cuba. The island has a long folk history of using herbal remedies and alternative treatments, which have become increasingly important in the midst of a shortage of prescription drugs.

Early each morning, Jesús Villalonga heads out to the woods near his home in Cuba’s Matanzas province, east of Havana, to gather medicinal plants and collect his horse from the nearby fields.

Villalonga, 77, is a curandero, a traditional healer. The horse is for his morning job, ferrying people around in a cart that serves as a taxi. Around midday, he returns to his home in the Naranjal neighborhood for daily consultations with neighbors. Their ailments determine which plants he’ll be foraging the next day.

Cuba has a long folk history of using medicinal plants in both Afro-Cuban religious ceremonies and for the treatment of common ailments. Today, with many prescription drugs in short supply—especially during the COVID-19 pandemic—plant-based medications and alternative treatments such as acupuncture, cupping, and therapeutic massages have become increasingly important.

Cuba’s economy has been ailing for decades, exacerbated by mismanagement, longtime United States sanctions, the collapse of the Soviet Union—Cuba’s former benefactor—in 1991, and limited trade with friendly nations including Venezuela, which has endured an economic crisis of its own. Tighter U.S. restrictions during the Trump administration curtailed travel to the island and reduced the amount of money and parcels that could be sent from the mainland, both of which have been a source of medicines. Most recently, the pandemic has hobbled tourism, a vital source of revenue the government needs to buy essential supplies.

“There are shortages of everything,” says Richard Feinberg, a longtime Cuba scholar and professor emeritus at the University of California, San Diego. “Cuba doesn’t have the foreign exchange to import medicines or many other things.”

Some Cubans grow their own medicinal herbs in the countryside or on small urban plots. Others consult curanderos such as Villalonga or buy plant-based medicines at government pharmacies and from private entrepreneurs.

Villalonga began using natural remedies when he was 14 and says that no one taught him about herbs—he learned on his own. “I can’t turn my back on anyone who needs to be cured,” he wrote in an email, adding that he’s providing patients with alternative treatments during the pandemic. He calls his talent a gift from God and never charges for his services. Sometimes satisfied patients leave small gifts such as cigarettes or whatever else they can spare.

As the pandemic drags on, Villalonga says he’s seeing many people suffering from stress. “Now it’s approaching two years with everyone stressed out, children, the elderly—everyone.”

Stress, he says, tends to exacerbate the herpes zoster virus, commonly known as shingles, that can remain latent in the body for years after someone gets chickenpox. The U.S. Centers for Disease Control and Prevention says there are various theories as to why the chickenpox virus gets reactivated but that people with compromised immune systems seem to be more susceptible to the painful shingles rash.

0:18
Jesús Villalonga, a traditional healer, enters the woods to forage for medicinal plants in Matanzas, Cuba.

Depending on where the rash appears, Villalonga treats it with guava or guanabana leaves. He also gathers leaves from the tua tua plant and boils them into a tea that he uses to treat a variety of illnesses, such as diabetes and gastritis. Among his other favorite plant curatives are sage for people with respiratory problems, cedar for lung ailments, bloodroot for cleansing the body, wild heliotrope for kidney stones, and lime and chamomile for upset stomachs.

Villalonga’s treatments always involve passing his hands over the patients’ bodies, a practice common to various religious traditions. Putting hands-on, Villalonga says, allows him to “feel” the ailments. When touching the back of a patient’s leg, for example, he says he can tell what has upset the person’s stomach so he can prepare an herbal remedy that will remove obstructions in the alimentary canal and promote healing.

The mainstreaming of green medicine in Cuba

The World Health Organization noted in a 2019 report on “Traditional and Complementary Medicine” that Cuba has had a national health plan for integrating natural and traditional medicine into its health service delivery system since 1995 and also has a national research office in Havana to study natural medicines.

Cuba first began encouraging the use of medicinal plants and alternative medicine during the economic crisis known as the Special Period, following the collapse of the Soviet Union and the loss of its generous subsidies. The government continued to support green alternatives, manufacturing plant-based medicines in special laboratories and distributing natural medicines through its network of pharmacies.

In the province of Las Tunas, for example, farmers grow plantains, passionflower, mint, guava, lemons, oregano, and other herbs to supply five laboratories with more than 35,000 kilos of plant material annually that are transformed into extracts, syrups, drops, creams, and tinctures, according to Granma, Cuba’s Communist Party publication. These products are often more readily available in state-owned pharmacies than prescription drugs.

State-licensed doctors regularly offer patients alternative treatments, and family doctors and nurses who are assigned to specific neighborhoods are encouraged to plant herb gardens near their offices.

When Maura Pérez Recio, 53, was studying medicine from 1986 to 1992, natural medicines and alternative treatments weren’t part of the curriculum. Now, Pérez, who works at Cuba’s National Institute of Endocrinology, in Havana, is accredited for acupuncture and herbal medicine treatments and includes them as part of her therapeutic arsenal. She says she might prescribe various forms of garlic and onions to lower lipid levels, moringa and basil preparations as hypoglycemic agents for the treatment of type 2 diabetes, and linden and passionflower as sedatives.

During the pandemic, she says, a national campaign has promoted the use of PrevengHo-Vir, a homeopathic medicine thought to boost the immune system, and Cuban doctors have been prescribing plants, such as turmeric, that have antiviral properties and stimulate the immune system.

0:10
Jesús Villalonga, 77, a traditional healer, walks back to his home in the Narajal neighborhood of Matanzas, Cuba, after gathering medicinal plants in nearby woods.

In an open space left by a collapsed building in Old Havana, Julio Bienvenido Cisnero is doing a brisk business at his small, wooden consultorio medico, or medical consulting booth, where he sells everything from sage to moringa, once touted as a miracle plan, especially for treating digestive system ailments, by the late Cuba leader Fidel Castro.

Bienvenido, 68, is licensed by the government to grow and sell medical plants. He pays a state fee to use the open space where he’s run his business since May 2010. He grows some of the medicinal plants that he sells and buys other herbs from suppliers who come from the countryside.

A hand-lettered sign in Spanish above his display case says that he offers plant-based treatments for ailments of the “kidney, liver, gall bladder, prostate, skin, and other pathologies.”

Bienvenido says business has picked up during the pandemic. Some customers buy herbs to make their own teas, salves, and other preparations to boost their immune systems. He carefully counts out the number of leaves they’ll need, wraps them in a sheet of old newspaper, and explains the recipes. He also sells his own preparations. Among them is one he calls the Titan, a drink combining seven medicinal plants: aloe vera, guanabana leaves, chaya, moringa, avocado leaves, candle bush, and leaves from the calabash tree. The Titan, he says, cleanses the body.

Bienvenido says he learned about some medicinal plants from his grandmother and that the family’s knowledge of folk cures traces back to an ancestor brought from Congo during the slave trade to work in the sugarcane fields.

“All the knowledge from Africa has been passed from generation to generation,” he says by phone, adding that he updates his knowledge through reading, computer research, and listening to a government radio program on green medicine.

Alternative medical practices are “a way of returning to nature,” Pérez says, “especially considering that people have the idea that plant-based treatments cause fewer adverse reactions than chemical drugs.”

Natalia Favre is an Argentinian documentary photographer and filmmaker based in Cuba. Her work focuses on social issues through the intersection between community and identity. Follow her on Instagram @nataliafavre_.

Freelance journalist Mimi Whitefield, based in South Florida, covered Cuba, international business, and other news from across Latin America for the Miami Herald. Follow her on Twitter @HeraldMimi.