‘Off-the-charts’ heat to affect millions in U.S. in coming decades

Within 60 years, hot days in the U.S. could be so intense that the current heat index can’t measure them.

In less than 20 years, millions of people in the United States could be exposed to dangerous “off-the-charts” heat conditions of 127 degrees Fahrenheit or more, a startling new report has found. In 60 years over one-third of the population could be exposed to such conditions, “posing unprecedented health risks,” the report says.

This first United States county-by-county look at what climate change will do to temperature and humidity conditions in the coming decades finds few places that won’t be affected by extreme heat.

What constitutes a dangerous day?

Because of our bodies’ natural cooling process—sweat—humidity plays a crucial role in determining the severity of a hot day. When the combined heat index reaches 90˚F, many groups of people are at serious risk.

*HISTORICAL AVERAGE DAYS PER YEAR WITH A HEAT INDEX 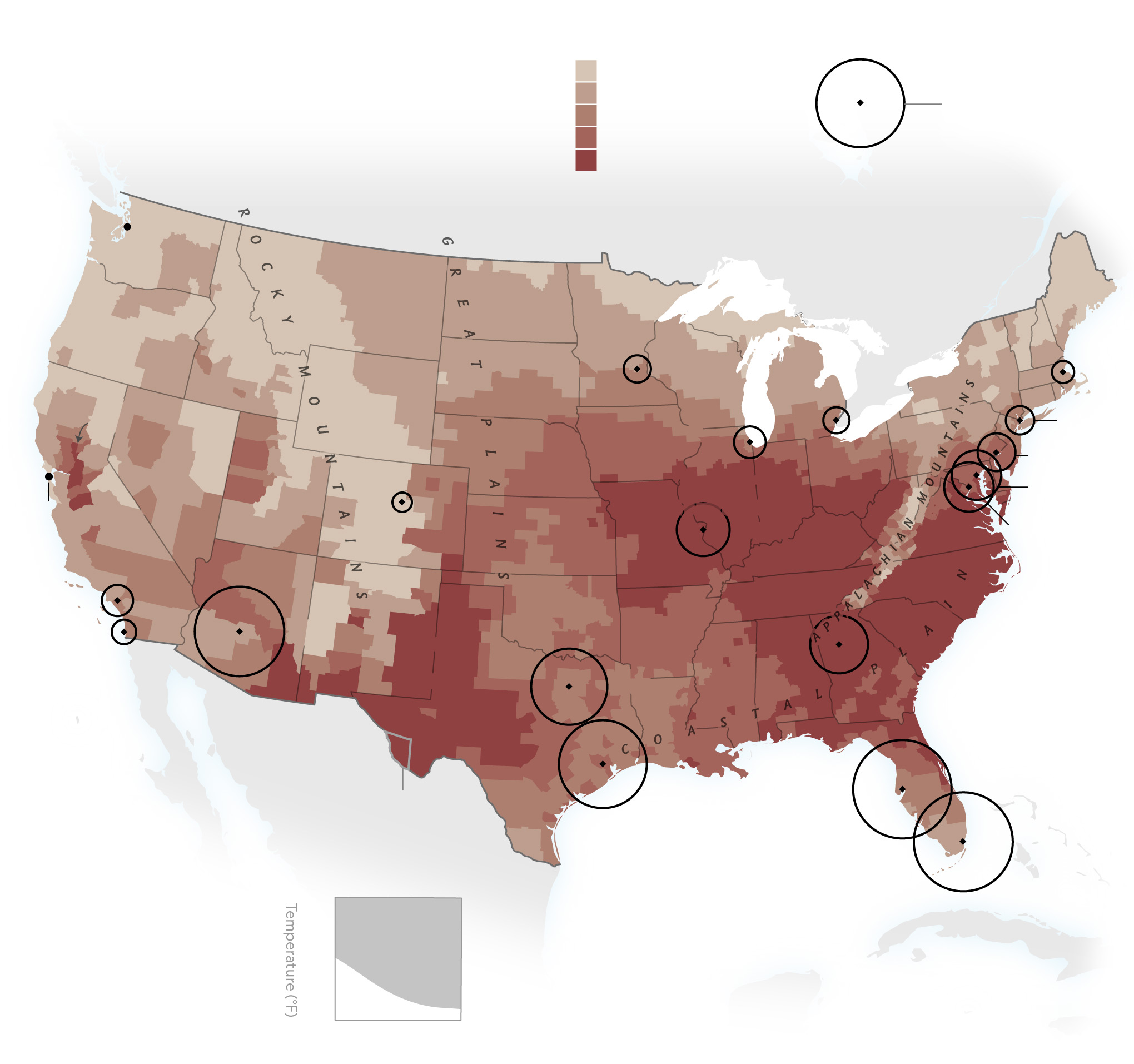 Presidio county in Texas is predicted to go from 41 to 97 dangerous days per year.

Because of our bodies’ natural cooling process—sweat—humidity plays a crucial role in determining the severity of a hot day. When the combined heat index reaches 90F, many groups of people are at serious risk.

“We were very surprised at how steeply and quickly the number of days of dangerous heat increased in such a short time,” says Kristina Dahl, senior climate scientist at Union of Concerned Scientists (UCS), and co-author of the report “Killer Heat in the United States: Climate Choices and the Future of Dangerously Hot Days.”

“I don’t think anyone appreciated how quickly conditions can change,” says Dahl.

Where the heat is on

Without any action to reduce global carbon emissions, parts of Florida and Texas would experience the equivalent in days of at least five months per year on average when the heat index—which includes humidity in its calculations—exceeds 100 degrees Fahrenheit. Most of those days will surpass 105 degrees before the end of the century.

The National Weather Service’s (NWS)'s heat index goes up to 127 degrees Fahrenheit. But in as soon as 20 years the Southeast, Southern Great Plains, and Midwest will begin to experience days that are so hot they are “off the charts.” A few decades later extreme heat will affect communities in 47 states, said the report, which is also published today as a peer-reviewed study in Environmental Research Communications.

By mid-century (between the years 2036 and 2065), more than 250 U.S. cities will experience the equivalent of a month or more per year on average with a heat index surpassing 100 degrees Fahrenheit, compared to just 29 cities historically. That is a conservative estimate for cities because heat added by urban heat island effects isn’t represented in the report, said Dahl.

The increase in the prevalence of heat events by mid-century in this study “represents a terrifying prospect….[and] a direct and immediate threat to human health and wellbeing,” said Tom Crowther, a climate researcher at ETH Zürich, in an email. Crowther is the co-author of a recent study that looked at the future climates of the world’s biggest 520 cities and found that some, including 17 U.S. cities, will experience unprecedented climates by 2050.

The study averaged together projections from 18 hyper-local climate models between April and October over 30-year periods: a historical baseline (1971–2000), midcentury (2036–2065), and late century (2070–2099). The study showed generally that the Southeast and Southern Great Plains would bear the brunt of the extreme heat, experiencing heat that currently only occurs in the Sonoran Desert, in the Southwest

Areas in those regions would experience the equivalent of three months per year on average by mid-century that feel hotter than 105 degrees Fahrenheit, possibly as hot as 115 degrees, 125 degrees, or worse.

This interactive mapping tool developed for the study shows the rapid, widespread increases in extreme heat projected to occur across the United States due to climate change. Information is presented by county and includes all 3,109 counties in the contiguous U.S.

Effects of heat on humans

The NWS heat-index scale is a metric that combines temperature and humidity and is often called the “feels like” temperature. If that reaches 104 degrees Fahrenheit (40 degrees Celsius), our bodies begin to slowly heat up to the ambient temperature. The human body’s internal temperature likes to be between 98.6 to 100.4 degrees Fahrenheit (37 to 38 degrees Celsius); any warmer, and it’s a fever. If our internal temperature reaches 104 degrees, all-important cellular machinery starts to break down. This is extremely dangerous and requires immediate medical attention.

“We have little to no experience with ‘off-the-charts’ heat in the U.S.,” said Erika Spanger-Siegfried, lead climate analyst at UCS and report co-author. “Exposure to conditions in that range makes it difficult for human bodies to cool themselves and could be deadly,” Spanger-Siegfried said in a press release.

While the upper Midwest, Northeast, and Northwest are unlikely to experience off-the-charts heat, it will still be hotter, and people and infrastructure have little ability to cope with plus-100 degree Fahrenheit heat over multiple days, said Rachel Licker, senior climate scientist at UCS and report co-author. “The rise in days with extreme heat will change life as we know it nationwide,” Licker said in a press release.

Type your county into this tool to find out how hot it will be near you.

Much of this extreme heat is still avoidable with steep, rapid carbon emission reductions. If future warming is kept at 3.6 degrees Fahrenheit (2 degrees Celsius) or less, the number of days where the heat index is above 105 degrees nationwide would be slashed in half. That means about 125 million fewer people would be exposed to a month or more of such conditions, compared with our current emissions growth, the report said.

However, the U.S. will still be significantly warmer than today with 85 urban areas—18 percent of those analyzed— exposed to 30 or more days with a heat index above 105 degrees, compared with just three urban areas historically. That said, if current pledges to cut emissions under the Paris Agreement are met, global temperatures will still rise by at least 5.4 degrees Fahrenheit (3 degrees Celsius) by 2100. The Trump administration said in June 2017 that it would pull the U.S. out of the Paris Agreement.

“The scale of heat impacts in this study hint at the enormous changes that climate change will mean for the U.S.,” says Richard Rood, a meteorologist and climate impacts expert at the University of Michigan.

Extreme heat will not occur in isolation. There will also be droughts, wildfires, floods, and other extreme weather events that will compound the impacts of the heat, Rood said in an interview. Food production will be compromised. Add in sea level rise and there will be significant internal migration.

“People are going to move, not only within the U.S. but elsewhere in the world,” he says.

While it is vital to reduce emissions as quickly as possible, adaptation to the coming heat and extreme events is crucial.

“Our past climate can no longer guide us. We have to build and adapt to what’s coming,” says Rood.