Microplastics found near Everest’s peak, highest ever detected in the world

From thinning glaciers to plastic pollution, a slew of new studies discover alarming signs of our environmental toll.

Climbers wait in the queue to summit Mount Everest in May 2019. The stream of people who summit the peak every year have unknowingly left their mark on the mountain in the form of tiny curls of plastic that shed from synthetic materials commonly used in outdoor clothes.

From thinning glaciers to plastic pollution, a slew of new studies discover alarming signs of our environmental toll.

For adventurers the world over, Mount Everest is an unforgettable sight—a regal plume of snow blows off its summit ridge as ice trails down its flank. But take a closer look at this stunning vista, as one team of climate scientists is doing, and you’ll start to notice the telltale signs of human impact from people both near and far.

Today, the surface of the ice at base camp in Nepal sits more than 150 feet lower than it did 35 years ago, the result of glacial melt from our steadily warming climate. Zones of high-altitude ice once thought safe from warming are now starting to dwindle. Even the snow itself isn’t quite so pristine. At 27,700 feet elevation, it is contaminated with microplastics—the highest yet found on the planet.

This is all according to a slew of new papers published this week in a special edition of the journal One Earth. The studies are part of a growing raft of research to emerge from an ambitious effort to study how climate change and other human actions are affecting Everest and the surrounding region, organized by the National Geographic Society and supported by Rolex as part of its Perpetual Planet Initiative.

Between April and June of last year, an interdisciplinary team of more than thirty scientists fanned out across Nepal’s Khumbu Valley, installing five weather stations and collecting hundreds of samples of rock, water, snow, ice, and more. The results laid out in this special issue underscore humans' toll on the environment even at the planet's highest points. (Read more about the science emerging from the 2019 Everest expedition.)

Although some of the discoveries, like the presence of microplastics, don’t pose an immediate environmental threat, others are much more worrisome. For one, even the world’s highest glaciers are losing ice at an accelerating rate. At risk are not only the local communities and vital mountain tourism industry they rely on, but also the millions downstream who depend on the glaciers for freshwater.

“It’s a real wake up call,” says Paul Mayewski, leader of the expedition and director of the Climate Change Institute at the University of Maine. “Despite the fact that the region is very high-elevation, it’s being impacted seriously.”

On a bright morning in May last year, glaciologist Mariusz Potocki watched a steady stream of recreational climbers march past the Balcony, a flat, airy perch at 27,500 feet, just a few hours climb from the top of Everest. Potocki, a glaciologist at the University of Maine, hoped to drill an ice core from the wind-compacted snow at the mountain's summit. But the gathering crowds led him and his crew to abandon the ascent. (Potocki did eventually succeed in retrieving the world’s highest ice core from 26,500 feet at a point known as the South Col.) Instead, Potocki ambled a few hundred feet up the trail to fill a small stainless steel jar with snow.

Later analysis showed that the sample—and ten others collected between base camp and the Balcony—was rife with thin, curly fibers of microplastic.

“The concentrations on the mountain are surprising," says marine scientist Imogen Napper, who analyzed the snow samples in her lab back at the University of Plymouth, in the United Kingdom. "It is somewhere I still consider to be one of the most remote and pristine areas on Earth."

In truth, perhaps it shouldn't have been such a surprise. Nearly every place researchers have looked, they’ve found microplastics, from the deepest recesses of the ocean to the vast open landscapes. Some of these particles have been carried great distances along with dust in the wind or by ocean currents. But on Everest, Napper found, trekkers and mountaineers are likely most to blame.

Synthetic fabrics constantly shed trace amounts of fibers as they're worn. One study found that a gram of synthetic clothing releases 400 microplastic fibers every 20 minutes of use, which could add up to a billion fibers a year for a coat weighing around two pounds.

The microplastics on Everest are largely made up of polyester, followed by acrylic, nylon, and polypropylene—materials all commonly used in outdoor gear. The plastics were also in greater concentration wherever humans most commonly camp. So even though single-use plastics were recently banned throughout the Khumbu Valley, and the mountaineering community has made progress collecting rubbish from Everest's slopes, microplastics will likely continue to accumulate there. It's also possible winds carry additional microplastic to the mountain, Mayewski says.

Too small to see with the naked eye, microplastics are devilishly difficult to clean up, and often left out of the conversation on waste, which frequently focus on reducing, reusing, and recycling large items. "These actions are necessary and important," Napper says. But "solutions need to expand into deeper technological and novel advances.”

While we frequently come into contact with microplastics on a daily basis, Napper says the high-elevation find is an eye opener. "We have now found it from the bottom of the deep sea, all the way to nearly the summit of the highest mountain on Earth."

While Potocki was retrieving snow samples from Everest’s upper slopes, others were toiling at its foot. National Geographic Society geographer Alex Tait led a team that conducted the most accurate survey of base camp and the surrounding Khumbu Glacier. The team used both LIDAR (a type of laser scanning) and photogrammetry (photography from multiple angles) to craft a three-dimensional model that captured every detail down to almost an inch—tents, rocks, and all.

“Scientists are clamoring for this LIDAR data set,” Tait says. “Even though it’s a single snapshot, it provides context for historical understanding.”

One such researcher is glaciologist Owen King, of the University of St. Andrews in the UK, who compared the new images to historical photos from aerial surveys and declassified spy satellites. He then created digital reconstructions of the surface of the Khumbu Glacier, and 78 other glaciers nearby Everest dating back to 1962.

The data not only serve as a baseline to quantify future ice loss across the region, they paint a stark picture of the mountains' situation today. Since 1962, glaciers throughout the Himalaya have been consistently melting. And now, they're dwindling at rates more than 50 percent faster than they were six decades ago. Warming temperatures are likely driving this change, rising by roughly one degree Celsius on the southern Himalaya slopes through the studied period.

Perhaps most concerning, the scientists found, ice is melting at altitudes above 20,000 feet. "That took me back a bit, I have to say," King says. At that elevation, he explains, ice should remain frozen solid all year round, and snow should be accumulating to feed into the glacial system.

A team of 34 scientists journeyed to Everest in 2019 to collect samples that will give scientists critical new data on how climate change is affecting the roof of the world. One unsettling finding: The Khumbu Glacier has lost nearly a fourth of its volume—about 87 billion gallons—since 1962 due to ice melt.

The distance from Base Camp to Mount Everest’s summit is 4.25 miles. 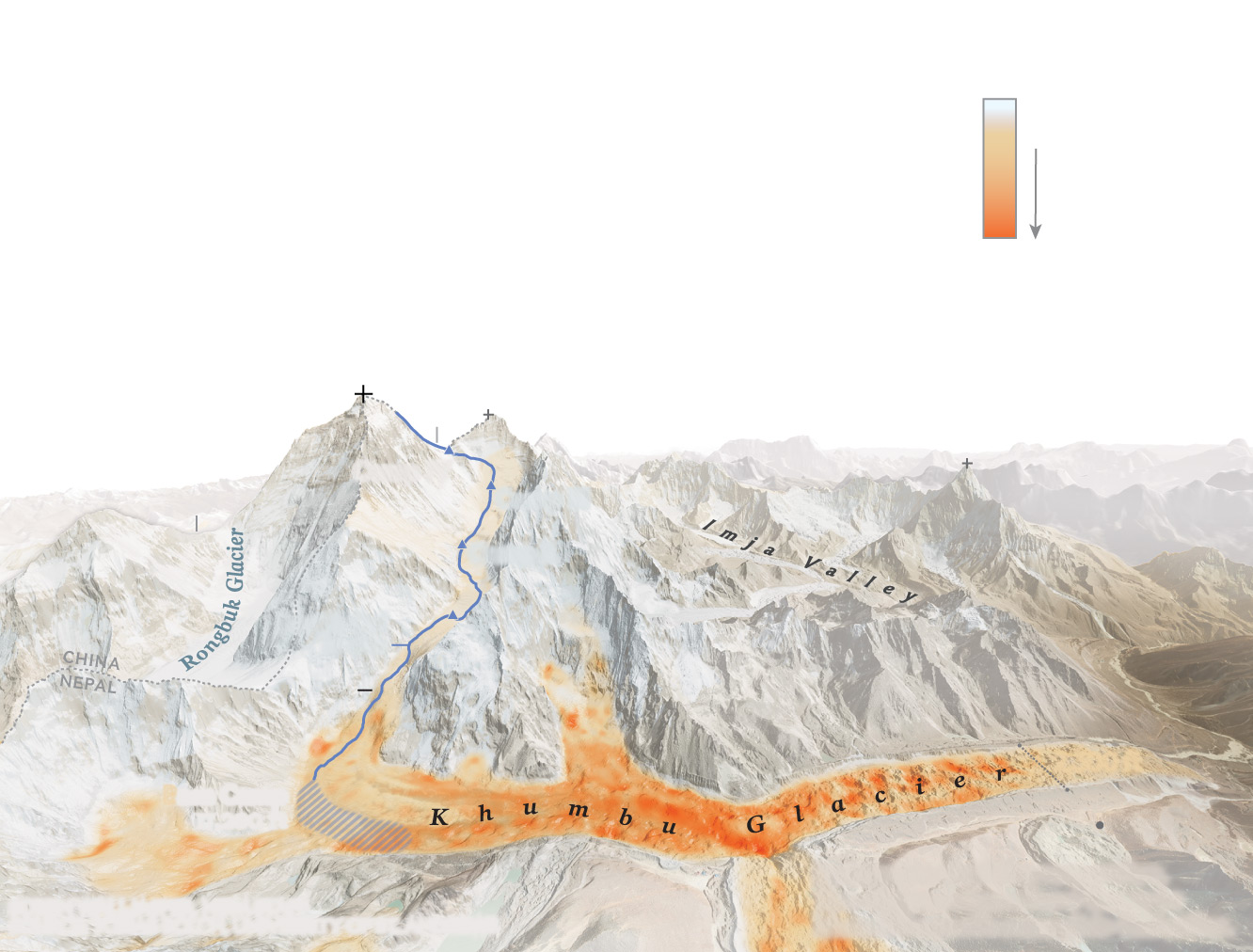 A team of 34 scientists journeyed to Everest in 2019 to collect samples that will give scientists critical new data on how climate change is affecting the roof of the world. One unsettling finding: The Khumbu Glacier has lost nearly a fourth of its volume—about 87 billion gallons—since 1962 due to ice melt.

The distance from Base Camp to Mount Everest’s summit is 4.25 miles.

King’s research further reveals that Himalayan glaciers aren’t so much receding as they are thinning—losing ice from the top surface down, rather than retreating back up valley. “You can think of a glacier as a conveyor belt,” King says. Snow accumulates in the upper reaches of the glacier and compacts into ice that flows downward to its toe. But as temperatures warm and snow fall declines, the conveyor belt has slowed and the glacier has begun to thin.

Paradoxically, thinning is less pronounced in the lower zones of many large Himalayan glaciers, where temperatures are warmer but the conveyor belt has built up a thick blanket of rocky debris that shields the ice from the sun. Thinning is often most intense in the stretches of glacier at higher elevation where there is less debris cover, which leaves the ice vulnerable to melting in the rising temperatures.

Still, even the rocky cover isn't always enough to protect the glacier's toe. The conveyor belt action also builds up a hill of gravel that surrounds its end, called a terminal moraine. This rocky barrier can capture meltwater, forming a lake that often accelerates glacial melting.

What does the future hold for Everest and the greater Himalayas? The team hopes their work can be a springboard to identify the best routes of action.

One thing is certain, Mayewski says: "Wherever people go, we leave our imprint, and that imprint is not always positive."