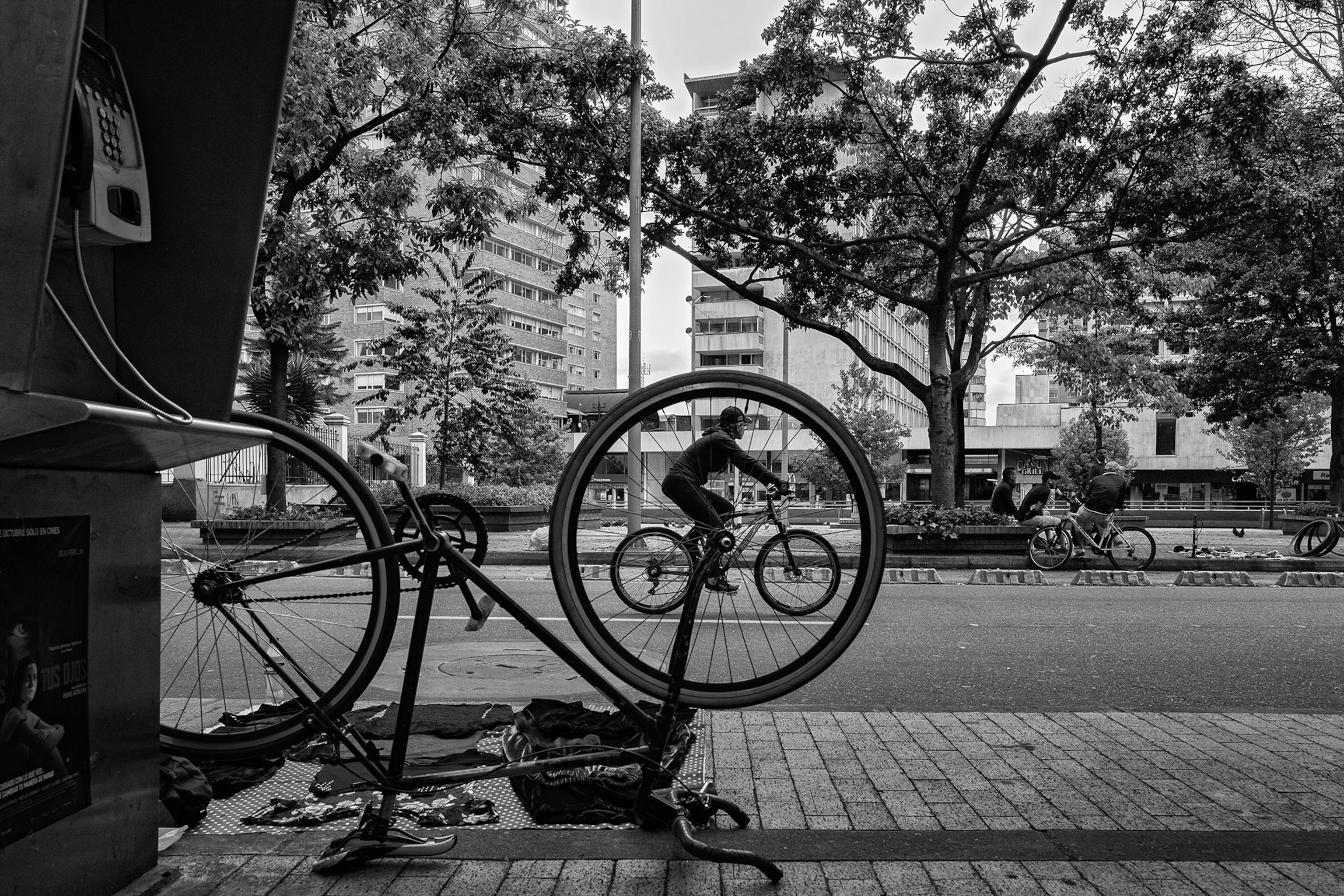 This city bans cars every Sunday—and people love it

Spurred by environmental concerns, an experiment in Bogotá, Colombia, is spreading worldwide.

A little over 75 miles of Bogotá's roadway are turned over each Sunday to the Ciclovía, and as many as one-and-a-half million Bogotanos come out to bike or ride.
Photograph by Juan Cristóbal Cobo, National Geographic

Bogotá, ColombiaIt’s like falling in love all over again; every Sunday without fail, and holidays too, the inhabitants of the car-choked, noise-filled, stressed-out city of Bogotá, 8,660 feet up in the thin air of the Andes, get to feel that the city belongs to them, and not to the 1,600,000 suicidal private cars, 50,000 homicidal taxis, nine thousand gasping buses, and some half-million demented motorcycles that otherwise pack into the buzzing capital of Colombia.

The weekly miracle occurs at an event you could call the Peaceful Community Gathering on Wheels, but is actually named the Ciclovía, or Bicycle Way. Starting at seven in the morning and until two in the afternoon, vast stretches of the city’s principal avenues and highways are turned over to everyone looking to enjoy a bit of fresh air. All kinds of transportation are welcome—bicycles, roller skates, scooters, wheelchairs, skateboards—as long as they are not motor-driven.

A little over 75 miles (120 kilometers) of roadway are turned over to the Sunday Ciclovía and—just to get one last statistic out of the way—a slightly wobbly census shows that as many as one-and-a-half million Bogotanos come out on Sunday to bike or ride. The extremely lazy are free to stroll.

And eat. And dance. And people watch. Along the Séptima Norte stretch of the Ciclovía, which cuts through a narrow park in an upper class section of the city, flaneurs fill sidewalk cafes, their dogs parked below their chairs, baby strollers alongside. Nearby, a capoeira group rehearses, and a bit further several dozen tai chi students push the air gently away in this direction and that.

The Ciclovía has recreovia, or Fun Stops, along the way. At this particular one a killer salsa band sets up most Sundays, right after a Zumba instructor stops yelling loud enough to be heard three blocks away. For the aspirationally trim, fruit salad and orange juice are available for sale curbside. A cup of sliced green mango can be bought at a little mango-shaped cart across the way.

“The most important thing is the social fabric that gets woven [among people who use] the Ciclovía,” said Bibiana Sarmiento, a young woman who started out as a skater and guardián for the Ciclovía fourteen years ago and now runs the whole program. Among the innovations her team is working on are free, twice-monthly bike lessons for all ages, and areas alongside the bike path where parents can read to their children.

“The Ciclovía is the moment when motor vehicles make way for human beings,” said Sarmiento. “Our objective is to make citizens take over the city’s public space.”

Birth of an idea

How is it that the capital of a poor country beset by fratricidal violence for long decades, sorely lacking in so many of the basic urban disciplines, came up with an idea that has been taken up by urbanists and forward-thinking politicians all over the world?

In 1976, drivers liked to park their cars straight across sidewalks that existed mostly in the wealthier parts of the city, and traffic lights were considered an encouragement to test how many red ones one could drive through. Even so, it was then that a group of prominent citizens—Bogotá was still the kind of city that had Prominent Citizens—lobbied for this unheard of thing, a Sunday bicycle path.

“Until then, bicycles were used by the pharmacy delivery boy,” Paul Bromberg said the other day. “But the Sunday path coincided with a new awareness of fitness and a boom in the social category called ‘youth,’ which cuts through all the social classes. The idea took off.”

Twenty years later, Bromberg was in charge of something called Citizen Culture, in the ground-breaking administration of Antanas Mockus, a mathematician of Lithuanian descent who, as mayor from 1995 to 1997 and then again from 2001 to 2003, focused on just what Bromberg’s job title says: creating a more informed and active citizenry through education and culture.

Young actors trained as mimes were posted at crosswalks to encourage drivers not to invade pedestrian space, and to wait for stoplights to fully change from red to green before charging into the crossroad. City officials talked trash, and how to recycle it. And, adopting a plan drawn up by the brother of Enrique Peñalosa, who would become Bogotá’s second groundbreaking mayor in 1998, Mockus took up the old existing Sunday bike path program and morphed it into the Ciclovía: a gentle, slow-motion party in which what happens on the sidelines is as much a part of the show as the ride down the closed-off avenues.

A celebration of food and culture

“Frankly, I just come for the food,” said one salivating young woman standing in front of Orlando Paez’s grilled corn-on-the-cob and arepa cart, on the Boyacá Norte stretch of the Ciclovía. Looking at Paez’ immaculate kitchen on wheels, I regretted my own prudent breakfast: in addition to the corn roasting over live coals that the young woman was waiting for so impatiently, there were empanadas, yucca dumplings, and steaming hot, cheese-filled arepas, charred just a little from the grill, which I could have ordered stuffed with scrambled eggs made on the spot.

Waiting for one of these treats to come off the grill, I could have ordered fresh-squeezed orange juice from a neighboring cart. Coffee, no doubt, could be acquired from a wandering vendor with a series of thermoses packed on his back for coffee, hot milk, and aguapanela, a hot drink made with raw sugar.

Not only the food was livelier at this squarely middle and working-class part of the city. In contrast to the half-dozen or so timid exercisers who keep the zumba instructors company at the upper-class Virrey Fun Stop, there were easily two hundred women, plus a few men, in front of the Colina shopping center, working it for the instructors as if they were about to head to a Broadway audition, to the tune of Colombian salsa and cumbia classics.

“One gets bored just going from home to work and back again,” said Martha Cubillos, a pleasant general services employee for the city who said she had biked with her husband to the Ciclovía from the far outskirts of town. She could stand to lose a little weight, according to her doctor, “so I come here every eight days and they teach us how to do aerobics.”

Was the Ciclovía one of the things she liked best about Bogotá? Oh, definitely. She took a swig of water and jumped back into the sweaty throng.

Ciclovía’s director, Sarmiento, said that in a highly stratified society like Colombia’s one of the things she loves about the program is its egalitarian nature. “No one cares about the clothes you’re wearing or what social class you’re from: everyone is welcome, and everyone is equal,” she’d said. The line-up of bikes leaning next to each other alongside the Zumba class—some rusted and wobbly, some with comfortably upholstered seats—supported that statement.

What good does it do?

Bromberg, the former director of Citizen Culture, who later served as a well-regarded interim mayor, emerged from his stint in politics and public policy with a certain amount of skepticism about how much lasting change one can effect through government. “We live in countries where the state is weak and has few resources,” he said. “Incoming politicians propose any number of difficult things that turn out to be impossible to achieve. So then they build parks: pruning trees and keeping a lawn mowed is cheap.”

Perhaps, if Bromberg is right, the Ciclovía he helped create isn´t such a big deal. Certainly it doesn’t help provide desperately needed public transportation and better-quality education, or bring order to the vast improvised communities of migrants from the recently war-torn countryside.

But one could argue that Bromberg and Mockus and Peñalosa’s Ciclovía changed the idea of the city for mayors and urbanists who have installed Ciclovías all over the world—from New Zealand to Europe to China—and for any number of Sunday celebrants as well. I had been struck by how calm the bikers and strollers I talked to seemed, their trusting willingness to provide a private phone number, the lack of shouting and conflict everywhere.

“We see the change in behavior,” Sarmiento confirmed. “During the week if a policeman approaches to recommend a different conduct, everyone will answer [aggressively.] “On Sundays, people will do as the policeman asks. On Sundays, citizens become tolerant.”

And so it seemed on a brilliant Sunday afternoon. This month marks the 25th anniversary of the modern-style Ciclovía, and the peaceable kingdom it has helped create was very much on view.

Please be respectful of copyright. Unauthorized use is prohibited.
Alma Guillermoprieto writes frequently about Latin America for National Geographic.