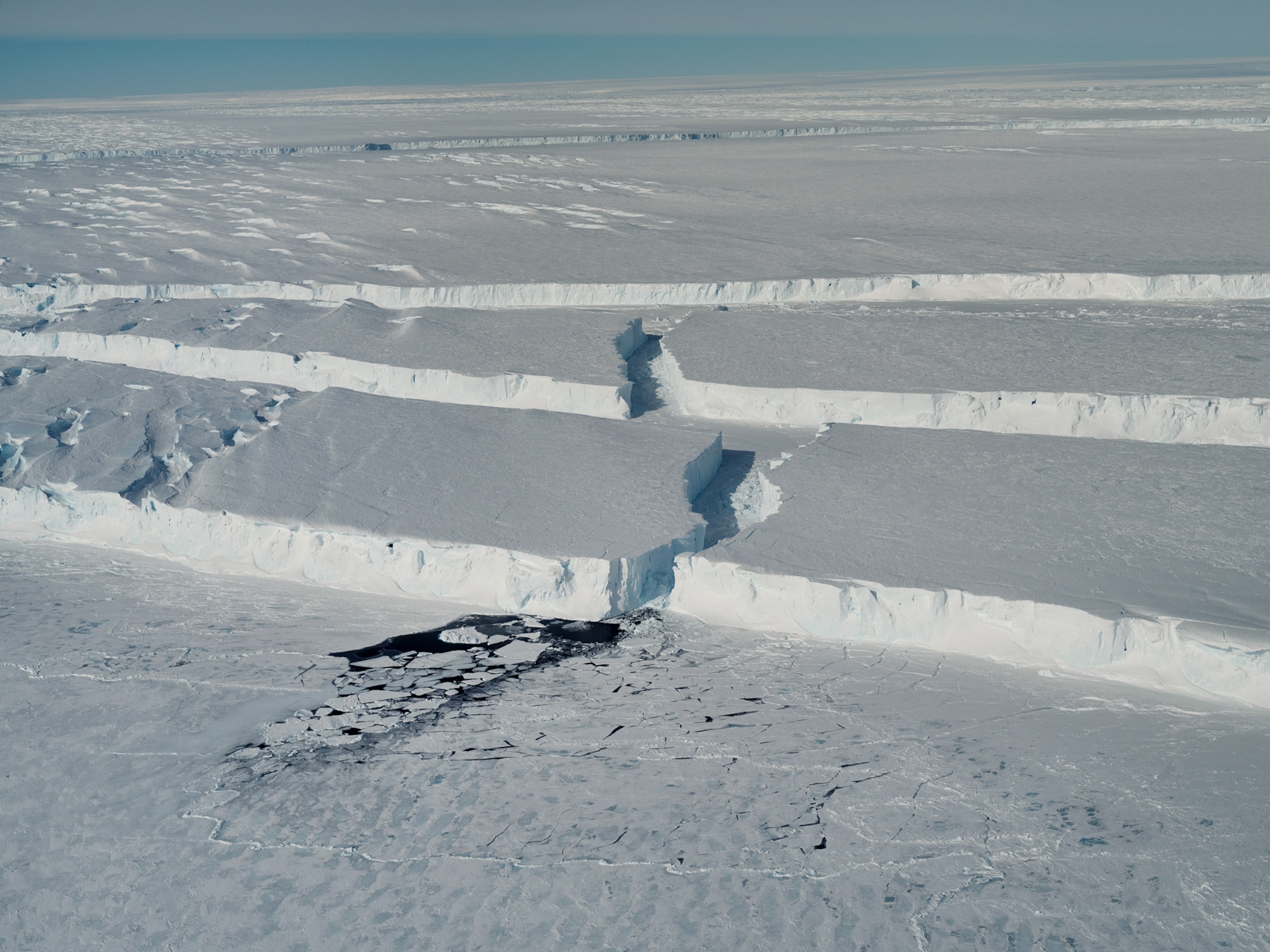 NASA scientists just got their first close look at a new iceberg three times the size of Manhattan. Our team was on the plane.

Curving ice canyons mark the edge of the new iceberg, dubbed B-46, as it breaks off the thick, floating ice shelf of the Pine Island Glacier in West Antarctica. In the foreground lies broken sea ice on the dark surface of the Amundsen Sea.
Photograph by Thomas Prior, National Geographic

Above the Pine Island Glacier, West AntarcticaAs the plane approached low over the enormous expanse of white, excited scientists crowded to the windows, cameras in hand. Their instruments had warned them that something special was about to emerge from the bleak expanse of West Antarctica.

“We’re coming up on B-46,” a pilot’s voice crackled in their headsets.

Moments later, the cracks appeared. Huge, blocky fissures sliced across the giant white layer cake of the Pine Island Glacier, a fast-moving part of the West Antarctic ice sheet. The sound of clicking shutters filled the noisy, drafty cabin of the DC-8. There were broad smiles and exclamations. “It’s so big,” someone said. “It’s incredible,” said another.

Another giant chunk of ice had just broken off the glacier.

As the jet continued its auto-controlled transect line, 1,500 feet over the ice, it crossed the main break—a huge white canyon that marked a detachment point of what was now an iceberg from the rest of the glacier’s floating ice shelf. The new iceberg, named B-46 by scientists, is estimated to cover about 71 square miles, more than three times the size of Manhattan. The cliffs at its edges are 160 to 230 feet high.

“This is a brand new feature,” said Brooke Medley, a glaciologist with NASA’s Goddard Space Flight Center in Maryland. “I’m 99 percent sure we are the first people to ever see this with our own eyes.”

Pine Island Glacier sits along the Amundsen Sea, west of the Antarctic Peninsula. Remote as it is, it’s one of the most famous and studied glaciers in the world—because it’s one of the fastest changing. As the glacier melts, largely due to warm seawater that’s being driven under its floating shelf by changing winds and currents, it contributes significantly to global sea level rise. (Read more about Antarctic melting and sea level rise.)

In September, scientists studying satellite photographs had discovered a crack in the ice shelf. “It’s possible it started before that, but it was in the polar winter then and we don’t have a record of it,” said Medley.

The fissure that separates the B-46 iceberg from the shelf of the Pine Island Glacier in West Antarctica.

Photograph by Thomas Prior, National Geographic

The B-46 iceberg is thought to have broken off just a few weeks later, on or around October 27, again according to satellite imagery, said Medley, who is also the deputy project scientist for NASA’s Operation IceBridge. Since 2009, the program has flown highly sensitive instruments over both poles in a variety of aircraft—including the vintage DC-8 used this week—to study how the ice-covered regions are changing as the planet warms.

The speed of the iceberg’s break has surprised scientists. And when it calved, “it may have taken smaller bergs with it along the way,” Medley adds.

In fact, the iceberg is so large and fresh, and still so close to the adjacent glacier, that it is hard to take in whole from an altitude of 1,500 feet—imagine flying over Manhattan just a few feet above the tip of the Empire State Building’s antenna.

“It’s difficult to grasp the scale of what we are looking at,” Medley said from her workstation in the DC-8, behind a bank of monitors. “But it’s absolutely stunning. Spectacular.”

In addition to the main ice canyons that mark the berg’s outer boundaries, it’s also bisected by many smaller crevasses, indicating that it’s already breaking up into smaller pieces. Even more fissures can be seen cutting into the glacier itself.

B-46 will likely keep breaking up over the coming weeks, as it is buffeted by wind and currents in the Southern Ocean.

Although it’s a large mass of ice, B-46 is hardly the largest in recent memory. In 2015, the Pine Island Glacier—or PIG, as scientists affectionately call it—calved a 225-square-mile iceberg. And in July 2017, an expanse of ice the size of Delaware, some 2,240 square miles, broke off the Larsen C ice shelf on the Antarctic Peninsula. (Learn more about the impacts of warming on the peninsula.)

Although such big ice calving events can be purely natural phenomena, they have increasingly drawn attention from the scientific community and public because of their possible links to global climate change. As the world’s land-based glaciers melt with warming temperatures—particularly in Greenland and Antarctica—global sea level is rising. That, in turn, threatens to drown low-lying areas from Florida to Bangladesh.

“Pine Island and the neighboring Thwaites Glacier contribute a large fraction of global sea-level rise, five to 10 percent, even though they only make up about three percent of Antarctica,” said John Sonntag, a NASA Goddard scientist and self-described “weather nerd”, who was also on the fight.

The glaciers that rim Antarctica are buttressed by their floating ice shelves. As those ice shelves melt and break into pieces, they relieve pressure on the vast amounts of inland ice behind them. If entire glaciers were to slough off into the sea, they could eventually raise sea level by tens of feet, with potentially catastrophic implications for human civilization.

In the early 2000s, Pine Island Glacier calved large icebergs roughly once every six years. But in the past five years there have now been four such events. Since the 1970s, the edge of the glacier has retreated tens of miles. Driving all this melting is water that in the Amundsen Sea has warmed by more than a degree Fahrenheit over the past few decades.

“It’s amazing the relevance to our species that this one area has,” Sonntag said.

Medley cautions that it’s difficult to link a specific calving event with long-term change. “That being said, you can look at the frequency of events.”

Glacier behavior is complex and there are significant gaps in understanding. In fact, collecting data to help close those gaps is the main purpose of the day’s flight over the bottom of the world, as part of NASA IceBridge’s austral spring and summer campaign. In particular, the scientists hope to better map the seafloor under the ice shelves (which influences the speed at which the ice retreats), and more precisely work out the densities and masses of the snow and ice (which can influence melt rates).

Preliminary data from the lasers and radar on board the DC-8 suggest B-46 had fractures that went at least 200 feet deep, said Jim Yungel, a NASA Goddard engineer overseeing the instruments on the flight.

For now, it’s hard to say how much the new iceberg may contribute to, or be a symptom of, the wider changes facing West Antarctica.

But, says Medley, “The fact that it broke off so rapidly is concerning.”