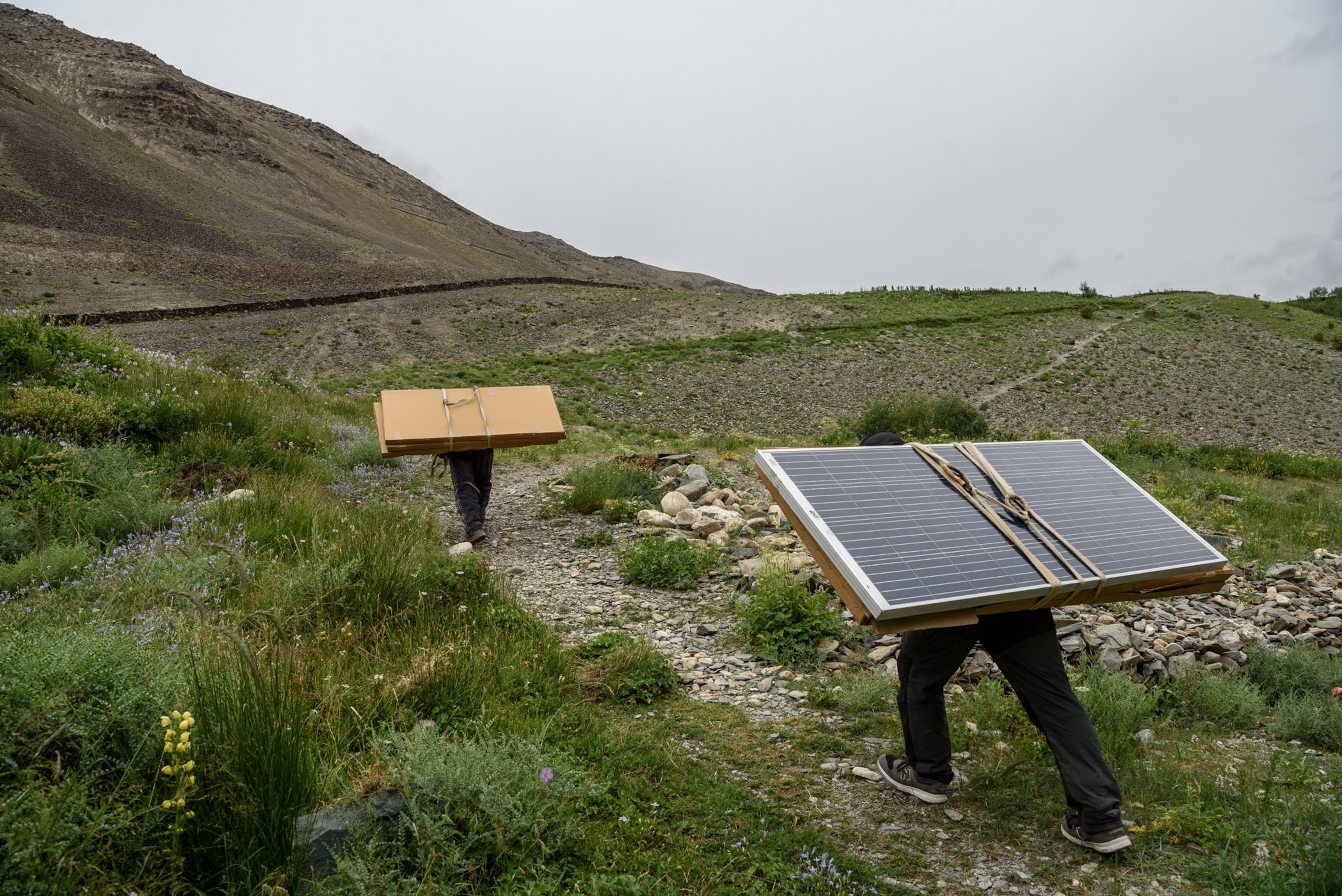 Grassroots efforts are bringing solar panels to rural villages without electricity, while massive solar arrays are being built across the country.

On the last leg of a two-day trip that began with a drive over treacherous mountain roads, workers with Global Himalayan Expedition help carry solar panels to the village of Yal in Ladakh, India. The company organizes treks for socially minded tourists to bring solar power to Indian villages that have no electricity.

This story was produced and published by National Geographic through a reporting partnership with the United Nations Development Programme.

Dungarpur, INDIAMarried at 13 and a mother by 16, Rukmini Katara once ran a small grocery store with her husband in her village near Udaipur in Rajasthan. Like millions of rural Indian women, she expected to follow a familiar path: doing what her husband’s family asked of her, devoting herself to domestic responsibilities at the cost of any personal ambition. But Katara has become the face of an effort to ignite a solar energy revolution in India’s villages.

Katara, 34, is the C.E.O. of Durga Energy, a company that manufactures solar panels and is staffed by about 40 women—including many who never finished high school. Launched with help from the Indian Institute of Technology, Bombay, and the Rajasthan state government, the company has sold more than 300,000 solar panels since its factory began operations in 2017.

Most have gone to homes, businesses, and institutions in and around Dungarpur, a small town near Udaipur, where Durga Energy is located, in a neighborhood a few blocks away from the town’s main thoroughfare. One solar installation that Katara is particularly proud of is a set of panels that powers the pump of a well in a nearby village. It saves dozens of women the daily effort of drawing water by hand.

"When we started, we never thought we would be able to achieve what we have in these four years,” says Katara, who often smiles radiantly when she speaks.

The solar panels sold so far by Durga Energy cover only a tiny fraction of the area’s energy needs, but the hope is that manufacturing operations like it will inspire similar enterprises in both rural and urban India, enabling a switch from coal-fired electricity to solar power throughout the country. By employing women from villages who have no technical education, the company also wants to demonstrate that tackling the climate change crisis also can accomplish other important goals, such as empowering women and boosting rural economies.

“When solar panels are produced locally, people will buy locally and money will circulate within the local economy,” explains Chetan Solanki, a solar energy expert and professor at the Indian Institute of Technology, Bombay. Solanki helped found Durga Energy, as well as a similar enterprise in rural Maharashtra called Udaan. These are the only businesses of their kind in rural India, but Solanki is hopeful that the concept will spread.

As the third largest emitter of carbon in the world, after China and the United States, India has a significant role to play in addressing the climate crisis. The country is already reeling from the devastating consequences of climate change, with extreme weather events like droughts and hurricanes becoming increasingly frequent and severe. In 2020, for example, Cyclone Amphan ravaged the states of West Bengal and Odisha, displacing millions from their homes and causing damage that cost billions of dollars.

At the COP26 summit in Glasgow, Indian Prime Minister Narendra Modi pledged that the country would become carbon-neutral by 2070, a target date 20 years later than the mark set by the United States and 10 years later than China’s—but still a big step forward for India. The country has committed to cutting its emissions per unit of GDP by 45 percent between now and 2030. By then, India plans to ramp up its renewable energy capacity from 134 gigawatts today to 500 gigawatts, supplying half of its projected energy needs. If that plan succeeds it would be an extraordinary achievement.

The country already has created 42 solar parks around the country, including one spread over 14,000 acres of desert in Bhadla, Rajasthan, with a capacity over 2.2 gigawatts—the largest facility of its kind in the world. But India is also continuing to build coal-fired power plants that have decades-long lifetimes, signaling that the country expects to remain heavily reliant on coal for its energy needs for a long time to come.

Solanki’s idea of promoting solar entrepreneurship in small towns and villages is aimed at ending that reliance more quickly. It could also be a boon to the nearly 25 million rural households across the country that lack access to electricity.

Rukmini Katara’s journey from village grocer to C.E.O. began about a decade ago when she got together with women from her village to start a small cooperative bank to give microloans to members. In 2016, she was recruited by Solanki to help distribute solar-powered lamps to more than 40,000 households in Dungarpur and adjoining areas. The lamps were intended to help children study at night.

The first time Katara needed to travel out of her village—to attend a two-week training—her husband told her she couldn’t.

“I went anyway. I didn’t take my phone with me, and I told him I was leaving everything behind,” she recalls. Her husband called her supervisor two days later, asking to speak to her. “Have you forgotten me? Don’t you want to talk to me?” he asked her gently. “After that trip, he never stopped me from going anywhere again,” Katara says.

When IIT Bombay gave her a chance to become a solar entrepreneur, she was ready for the role and her husband was supportive. Nearly 300 women from villages applied to be part of the enterprise. The Rajasthan government allowed the company to convert an abandoned school into a factory, and a telecom company provided money to buy manufacturing equipment.

After two written tests and an interview, about 40 applicants were chosen and underwent training for six months. At the factory, some of the workers have the task of testing solar cells—the fundamental component of solar panels, which the company buys in bulk from a supplier. Others handle the work of welding wires onto individual cells and arraying them in a formation of rows and columns dictated by the panel design. The cells are then soldered together and laminated in glass.

The solar panels range in output from 2.5 watts—enough to power a single LED light bulb—to 10 watts, which can run a table fan, a computer, or a television. Typically, households here opt for installations ranging from 20 to 100 watts in capacity, partially or fully covering the modest energy needs of a small rural home.

“My family was proud that I was the only one in my neighborhood who got selected,” says Asha Katara, one of the employees of Durga Energy. She says her father-in-law met with Rukmini Katara, who is not related, before giving his approval. “He was impressed with her,” she says. “My in-laws told me—we’ll take care of your daughter when you go to work.”

In Ladakh, tourists are helping

In other, more remote parts of India like the mountainous Ladakh region, where some villages are not connected to the electricity grid, solar energy is transforming lives, says Paras Loomba, who runs a company that organizes tourist expeditions aimed at having a social impact. Loomba was on a trip to Antarctica when he was inspired to quit his engineering job and look for a way to combine his passion for the outdoors with his desire to make meaningful change.

After founding his company in 2013, Loomba started leading treks to villages in Ladakh that couldn’t be found on a Google map and setting up solar panels with the help of tourists willing to pay for the experience. In some cases, they installed panels for single households; in other instances, they installed a set of panels to serve multiple households.

Loomba wanted the communities to be invested in maintaining this infrastructure, so he asked them to create a fund that every electrified household would pay into monthly. “If anything happens to the grid,” he says he told the residents of the village, “you’ll have to pay a local service engineer so that your village electricity can be kept running.”

After the first few trips, Loomba started getting messages on WhatsApp from people who shared pictures of other villages across Ladakh and elsewhere in India that needed electricity. Several people who had joined him on these treks quit their jobs and began to work with Loomba. In the years since, his company—Global Himalayan Expedition—has led trips to install solar grids in more than 100 villages across Ladakh. The company more recently has begun outfitting remote villages in Meghalaya, in northeastern India, with solar grids.

Both tourist-funded solar installation and local manufacturing could prove effective in lighting up parts of the world outside India that still don’t have access to electricity.

“In some countries in Africa, for instance, where electrification is still in the 50 to 60 percent range,” says Solanki, “the local manufacturing model could provide electricity to people in rural, remote areas with low investment and in the least amount of time. I call it energy produced by locals for locals.”