Ancient Egyptian 'funeral home' was one-stop shop for the afterlife

In a tomb deep below the desert, Egyptologist Ramadan Hussein (left) and mummy specialist Salima Ikram (right) examine the coffin of a woman who was laid to rest inside a limestone sarcophagus weighing more than seven tons.

The discovery made headlines around the world when it was first announced in July 2018: Archaeologists had unearthed an ancient Egyptian “funeral home” deep beneath the sands of Saqqara, a sprawling necropolis—city of the dead—located on the banks of the Nile less than 20 miles south of Cairo.

In the two years since, thorough analysis of the finds and new discoveries in a nearby shaft filled with tombs have yielded a trove of information about the business of death in ancient Egypt. For centuries, archaeology in the land of the pharaohs was focused on uncovering inscriptions and artifacts from royal tombs rather than the details of day-to-day life. Mummification workshops probably existed at necropolises all over Egypt, but many were overlooked by generations of excavators rushing to get to the tombs underneath.

Now, with the discoveries at Saqqara, that’s changing as the archaeological evidence for a vast funeral industry is unearthed and documented in detail for the first time.

“The evidence we uncovered shows the embalmers had very good business sense,” says Ramadan Hussein, an Egyptologist based at the University of Tübingen in Germany. “They were very smart about providing alternatives.”

Couldn’t afford a deluxe burial mask crafted with gold and silver? You might be offered the “white plaster and gold foil” deal instead, Hussein says.

Not enough cash to store your innards in jars of lustrous Egyptian alabaster? How about a nice painted clay set instead?

“We’ve been reading about this in the [ancient] texts,” Hussein says, “but now we can really contextualize the business of death.”

Hussein began working at Saqqara in 2016, searching for tombs dating to around 600 B.C. and hidden deep underground. The deep shafts had been largely ignored by earlier Egyptologists, who often focused on burials from older periods in Egyptian history. His team’s work is profiled in a new, four-part National Geographic series, Kingdom of the Mummies, which premiers in the U.S. Tuesday May 12. While probing an area last examined in the late 1800s, Hussein and his team discovered a shaft carved into the bedrock that was filled with sand and debris.

After removing 42 tons of fill, the archaeologists arrived at the bottom of the 40-foot shaft and found a roomy, high-ceilinged chamber. It, too, was choked with sand and boulders that had to be removed. Among the rubble were thousands of broken pieces of pottery, each of which had to be carefully documented and conserved. The painstaking excavation took months.

When at last the chamber was empty, the team was surprised to discover that it wasn’t a tomb. The room had a raised, table-like area and shallow channels cut into the bedrock along the base of one wall. In one corner, a barrel-sized bowl was filled with charcoal, ash, and dark sand. An older tunnel—part of a network of passages that honeycomb the rock beneath Saqqara—moved cool air through the space.

The clues suggested to Hussein that the chamber had been a mummification workshop, complete with an industrial-strength incense burner, drainage channels to funnel blood, and a natural ventilation system.

“If you’re doing evisceration down there, you need air moving in to get rid of insects,” Hussein says. “You want constant movement of air when you’re dealing with cadavers.”

Over the past year, pottery experts were able to piece together the ceramic sherds, reconstructing hundreds of small bowls and jars, each one inscribed with a label.

“Every single cup or bowl has the name of the substance it held, and the days of the embalming procedure it was used,” Hussein says. “Instructions are written directly on the objects.” (Related: Archaeologists uncover an embalming recipe some 5,600 years old.)

The discovery has been a boon for scholars who study ancient Egyptian burial practices, offering a unique look at the sacred rites—and gritty realities—of mummification.

While there’s ample documentation of the elaborate process in ancient sources, and even artistic depictions on the walls of Egyptian tombs, archaeological evidence has been hard to come by.

“Very few workshops devoted to the process have been properly excavated,” says Dietrich Raue, curator of the University of Leipzig’s Egyptian Museum. “That leads to a big gap in our knowledge.”

The discoveries at Saqqara are helping fill that void, says Hussein. “For the first time, we can talk about the archaeology of embalming.” 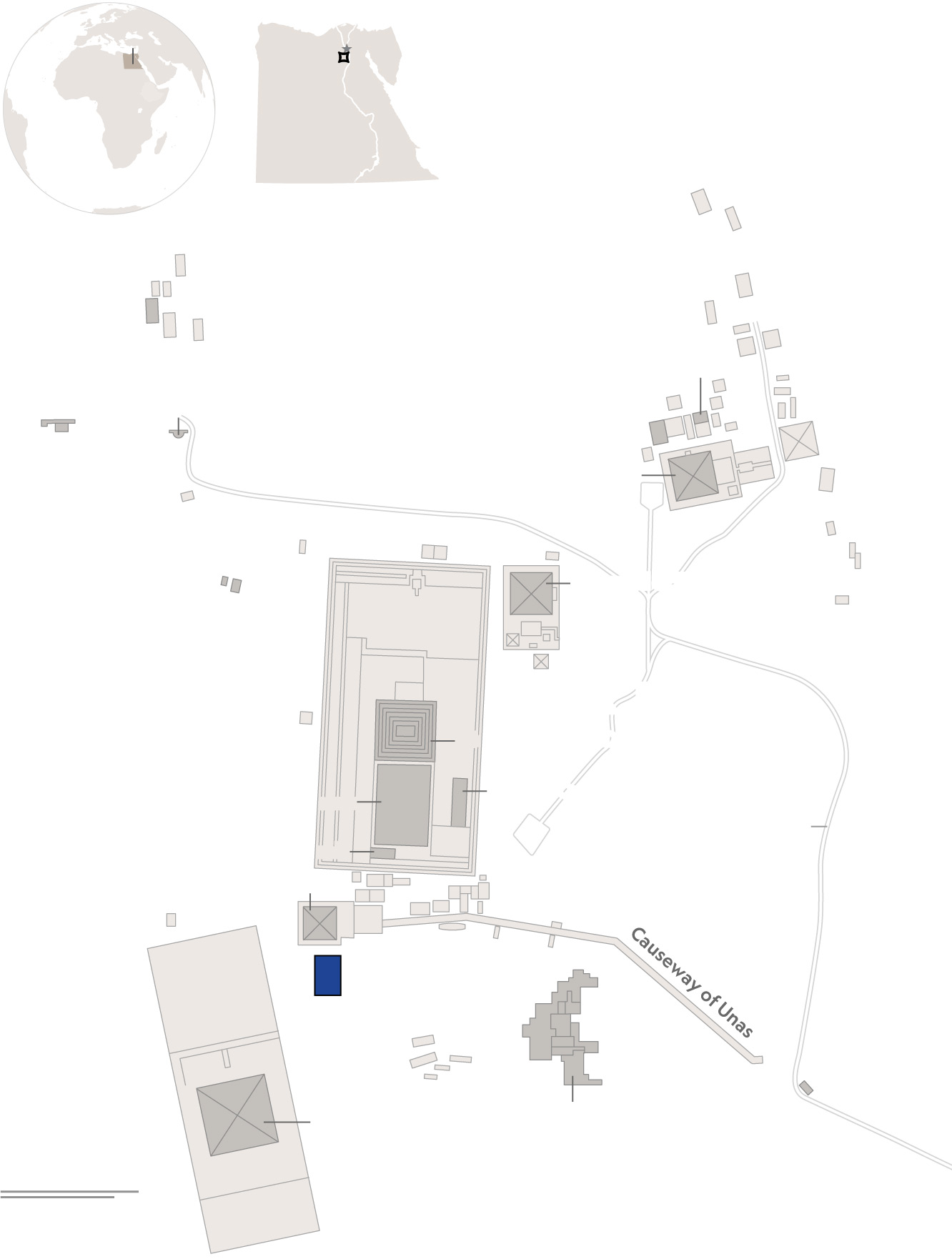 To ancient Egyptians, who believed the body had to remain intact to house the soul during the afterlife, embalming was a mixture of holy rite and medical procedure. The process was a carefully orchestrated ritual, with specific rites and prayers performed on each of the 70 days it took to turn a dead person into a mummy.

First the internal organs were removed and placed in containers archaeologists call canopic jars. Next the body was dried using special salts such as natron. Then the deceased was anointed with fragrant oils and wrapped in linens. Amulets and spells were then tucked between the folds of cloth. At last the mummy was laid to rest in a tomb furnished with provisions for the afterlife as fancy as one could afford.

The towering pyramids of the pharaohs and the glittering gold from King Tutankhamun’s tomb are familiar reminders of the lengths the richest Egyptians went to to ensure they would spend eternity in style. “It was a huge industry,” Hussein says.

But a mummy’s journey didn’t end with embalming and burial—and neither did the income stream. In addition to serving as priests and undertakers, ancient Egyptian embalmers were real-estate salesmen, too.

While pharaohs and the Egyptian elite were mummified and laid to rest in elaborately decorated coffins and roomy tombs packed with grave goods, Hussein’s research shows that ancient undertakers offered discount packages to suit every budget. In today’s business jargon, they were vertically integrated, providing everything from evisceration of corpses and burials to the care and maintenance of the souls of the deceased—all for a fee, of course.

Just a few steps from the mummification workshop at Saqqara, the archaeologists uncovered a second shaft leading to a complex of six tombs. Inside those half-dozen tombs were more than 50 mummies.

At the bottom of the shaft—almost 100 feet beneath the surface, where spaces were more expensive because of their proximity to the underworld—the burials were especially elaborate and expensive. They included a woman laid to rest inside a limestone sarcophagus weighing seven and a half tons. In a nearby chamber was a woman whose face was covered with a mask made of silver and gold. It was the first such mask found in Egypt in more than half a century.

But the complex also held middle-class or working-class Egyptians interred in simple wooden coffins, or just wrapped in linen and placed in sand pits.

Using three-dimensional mapping tools, Hussein has been able to piece together how the burials were arranged. His findings confirm papyrus documents recovered from Saqqara more than a century ago suggesting that enterprising embalmers packed dozens of bodies into the burial shaft, then collected fees or exchanged parcels of land in return for the spiritual upkeep of each mummy. (Learn how cultures around the world have mummified their dead.)

Ancient Egyptian society included an entire class of priests dedicated to caring for the spirits of the dead. Their job description included maintaining tombs and praying for their departed owners. Some owned dozens of tombs, with hundreds of mummies packed into each one.

“People had to bring weekly offerings to the dead to keep them alive,” says Koen Donker van Heel, an Egyptologist at the University of Leiden who has spent years studying the legal contracts priests signed with the families of the dead. “Dead people are money. That’s basically it.”

For the first time, archaeological evidence is confirming what until now has only been guessed at based on inscriptions and millennia-old legal documents. Insights like that make the Saqqara excavation special. It’s part of a shift in Egyptology: Researchers are looking harder at details that illuminate the lives of everyday Egyptians, rather than focus on the fanciest tombs.

“Ramadan is getting a lot of information that was simply lost in the past,” says Raue, the Leipzig curator. “There was a whole infrastructure above ground that was simply removed without documentation.”

That means the future could hold more such discoveries for excavators patient enough to look. While poring over old dig reports, Hussein realized the shaft leading to the mummification workshop was located less than three feet from where French and Egyptian excavators stopped searching in 1899. The chamber and its contents were hidden by the sand they hastily shoveled aside.

“Perhaps we need to go back to the sites that were explored in the 1800s and early 1900s,” Hussein says, “and excavate them again.”