The elusive horror of Hiroshima

The U.S. warplane that dropped the first atomic bomb took aim at Hiroshima’s Aioi Bridge, whose distinctive T shape was visible from high above. The bridge, like the city surrounding it, has been rebuilt, and few physical scars remain from the devastating blast.

The official plans had been appropriately grand: 11,500 attendees would gather in Hiroshima’s Peace Memorial Park for a somber ceremony commemorating the 75th anniversary of the atomic bombing of the city by the United States on August 6, 1945. But the pandemic had other plans.

As it has done in most cities around the world, the COVID-19 virus has altered or canceled much of Hiroshima’s daily life: concerts, marathons, museum exhibits. The anniversary ceremony will still take place on August 6, albeit with 10,000 fewer attendees. Only bomb survivors—or hibakusha—and their families may now attend. Audience members will be seated six feet apart in the park. World leaders, no longer able to attend in person, have been asked to submit video messages instead.

Hiroshima is harrowingly familiar with abrupt, unfathomable tragedy. But when I visited the city in late 2018, I was struck by how ordinary it looked and felt. I recall sitting on the narrow, elegant Motoyasu Bridge watching a bustling morning scene. Briefcase-carrying commuters in suits walked and biked across the bridge. Schoolchildren in uniforms skipped by in small groups. Nearby, a riverside café with a pretty fruit stand and ice cream stall out front was getting ready to open.

It could have been a scene from any city. But Hiroshima, of course, is not just any city. About 500 yards north of Motoyasu Bridge stands another bridge, the Aioi. The span was the original target for the bombing crew of the Enola Gay, which dropped a nearly 10,000-pound uranium bomb that detonated close to the spot where I was perched.

I was in Hiroshima to do research and conduct interviews for my book about World War II reporter John Hersey—the first journalist to reveal the true aftermath of the bomb here, particularly its radioactive impact on human beings. I was especially keen to meet Koko Tanimoto Kondo, a prominent peace activist and one of the last surviving protagonists of Hersey’s blockbuster article, “Hiroshima,” which was published in the August 31, 1946, issue of the New Yorker and later became a book.

OFFICE OF HISTORY AND HERITAGE RESOURCES 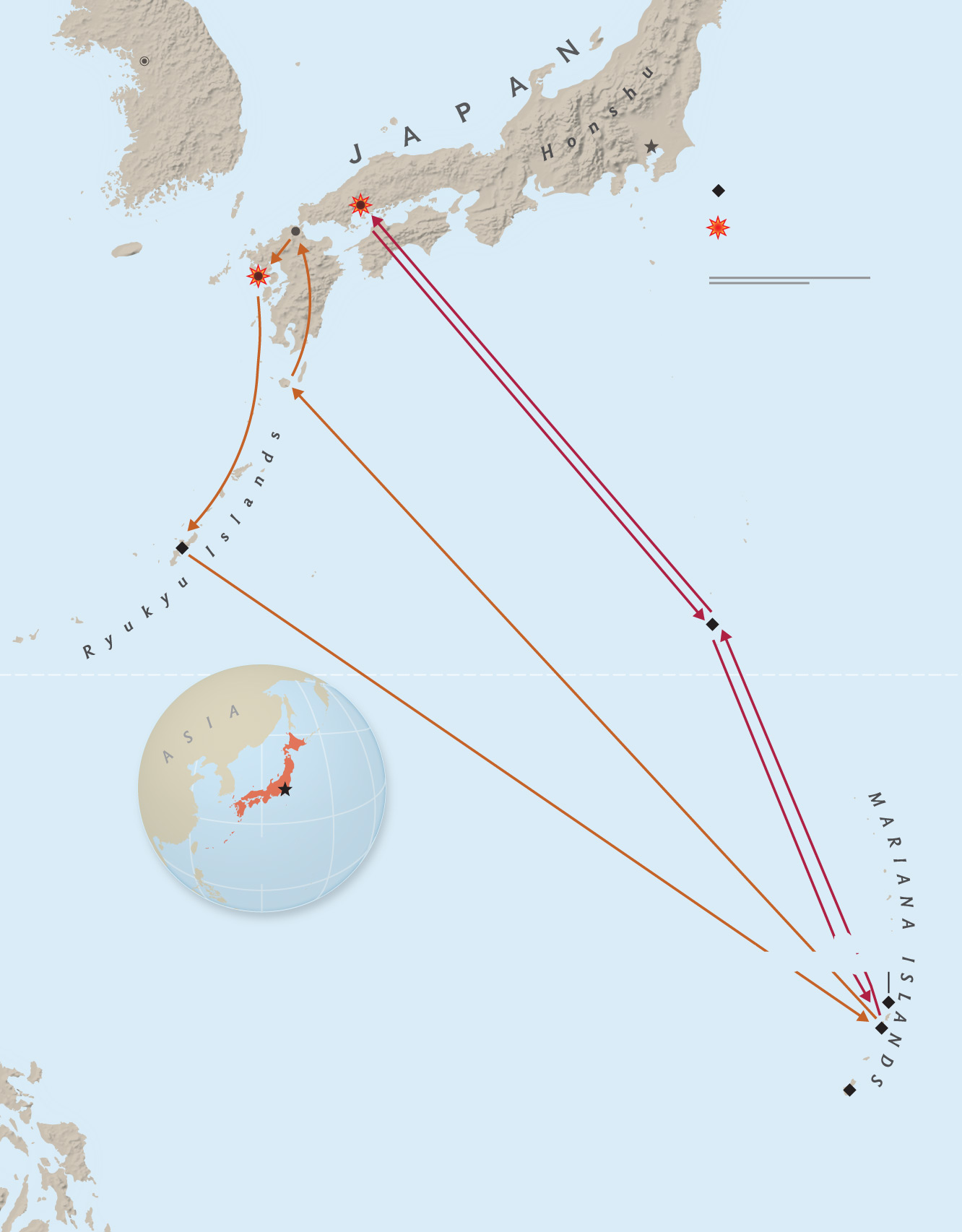 When Hersey arrived in Hiroshima in 1946, eight months after the bombing, he found a post-apocalyptic wasteland. Now Hiroshima Prefecture is home to nearly three million people and is a major tourist destination. There’s a world-class museum documenting the event, as well as many monuments. Among them: the Genbaku Dome, one of the few structures left standing in the city center after the bomb fell and now a UNESCO World Heritage Site.

Hiroshima’s leaders say they want the city to be regarded by the world in two ways: as a cautionary tale—a warning about the horrors of nuclear warfare—and as a phoenix that survived those horrors and resurrected itself, a triumph of the human spirit.

When I met Ms. Kondo, she was alternately solemn and mischievous, with a pronounced gallows humor. She was then 74, but as we walked through the city together, I could hardly keep up with her. She told me that she and her mother, Chisa Tanimoto—also a blast survivor who lived to an advanced age—used to joke grimly that the bomb’s radiation had somehow preserved them.

As we walked down a wide, tree-lined boulevard that sunny morning, it was hard for me to comprehend that this was the site of the first nuclear attack in history, and that Ms. Kondo was one of the few humans on Earth to have witnessed and survived it. (For those who lived, memories of the bomb are impossible to forget.)

When the U.S. dropped the bomb—dubbed “Little Boy” and scribbled with profane messages to the Japanese emperor—on Hiroshima, tens of thousands of people were burned to death or buried alive by collapsing buildings or bludgeoned by flying debris. Those directly under the bomb’s detonation point, or hypocenter, were incinerated, instantaneously erased from existence. The true death toll—estimates have ranged between 100,000 and 280,000—will never be known.

“You dig two feet and there are [still] bones,” Hidehiko Yuzaki, the governor of Hiroshima Prefecture, told me. “We’re living on that. Not only near the epicenter, but across the city.”

At the time of the bombing, Ms. Kondo—then just over eight months old—was in her mother’s arms in their house near the city center. The house collapsed on top of them, but her mother managed to free them from the debris and escape before a wall of flame consumed the area.

That day and night, as hellish fires and whirlwinds tore through the ruins, and blast survivors tried to find refuge in the city’s few surviving parks, the Japanese government in Tokyo had a difficult time processing what had happened. Had the city been attacked by a massive force of B-29s? Had a new sort of weapon been used? How else could such devastation be explained?

A professor named Yoshio Nishina, Japan’s chief nuclear physicist and leader of the country’s own atomic bomb effort, was dispatched to Hiroshima. On August 8, he reported back to the Japanese government. The city, he said, was “completely wiped out.” What he had seen there was “unspeakable.”

“I’m very sorry to tell you this,” he wrote. “The so-called new-type bomb is actually an atomic bomb.” (Related: The U.S. planned to drop more than two atomic bombs on Japan.)

The bomb had exploded slightly northwest of the city’s center. A Japanese report soon estimated that nearly 66,500 buildings had been razed or damaged. A subsequent U.S. report commented that Hiroshima had been “uniformly and extensively devastated” and noted that a bomb-induced “fire-storm” had contributed to the devastation.

A few weeks later, foreign correspondents began trying to get into Hiroshima. The first, Leslie Nakashima—who before the war had possessed both American and Japanese citizenship and been stranded in Japan for the duration of the conflict—confirmed in a United Press dispatch that the city of 300,000 had been obliterated. “I was dumbfounded with the destruction before me,” he wrote. At the city center near where the bomb exploded, only the skeletons of three concrete buildings were still standing. It was being said, he reported, that Hiroshima might remain uninhabitable for 75 years.

Yet within 24 hours, survivors were already returning to the city to search for relatives, friends, and former homes in the rubble. Ms. Kondo’s family was among those who would return and rebuild their lives upon the ashes.

Soon tens of thousands of occupation troops arrived in both Hiroshima and Nagasaki, destroyed by a second atomic bomb three days after Hiroshima. Even though the flattened cities were essentially graveyards, they were treated less than reverently by some of the “occupationaires,” as they called themselves. (Shifting circumstances and last-minute choices doomed the Nagasaki.)

In Nagasaki, U.S. Marines cleared bomb debris to play a football game, which they dubbed the Atom Bowl. Over the next year, many soldiers came to Hiroshima’s ground zero to have their picture taken and collect “bomb souvenirs.” It was a “treasure area” of buried curios and heirlooms, recalled one visiting American doctor, who gathered up a few broken porcelain cups to use for ashtrays. But fear of possible residual radiation kept warier occupationaires away from the hypocenter site.

By the time Hersey arrived in Hiroshima in May 1946, survivors who had returned there were impoverished and starving. Weeds were pushing up through the rubble—among them, aptly named species like panic grass and feverfew.

When Hersey’s article appeared in the New Yorker, it created an international furor. One of his editors asked him to consider returning to the city to write a follow-up, but Hersey would not return for 40 years. When he finally visited Hiroshima, in 1985, he found that “a gaudy phoenix had risen from the ruinous desert of 1945.” The city’s population had grown to more than a million; trees lined new, broad avenues. There were, he observed, hundreds of bookstores and thousands of bars. (This 390-year-old bonsai survived the blast, but it's story was nearly forgotten.)

Another of Hersey’s protagonists, Toshiko Sasaki—a young clerk at the East Asia Tin Works at the time of the bombing who's now deceased—had also been stunned by the rapid rebuilding. “I wouldn’t say the city is being reconstructed,” she once commented, “so much as it’s a completely new city.”

When I interviewed Ms. Kondo in the lobby of a boxy, modern hotel on Peace Boulevard, she told me about August 6, 1945. Although she was too young then to remember the events herself, her mother told her about the day—but not until Ms. Kondo was much older.

"I could not ask my parents how I survived," she told me. "I knew if I asked, they would have to recall the worst day of their life. When I was 40, she told me what happened. The whole house crashed, everything on top of her body, which protected me. She was unconscious, and when she came to, it was dark. There was no light coming through. She heard a baby’s crying voice—it was mine. It was her own baby. She thought it was someone else’s. My mother called, 'Please, help!'—but no one came. Then she could see the small light coming through the [rubble]. And she moved little by little and made a hole, and got out with me." All they saw when they emerged was fire engulfing their neighborhood.

Ms. Kondo also showed me a family photo album from the years that followed. Then she opened a plastic bag and took out the tiny pink cotton dress she’d worn that day. Remarkably intact, the garment brought the catastrophe to life for me. The Hiroshima Peace Memorial Museum is filled with such humanizing artifacts: a broken watch that stopped exactly at 8:15 A.M., a scalded tricycle unearthed from the ruins.

After the interview, we strolled to a small Italian restaurant near the museum for lunch. I noticed that many American businesses had set up in the city; McDonalds and Starbucks franchises loosely ring Peace Memorial Park. After lunch we visited the memorials and monuments in the park. Visitors lined up before the Cenotaph for Atomic Bomb Victims, several bowing quietly before it. We walked back to the Aioi Bridge, the Enola Gay’s target. When the bomber dropped Little Boy, it drifted in the air and detonated slightly off-target. Where, I asked Ms. Kondo, is the literal hypocenter?

“The first atomic bomb used in the history of humankind exploded approximately 600 meters above this spot,” it read. “The city below was hit by heat rays of approximately 3,000 to 4,000 degrees C, along with a blast wind and radiation. Most people in the area lost their lives instantly.”

I found myself irrationally looking straight up into the air, almost as if expecting to see something there too, some impossible remnant or marker. But all I saw was the blue sky above—as sun-filled as it had been on the morning of August 6, 1945.

Lesley M. M. Blume is a journalist, historian, and New York Times bestselling author. Her new book, Fallout: The Hiroshima Cover-Up and the Reporter Who Revealed It to the World, was released on August 4.

Hiroki Kobayashi is a Tokyo based photographer who concentrates on cultural issues and is a regular contributor to National Geographic.