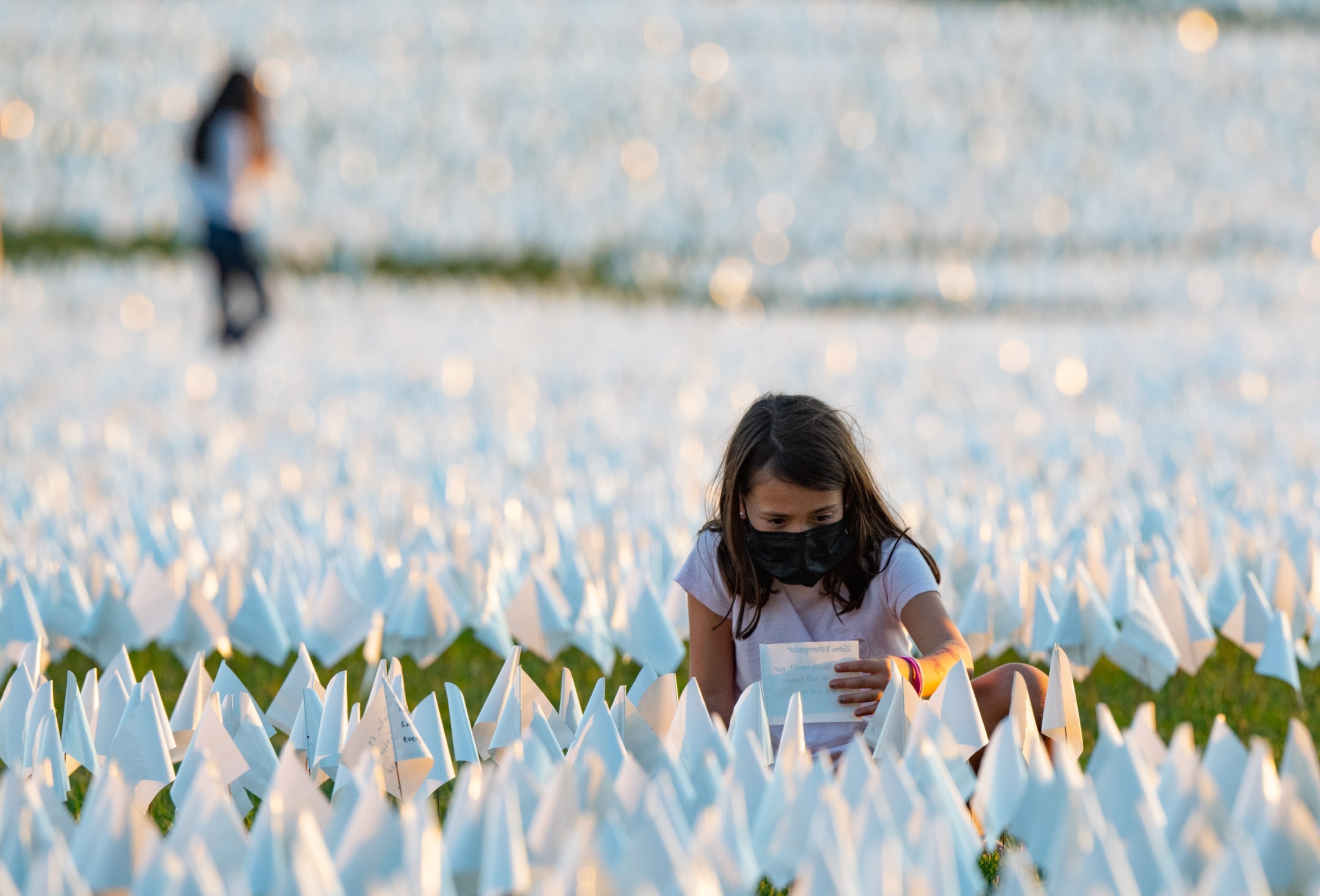 For more than a century, the 1918 flu held that grim distinction. Here’s what made that outbreak so devastating.

White flags on the National Mall mark each of the more than 675,000 lives lost to COVID-19—which is has now overtaken the death toll of the 1918 flu pandemic. In September 2021, volunteers planted hundreds of thousands of flags as part of a memorial art installation in Washington, D.C.

COVID-19 is now the deadliest disease in American history, surpassing the death toll of the devastating 1918 flu pandemic. More than 676,000 people in the United States have lost their lives to the disease in the last year and a half since the World Health Organization first declared a pandemic on March 11, 2020.

For more than a century, the influenza outbreak of 1918 held that grim distinction. Over three distinct waves, the virus infected more than a quarter of the U.S. population and caused average life expectancy to drop by 12 years. Here’s a look at the catastrophic damage that it caused as it spread swiftly across the globe—and the implications for modern pandemics.

Even though it is known colloquially as the Spanish flu, the first recorded cases of the 1918 influenza outbreak were in the U.S.—not Spain. In early March 1918, the final year of World War I, a soldier reported to the infirmary at an Army training camp in Fort Riley, Kansas, with a fever and other flu-like symptoms. According to National Geographic History magazine, more than a hundred other soldiers came down with similar symptoms within a few hours.

(Here’s why some historians believe the virus originated in China.)

The disease quickly swept the world as hundreds of thousands of American soldiers deployed to the European frontlines of the First World War. Wartime censorship meant that the U.S. and European media were not permitted to report on the outbreaks. Spain, however, was neutral in the conflict. The country’s newspapers reported so extensively on the disease that it soon became known as the Spanish flu.

However, this early outbreak was not especially severe. Most people recovered within days, and some physicians debated whether it was truly influenza at all. As one Spanish news agency wrote in a cable to London at the time, “A Strange Form Of Disease Of Epidemic Character Has Appeared In Madrid. The Epidemic Is Of A Mild Nature, No Deaths Having Been Reported.”

Everything changed that fall. In September 1918, a far deadlier second wave of the pandemic emerged at another U.S. Army training camp outside of Boston, Massachusetts. In October alone, the second wave killed an estimated 195,000 Americans—more than the total American military casualties of World War I. Historian Pete Davies described the scene at a U.S. Army camp in his book The Devil’s Flu: “...as their lungs failed and their bodies were starved of oxygen, men turned blue, or purple, or grey-black. Bodies lay stacked like logs in the corridors to the mortuary.”

Symptoms in the second wave were different, too. In addition to the typical flu-like symptoms of the first wave, that fall physicians reported unusual symptoms that ranged from hemorrhaging from the nose and stomach to paralysis. The second wave also targeted younger people, with most deaths recorded among those between the ages of 20 and 40.

As flu cases mounted across the country, cities took varying approaches to flatten the curve, as Nina Strochlic and Riley Champine reported for National Geographic in 2020. St. Louis quickly shut down public gatherings and implemented quarantines when its first cases were reported, whereas Philadelphia hosted a parade with some 200,000 people in attendance. By the end of the pandemic, Philadelphia had recorded a rate of 748 deaths per 100,000 people—more than twice that of St. Louis.

By the end of 1918, many U.S. cities—including Philadelphia—were able to suppress the pandemic’s second wave with the help of social distancing measures. But in January 1919, the third and final wave of the influenza pandemic hit.

Although the ferocity of the disease had diminished by its third wave, it still managed to do considerable damage. Eager to return to normal after months of quarantine, few U.S. cities reinstated their restrictions, writes historian John M. Barry. They continued to see outbreaks and deaths through the spring of 1919.

The third wave also coincided with the end of World War I—and some historians believe it may have affected peace treaty negotiations. In April 1919, President Woodrow Wilson came down with the Spanish flu while in Paris to discuss terms for ending the war. Some historians believe that although Wilson sought to de-escalate tensions, he was so exhausted by the flu that he gave in to the harsher terms put forth by the French prime minister.

(These U.S. presidents battled serious illnesses while in office.)

Estimates suggest that the Spanish flu killed as many as 675,000 Americans from September 1918 to June 1919—and somewhere between 60 and 100 million people worldwide. But historians caution that U.S. estimates are not precise but rather are an extrapolation from a sample population that was disproportionately white people who lived in cities.

More than a hundred years later, as the world grapples with yet another deadly disease, historians and scientists alike have pointed to the 1918 flu pandemic for evidence on how to fight COVID-19. In particular, they cite the importance of public health measures like social distancing and masking. But those lessons have their limits.

“Looking back across the last century, we can see that the ‘War to End All Wars’ did not, in fact, end wars, and that the deadliest pandemic did not end deadly pandemics,” write Anthony Fauci and two other officials with the National Institute of Allergy and Infectious Diseases in a paper published in the American Journal of Public Health. “A century later, tragic wars and tragic pandemics are still occurring, and we are still struggling to deal with them.”