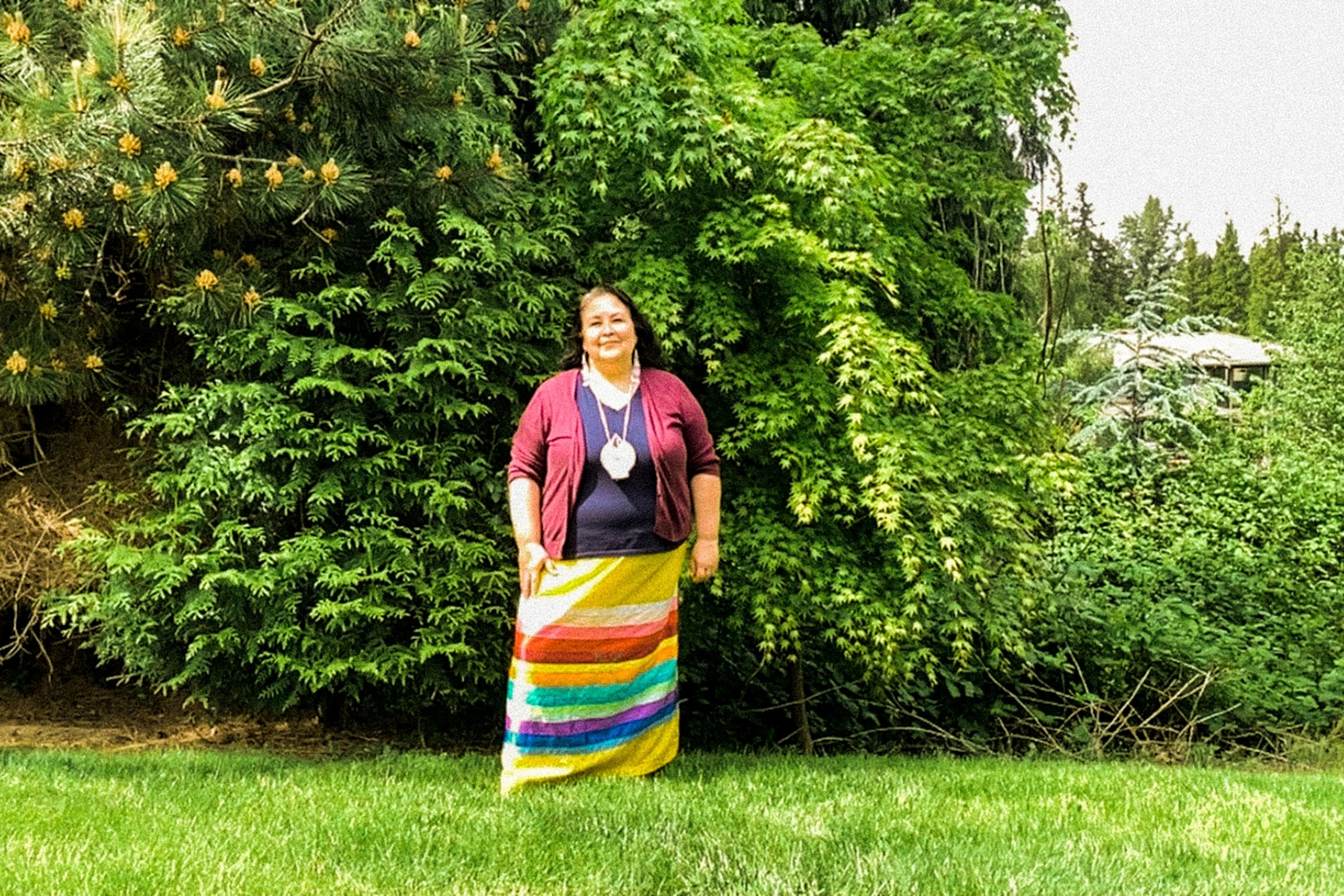 Traditional indigenous beliefs are a powerful tool for understanding the pandemic

Native American spiritual leaders say this is a time to recalibrate for a better future.

Jillene Joseph, a member of the Gros Ventre or Aaniiih people, enjoys a moment of sunshine at her home in Gresham, Oregon. The director of the Native Wellness Institute is deeply worried about the effects of the coronavirus pandemic, but she also wants people to consider “the blessings of this virus.” Because of social distancing, photographer Josué Rivas took the portraits in this story through videocalls.

“What are we going to do?” Jillene Joseph asked the board of the Native Wellness Institute. It wasn’t a rhetorical question.

It was mid-March, and the board was holding an emergency meeting as schools and businesses began shutting down due to the novel coronavirus. The Oregon-based institute addresses trauma in indigenous communities, usually through in-person trainings that are rooted in ancestral teachings and traditions. Joseph, the executive director, knew she had to find a new way to help community members who were adjusting to stay-at-home orders.

Native Americans are especially vulnerable to COVID-19 due to underlying health issues such as diabetes and heart disease, as well as crowded multigenerational homes. On reservations, where roughly half of Native Americans live, not everyone has indoor plumbing or electricity, making it difficult to follow the guidelines to wash hands regularly in hot water. As a result, Navajo Nation, the largest reservation in the United States, has an infection rate nearly as high as that of New York and New Jersey. As of May 11 there have been 102 confirmed deaths.

“An already traumatized people are being retraumatized,” says Joseph, a member of the Gros Ventre or Aaniiih people who are from Fort Belknap, Montana. Managing the pandemic’s psychological and spiritual toll has become her focus.

As a community health practitioner, Joseph sees traditional cultural beliefs and practices as powerful tools for helping indigenous people understand this pandemic. She is not alone. With an emphasis on community, resilience, and a holistic relationship with nature, spiritual leaders from different tribes express guarded optimism that people of all backgrounds will learn from the lessons coronavirus has to teach.

For indigenous people, history plays an unavoidable role in interpreting the pandemic. One elder from Michigan called Joseph to talk about how difficult it’s been for her to care for herself and her family. After some reflection, the woman realized why: She was weighed down by thoughts of the smallpox epidemic that had killed so many Native Americans. She felt she needed to forgive the U.S. government for intentionally giving her people the illness.

While documentary evidence that Europeans or Americans purposely spread smallpox is scarce, there’s little doubt that colonizers brought infectious diseases that killed an estimated 90 percent—some 20 million people or more—of the indigenous population in the Americas. “Even though we may not have been alive in the time of the smallpox epidemic, that’s in our blood memory,” says Joseph, “just as historical resiliency is also in our blood memory.”

Those deeply rooted experiences can lead to acceptance, especially among elders. “They have been through so much and experienced so much that there’s no need to fear or even panic,” says Tiokasin Ghosthorse, the Stoneridge, New York-based host of First Voices Radio and a member of the Cheyenne River Lakota Nation from South Dakota. “It’s almost like this [pandemic] is familiar.”

As such, indigenous communities aren’t dwelling on the pandemic’s backstory. “Indigenous peoples don’t always need to go and explain what happened, why it happened,” says the Reverend David Wilson, a Methodist minister in Oklahoma City and member of the Choctaw Nation. “We just know it’s there.”

“We’re taught not to think of nature as separate,” explains Ghosthorse, and that includes COVID-19. “The coronavirus is a being,” he says. “And we have to respect that being in an ‘awe state’ and a ‘wonder state’ because it has come to us as a medicine” to treat spiritual ills.

At a time when people around the world are sheltering in place, maintaining meaningful connections is vital. Native American leaders are finding creative ways to reach out. In an effort to bring positivity, calm, and reassurance to indigenous people, Joseph and her colleagues tapped into the community of Native American storytellers, musicians, healers, and even comedians to create the Native Wellness Power Hour.

Since it launched on March 21, thousands have clicked into the institute’s Facebook page to listen to prayer songs, lectures on navigating healing associated with PTSD, especially related to the ongoing epidemic of missing and murdered indigenous women, or just to dance along with others tuning in from around the country.

In Oklahoma, Native American Methodists sent videos of themselves singing tribal hymns to the Oklahoma Indian Missionary Conference, which incorporated them into virtual church services. “We work hard to keep people connected to our culture and our language,” says Wilson, who is the conference’s superintendent. “Most of the people who have texted me or called me say, man, we love that—especially the hymns.”

Lessons for the future

While this pandemic is presenting an opportunity to find meaningful ways to connect, it’s also a wake-up call with important lessons for the future. “If we don’t learn from now,” warns Mindahi Bastida Muñoz, general coordinator of the Otomi-Toltec Regional Council in Mexico, “then another thing, more powerful, is going to come.”

Bastida, who is also the director of the Original Caretakers program at the Center for Earth Ethics in New York City, says the world is out of balance and that anthropocentrism—our human-centric outlook—is the cause. “We think that we are the ones who can decide everything,” he says, “but we are killing ourselves.”

“Mother Earth is saying, ‘please listen,’” adds Joyce Bryant, known as Grandmother Sasa, the Abenaki founder of a healing center in New Hampshire. “We have to care about others. You know, the grass, the trees, the plants, the air, the water—all are extensions of ourselves. And they teach us.”

“Living in harmony with Mother Earth is a lot of work,” says Bastida, but it can be done by reviving the indigenous idea that humans serve as caregivers of nature. He’s working with spiritual leaders across the world to return to the old ways—producing food by hand, finding medicine in plants, animals, and minerals, and performing rituals and ceremonies that send prayers to Mother Earth.

Perhaps the biggest lesson that indigenous spiritual leaders hope people will take from the pandemic is that it’s a time to be still, to reflect, and to listen to elders. Both Joseph and Wilson likened this period of stay-at-home orders to a long winter, when people would traditionally stay inside and listen to stories. According to Joseph, it’s like Earth is saying “not today, humans, you need some more reflection.”

Please be respectful of copyright. Unauthorized use is prohibited.
Rachel Hartigan Shea is a staff writer covering history and culture for National Geographic.
Josué Rivas (Mexica/Otomi) is a Portland-based photographer and educator working at the intersection of art, journalism, and social justice. Follow him on Instagram.
10:39

Related: Inside Deb Haaland’s historic bid to become one of the first Native congresswomen

For centuries, Native communities have fought disenfranchisement and marginalization. Now, Haaland will join another Native woman in U.S. Congress after a groundbreaking election.