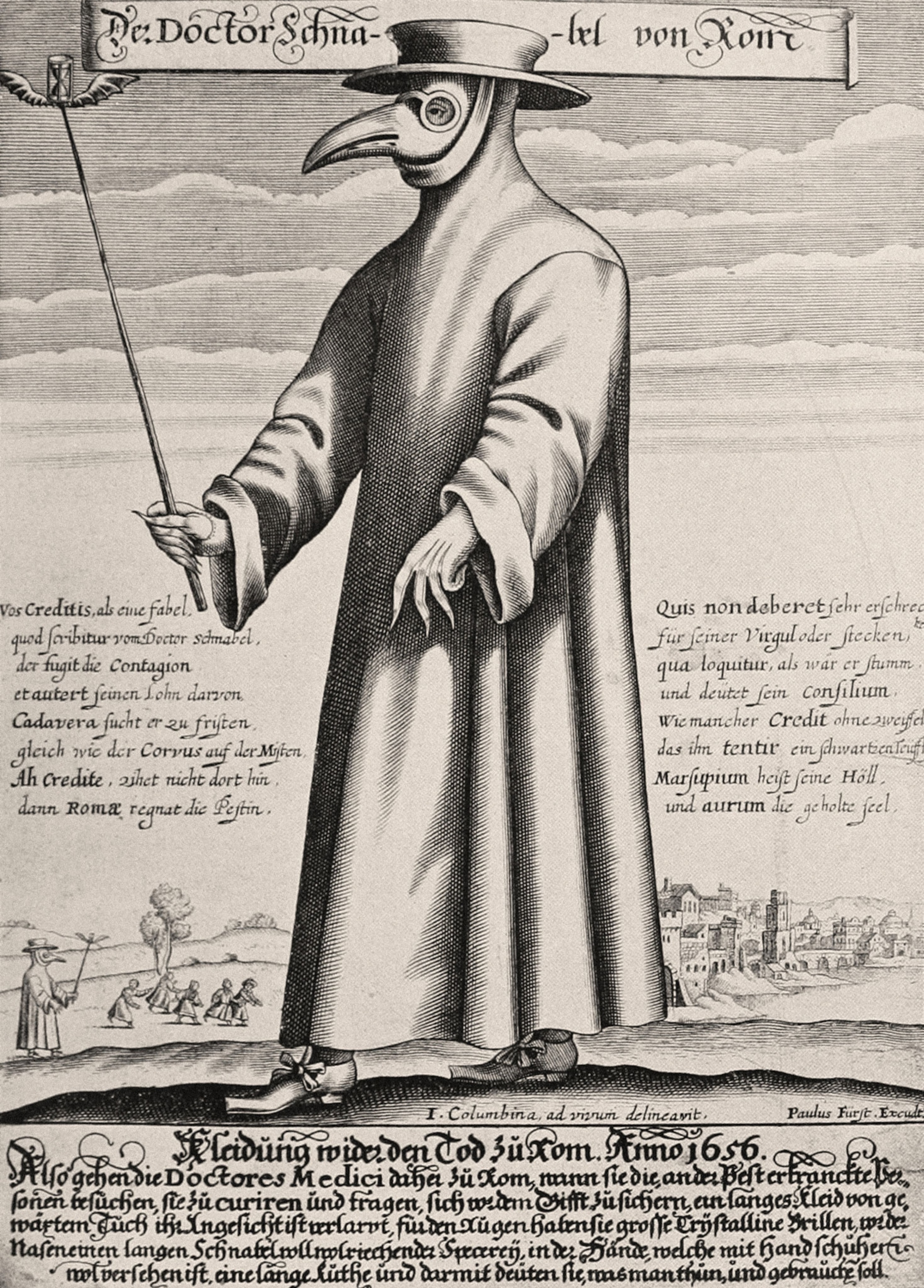 In the 17th century, people believed these outfits could purify poisonous air. They were wrong.

During the 17th-century European plague, physicians wore beaked masks, leather gloves, and long coats in an attempt to fend off the disease. Their iconic and ominous look, as depicted in this 1656 engraving of a Roman doctor, is recognizable to this day.

The plague was once the most feared disease in the world, capable of wiping out hundreds of millions of people in seemingly unstoppable global pandemics and afflicting its victims with painfully swollen lymph nodes, blackened skin, and other gruesome symptoms.

In 17th-century Europe, the physicians who tended to plague victims wore a costume that has since taken on sinister overtones: they covered themselves head to toe and wore a mask with a long bird-like beak. The reason behind the beaked plague masks was a misconception about the very nature of the dangerous disease.

During that period's outbreaks of the bubonic plague—a pandemic that recurred in Europe for centuries—towns gripped by the disease hired plague doctors who practiced what passed for medicine on rich and poor residents alike. These physicians prescribed what were believed to be protective concoctions and plague antidotes, witnessed wills, and performed autopsies—and some did so while wearing beaked masks.

The costume is usually credited to Charles de Lorme, a physician who catered to the medical needs of many European royals during the 17th century, including King Louis XIII and Gaston d'Orléans, son of Marie de Médici. He described an outfit that included a coat covered in scented wax, breeches connected to boots, a tucked-in shirt, and a hat and gloves made of goat leather. Plague doctors also carried a rod that allowed them to poke (or fend off) victims.

Their head gear was particularly unusual: Plague doctors wore spectacles, de Lorme continued, and a mask with a nose “half a foot long, shaped like a beak, filled with perfume with only two holes, one on each side near the nostrils, but that can suffice to breathe and carry along with the air one breathes the impression of the [herbs] enclosed further along in the beak.”

Though plague doctors across Europe wore these outfits, the look was so iconic in Italy that the "plague doctor" became a staple of Italian commedia dell’arte and carnival celebrations—and is still a popular costume today. (Memories of the plague resonate in Venice during the coronavirus pandemic.)

But the forbidding ensemble was not just a deathly fashion statement: It was intended to protect the doctor from miasma. In the times before the germ theory of disease, physicians believed that the plague spread through poisoned air that could create an imbalance in a person’s humors, or bodily fluids. Sweet and pungent perfumes were thought to be able to fumigate plague-stricken areas and protect the smeller; nosegays, incense, and other perfumes were common in the era.

Plague doctors filled their masks with theriac, a compound of more than 55 herbs and other components like viper flesh powder, cinnamon, myrrh, and honey. De Lorme thought the beak shape of the mask would give the air sufficient time to be suffused by the protective herbs before it hit plague doctors’ nostrils and lungs.

In fact, plague is caused by Yersinia pestis, bacteria that can be transmitted from animals to humans and through flea bites, contact with contaminated fluid or tissue, and inhalation of infectious droplets from sneezing or coughing people with pneumonic plague.

What is plague? How many people died from the Black Death and the other plague pandemics? Learn about the bacterium behind the plague disease, how factors like trade and urbanization caused it to spread to every continent except Antarctica, and how three devastating pandemics helped shape modern medicine.

Three horrific plague pandemics swept across the globe before its cause was ultimately uncovered—the Plague of Justinian, which killed up to 10,000 people a day circa A.D. 561; the Black Death, which wiped out up to a third of Europeans between 1334 and 1372 and continued with intermittent outbreaks as late as 1879; and the Third Pandemic, which ravaged much of Asia between 1894 and 1959. (What is a pandemic—and why does it matter?)

Plague doctors may have been immediately recognizable, but until the rise of the germ theory of disease and modern antibiotics, their costumes didn’t provide real protection against the disease.