In Uganda, a unique urban experiment is under way

The world’s second largest refugee camp is slowly but surely transforming into a permanent city.

In Uganda, a unique urban experiment is under way

The world’s second largest refugee camp is slowly but surely transforming into a permanent city.

This story appears in the April 2019 issue of National Geographic magazine.

Standing in a sliver of shade cast by a solar streetlamp, David Kwaje plugs statistics into his smartphone.

Hidden from the harsh midday sun, he can see downhill to a row of white warehouses where residents collect food rations and beyond to two large tanks that supply water to roadside taps, yellow jerry cans radiating in all directions.

All week Kwaje has been walking along dirt roads, plotting every business, church, school, clinic, water tap, and light source on a digital map. At each stop he marks the location and asks detailed questions: Does your school have running water? What hours is this store open? How many doctors does the clinic have? By the time he and a half dozen other mappers finish, they’ll have created an open-source guide to an area that’s more than twice the size of Paris. 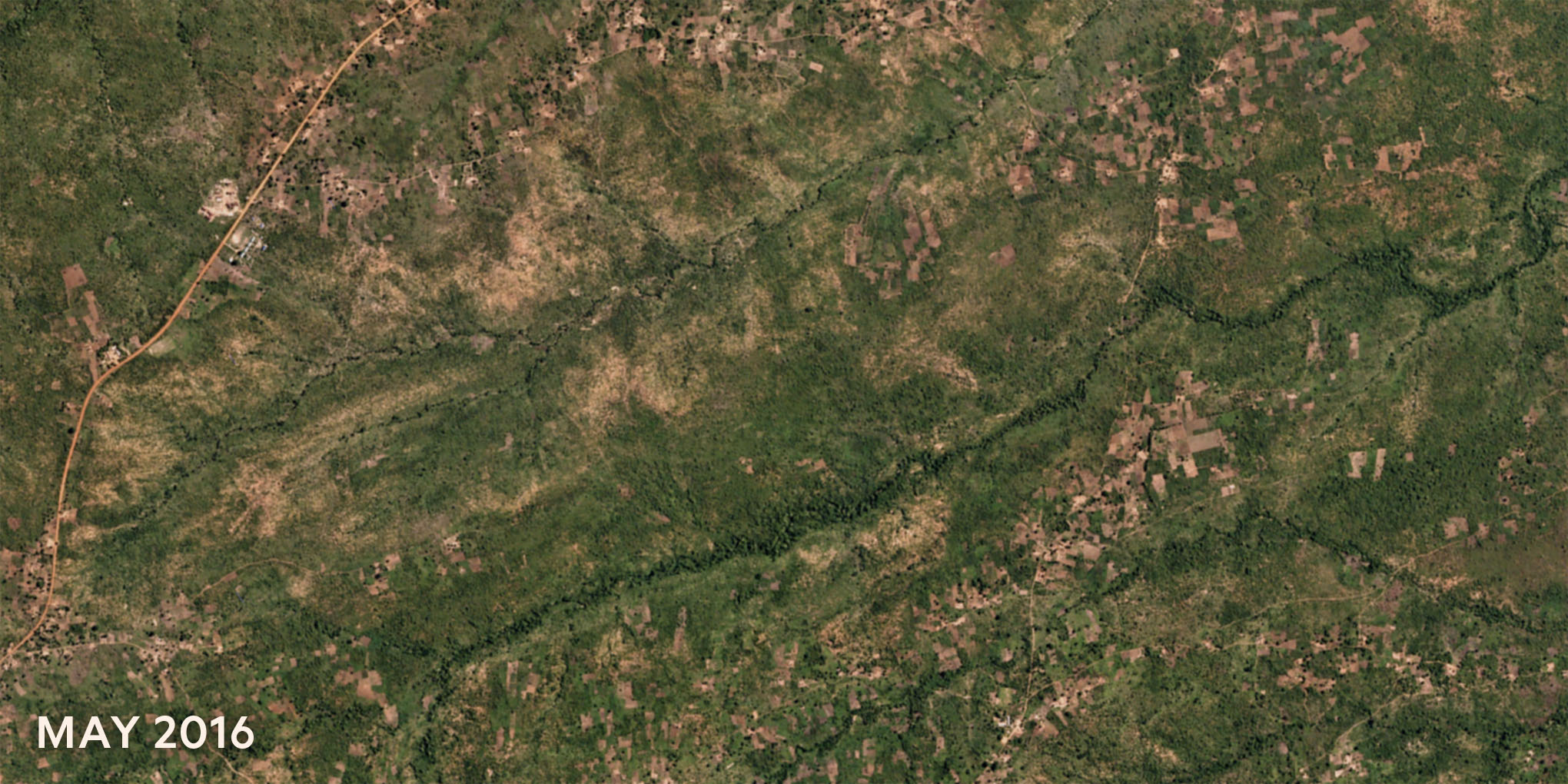 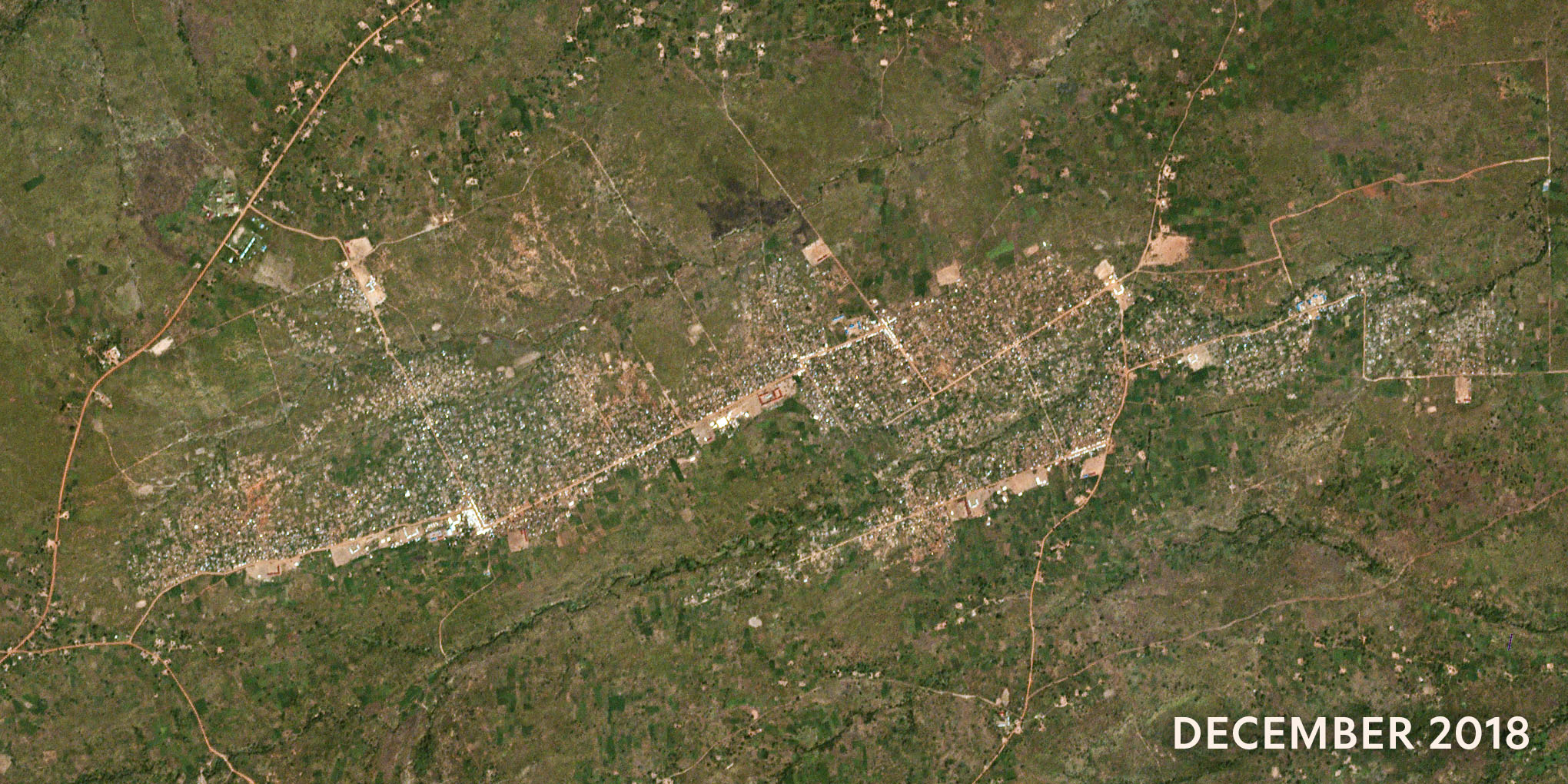 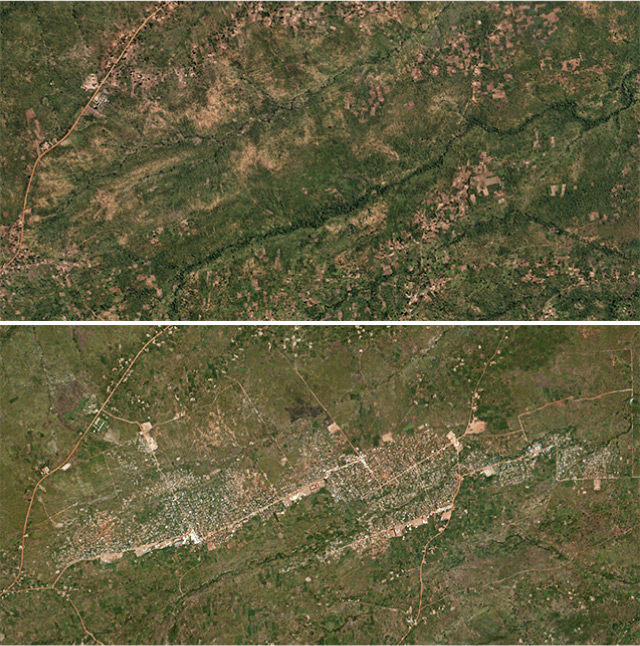 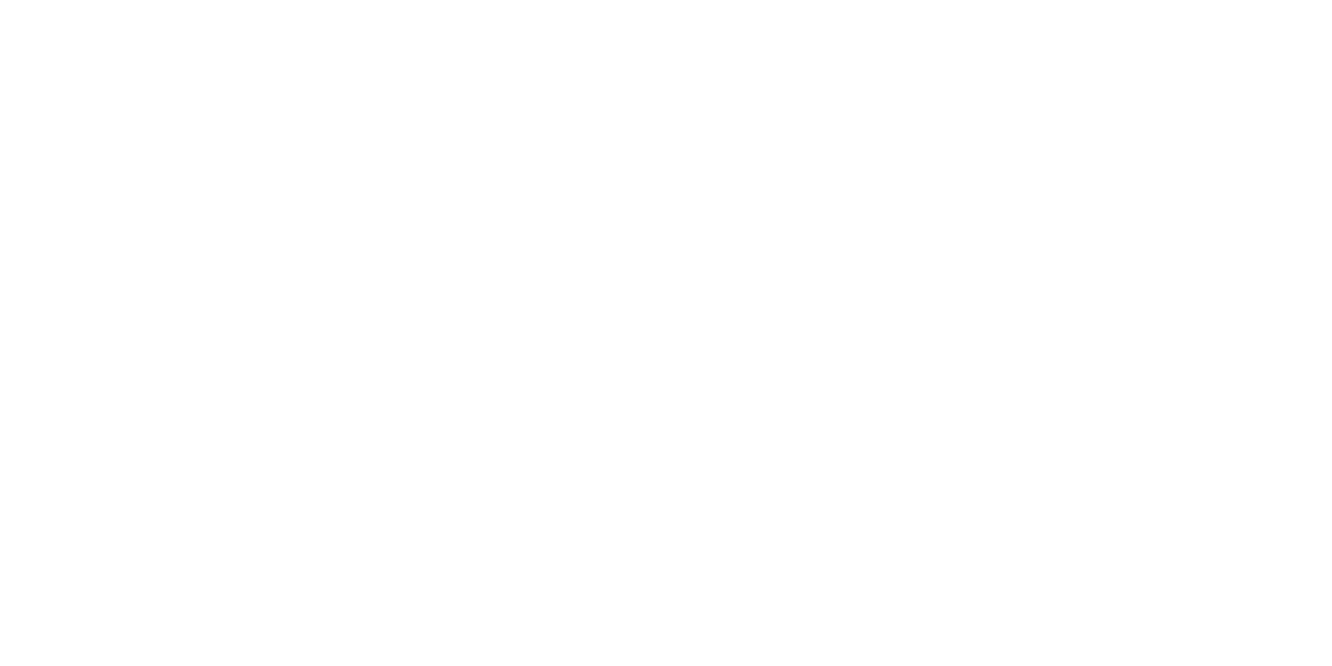 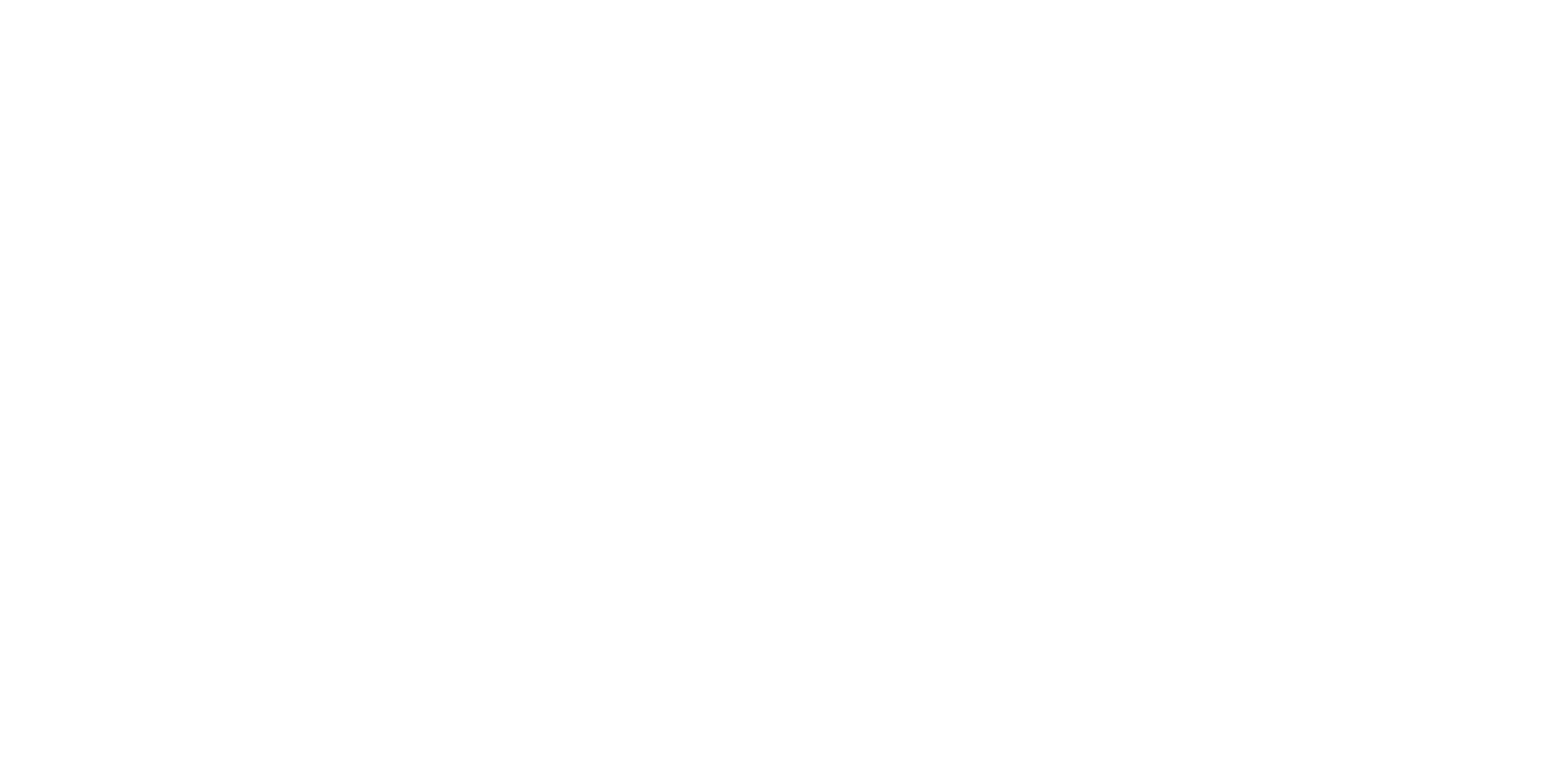 This is Bidibidi. With a quarter million people living in its many villages in northern Uganda, it’s the second largest refugee settlement in the world, after the Rohingya camp in Bangladesh.

Kwaje, who is 26, arrived two years ago. Around him a forest was razed and 250 miles of roads were carved through head-high grass and over streams to make room for a flood of South Sudanese fleeing war just a few hours north. He and his family built a cluster of mud-brick homes on a plot of land. He got married and had a son. Now, for the nonprofit Humanitarian OpenStreetMap Team, he’s documenting Bidibidi’s transformation from temporary camp to permanent city.

With a single earbud in, Kwaje crosses the road to one of Bidibidi’s five secondary schools. Thick tree limbs are enclosed by plastic tarps with window cutouts flapping in the wind. Kwaje is string bean tall and talkative, with a restless energy. But the day has been long, and as he walks across a rock-strewn courtyard, he’s overtaken by a heat-induced apathy—until he catches sight of a young man in a gray dress shirt. “This was my teacher in South Sudan!”

He jogs over for a hug then folds his gangly frame into a chair, pulls out his phone, and drills Soko Khamis, his former high school teacher and now the Bidibidi school’s academic director, with a series of questions, each punctuated by a finger snap: When did this school open? (February 2017.) Is this structure temporary? (Yes.) What are the challenges? (The bathrooms are falling apart. The students are hungry. Books are in short supply.)

“When are you going back to our school?” he asks.

“Ah,” Khamis sighs. “There is still war there.”

A great experiment is under way in Uganda. An industrial skyline of water and cell towers hovers over sturdy mud huts and small farm plots. Schools and health centers are built from brick, slathered in concrete, and fitted with glass windows. Taps run freshwater, and small solar panels power streetlights, as well as radios blasting music from barbershops, televisions airing soccer matches in community halls, and cell phones snaking from charging stations in shops. 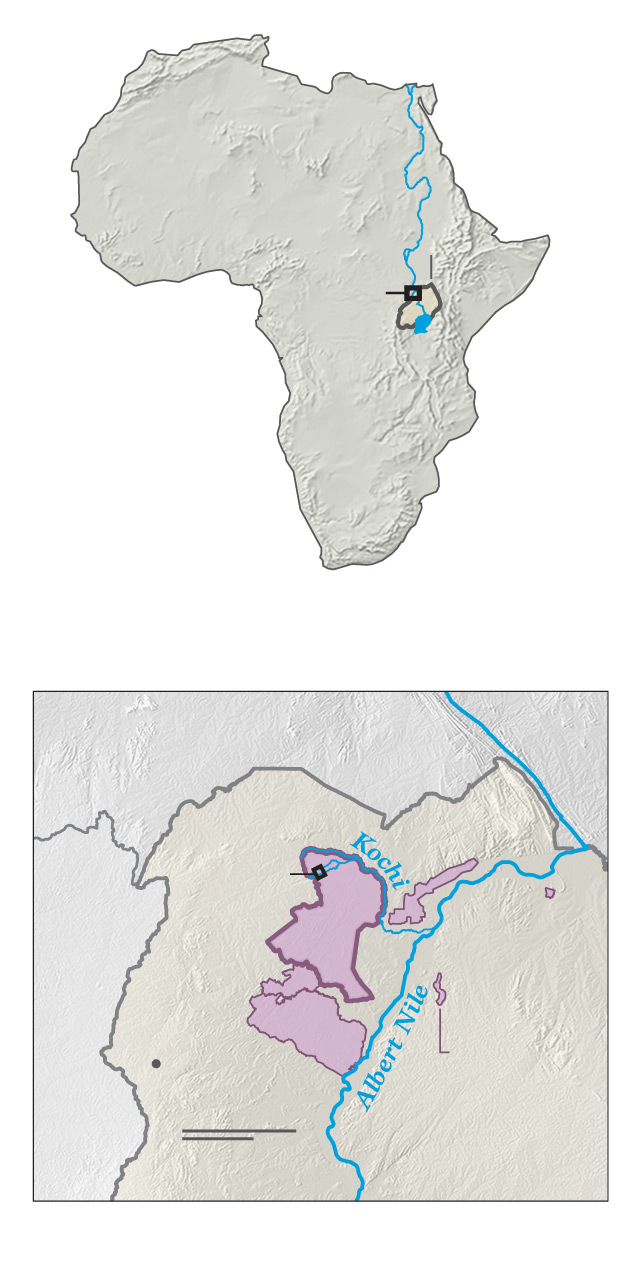 in Bidibidi and other nearby settlements. 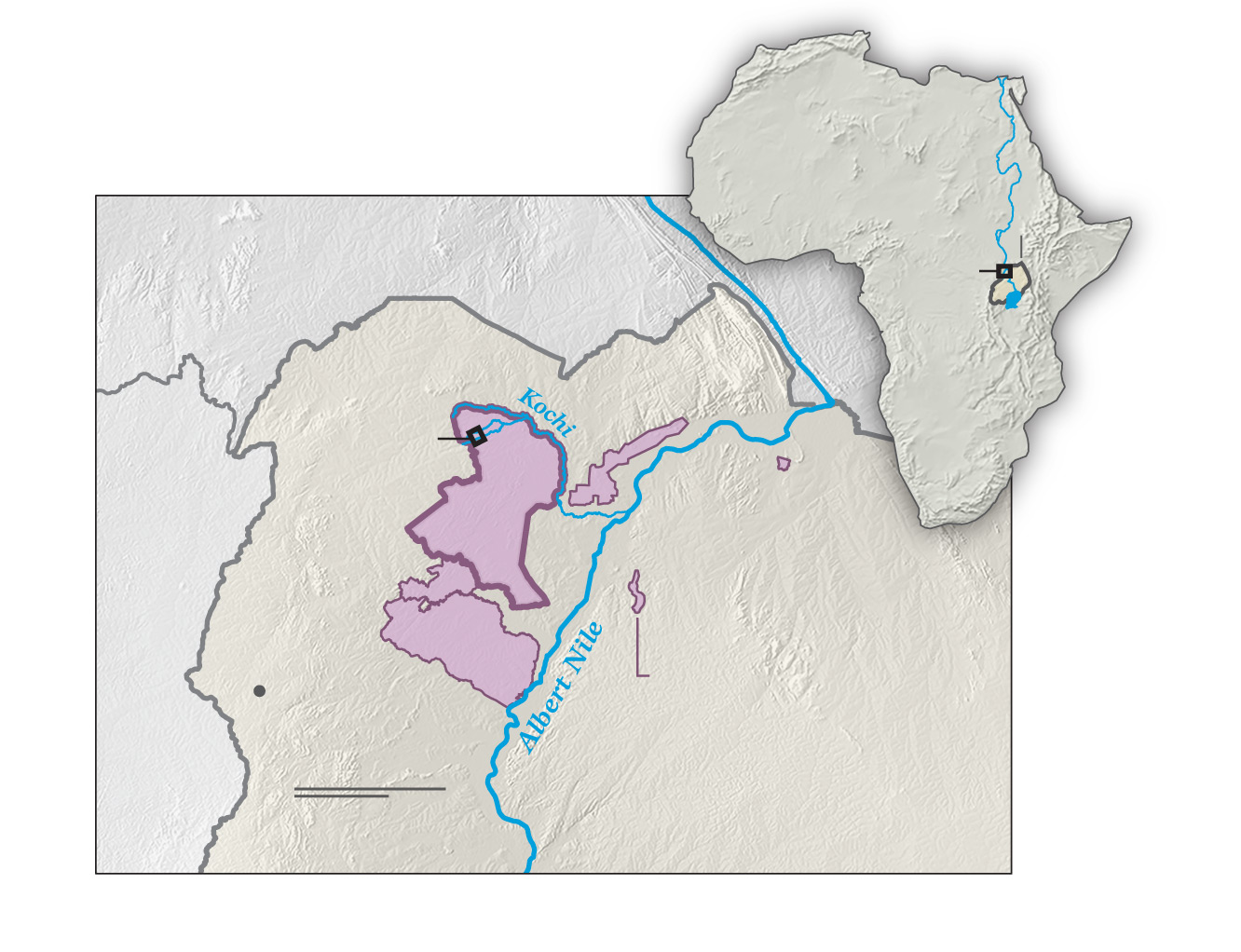 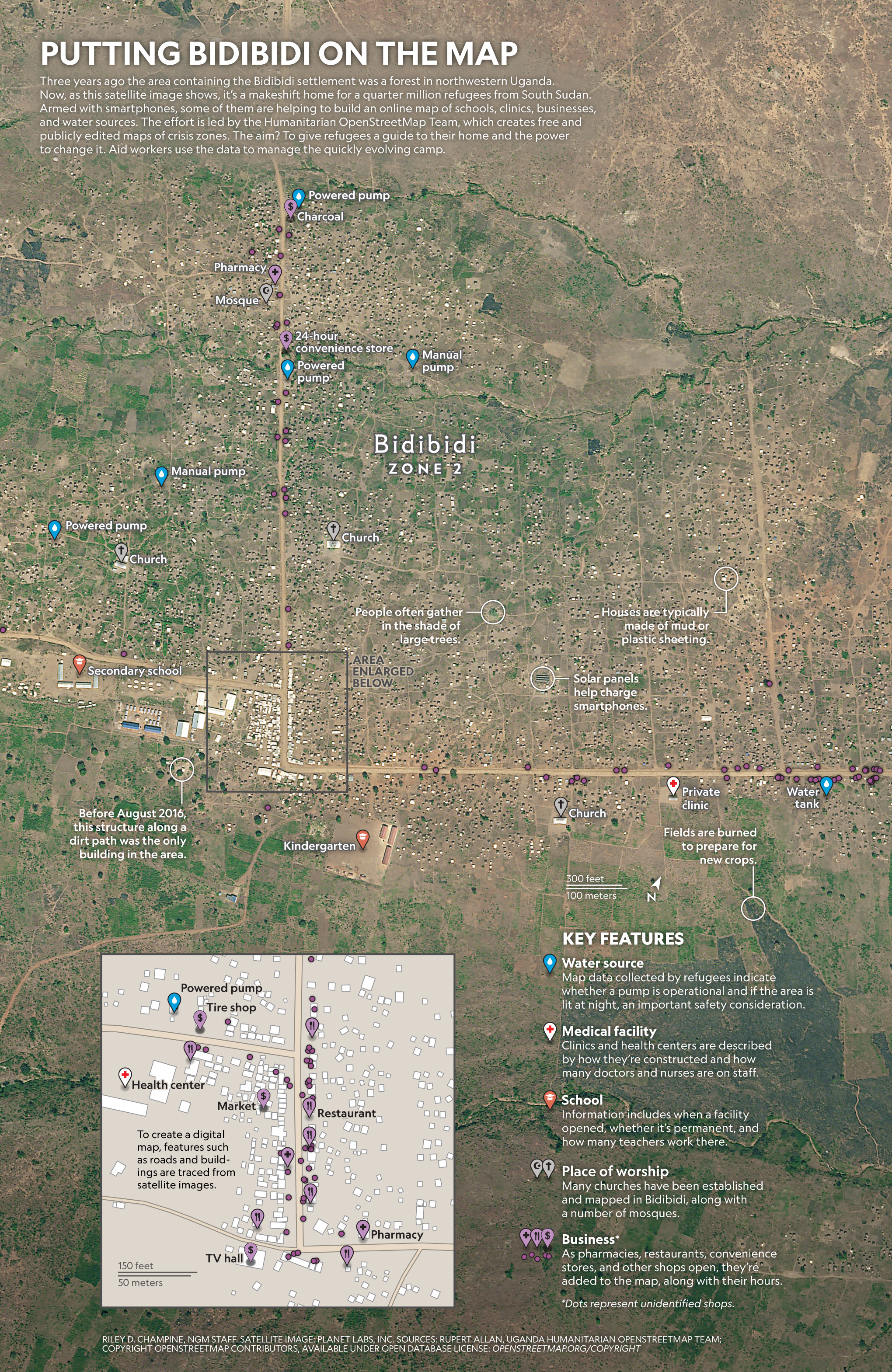 Three years ago the area containing the

Bidibidi settlement was a forest in northwest-

it’s a makeshift home for a quarter million

phones, some of them are helping to build an

water sources. The effort is led by the Human-

The aim? To give refugees a guide to their

home and the power to change it. Aid workers

use the data to manage the quickly

whether a pump is operational and if the

area is lit at night, an important

Clinics and health centers are described

by how they’re constructed and how

many doctors and nurses are on staff.

Information includes when a facility

opened, whether it’s permanent, and

how many teachers work there.

Many churches have been established

and mapped in Bidibidi, along with

a number of mosques.

stores, and other shops open, they’re

added to the map, along with their hours.

In camps around the world, refugees live crammed in tents, makeshift shelters, or metal dwellings. They’re restricted by laws that make work and movement outside the camps impossible. Even in well-planned camps such as Azraq in Jordan’s desert, the starkness of life without jobs or a sense of belonging sends refugees back to Syria or forces them to try to earn money in dangerous, under-the-table arrangements.

In Uganda, under one of the world’s most progressive policies, those who’ve fled civil war in South Sudan can live, farm, and work freely. Here, Bidibidi’s future is discussed at the highest levels of government and the international community. The goal: To build a livable city out of a refugee camp, one that might endure even if the refugees can return home someday.

Consider that Venice was founded in the fifth century by refugees fleeing war on the mainland, and Palestinian camps founded 50 years ago are indistinguishable from other neighborhoods in the Middle East, and it seems feasible that a refugee crisis could birth a permanent—perhaps even a beautiful—city. Most camps worldwide are still built as temporary way stations. Speed and survival take priority, and aid groups, host countries, and refugees themselves hope they’ll return home soon. The reality is different: Refugees stay in exile for an average of 10 years. As the world grapples with record-breaking displacement, maintaining temporary camps is costing hundreds of millions of dollars a year and suspending the lives of millions of people.

In December 2013, two years after South Sudan gained independence from Sudan, conflict between rival government leaders erupted into civil war. A peace deal paused the fighting, but in July 2016 the agreement crumbled. As indiscriminate killing swept the country, tens of thousands of people escaped to Uganda. Bidibidi opened that August, and almost immediately 6,000 people a day began arriving.

A month later, all 193 United Nations member states pledged to integrate refugees more fully into their societies. Thirteen countries, including Uganda, are piloting this strategy. But it’s hardly revolutionary in Uganda, where refugees have been allowed to live and work for a decade. In 2017, Uganda launched an effort to encourage development in refugee-hosting areas.

Uganda has transformed the majority of Bidibidi’s schools and clinics into permanent structures and installed a water system. Unlike many refugee camps, which are isolated and gated, Bidibidi merges almost seamlessly into its surroundings. The refugees’ homes, surrounded by corn, peanuts, and sesame plants, are nearly identical to those in the Ugandan villages between the camp’s five zones. When—or if—the South Sudanese go home, Ugandans will use the new schools, health clinics, and piped water.

“We may not have serious infrastructure like other cities, but I believe that those who saw New York within two years of its formation wouldn’t say it was much better than Bidibidi,” says Robert Baryamwesiga, the Ugandan official who established the camp and continues to oversee it. “If we are given that time, we can also make a very big city.”

It's Wednesday at 4 p.m., and a meeting at the Ministry of Useless Affairs is called to order. Henry Anguyo, in a neat plaid button-down, presides from a plastic chair next to a shack on the side of a long dirt road. Two dozen members sit in chairs and on the ground.

A city is forming around them, and like residents everywhere, they want to have their say. The ministry is a kind of civic club started by frustrated refugees seeking to improve conditions. Many inhabitants feel ignored by the camp bureaucracy and can’t afford even basic supplies such as soap and shoes. The ministry has sought to tackle issues like unemployment, broken water taps, and pregnant women being hassled during monthly food-ration distributions. Someday the group hopes to have done enough to change the ministry’s name to “Useful.”

Anguyo was a teacher in South Sudan, and his patience comes in handy as the complaints pile up. He listens for a while with a serene smile before interjecting: “Now, what are solutions?”

Early on, aid workers saw long-term potential in Bidibidi. Miji Park, who was setting up programs for Mercy Corps, was impressed by how quickly a market popped up near the reception area. “From the very beginning you could see the future,” she recalls. “It was clear there’d be huge economic growth.”

But in Bidibidi, a medical technician can find himself hawking papaya and passion fruit, while a nurse makes a living selling shards of plastic bottles covered with fabric scraps as earrings. Bidibibi’s inhabitants live in subsistence limbo. If the economy doesn’t get a jump start, they’ll return to South Sudan or leave the camp for another city in search of work.

Long-term stability means shifting the refugee-camp paradigm from humanitarian aid toward private industry. A California-based think tank called Refugee Cities is lobbying refugee-hosting governments to build development zones that could draw foreign investment. “If you create the legal space in which economic activity is allowed and people are given basic legal stability, you can unleash tremendous dynamism that ultimately creates prosperity,” founder Michael Castle Miller says. “Not just for people there—but throughout the country.”

Blueprints and budgets drafted by various humanitarian organizations show how economic development might come to Bidibidi: Wi-Fi zones, mini-electrical grids, large-scale production facilities. For now, business is small-scale, and private companies are only starting to think about how to tap Bidibidi’s idle labor force.

In a tarp-covered workshop, two refugees pound a pulpy biomass mixture into small cakes and lay them out to dry in a greenhouse next door. Every morning jumpsuit-clad workers carry a stack of cakes, 25 cents each, to nearby houses. In small kitchen huts, customers light a special stove and insert the briquette—an eco-friendly solution to the demand for wood to fuel cookstoves. For the rest of the day a large pot of beans or rice simmers on top.

Pamela Komuhendo, a red beanie pulled over her braids, describes the challenges facing Raising Gabdho, the briquette company she cofounded three years ago in Kampala. It grew so quickly that new customers are now accepted only by referral. Bidibidi presents a new hurdle: There’s little infrastructure to support new business. Despite this, Raising Gabdho has decided to build a plant and an 11-kilowatt solar mini-grid that could help launch 40 to 50 new businesses.

“There are people planning to settle here,” Komuhendo says. “Even if there’s peace in South Sudan, they’ll stay here if they’re making money.”

On a busy market street where people come for a haircut, a warm beer, or to catch a soccer match, Patrick Aleko irons church logos and team names onto T-shirts in his solar-powered graphic design shop. He ran a similar business in South Sudan. The pink and blue structure is the sturdiest on the block, and inside he teaches kids design on two computers. When he put up his concrete building, the neighbors chided him: You’re wasting money—next year we’ll be back in South Sudan. Now they’re tearing down their tarps and buying bricks.

As the sky darkens, Aleko moves outside and perches on a wooden stool. “I’ll be the last person here,” he says, a security light casting a glare over the emptying market. “I’ll close my doors and say goodbye to Bidibidi when it’s just dogs in the street—when there are no more customers.”

What, he wonders, will happen to the camp if South Sudan achieves peace? Will the Ugandan government be able to maintain what’s been built, or will millions of dollars of infrastructure rot in the forest? He knows what he thinks the answer should be. “Bidibidi will become a role model,” he exclaims. “Let it become a permanent settlement.”