These charts show how coronavirus has ‘quieted’ the world

People make a lot of noise. Cars rumbling along streets, planes roaring overhead, feet slapping the sidewalk—these and other actions create countless tiny vibrations in the ground. A global network of seismometers registers those oscillations 24/7. But since world leaders have urged citizens to stay home and maintain social distancing to slow the coronavirus pandemic, the hum of daily life has quieted. 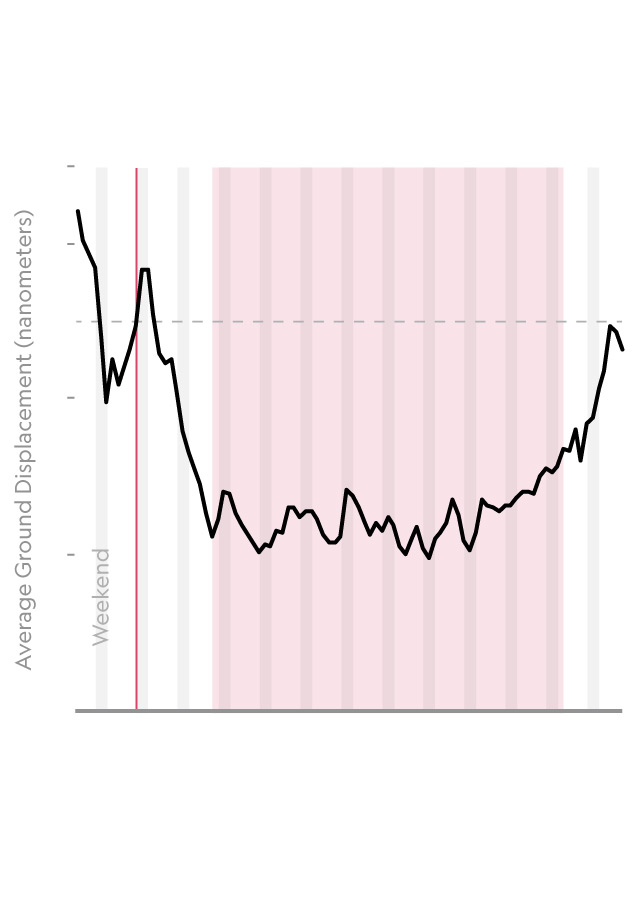 Enshi began gradually returning to activity after some restrictions were lifted mid-March. 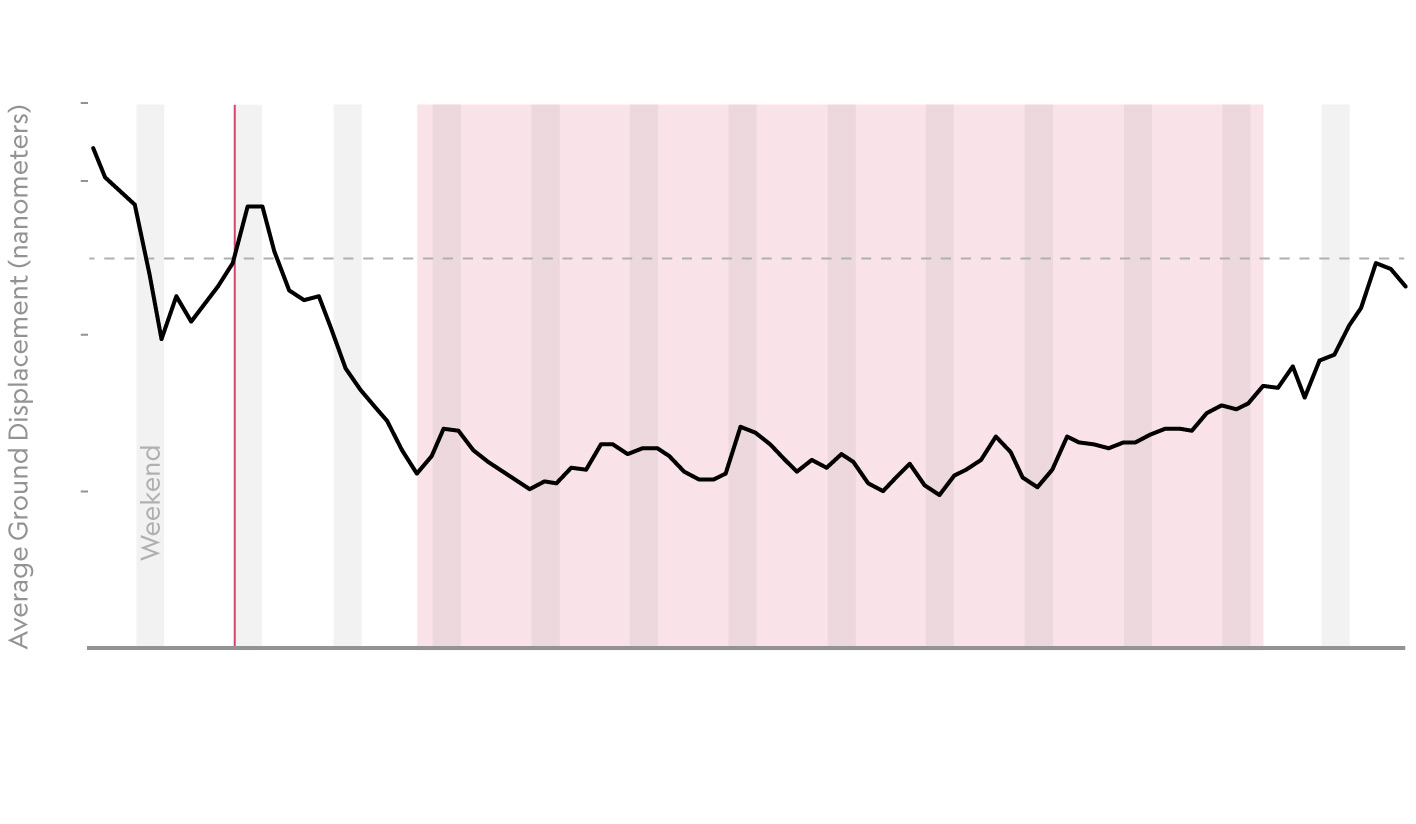 Enshi began gradually returning to activity after some restrictions were lifted mid-March.

Lulls in seismic activity have occurred in the past, generally in short spurts. But COVID-19—the disease caused by the novel coronavirus—has imposed a lengthy hush in populated regions across the planet. And seismometers on multiple continents are recording the shift.

“As seismologists, we see you,” says Thomas Lecocq, a geologist at the Royal Observatory of Belgium.

An added benefit of the reduction in background noise: It might allow scientists to more closely study phenomena sometimes lost in the daily hubbub of human life. 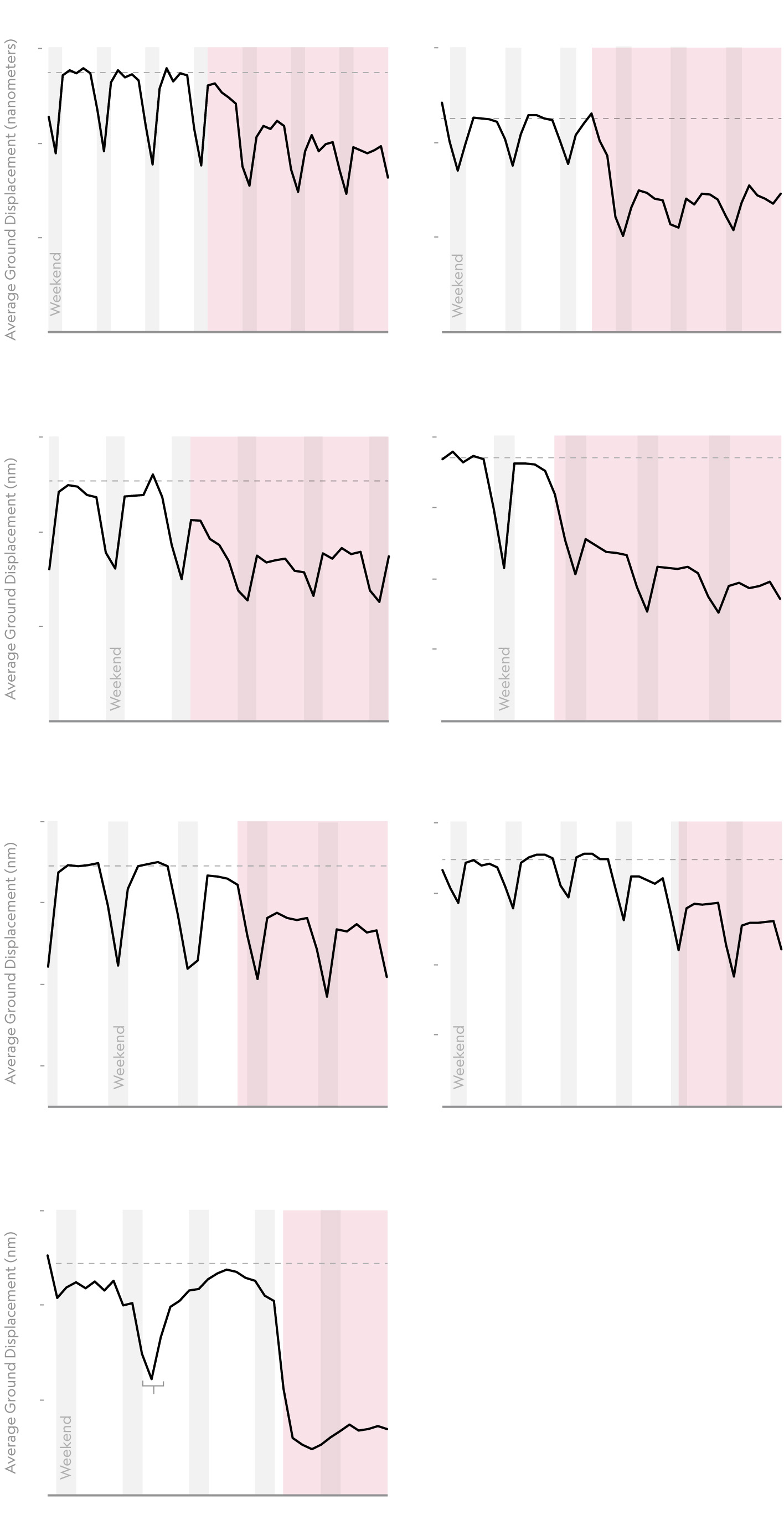 The sound of silence, around the globe

Lecocq initially analyzed data from stations in his home city of Brussels just to show his family and friends the seismic impacts of staying home. He posted the data on Twitter alongside others who noticed similar patterns. The charts sparked the interest of scientists around the world who began tracking noise reductions in numerous places, including cities of Switzerland, Spain, Italy, the United Kingdom, China, Nepal, the United States, New Zealand, and more.

“We keep it looooooow!!” a cheery Lecocq wrote on Twitter this week as the reduction in noise persisted in Brussels. He says the phenomenon may be unprecedented: “I think it’s the first time that such a thing happened at a global scale.”

Though scientists have noted a definite drop in human activity, it’s tough to draw conclusions about how well social distancing is working from seismic data alone, Lecocq says. The magnitude of the change depends on many factors, including population density and nearby industrial activity. Even the position of a seismometer within a city can influence the size of the lull. In Brussels, seismic activity since the advent of COVID-19 is about 30 to 50 percent lower than average—similar to declines during the Christmas holidays. In Nepal, the seismic plots of some cities show a stunning 80 percent drop.

Observations that began out of curiosity might prove valuable to seismology research in other ways. “Having a lower level of background noise is just like being in a quieter room,” says environmental seismologist Celeste Labedz, a PhD student at the California Institute of Technology. “We can hear more sounds.”

The heightened stillness during self-quarantine could allow seismologists to detect faint or distant earthquakes they previously could have missed. The quiet might also help scientists study the natural buzzes of our planet, such as the rush of river waters, that fall into a similar frequency band as human activity, Labedz says.

One team of scientists is examining the noise reduction itself, by studying seismic noise recorded on a fiber optic network underneath Palo Alto, California. Unlike the single point of measurement from a seismometer, a fiber optic network can measure noise in hundreds of locations, says seismologist Nate Lindsey of Stanford University, who is analyzing these changes.

One early conclusion of the analysis: Lindsey and colleagues found that even when freeway traffic abated, noise persisted near a local hospital. The fiber optic network data is so precise that researchers can spot individual cars passing by. Studying traffic at such a fine scale could help officials manage the movement of people in future crises, says Stanford seismologist Siyuan Yuan, who is collaborating with Lindsey.

On April 1, Lecocq put out a call to researchers to help assemble the masses of seismic data into a paper. Within just two days, he recruited 26 volunteers. The study will not address the efficiency of social distancing, but will give other scientists easy access to analyze the unprecedented global quieting.

For seismologists, the work serves as a welcome distraction from the uncertainty of the pandemic. “We all have something pretty big on our minds at the moment, so it’s nice that there’s something going on that’s in our expertise that we can do right now,” Labedz says. “It makes us feel busy in a positive and helpful way.”