Why Hurricane Sally is moving so slowly—and delivering epic rainfall

Early Wednesday morning, Hurricane Sally struck the Gulf Coast from Mississippi to the Florida Panhandle as a Category 2 storm. It’s expected to dump a devastating 20 inches of rain as it continues moving over land more slowly than the average person walks—about 3 miles per hour.

Last month, Hurricane Laura struck southwest Louisiana and Texas, trotting onshore at 15 mph as a Category 4 storm that rapidly lost steam once over land. (See photos from a Louisiana town struggling to rebuild after Laura.)

Twice in the past three days, Sally built wind speeds in just a few hours—the storm “rapidly intensified”; on Monday and then again late Tuesday into Wednesday morning. Laura also rapidly intensified—from a tropical storm to a Category 3 hurricane in 24 hours—but it moved quickly. 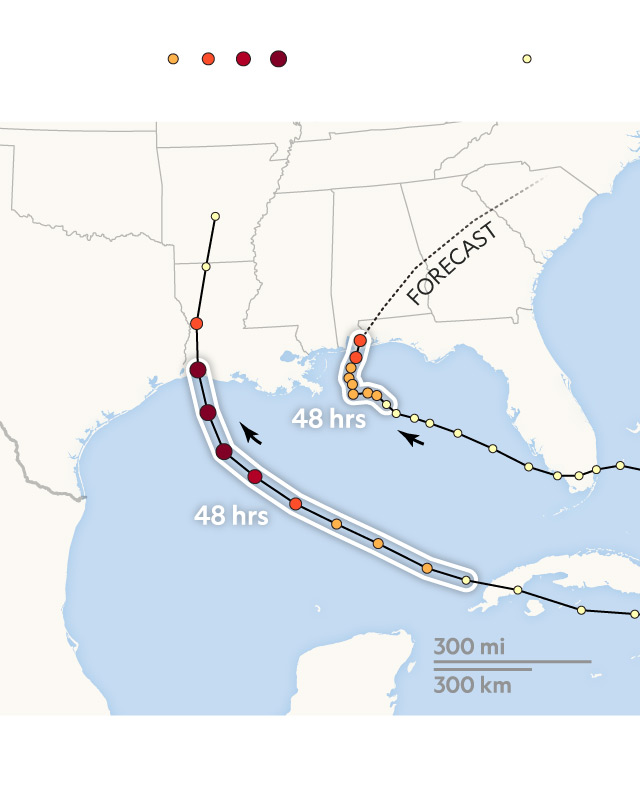 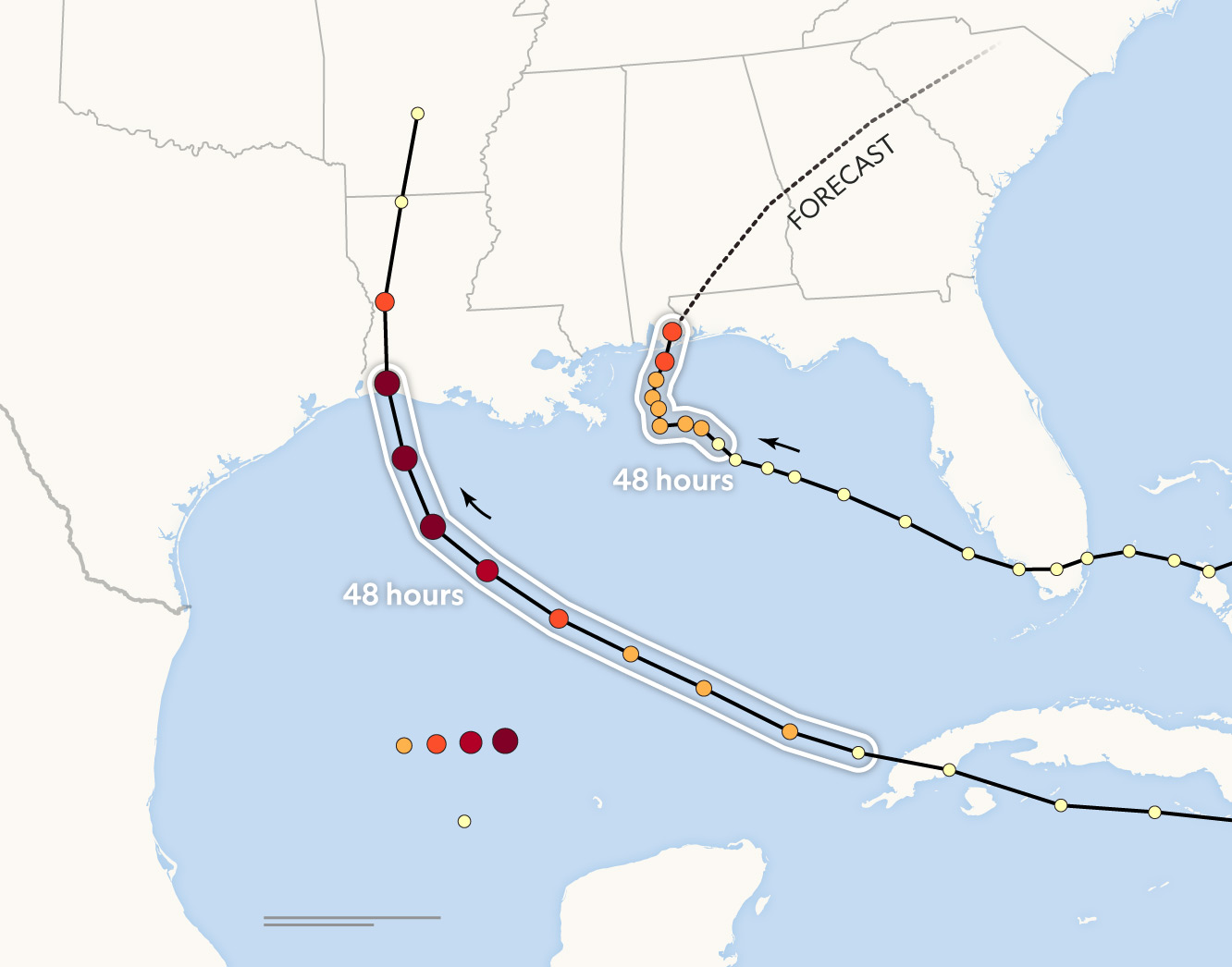 These storms developed completely differently, but why? Why do some hurricanes barrel into the coast with devastating speed, while others park over an area and cause major flooding? And could climate change be influencing them?

What makes some hurricanes so slow and rainy?

In different parts of the atmosphere, explains University of Miami meteorologist Brian McNoldy, there are steering currents of wind that determine where storms go and how quickly they get there. A steering current could be driven by anything from systems of high or low pressure in the atmosphere to fast moving currents of air called jet streams. Depending on the winds near a hurricane, it could get trapped in a weak current or a strong one.

“Hurricanes effectively move like pebbles in a stream,” says Colorado State University atmospheric scientist Philip Klotzbach “So, if you can forecast the stream you can know where the pebble is going to go.”

How much rain a hurricane might dump in a given area depends on how quickly it moves, says McNoldy. Whether it’s caught in a draft pushing it 5 mph or 20 mph really “comes down to luck,” he says.

Were Hurricane Sally driven by stronger steering winds, it would be moving more quickly, he says, and rainfall would not be as much of a concern.

For comparison, Hurricane Paulette also recently intensified into a Category 2 storm in the northern Atlantic Ocean and was moving at 35 mph before it dissipated. “Paulette [was] being steered by very strong winds,” says McNoldy. “The only difference is where [the storms] are in the atmosphere.”

Emerging research is showing that the climate crisis will make storms move more slowly and higher temperatures will allow them to carry more water. One paper published in 2018 showed that hurricanes around the world were already moving about 10 percent slower on average than they did before 1950. Warmer temperatures also make hurricanes rainier. Warm air is able to hold more water vapor, and historic rainfall like Hurricane Harvey produced in Houston, Texas, has been linked to climate change.

“When it comes to climate change, the more straightforward relationship is that a warmer atmosphere holds more water vapor. Just look at heavy rainfalls generally,” says Klotzbach of increased precipitation in some regions.

The exact reason storms are moving more slowly is still an area of scientific debate, but the prevailing theory is that, as the poles warm, the temperature difference between the poles and the tropics decreases and weakens the jet stream. Wind is generally created by temperature differences in a given location, and jet streams may be slowing down as poles warm. More evidence is needed to prove this is the case, says Klotzbach.

Why do some storms gain strength so quickly?

“Typically, most hurricanes undergo rapid intensification at some point in their lifetime,” notes Klotzbach.

Hurricane Wilma, which hit Florida in 2005, is the most extreme example of intensification. Its winds went from 75 mph to 185 mph in a single day.

For a hurricane to intensify, there are generally three factors forecasters look for: ocean temperature, humidity, and wind shear—the altitude-shifting winds that disrupt the symmetrical shape hurricanes need to survive and grow.

Forecasters thought Hurricane Marco, which spun up in late August, might intensify, but it was ultimately torn apart by wind shear.

Hurricanes move like engines over water, in what McNoldy describes as an “in, up, and out” circulation. Winds push water toward the center of a storm, low pressure over the eye sucks it up, and remaining air flows out over the top.

Ocean water in the Caribbean and Gulf of Mexico is consistently warm and often where hurricanes intensify.

But, McNoldy says, “Even when all the ingredients are present, some storms don’t rapidly intensify.” He adds that more well-organized storms tend to suddenly gain strength, while the “big, messy storms” are more likely to fall apart.

As with a hurricane’s speed and potential for rainfall, climate change may also be favoring rapid intensification.

Rapid intensification is happening more quickly and packing a bigger punch, says Klotzbach. “Part of that is we can observe storms so much better than we did in the past. But even controlling for that, it does appear we are getting more rapidly intensifying storms.”

Luck of the climate, or just bad luck?

Portions of Mississippi, Alabama, and Florida currently are under a flash flood emergency, and nearly half a million are already without power.

This hurricane season is as busy as forecasters predicted in May it would be. There are two hurricanes and a tropical storm still moving west across the Atlantic behind Sally. Will they, like Sally, dump enormous amounts of rain? Or will they, like Laura, dump much less rain, but blaze destructively across the Gulf Coast?

Natural climate variations like this year’s La Niña weather event and perhaps climate change too might determine that. Of the impacts on hurricanes scientists have predicted our greenhouse emissions will have—more rainfall, slower storms, higher intensity—Sally checks all the boxes, but Klotzbach and McNoldy caution against using one single weather event as an example for the climate crisis.