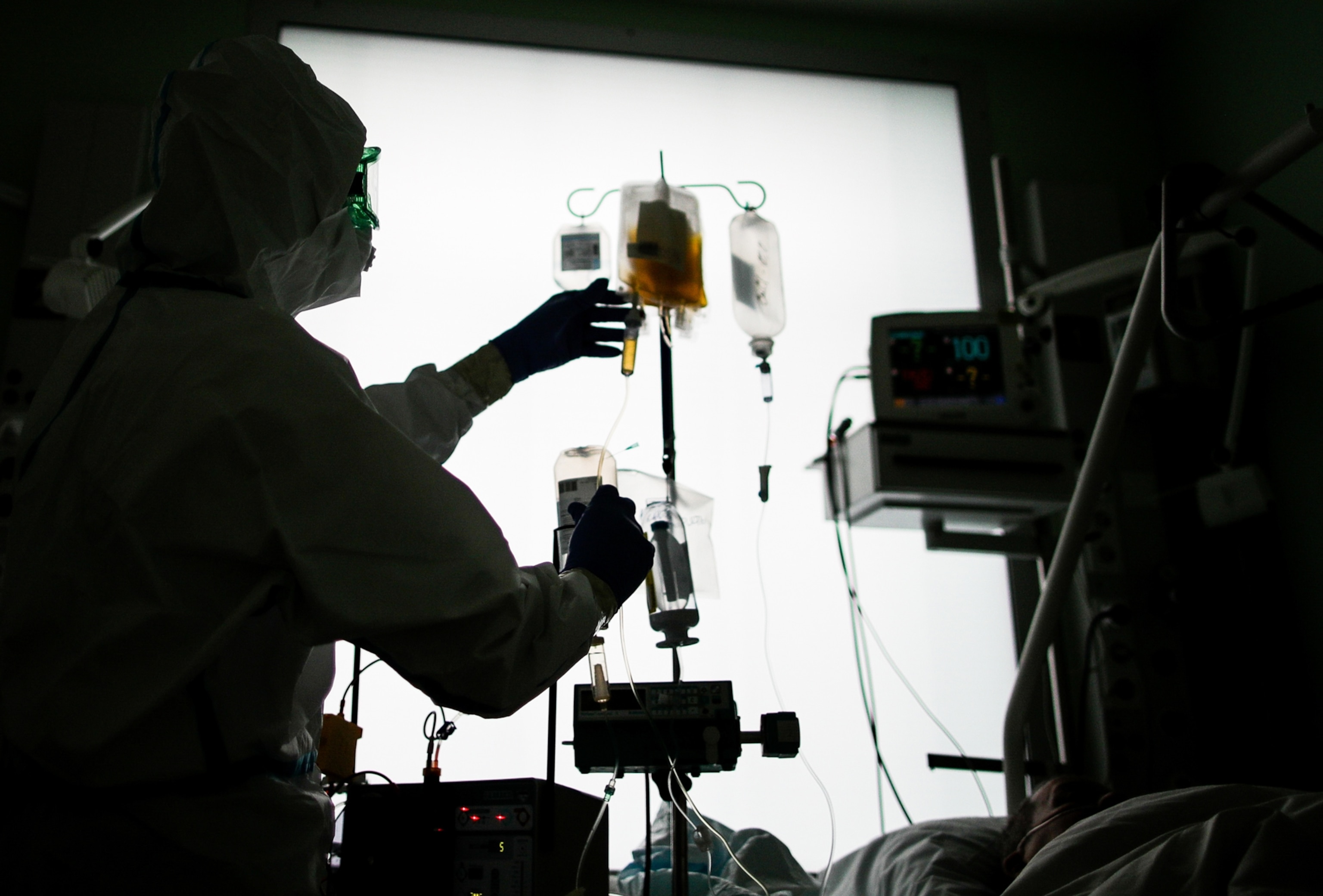 Blood plasma touted as COVID-19 breakthrough. But does it work?

The U.S. has granted emergency authorization for convalescent plasma. The science around the treatment isn’t settled.

Convalescent plasma has been used for more than a century to fight infectious diseases, but is it ready to battle COVID-19?

Hopes ran high earlier this year that transferring the liquid part of blood from recovered COVID-19 patients to people with the disease could be a remedy for the worst cases of the pandemic virus. Doctors have relied on this old-school treatment—known as convalescent plasma—to fight outbreaks since before the 1918 flu pandemic. Given this blood plasma comes packed with antibodies, which tag germ invaders like the coronavirus for destruction, this therapy has long served as a simple way to share immunity.

But months after this effort began, the data on convalescent plasma hasn’t yet confirmed its effectiveness for treating COVID-19, despite more than 70 clinical studies happening worldwide. Now, one of those investigations finds itself in the middle of an academic and political firestorm.

On August 23—a day after accusing the U.S. Food and Drug Administration of slow-walking therapies and vaccines for the coronavirus—President Donald Trump announced the FDA’s emergency authorization of convalescent plasma to treat COVID-19. The Trump Administration’s latest move in the race to approve pandemic therapies was based largely on positive preliminary results released earlier this month by the Mayo Clinic, a world-renowned medical center headquartered in Rochester, Minnesota. The study, which has not yet been peer-reviewed, reported that giving plasma within three days of hospitalization lowered the patient death rate by 3.2 percent.

But even though this study has received millions of federal dollars and involved tens of thousands of U.S. patients, it has one glaring flaw. The study lacks a control group—people who didn’t receive plasma—to serve as a point of comparison. This pitfall makes the Mayo Clinic’s findings harder to interpret, and it is part of a broader trend of shortcomings in early studies of convalescent plasma.

“I'm hopeful that institutions and individuals will recognize that the issue is far from settled,” says Daniel Culver, a pulmonologist with the Cleveland Clinic in Ohio. While he says research into convalescent plasma is still showing promise overall, he and others are concerned that the FDA’s authorization will be seen as a fuller endorsement, causing more patients and physicians to request a still unproven treatment.

The Mayo Clinic project grew from a grassroots effort by doctors from across the country, who envisioned two ways to immediately deploy convalescent plasma. One was well-vetted clinical trials, and for the other, the team envisioned a network of “compassionate use” or “expanded access” programs that would provide plasma to people with life-threatening COVID-19 symptoms, outside of traditional FDA approvals.

One concept, however, ended up dwarfing the other. While expanded-access programs took off far beyond its proponents’ expectations, a lack of dedicated funding and infrastructure slowed down efforts to launch clinical trials.

As WIRED reported on August 21, expanded-access programs in the U.S. grew rapidly to more than 2,700 hospitals, some of which had little of the setup or know-how to run clinical trials. The Mayo Clinic’s program alone has received $48 million from the U.S. Department of Health and Human Services to use convalescent plasma in hospitalized patients.

“Its popularity gave the impression that it was the golden liquid that gave a cure, and that was inaccurate,” says Mila Ortigoza, an infectious diseases specialist at NYU Langone Health. “The truth is, there’s signals out there—every non-randomized study right now shows a positive sign for plasma—but we don’t have the confidence to say that it works.”

The gold standard of medical evidence is a large trial in which subjects with a disease randomly receive either a real therapy or a placebo as part of a control group. But so far, researchers around the world have run either small trials or observational studies, such as the one at the Mayo Clinic, that forgo the use of a placebo. Without a control group, it’s hard to glean whether people would have gotten better on their own or had the same results without receiving convalescent plasma.

Frankly, you have no idea at the end of it whether the tens of thousands of people who got convalescent plasma were helped, harmed, or it made no difference. You just can’t tell.
ByMartin LandrayUniversity of Oxford

“Frankly, you have no idea at the end of it whether the tens of thousands of people who got convalescent plasma were helped, harmed, or it made no difference. You just can’t tell,” says Oxford cardiology professor Martin Landray, the co-lead of the U.K.’s RECOVERY COVID-19 trials.

On July 30, a group led by the Mayo Clinic’s Michael Joyner uploaded a review article to medRxiv that argues that when the small-scale studies’ findings are combined, they suggest a benefit to using convalescent plasma with COVID-19 patients. In a 17-page memo, the FDA rationalized its actions by citing the same trials and studies, as well as the broader Mayo Clinic expanded-use results. Pirofski, a co-author on the review article, says that the authorization is justified on the merits, despite the visible pressure on the FDA.

“I believe in science, I believe in data, [and] I have every reason to believe that this decision hinged on that,” she says. “There’s been a confluence of events that has been really unfortunate.”

What the FDA decision means for you

The FDA’s emergency authorization isn’t the same thing as “FDA approval,” a stringent threshold no COVID-19 therapeutic has met so far in the U.S. The FDA said in a statement that “COVID-19 convalescent plasma does not yet represent a new standard of care based on the current available evidence,” but rather that “it is reasonable to conclude that the known and potential benefits of [convalescent plasma] outweigh the known and potential risks.”

Even so, the Trump Administration’s support of convalescent plasma—and earlier championing of the now-debunked hydroxychloroquine—has raised questions among scientists about whether the president will pressure the FDA to speed up approvals ahead of the 2020 U.S. presidential election. On August 23, the Financial Times reported that Trump Administration officials were considering fast-tracking a COVID-19 vaccine for this fall, well before large-scale clinical trials are expected to be finished. On August 20, Reuters reported that a top FDA official had vowed to resign if the agency prematurely approved an unproven vaccine. And the federal government has already committed $8 million to digital and radio advertisements asking Americans to donate plasma, despite its lack of approval.

For now, University of Arizona researcher and ICU medical director Christian Bime isn’t concerned about political pressure—out of confidence in the scientists embedded in the process.

I trust scientists to do the right thing.
ByChristian BimeUniversity of Arizona

“I trust scientists to do the right thing,” Bime said in an email to National Geographic. “The stakes are too high and the consequences too dire for scientists to not follow best practice.”

The confusion around convalescent plasma highlights one of the many stumbling blocks in the U.S.’s response to COVID-19: the lack of a coordinated, national clinical trial process.

Pirofski is currently leading a randomized, controlled trial of convalescent plasma that’s recruited 190 patients so far. When the trial began in New York City on April 17, it didn’t have any federal funding. Although she, Ortigoza, and their colleagues raced to recruit patients, cases in New York City ebbed within weeks of the trial starting, slowing its progress to a crawl. Only now, months later, has funding come through from the U.S. National Institutes of Health to expand the trial to Connecticut, Florida, and Texas. “We’ve been playing kind of catch-up ball,” she says.

“There are theoretical and actual risks from infusions of human plasma, and possibly additional risks from low titer plasma [plasma with low levels of antibodies] that have not been adequately evaluated,” Culver says. “That [risk] can only be evaluated through randomized controlled trials.”