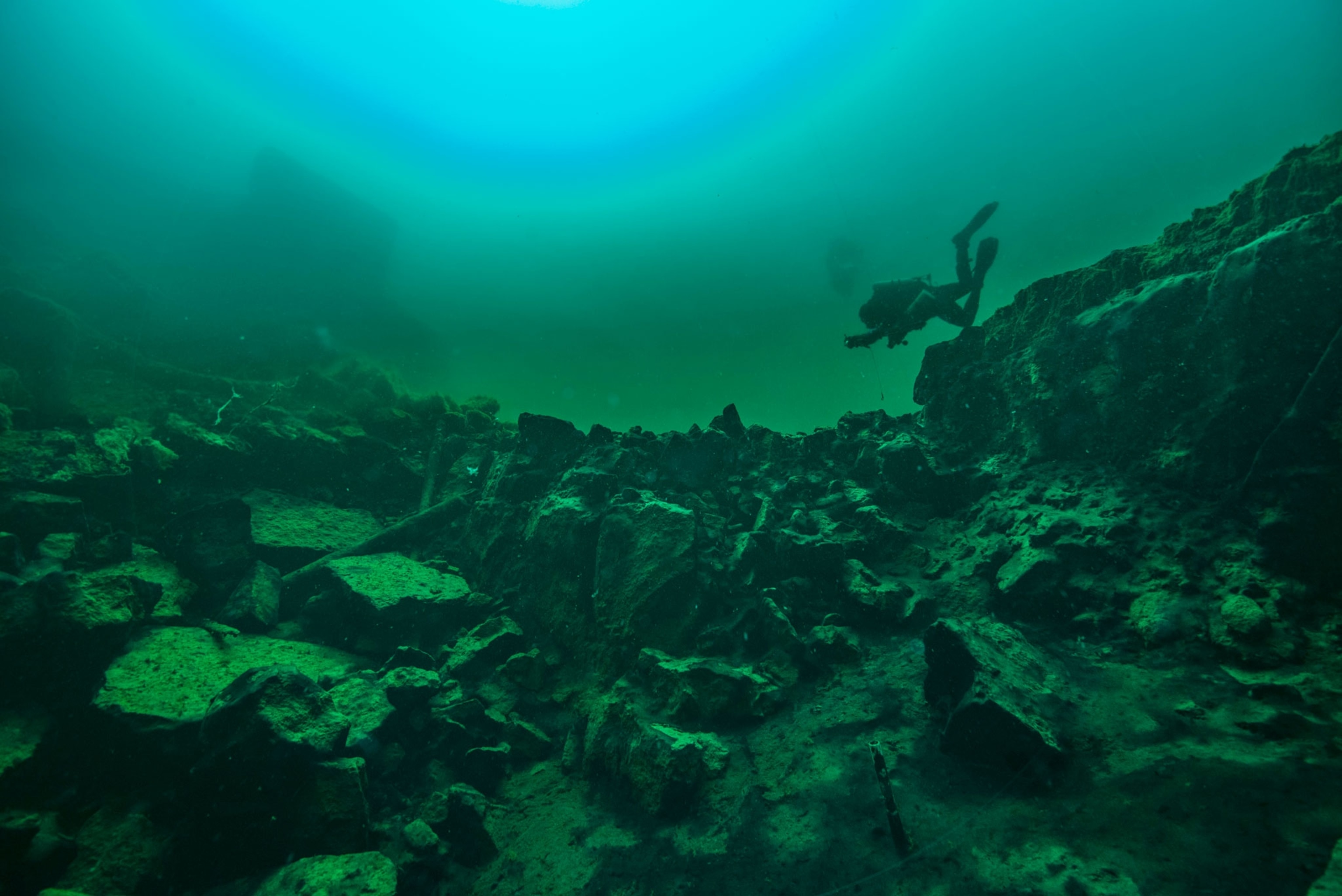 As the moon's tug on the ocean slowed the rotation of our planet, longer days may have helped photosynthetic microbes breathe new life into the world.

A diver explores the Middle Island Sinkhole, a part of Lake Huron that holds microbial mats thought to be similar to the ones that lives in Earth’s oceans around 2 billion years ago. Experiments with cyanobacteria in these mats suggest that changes in the length of Earth’s day would have allowed the photosynthetic microbes to enrich the atmosphere with oxygen.
Photograph by NOAA, Thunder Bay National Marine Sanctuary

Judith Klatt had been studying microbes called cyanobacteria for years, and she was initially skeptical when some colleagues came to her with an idea: Could the length of a day on early Earth have mattered to the rise of life as we know it?

Day length has increased dramatically over Earth’s history. More than three billion years ago, entire days may have been just six hours long. And around 2.4 to 2.2 billion years ago, geological records indicate that the amount of oxygen in the atmosphere shot up while the volume of carbon dioxide shrank. That rapid increase in oxygen is generally credited to the proliferation of marine cyanobacteria, some of which absorb energy from sunlight and produce oxygen.

Changes in day length and the rise of atmospheric oxygen have each been explored scientifically for decades, but no one thought to consider them together—until now.

Klatt, a microbiologist at the Max Planck Institute for Marine Microbiology in Germany, and her collaborators at the University of Michigan set out to investigate whether longer days could have let ancient cyanobacteria thrive, setting the stage for an explosion of early animals and, ultimately, the life-forms that exist today.

To investigate that pattern, the team turned to a unique ecosystem on the bottom of Lake Huron called Middle Island Sinkhole. They paired oxygen concentration measurements in the cyanobacteria-rich sinkhole and experiments in the lab with computer models of Earth’s rotation.

“It’s been a huge source of inspiration, going out there and seeing this world that, like, all of Earth might have looked like,” Klatt says of the sinkhole. “It’s really mind-boggling.”

The results don’t entirely solve the mystery. But as the team reports in the journal Nature Geosciences, the data do open up exciting possibilities for how day length and biology could have co-evolved on Earth—and beyond.

“What they’ve shown is that biology cares whether the day-night cycle is 24 hours or 12 hours,” says Christopher Spalding, a planetary scientist at Princeton who was not involved in the research. “So I think that first-order finding is worth looking more at.”

Locked in a lunar dance

Our current roughly 24-hour day is the result of Earth’s spin slowing down over its 4.5 billion years, and much of that change can be linked to the tides.

If you’ve spent a day near the ocean, you’ve probably watched the tides rise and fall along the shore. That seemingly gentle motion is due to a massive give-and-take of energy between Earth, its ocean, and the moon. As it orbits Earth, the moon gravitationally pulls on the ocean, and the water pulls back. The ocean responds to this tugging in the form of tides, and that introduces friction between the water and the rocky seabed beneath it.

That friction saps Earth’s rotational energy, slowing its spin and lengthening the day. This process happens very, very slowly over hundreds of millions of years, so changing day length is not something we can readily observe, and it’s been tough to track in the deep geologic record.

“We are pretty certain of the spin rate of the Earth back to about 550 million years … because we have seashells with growth bands, and from their growth bands, we can tell how long a day was,” says Spalding. “But problems come earlier [than that] because we don’t have corals or seashells.” (See fossil structures that may be the oldest sign of life on Earth.)

Deep in Earth’s history, then, “we’re in model land,” says Woodward Fischer, a planetary scientist at the California Institute of Technology who was not involved in the study. “We know the length of day has a systematic history, and we know what direction that [change] is, but we don’t know a lot of details.”

While many models for Earth’s rotation rate exist, one that has been used since the late 1980s proposes that days got progressively longer until about 2.5 billion years ago, when day length stabilized at around 21 hours and remained relatively unchanged for millions of years.

Around that time, the tides, Earth, and the moon could have reached what modelers call resonance. There are really two rotational forces that affect Earth’s spin. The tides drag on the planet, slowing it down. But the sun also heats one side more during the day, causing the oceans and atmosphere to expand, which pulls Earth forward a tiny bit in its rotational path.

Tides were winning this tug-of-war until the system hit resonance, when those two opposing forces cancelled each other out. And once it reached that “magic” frequency, the spin rate would have been unlikely to budge for quite a while.

Klatt and her team used this model as the basis of their new work. Intriguingly, they found that the resonant 21-hour day set in around the same time that geologic records reflect a burst of oxygen in the atmosphere. “I loved seeing the similarity between the oxygen pattern and rotation rate,” says Klatt. “I was so excited.”

Cyanobacteria get their day in the sun

Cyanobacteria still thrive in Earth’s waters today, and the ones living in “mat” communities in Middle Island Sinkhole offered the team another piece of the puzzle.

The water in the 75-foot-deep sinkhole has high concentrations of sulfur and not much oxygen. Scientists think those conditions could be similar to the ancient ocean billions of years ago. By studying that environment, Klatt’s team can get an approximate idea for how similar ancient ecosystems could have behaved. (Find out how microbes living in Yellowstone’s thermal pools gave us a key ingredient in COVID-19 tests.)

Klatt found that these microbes are living on the edge, in a precarious balance of oxygen production and loss.

“Microbial mats are very close to zero-sum games. They make a lot of oxygen, but they also consume a lot of oxygen,” Fischer says. “They really only do work at the margins … with a little bit of oxygen leaking out. That’s what this paper is recognizing.” The question, then, is what does it take for oxygen made by cyanobacteria to leave the microbial mats and enrich the atmosphere?

The answer is a physical mechanism called diffusion, in which oxygen gas in spots of high concentration tends to move to areas with lower concentrations. It’s like when you open a bottle of soda and the bubbles of carbon dioxide rush out.

While short days have cyanobacteria constantly switching on and off, longer days let them photosynthesize for longer stretches of time, building up oxygen concentrations around them until some is driven out and up into the atmosphere. Indeed, Klatt’s laboratory experiments showed that when samples of the lakebed microbes were exposed to longer periods of daylight, they contributed more oxygen to the atmosphere.

The spin-rate model Klatt used predicts that days lengthened steadily between 3.5 and 2.25 billion years ago. Once Earth, the moon, and the tides reached the resonance state at 21-hour days, they stabilized there until around 550 million years ago, when Earth’s spin began to slow down again. Settling into that long, stable day length would have been key for letting cyanobacteria hit their stride, optimizing their biological processes for a 21-hour day rather than continually adjusting to changing day length.

The results point to a fresh avenue for future research into various conditions on early Earth and beyond.

“The day length effect may be a linchpin in how to resolve this persistent mystery of Earth’s oxygenation,” says Arjun Chennu, a computational biology modeler at the Max Planck Institute who co-authored the study with Klatt.

“It might also be useful in thinking about how other global geochemical processes might be impacted by changing day length.” For instance, changes in day length and oxygen levels could have affected global carbon cycling and weathering on early continents.

And for Devon Cole, a geobiologist at the Georgia Institute of Technology, the work has potential implications for the evolution of life on other planets. Astrobiologists have previously considered spin rate on exoplanets as a factor in searching for life, but with Klatt’s work, they now have a clearer idea for how day length could impact alien biospheres and atmospheres.

Some of the thousands of planets found orbiting other stars are tidally locked, with one side experiencing continuous daylight and the other in perpetual night. “Could you even have a biosphere, one capable of reengineering the atmosphere, that we could actually detect on a planet like that?” Cole asks. “It’s possible the only really habitable spot would be the permanent ‘sunset’ circle on the edge.”

When it comes to considering these questions about oxygen and the rise of life, she adds, day length “is not necessarily an obvious thing that people would jump to, so I think it was a cool thing to look into.”