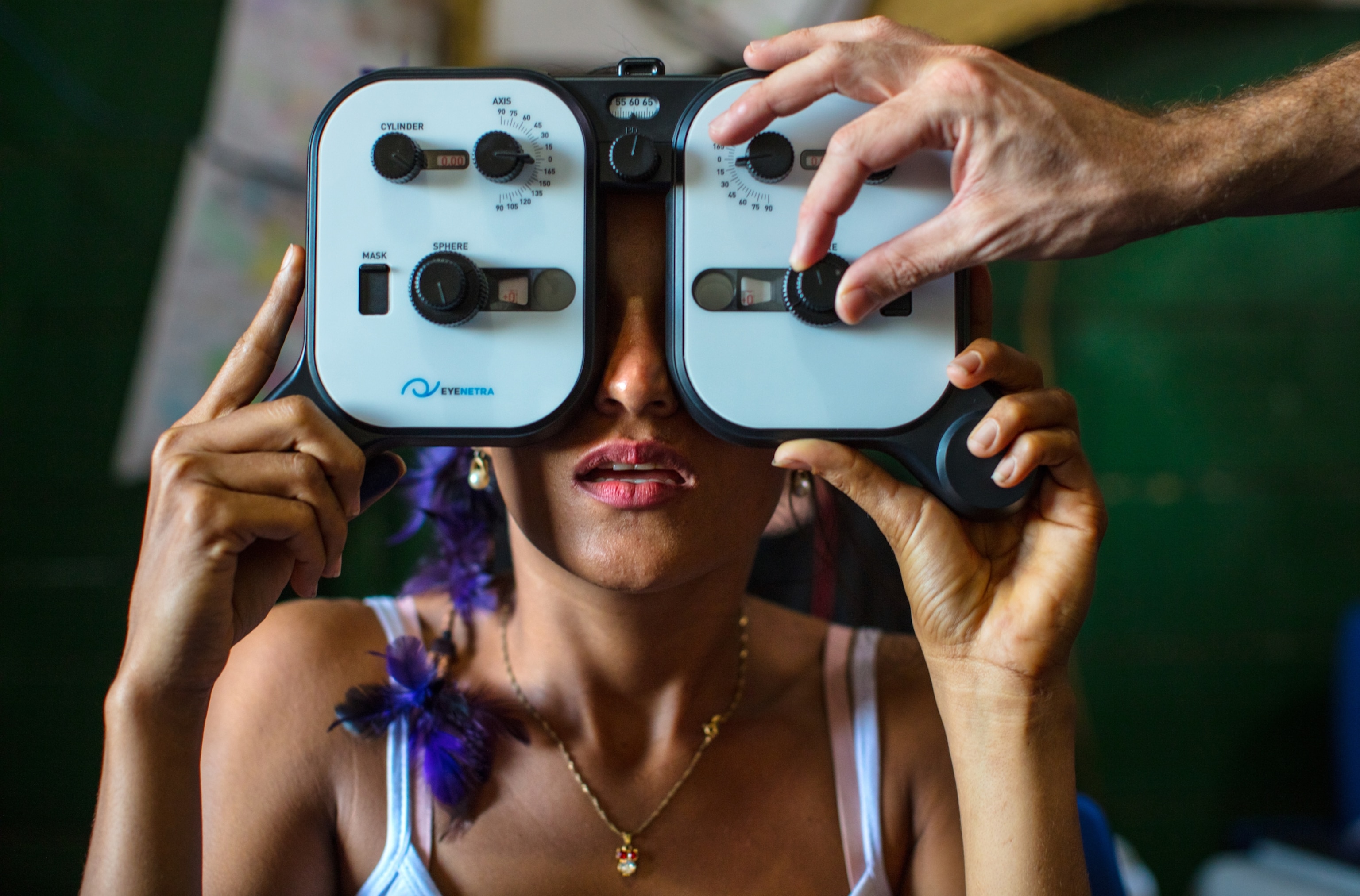 See how one organization is spearheading a solution to a massive global problem.

Taking their commitment to bring sight to the world, OneSight hosted their first-ever clinic in the Amazon to bring vision care to those in need.
Photograph by Stephanie Sinclair
This content is brought to you by our sponsor.

When National Geographic photographer Stephanie Sinclair traveled to the Amazon to visit a mobile eye care clinic, she uncovered the tip of a widespread problem.

Gerlane lives in a village in the Brazilian Amazon. She’s 14 years old and dreams of being a paralegal someday. But the road will not be easy. Her father is a farmer and the family has little money to spare for extras, so when Gerlane lost her only pair of glasses down a well she was in a panic. Her father tried to fish the glasses out—to no avail; he later wept recalling the effort. Gerlane now had trouble doing many things she loved, including reading to her sister at bedtime. Then her family heard about a mobile eye care clinic coming to a nearby village—an opportunity for a free eye exam and glasses—and made arrangements to travel there, an hour by boat.

Gerlane was one of more than 2,000 patients who traveled to a clinic run by OneSight, an independent nonprofit, during a five-day boat expedition to bring better vision to a remote and underserved area. What Stephanie saw and shot during that expedition was a tiny fraction of the population around the world that needs basic eye care. Currently more than a billion people worldwide need glasses, but have no way to get them. In other words, one out of seven people have a problem navigating through their daily lives, a problem with a solution many of us would consider simple. But for others, a pair of eyeglasses means money they don’t have and travel they cannot afford.

Lack of access to good vision care is no small issue. It creates a cascading series of problems for individuals, families, and communities. It starts in school, when students can’t see what’s going on and have trouble reading. That leads to limited employment prospects and often to social isolation. With one out of seven in need, many people who could become community leaders are being held back, disadvantaged from the get-go. Simply put, the human world is designed for the sighted, and too many people are denied their full potential because they cannot see clearly. Four years ago, for example, the entire country of Gambia had one eye doctor, for a population of two million. Rwanda, Zambia, Thailand, and many other countries have refugee and migrant communities that are not getting the eye care they need. And even in the United States a sizeable student population needs vision care it is not receiving.

OneSight’s Amazon expedition started with an 18-hour boat trip from Manaus to the community of Muritinga. The team totaled about 65 people, including 40 volunteers from all over the world. There were translators, cooks, boat crew, a team doctor, and 8 Brazilian ophthalmologists. The effort was an innovative approach to deliver the first fully digital eye clinic in a remote location.

“I’ve photographed a lot of NGOs doing work in communities around the world,” Stephanie reported, “and I have to say I was truly impressed with OneSight’s efficiency and organization in managing that many people. It was a pretty tight operation, and I think from a medical point of view in wanting to reach the highest number of people it was very successful.” She praised the team’s resourcefulness, enthusiasm, and dedication. “It seemed like a lot to manage in such a remote area. There was even one volunteer who had been recently diagnosed with cancer, and had decided to postpone her treatment to do this, in part to feel like she had a greater purpose.”

The clinic was organized months ahead, with OneSight partnering with two Amazon organizations, the Barco Hospital Methodist Church and the Penido Burnier Foundation. Those groups contacted local chiefs and told them what dates they would be there.

When Gerlane arrived at the school where the clinic was held she joined hundreds of others, some of whom had risen well before dawn and journeyed three or more hours. Among them was Maria Ferreira da Costa, a seamstress, who needed glasses to continue sewing; she was 101 years old. And there was a 71-year-old fisherman named Francisco Costa dos Santos, who had such bad cataracts he was down to 5 percent of normal vision. He got glasses and a referral to a helpful clinic in Manaus, where he lives.

People waited in line, registered, and then had their visual acuity checked. Then intraocular pressures were measured, eyes were dilated, and the patients looked into auto-refractors and other devices. The team carried portable slit-lamps and binocular indirect ophthalmoscopes for viewing the retina. Medications were distributed when appropriate.

The amazing thing was that patients went home that day with a pair of glasses. On one of the two expedition boats, the team had brought two tracers and four lens edgers, as well as thousands of stock lenses for a variety of prescriptions and conditions such as astigmatism. They were able to turn out 40 pairs of glasses an hour. Patients had a variety of frames to choose from, and the wait for their actual glasses was about an hour.

One of the patients kept people entertained all day with her funny stories and contagious laughter. Marta Sexes of the Apurina tribe, age 74, had cataracts that limited her sight to a few inches. One eye, she said, was blind from a snakebite. She’d had 5 husbands and 26 kids, and even with poor vision somehow managed to fish for her family twice a week and go on deer hunts. When she got her glasses, she pointed at everybody and everything, saying how beautiful the world looked. She even did a little dance.

“There were fishermen who work out in the sun all day,” Stephanie said, “and had no protection for their eyes. And they had some people who had very poor vision, like 20/200, and those cases were pushed to the front.”

After three days, the clinic traveled another four hours by river to the village of Cuia. Here, 48-year-old Amilde Ferreira Guimaraes took Stephanie out fishing. He started working at age 12 when his father died. He had a tumor in his eye four years ago, but it had not been checked since then. He had been waiting 8 years for government money. From the clinic, he received much appreciated sunglasses and readers.

Stephanie’s interest in the project was more than just professional. “Both of my children are visually impaired, so I have a personal understanding of the need for quality eyeglasses. I was thrilled to be a part of the project. I’ve learned firsthand how important eye care and eye health are in how one navigates through life. I’ve always had 20/20 vision, so I didn’t really understand until I had children. Documenting this project was very meaningful to me.”

The trip was such a success that OneSight plans to run another clinic on the Amazon in 2019 and also plans to add a surgical boat so they can offer cataract and other surgical procedures in 2020.

As for Gerlane, she can once again read to her sister at night, and dream of a brighter future.

Lack of access to vision care is a serious and continuing problem. OneSight depends on the efforts of partners, volunteers, and donors. Donate now and change a life.