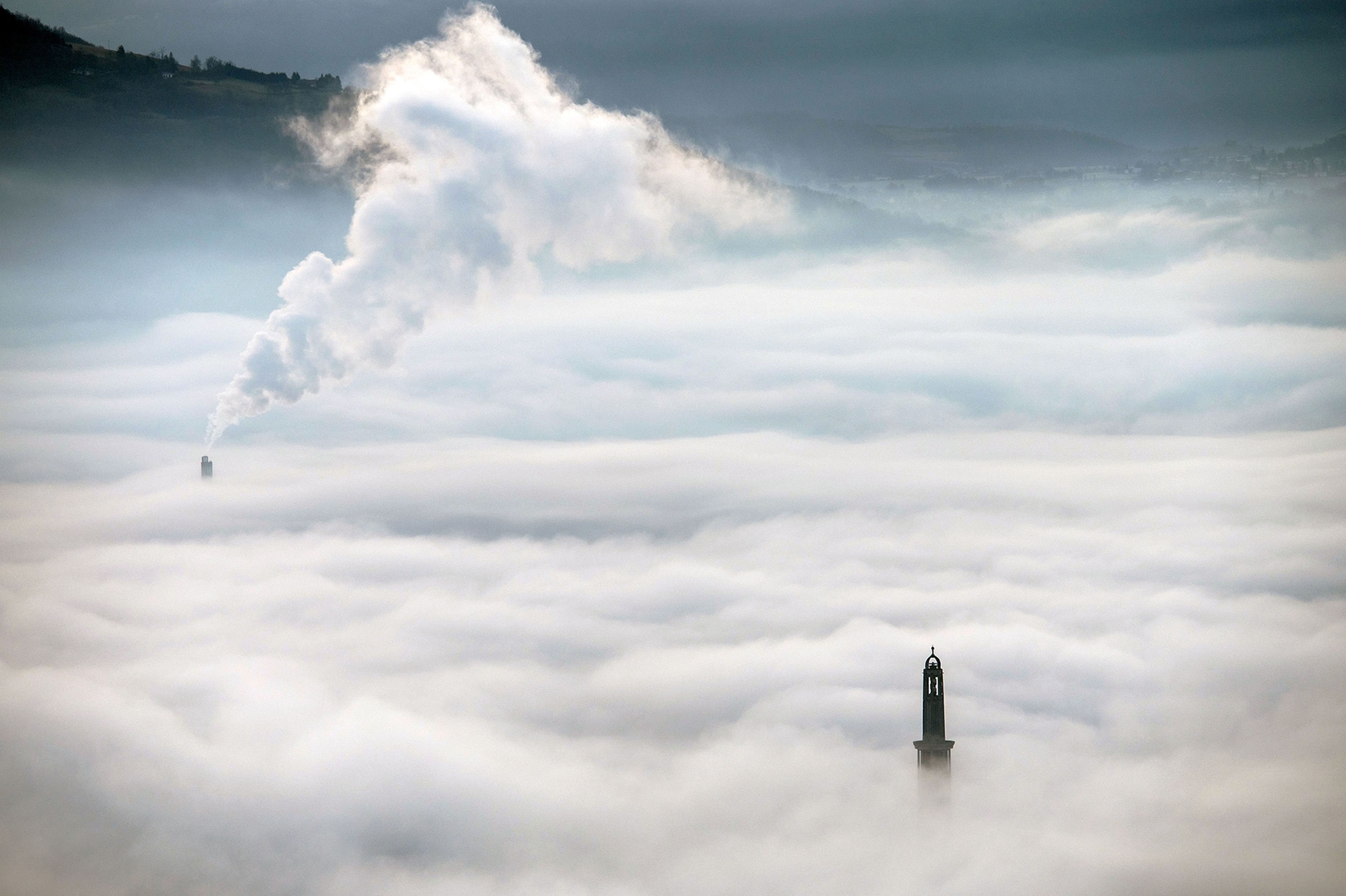 Pollution made COVID-19 worse. Now, lockdowns are clearing the air.

Even before the coronavirus, air pollution killed seven million people a year. Will today's cleaner air inspire us to do better?

Smoke from the district heating plant rises above clouds near a 360-foot observation tower in Grenoble, France.

As the novel coronavirus tears around the world, it’s exploiting our biggest weaknesses, from creaking health care systems to extreme social inequality. Its relationship with one pervasive and neglected problem, however, is more tangled: Air pollution has intensified the pandemic, but the pandemic has—temporarily—cleaned the skies.

When new evidence emerged this week that dirty air makes COVID-19 more lethal, it surprised no one who has followed the science of air pollution—but the scale of the effect was striking. The study, which must still undergo peer review for publication, found that the tiny pollutant particles known as PM2.5, breathed over many years, sharply raise the chances of dying from the virus.

Researchers from Harvard University’s T.H. Chan School of Public Health analyzed data on PM2.5 levels and COVID-19 deaths from about 3,000 U.S. counties covering 98 percent of the U.S. population. Counties that averaged just one microgram per cubic meter more PM2.5 in the air had a COVID-19 death rate that was 15 percent higher.

“If you’re getting COVID, and you have been breathing polluted air, it’s really putting gasoline on a fire,” said Francesca Dominici, a Harvard biostatistics professor and the study’s senior author.

That’s because the fine particles penetrate deep into the body, promoting hypertension, heart disease, breathing trouble, and diabetes, all of which increase complications in coronavirus patients. The particles also weaken the immune system and fuel inflammation in the lungs and respiratory tract, adding to the risk both of getting COVID-19 and of having severe symptoms.

Dominici and her colleagues illustrated the impact with a specific example: Manhattan, the current epicenter of the pandemic, where PM2.5 averages range as high as 11 micrograms per cubic meter, and where 1,904 deaths from COVID-19 had been reported as of April 4. Had particle levels averaged just one unit lower over the past two decades, the researchers calculated, 248 fewer people would have died over the past several weeks. And of course the toll has mounted since April 4.

But while pollution inhaled in the past is still causing harm today, the temporary experience of cleaner air brought about by widespread shutdowns may offer lessons for the kind of world we want to build after the pandemic.

People so accustomed to pollution they hardly think about it may realize, “Actually, I really do quite enjoy clean air: Do you think we could get it, or keep it?” says Simon Birkett, founder and director of Clean Air in London, an advocacy organization. “There’s a chance to really get people to stop, take a deep breath,” and reflect on questions like “How was your asthma during this period?”

Although a near-halt in normal life and economic activity is no one’s idea of a good way to reduce pollution, the brief respite might, in Birkett’s view, turn this dark time into “a catalyst, or a tipping point, which could get us to say ‘Clean air—there’s something special about it.’”

From China’s Hubei province to industrial northern Italy and beyond, pollution levels have plummeted as lockdowns aimed at slowing the viral spread have shuttered businesses and trapped billions of people at home. In India, where air pollution is among the world’s worst, “people are reporting seeing the Himalayas for the first time from where they live,” Lauri Myllyvirta, lead analyst at the Helsinki-based Centre for Research on Energy and Clean Air, said in an email.

India’s hastily imposed shutdowns have been devastating, leaving hundreds of thousands of migrant workers without homes or jobs. But in Delhi, where air is normally choking, levels of both PM2.5 and the harmful gas nitrogen dioxide fell more than 70 percent.

The declines are sure to be only temporary. To get healthier air for the longer term, Myllyvirta said, means shifting to clean energy and transportation, “not ordering people to stay at home at drastic economic cost.” But the cleaner pandemic skies do show how fast we can bring down pollution when we reduce our burning of fossil fuels.

The cleaner air is also a reminder of how deadly air pollution is. The World Health Organization says dirty air, both indoors and out, cuts short seven million lives annually worldwide.

In the United States, decades of regulation have led to air quality that is far better than in most of the world. In New York City, for example, PM2.5 levels actually fell 30 percent from 2009 to 2017, which has presumably saved many lives during the current pandemic. Nevertheless, air pollution still kills more than 100,000 Americans every year.

The realization that COVID-19 may match or even exceed that toll has rightly terrified Americans. But the lethal effects of air pollution are barely discussed—and activists and scientists are hoping that might change.

Even before the new Harvard study, scientists were convinced that air pollution was likely worsening COVID-19’s impact, in addition to the wide-ranging health damage it causes on its own. A 2003 study of the outbreak of SARS, the closest relative of the new coronavirus, found that death rates in China’s most polluted areas were twice as high as in the least polluted ones.

“You could bet a fiver that London and other more polluted places will have higher mortality rates [from the virus], because there’ll be more people with underlying issues,” Birkett said. Scientists also believe viruses may bond with pollution particles, enabling them to remain in the air longer and helping them make their way into the body.

The flip side is that even temporarily cleaner air can help “flatten the curve” of the pandemic, easing the burden on health care systems by reducing the number of people who experience severe COVID-19 symptoms, said Christopher Carlsten, head of respiratory medicine at the University of British Columbia’s School of Population and Public Health, in Vancouver.

Cleaner pandemic skies should also reduce other pressures on hospitals struggling with COVID-19 cases, Carlsten said. In addition to the cumulative effects of breathing dirty air for years, a large body of evidence shows that short-term changes in air quality have an immediate impact on heart attacks, strokes, and emergency room visits. All increase when pollution spikes.

Authorities in British Columbia had that hope in mind when they issued restrictions on the fires farmers typically light at the start of spring to clear old growth from fields. One region in British Columbia even banned campfires. Wood smoke is thick with PM2.5 particles.

In China, the drops in pollution resulting from coronavirus shutdowns likely saved between 53,000 and 77,000 lives—many times more than the direct toll of the virus—according to calculations done by Marshall Burke, an Earth system scientist at Stanford University. That might sound surprising, but it shouldn’t be, he said, given that air pollution causes more than 1.2 million annual deaths in China. Indeed, a 2016 study found that China’s aggressive measures to clean the air in and around Beijing for the 2008 Olympics had led to a temporary 8 percent drop in the overall death rate.

Burke emphasized that in estimating the benefit of China’s less polluted air, he was in no way minimizing the cost or the horror of the pandemic. But “these other things we do, that we can change, are also important,” he said. “Lives we lose absent a pandemic are also really important, and are lives we shouldn’t lose.”

There’s no doubt the pandemic-driven clearing of the air will be short-lived, with emissions sure to return to, if not surpass, their usual levels whenever factories start up again and people get back in their cars.

That’s already happening in China, where pollution has returned to its pre-coronavirus range, Myllyvirta said, even though some industries are not yet fully operational—a worrying hint that air quality could end up worse than before, he added.

That’s a danger elsewhere too. When the pandemic finally abates, polluting industries may well seek to make up for lost time with even higher production, said François Gemenne, a political scientist and environmental researcher at the University of Liège, Belgium. If the virus makes people fearful of public transportation, driving could increase also.

What’s more, “a lot of governments will be inclined to restart their fossil fuel industry, because that is the industry that is immediately available,” Gemenne said. With recession looming and credit markets taking a hit, analysts say investment in wind and solar power is likely to sag.

Economic troubles often prompt governments to loosen health-protective regulations. In the United States, the Environmental Protection Agency has cited the pandemic as justification for a decision to all but suspend enforcement of pollution rules. The Trump administration is also rolling back ambitious Obama-era auto mileage standards, and unraveling other regulations too.

In the middle of a health emergency, it’s exactly the wrong move, said Susan Anenberg, associate professor of environmental health at the George Washington University. On the contrary, she argued, “it’s the time to be considering whether the status quo that we had in place prior to this disaster is the one we want going forward. We don’t need to tolerate this level of air pollution.”

An earlier version of this story misstated the status of the Harvard study. It has been submitted for peer review but has not been "fast-tracked" for publication at the New England Journal of Medicine.
A pair of photos from Ahwaz, Iran, that were included in an earlier version of this story have been removed. Although parts of Iran have indeed seen declines in air pollution as a result of the response to the pandemic, those photos did not show that effect.
Beth Gardiner is the author of Choked: Life and Breath in the Age of Air Pollution .