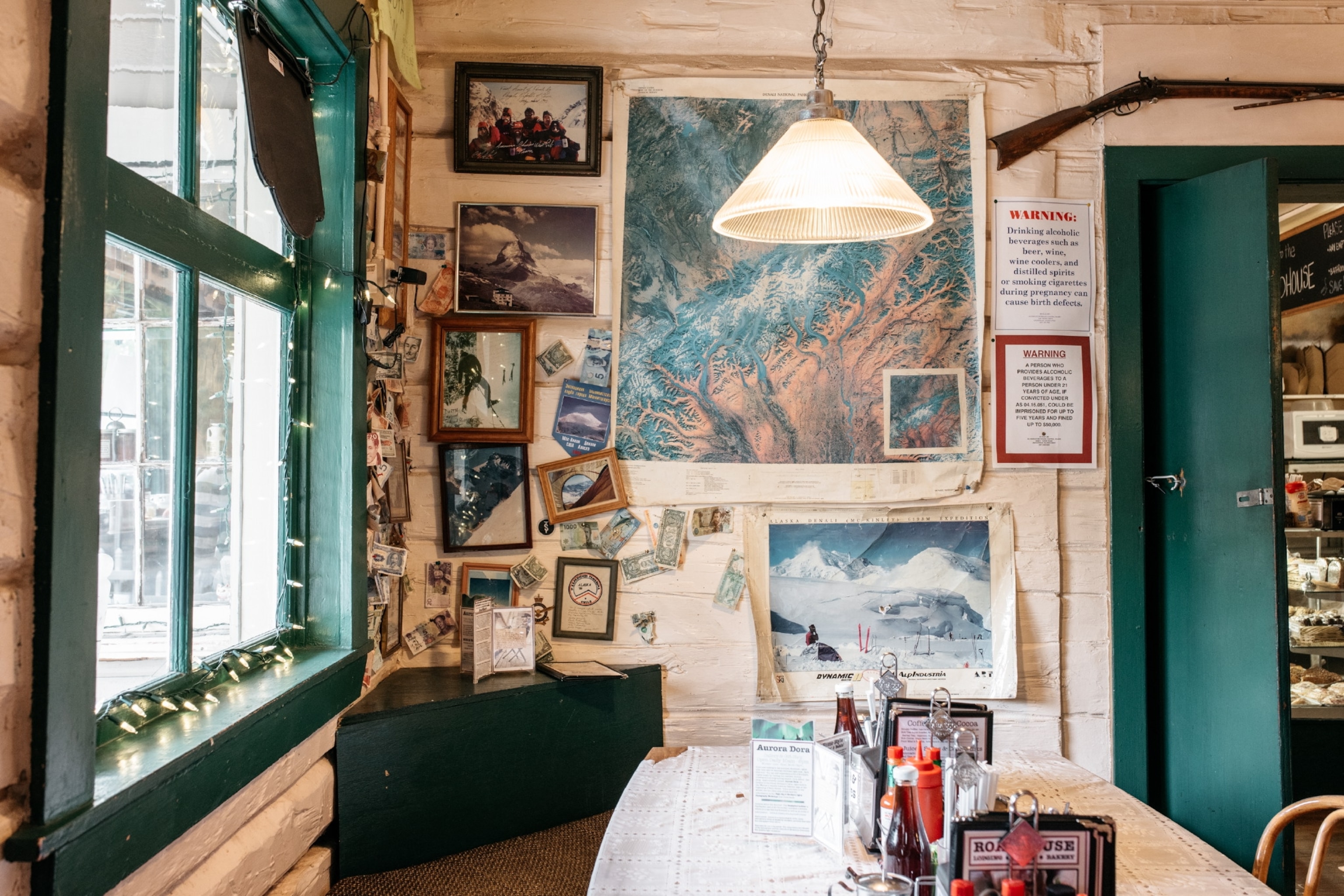 The rugged past and fragile future of Alaska’s roadhouses

Trappers and miners once bunked in the state’s rustic outposts. Now the historic structures are endangered.

Open since 1917, the Talkeetna Roadhouse offers rustic lodgings and hearty meals to adventurers on the way to Alaska’s Denali National Park. It’s one of just a few dozen historic roadhouses that remain in the state.
Photograph by Kyle Johnson

When Annie Hopper first saw the Black Rapids Roadhouse in the late 1990s, the 117-year-old log structure was a wreck of rotting timber with a dilapidated sod roof open to the sky. The series of connected cabins had been abandoned for nearly a decade along the Richardson Highway, the wild corridor between Valdez and Fairbanks, Alaska. But for much of the 20th century, the roadhouse had served meals to hungry miners and rented bunks to tired dog-sled drivers.

Bewitched by the dilapidated building’s backstory—it was once owned by Frank Glaser, a legendary Alaskan who raised wolf pups for dogsledding and fought grizzlies—Hopper and her husband purchased the building and the land it sits on in 2001. “We didn’t know what we were going to do with it. But, one thing was for sure: I was going to save that building and its’ history,” she says. “We’d keep some of that wild, adventurous spirit alive.”

This summer, after two decades of restoration and rehab funded by state grants and income from the modern inn the couple built just up the hill, the roadhouse is set to open again. It’ll be a rustic bunkhouse hostel, a place intrepid travelers can use as a base for exploring the Alaska Range.

In its heyday, Black Rapids was one of more than 3,000 roadhouses sprinkled throughout the northern territory and eventual 49th state. Today, it’s one of just a few dozen remaining, some serving as inns, others converted into museums or private homes. Preserving—and seeing them—provides a reminder of Alaska’s settler era.

Rugged outposts in a rugged land

Thousands of gold miners, trappers, and other fortune seekers streamed into the U.S. Territory of Alaska in the late 19th and early 20th centuries. To serve them, roadhouses started popping up along the road, trail, and river systems they used. The structures ranged from large tents (sometimes fashioned from muskrat pelts) to massive timber lodges. They were usually spaced every 10 to 12 miles—thought to be the distance a human could dogsled or walk with all their belongings in a day.

Because these were often the sole businesses in the areas where they were built, roadhouses served multiple purposes, renting out bedrooms or bunks, doling out hot meals (caribou stew, sourdough pancakes) and cold whisky. They also functioned as community centers, post offices, saloons, and trading posts for both settlers and Indigenous people. It all depended on the size of the building and the attitude of the owner. Many had stables or kennels for horses or teams of dogs.

“They were gathering places for all kinds of people,” says Helen Hegener, an amateur historian who wrote Alaskan Roadhouses. “They met the needs of those traveling in these harsh regions.”

Still, they were important reprieves from the elements on Alaska’s migratory highways, many of which crossed Indigenous lands. Depending on the weather and where travelers were headed, it could take over a month to hike into the interior from cities like Valdez and Skagway, making roadhouses vital to adventurers and locals, particularly when winter storms hit.

“The people who owned the roadhouses and those traveling between them really leaned on each other,” Hopper says. In 1917, the Donnelly Roadhouse (about 10 miles north of Black Rapids) took in a family stranded in 30 below zero temperatures. The couples’ infant daughter, believed lost in the snow and ice, was found alive a few hours later by two trappers who brought her back unharmed.

Alaska Nellie was a frontierswoman who operated the Grandview roadhouse in the south central part of the territory. She once dogsledded through a blizzard to rescue a stranded, frostbitten mailman before delivering his packages to a waiting train.

“It’s incredible,” says Hopper. “So many of the stories from that era are about surviving.”

The expansion of railways in the early 1900s, followed by better roads and automobiles, made many roadhouses obsolete by the mid-20th century. Once people were able to travel greater distances more quickly, the need for such closely spaced outposts plummeted. Ones on little-used trails were either scrapped for parts or left to be consumed by nature.

“It was sort of natural selection at work,” says Joanne Antonsom of the Alaska Historical Society. “The owners needed to survive, and if the roadhouse was no longer a viable business, they left and pursued other options.”

The roadhouses that have remained open are endangered by weather, decay, and the elements. “Historically these roadhouses have been fire hazards,” says Tracey Porreca, a docent at Sullivan Roadhouse, now a museum in Delta Junction. “They used to put oil and tar on the outside of the building to keep the wood from drying out and becoming brittle. All you have to do is light a match and they’re just gone.” In recent years, roughly one roadhouse a year has been lost in a fire.

When Hegener wrote Alaskan Roadhouses in 2015, she estimated that roughly three or four dozen of the original several thousand roadhouses still stood. Most of the ones that are preserved are on major thoroughfares: the Richardson Highway (where Black Rapids is located); the Glenn Highway, which connects Anchorage to Glenn Allen; and the Park Highway, which links Fairbanks and Anchorage.

Black Rapid’s story is just one example of the myriad challenges associated with preserving an old building in regions where the weather is unforgiving and getting supplies is arduous. During her decades-long renovation, Hopper has been inspired by how much rougher life was for the original roadhouse owners. “As an Alaskan, you can’t know who you are until you know the pioneers who came before you and the Indigenous people who came before them,” she says.

Alaska’s frontier past really wasn’t that long ago. In less than 100 years, residents went from spending months training dog sledding teams for traversing untracked regions to turning a key in a car ignition and breezing down the highway. The roadhouses are an important connection between that era and today.

Bunking down in history

Some remaining roadhouses still serve as informal hotels and gathering places; others have been converted into frontier-life museums. The 1920s Fox Roadhouse, just north of Fairbanks, has been incorporated into the Silver Gulch Brewery.

“The best way to preserve historic buildings is simply to use them,” says Judy Bittner, a state historic preservation officer with Alaska’s Department of Natural Resources. “The abandoned roadhouses deteriorated so quickly.”

Roadhouses-turned-museums offer a peek at the rough-and-rugged life people lived here. Rika’s Roadhouse near Big Delta on the Tanana River displays 1920s and 1930s furnishings including a wooden radio, a vital link to the outside world in earlier times. Sullivan Roadhouse showcases an old-school oil drum stove (imagine it draped with trappers’ wet fur coats) and black-and-white photos of early 20th-century hunting expeditions.

A handful of roadhouses near major junctions or national parks still host overnight guests just as they did in the gold mining and trapping boom years. Talkeetna’s eponymously named, largely unchanged roadhouse has been open since 1917. The chalet-like timber building is located roughly 60 miles (as the bird or bush plane flies) from the summit of Denali or 150 miles from the entrance of the national park. Contemporary travelers can stay in bunk rooms and take meals at long tables, passing the apple butter over sourdough pancakes. Gakona Lodge and Meier’s Lake Roadhouse have also both been around for a century, and now serve river rafters and fishermen who use the tiny town of Gakona as a base.

When it reopens later this year, Black Rapids Roadhouse will have its own solar-powered generator, WiFi, and a snowplow for dig outs from winter blizzards. The hardy souls who slept here in the early 20th century would have dined on moose soup by lantern light and hauled their own water. But despite those modern upgrades, it’ll serve travelers with a similar sense of adventure.