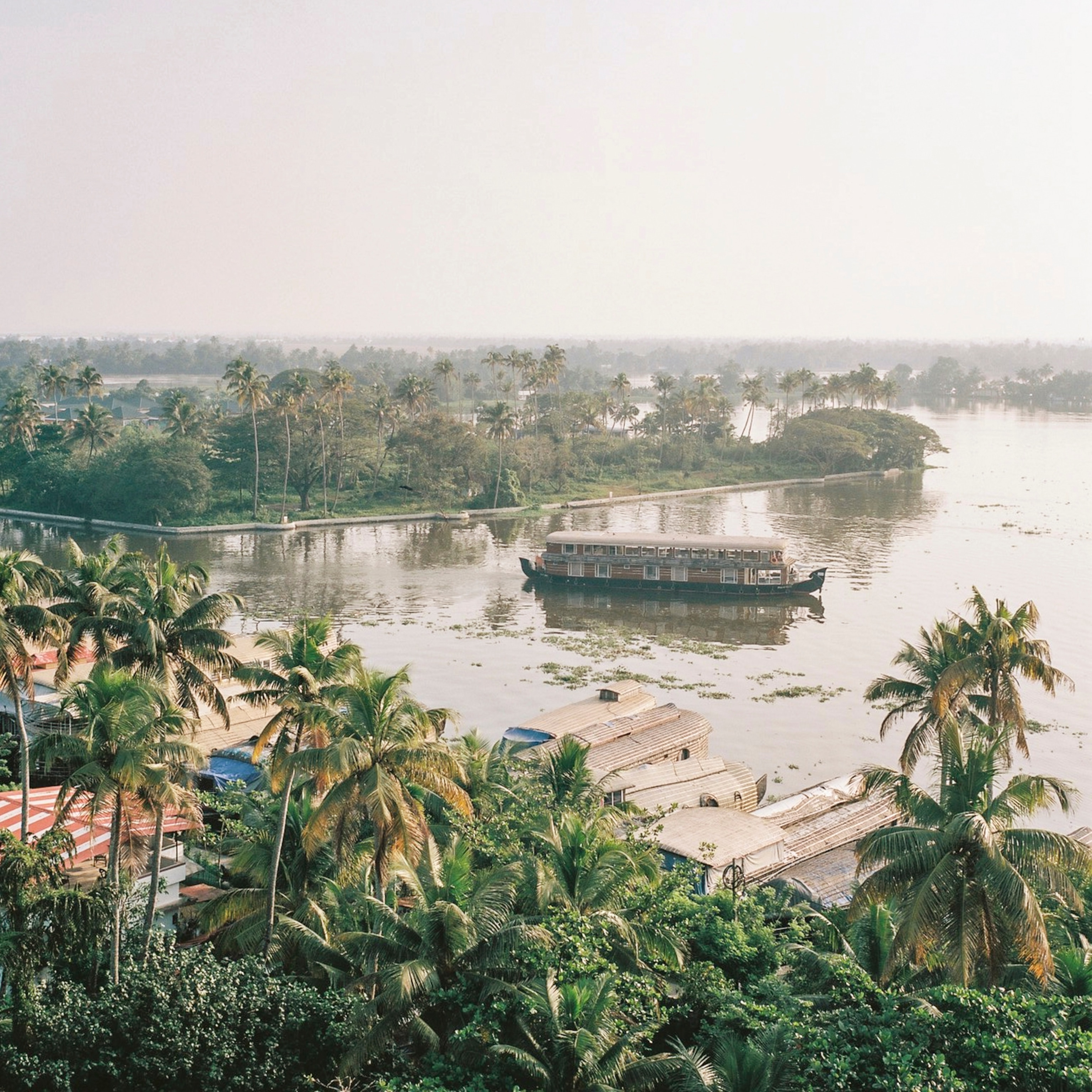 Lake Vembanad, the largest lake in India, brings tourism to the southern Kerala state. Houseboat cruises help travelers explore its nature and old world charms, but the vessels use a lot of power and cause pollution. New green initiatives, including solar-powered boats, offer possible solutions.

Ripeesh Pillai’s houseboat is tricked out with two brand-new solar panels, hovering on the two-bedroom craft’s roof like giant space saucers. Intended to harness the hot sun that bakes Kerala, India’s southernmost state, the panels are part of a new green initiative to rehabilitate Lake Vembanad and its backwaters, which lure vacationers with houseboat tourism.

Solar panels are among the new green initiatives meant to address environmental issues that plague this region and to make houseboat tourism sustainable. With the pandemic waning and houseboats cruising again, many wonder if enough is being done to restore the health of the lake and its backwaters.

A watery paradise in ‘God’s Own Country’

Kerala is one of India’s top tourist destinations, anchored by the 1,000 or so houseboats in Lake Vembanad. Captained by local boatmen, kettuvallams move to old world agricultural rhythms. Travelers sleep and dine onboard, stopping in villages to eat fish curries or learn to weave coconut pulp into coir rope.

A UNESCO Ramsar site—which designates wetlands of international importance—Lake Vembanad is a biodiversity hotspot teeming with fish and birds. The watershed also supports some 1.6 million people, many of whom work in fishing, farming, and tourism.

But, pollution, unethical fishing practices, and emissions from the idyllic-seeming houseboats threaten the whole region. In the last decade, the lake has seen a 40 percent drop in its fish population, including native black clams, freshwater prawns, and karimeen (pearl spot fish).

Zoom in to see other places mentioned in this story.

Kerala bills itself as “God’s Own Country.” A narrow state—360 miles long and only 75 miles at its widest point—it is wedged between the Arabian Sea and the Western Ghats, evergreen mountains dotted with spice and rubber farms on India’s Malabar Coast.

Every summer, monsoons roll in from the Indian Ocean and crash into the Ghats, sending runnels of fast-moving water down the hillsides and into Kerala’s five lakes and 44 rivers. Thirty-four of these rivers and their tributaries flow directly into Lake Vembanad, creating a wetland ecosystem with over 90 species of resident birds, 50 migratory birds, and at least 150 species of fish.

Over time, monsoon rains and the incessant pounding of tidal waves have carved out channels and spillways in this waterlogged landscape, creating a lacy web of canals or backwaters.

Those backwaters flow in and out of Lake Vembanad, which stretches from Alleppey up to the city of Kochi before emptying into the Laccadive Sea. A small fishing village transformed into the epicenter of the maritime spice trade by 16th-century Portuguese merchants, Kochi is cleaved by islets and waterways and studded with architectural relics of its indigenous Malayalam and colonial Portuguese, Dutch, and British rulers.

In Alleppey and the adjacent Kuttanad district—the “rice bowl” of Kerala—backwater channels meander through fertile countryside hemmed by rice paddies and polders (alluvial fields that sit below sea level).

Since at least 3000 B.C., kettuvallams have plied these waters, ferrying rice, coconuts, and spices to the coast. The boats are roughly 100 feet long and 13 feet wide with hulls made without any nails.

In Beypore, a seaside village 93 miles north of Kochi, you can still see traditional shipbuilders at work. Teak and anjali (wild jackwood planks) are fastened with coir rope and coated with a black resin made of boiled cashew shells. An arched roof of thatched bamboo and coconut husks shades cargo and crew, who used to punt the vessels with long bamboo poles.

Kerala’s waterbound way of life drifted more or less intact into the 20th century where it collided with post-independence India’s population growth and food crisis. Until the early 20th century, farmers around Lake Vembanad only produced one crop of rice a year. Tacking on another harvest required access to freshwater irrigation.

(Learn about India’s efforts to clean up its holiest river.)

This led to the construction of the Thanneermukkom barrage or bund, a concrete wall blocking saltwater from entering the lake’s lower sections. Completed in 1975, the barrage doubled the rice harvest, but it disrupted the lake’s natural filtration system and migratory routes for birds and fish.

At the same time, roads replaced water transport, cutting the journey from the backwaters to Kochi from several days to two or three hours. No longer in demand, most kettuvallams were dry docked until the early 1990s, when an out-of-work engineer named Babu Varghese retrofitted one with sleeping quarters and a modern bathroom, jumpstarting Kerala’s houseboat tourism juggernaut.

Houseboats can have one cabin or several and range from basic to luxurious. Guests rent them for a few hours or a week; the deal usually includes a local boatman captain and a steward who cooks and guides. Most depart from Alleppey and float through the countryside.

“In the beginning, houseboats were not regulated. They generated income, so the government encouraged them,” says Gopinath Parayil, founder of sustainable tourism company The Blue Yonder. Although Parayil still offers houseboat charters, he now steers clients toward lesser-known backwater routes and focuses on immersive cultural experiences that support local communities and protect the environment.

(See how one Indian city took its beach back from the sea.)

In 2018, a tragic flood displaced communities and damaged houseboats, including Pillai’s. By the time the countryside dried out and Pillai completed his repairs, COVID-19 had grounded houseboat tourism. The ecosystem was beginning to buckle, and “finally, there was some acknowledgement that something needed to be done,” says Parayil.

Despite its appearance, “the ecosystem is fragile,” says Jojo Devassy, project coordinator for the Ashoka Trust for Research in Ecology and Environment (ATREE). “If one thing fails, then everything falls apart.”

Houseboats are heavy and require significant power to move. For solar panels to propel a kettuvallam, they would need to be large and have efficient converters and batteries. Plus, those panels require unobstructed exposure to the sun, ideally from the south.

Kerala’s smoldering rays don’t shine on cue. “The summer and winter monsoons shave off at least 100 days of sunlight a year. The boats are constantly moving, and they aren’t always oriented south. They aren’t connected to a grid, so they have to produce and store all the energy they need,” explains Devassy. “Most boat owners find it easier to buy electricity from a village house when they dock for the night.”

Entry-level solar kits begin at 80,000 rupees ($1,050) and only produce enough energy to run fans and lights during the day. Buying electricity for one night costs roughly 500 rupees ($7) per bedroom.

Government programs continue to promote the initiatives. Pillai’s new solar conversion kit—only marginally stronger than his original one—was subsidized by India’s Union Ministry of Energy. Another regulatory body, the State Transport Water Board, introduced an all-solar powered public commuter ferry on Lake Vembanad in 2017 and is currently retrofitting its entire ferry fleet. The agency is also building a fiberglass houseboat purported to run entirely on solar power; it eventually hopes to market it to traditional houseboat owners.

It’s not only the houseboats

According to Devassy, regulators tend to blame the diesel motors of houseboats for Vembanad Lake’s pollution. In reality “diesel pollution accounts for only 10 to 15 percent of the problem,” he says. “The buildup of microorganisms and the lack of septic treatment facilities are bigger issues. The barrage is another. Then, you’ve got all this silt washing down from the Ghats causing lake levels to drop.”

Nonetheless, positive changes are underway. The Port Authority, which licenses houseboat operators, is adding several more septic treatment facilities on the lake. ATREE is working with the Kerala government to rehabilitate black prawn and karimeen populations and to identify additional sites for bird sanctuaries.

For Parayil, helping Lake Vembanad means giving it a break. “We encourage travelers to experience lesser-known backwaters north of Kochi, especially on the Malabar Coast, and not necessarily on houseboats. Spreading the numbers to other destinations reduces the impact.”

Parayil is also pushing policymakers and communities to take a serious look at climate change. Higher ocean temperatures create more vigorous monsoons, he says, and “this is exactly what happened with the floods in 2018.” In the backwaters, where channels cut through paddies below sea level, even a slight increase in rainfall can lead to catastrophe.

Michael Dominic, CEO of CGH Earth Enterprises, a sustainable hotel and houseboats company, believes that solar-powered boats might be part of that greener future. “But we are simply not there yet,” he says. “With diesel, we need a lot of panels and a lot of space.”