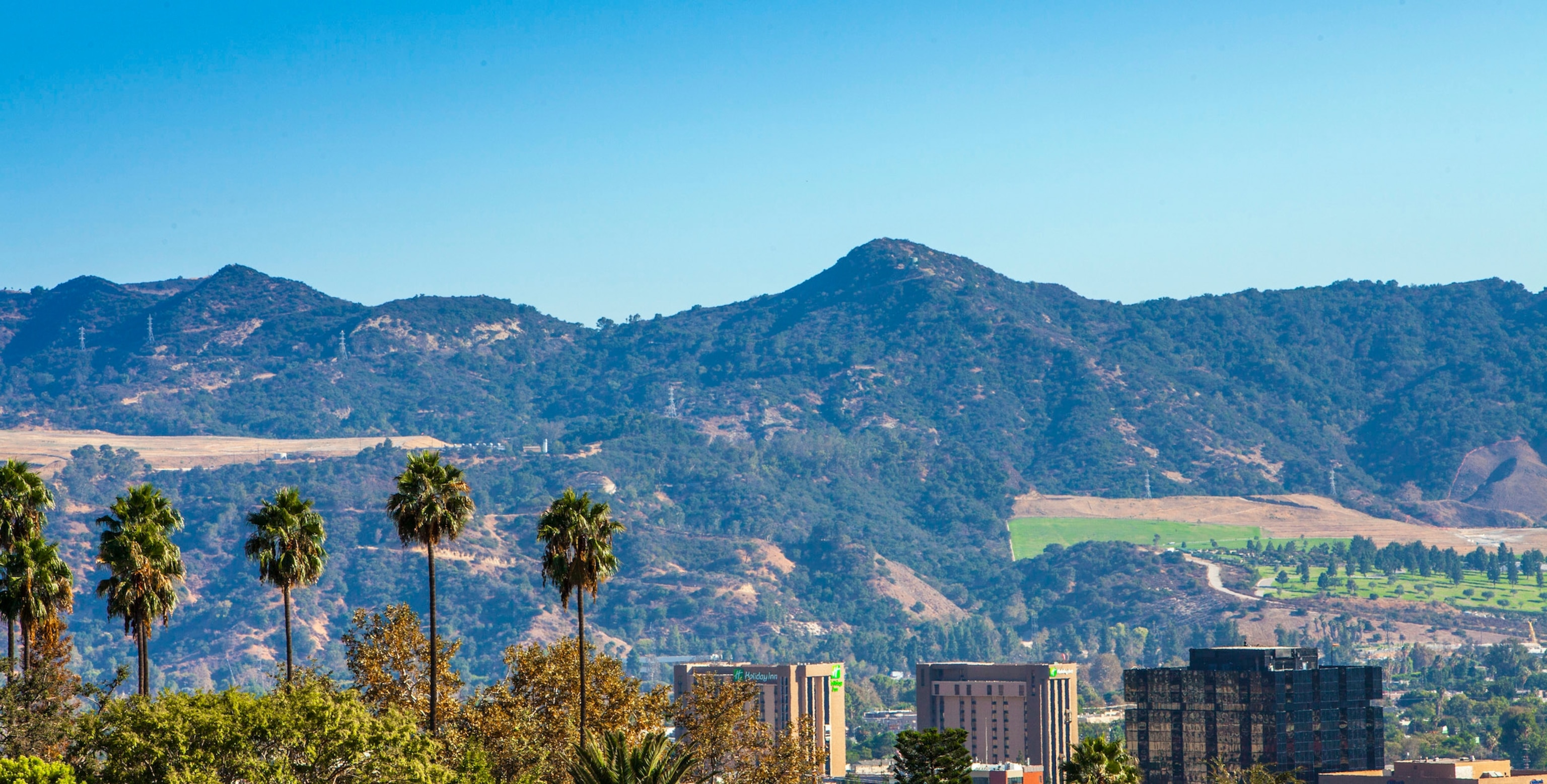 The Media Capital of the World lives up to its name, supplying L.A. with a healthy dose of cool.

With so much to see and do, Burbank is jam-packed with exciting events and adventures just waiting to be discovered.
IMAGE COURTESY: JOHN ELLIS / BURBANK HOSPITALITY ASSOCIATION
This content was written by and is brought to you by our sponsor. It does not necessarily reflect the views of National Geographic or its editorial staff.

In the foothills of the Verdugo Mountain, separated from Hollywood by Griffith Park without straying far from Los Angeles’ well-known attractions, Burbank lives where effortless cool meets understated charm. Known as the Media Capital of the World, it’s still the place to be when it comes to visiting the real-life settings where favorites like Top Gun, Friends, Reservoir Dogs, La La Land, Dunkirk, and Back to the Future were shot. But Burbank’s identity is more of a feeling than anything–the same one you’ll get as you step from your airplane at Hollywood Burbank Airport, the warm wind sweeping across your face. The city’s two most walkable areas are a quick ride away, including Burbank’s tree-lined downtown along San Fernando Boulevard and the vintage-strewn district that follows Magnolia Boulevard. That’s where you’ll begin, soaking in the no-frills authenticity of the city that gave birth to Hollywood glamour. Leave your rose-colored glasses and Instagram filters at home, because in Burbank, where palms mingle with mountains, those come stock. Here’s how to soak in the classic West Coast Americana like a local.

Even the ever-cool Angelenos like to play tourist now and again, which means you just can’t go to Burbank without popping into the Media District to take a studio tour at Warner Bros. Explore behind the scenes across the 110-acre backlot to get a taste of how Hollywood makes its magic as you visit the sets of classic shows, peek into the prop department, and watch as to-be-released episodes and movies are filmed all around you. Alternately, spend a little extra time on set by reserving tickets to see a taping of Conan or The Ellen DeGeneres Show. Media hunger not yet satiated? Visit nearby Universal Studios Hollywood for some theme-park thrills, or see what the buzz is about at the new Blizzard Arena, where esports come to life.

Another recent addition to Burbank’s media landscape, Flappers Comedy Club and Restaurant opened in 2010, welcoming upward of 40 shows every week to its three stages, including a family-friendly “Two Milk Minimum” weekly afternoon set and special celebrity drop-ins, which have featured everyone from Kevin Hart to Jerry Seinfeld and Whitney Cummings.

The Verdugo Mountains lend Burbank both a dramatic landscape and excellent views—and Wildwood Canyon Park serves as your basecamp for getting high above it all. A range of options at the park cater to different levels of experience, but the Vital Link Trail will take you straight up on a challenging but rewarding ascent of Verdugo Peak. Time it right to see the sun dip below the horizon over La La Land in the distance.

Views like that necessitate a custom soundtrack. Head to Atomic Records, a used-only shop, to skip the snobs and let your fingers wander over thousands of titles that span decades of musical history. Allow extra time for the crates of 50-cent scores, which co-owner Steve Alper stocks with anything he can’t sell in two days for $3 or more, meaning everything from esoteric instrumental cuts to Sammy Davis Jr., Fleetwood Mac, and Miles Davis. On select days, those records go for free to clear up space.

More than 50 stores stay open late along Magnolia Blvd. in Magnolia Park the last Friday of every month for Ladies and Gents Night Out, when live music and nearly three dozen food trucks line eight blocks of the street from 6 p.m. to 9 p.m. It’s prime time to buy a local souvenir, as many of the shops offer samples and discounts on their wares.

The Southern California diet wouldn’t be complete without a healthy dose of Mexican food. For authentic flavors prepared in beautiful, traditional simplicity, tuck in at Guisados, where the thick corn tortillas are handmade and the walls feature works by local artists and photographers. The real art, however, lies in the tender homestyle braises spilling out of every taco: tinga de pollo or bistek en salsa roja? Best to order one of each.

There’s no argument on the go-to spot for a sweet treat no matter time of day: Since the family emigrated from Cuba to California nearly 60 years ago, Porto’s Bakery & Cafe has served drooling customers national treats like guava-and-cheese pastries, stuffed potato balls, and loads more to make your mouth water. Porto’s is well known at this point (it was voted as the #1 eatery in the US on Yelp in 2016), and for good reason.

For a casual lunch or weekend brunch, the fare at Olive & Thyme captures both the cheese board grazers and salad and sandwich crowd, weaving the slightest hint of Middle Eastern influence across its varied menu. Plus, it’s perfectly positioned in the Media District to help you chill out between hoofing it from studio to studio.

Alternately, should you be window shopping along Magnolia, caffeinate and grab a bite at Romancing the Bean, a local favorite that serves a strong cup alongside vibrant light dishes (and a number of sweet treats) thanks to the Le Cordon Bleu–trained chef/owner Kerry Krull.

If you’re chomping at the bit for a chance to get a taste of the country, head to Basecamp, a dinette that borders the L.A. Equestrian Center and Griffith Park’s 50-plus miles of trails. There you can fuel up with hearty classic American breakfast or lunch fare before saddling up for a horseback excursion, or take a load off after your ride or trek through Griffith Park with a cold craft beer.

The heart of Downtown Burbank runs red—or white or rosé, depending on the glass you order at Urban Press Winery. Quickly garnering a devout following since opening its doors at the end of 2016, the urban winery stays true to its name, contracting with vineyards in Northern California’s Wine Country to produce vino from grapes that owner Giovanni D’Andrea supplies himself. Every glass comes with an education, but the knowledgeable staff leaves pretense at the barrel.

Please be respectful of copyright. Unauthorized use is prohibited.
Book your next trip with Peace of Mind
Search Trips

For a local beer straight from the source, visit the taprooms at Verdugo West Brewing (bring on the Gigil rice lager!) and Lincoln Beer Co., where it’s all about the Anytime Fiesta (a habanero- and vanilla-tinged red). Once you’ve tried the local flavors, cool off with a cold one from Tony’s Darts Away, a bottle-free bar with 38 taps, each pouring a California brew. In true West Coast fashion, the beer menu is split conveniently into “IPA” and “Not IPA” sections, plus the spot is decked out with pool tables, dart boards, and a mix of elevated bar bites to keep you there ’til early morning. Time your visit right to partake in the annual vegan chili cookoff.

Recognize those cool hues that line the vinyl seats at The Blue Room from somewhere? Memento might jog your memory—the dive bar moonlighted in the film as Fredy’s Bar. Outside of its media appearances, the bar is a great spot to grab a cheap drink—be it a PBR or a key lime martini—feed the jukebox some coins, and soak in L.A. noir.

For a nightcap with a different scene, head to Commonwealth, one of the few fine dining spots in Burbank. But unless you’re out for a date night or special occasion, skip the entree altogether and go straight for the creamy butterscotch pudding, topped with a crisp of prosciutto and paired with any number of grapes from the restaurant’s healthy wine list.

For more information on Burbank and to start planning your trip, go to visittheusa.com/destination/burbank