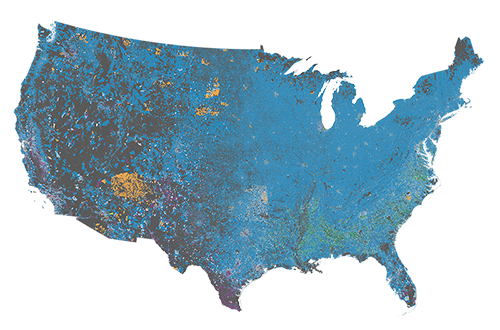 Where we live, block by block

Mapping American diversity reveals not just a snapshot of today but the imprint of two and a half centuries of migration, conflict, and prosperity. Read the stories.

What these colors mean

Greater than 75% of population

Claiming more than one race

Mexican Americans have long been one of the largest ethnic groups in the city, which is now nearly half Hispanic. Next

The community is concentrated in two areas divided by a strip of non-Hispanic white neighborhoods. Next

Coastal areas from Pacific Palisades to Palos Verdes Estates are mostly non-Hispanic white and affluent. Next

No ethnic or racial group constitutes a majority in Houston, making it one of the most diverse U.S. metropolises. Next

It has nearly doubled in population since 1990, and 93 percent of newcomers are non-white or Hispanic. Next

Loose zoning laws have kept rising land values in check, but a legacy of segregation still haunts Houston. Next

Patterns of failing schools, environmental hazards, and sub-standard infrastructure remain in many of its historically non-white neighborhoods. Next

Blacks arriving from the South in the early 20th century’s great migration found affordable housing in neighborhoods such as the South Side. Next

This area was once home to immigrants from European countries like Ireland, Italy, and Poland. Next

What became historically black neighborhoods after the great migration remain black today, despite a 19 percent drop in Chicago’s black population since 2000, largely from gentrification. Next

Hispanic and white populations are increasing, but the Chinese population is growing the fastest, especially in Chicago’s vibrant Chinatown. Next

Nearly 65 percent of residents in Chinatown are foreign-born. Next

The four major racial and ethnic groups each make up at least 10 percent of the populace but are mainly segregated in the city’s five boroughs. Next

Black communities in eastern Brooklyn and Queens continue to shrink as they migrate toward the South to look for more affordable housing. Next

Non-Hispanic whites make up the largest share of the population in Manhattan and Staten Island. Next

The Hispanic population has boomed, especially in the Bronx, where that ethnicity represents 52 percent of the populace. Next

The city is also now home to more than a million Asians of varied heritage; they’re one of every eight New Yorkers. Next

Washington is one of the few cities where growth is being driven by whites—rather than by Latinos, Asians, or immigrants—as blacks move to the suburbs. Next

Southeast and Northeast remain predominantly black, while Northwest holds much of the District’s white population. Next

Hispanic residents make up 11 percent of the population, distributed mostly in Northwest and Northeast—many more live in the suburbs along the District’s northern border. Next

While over 4 percent of the city is Asian, most newcomers choose to take up residence in the suburbs of Maryland and Virginia. Next

Central D.C. and areas around the National Mall are dominated by businesses and government buildings, with few areas dedicated to housing. Next

Virginia had the most slaves of any state. After the Civil War, ex-slaves became sharecroppers growing cotton, sugar, and tobacco on land rented mostly from white owners.

About 56.2 million acres, including remnants of ancestral lands, are reserved for Native American tribes forced to move by waves of new arrivals over four centuries.

Settled by Spain long before the U.S. was founded, New Mexico is the only part of the nation where many Hispanics report their ancestry as Spanish, not Mexican.

Large numbers of immigrants fleeing the Mexican Revolution went to South Texas in the early 20th century. Next

Florida took in Cubans after the Cuban Revolution in the 1950s. Next

Concentrated black populations in many cities came from the great migration that brought some 28 million blacks and whites from the South between 1910 and 1940. Next

Many Europeans settled in the North or Midwest, avoiding the South, where demand for labor was slow because of slavery and a weak economy after the Civil War. Next

A large concentration of residents identify as Hispanic in California’s Central Valley and Washington’s Columbia River Valley. Both areas are major agricultural producers that employ many laborers.

EPluribus Unum—Out of Many, One. The traditional motto of the United States encompasses the hope that different peoples can unite as one nation. Every 10 years, mandated by the Constitution, the U.S. Census Bureau conducts a tally to keep track of the populace. It parcels the country into some 11 million units, many as small as a city block, and endeavors to record the ethnic or racial character of the people within.

Mapping this diversity reveals not just a snapshot of today but the imprint of two and a half centuries of migration, conflict, and prosperity.

This story is part of Diversity in America, a National Geographic series covering racial, ethnic, and religious groups and examining their changing roles in 21st-century life.