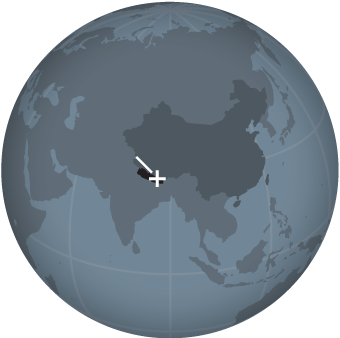 Photographer Renan Ozturk used specially modified drones to capture Everest and its surrounding peaks in 360-degree panoramas. His photography also helped the 2019 expedition he’d joined identify areas—from angles never before possible—to search for the body of British climber Sandy Irvine, who disappeared in 1924. Ozturk operated a drone from Camp I on Everest's North Col to complete this image.
The journey begins in the North Side Base Camp at the foot of the Rongbuk Glacier. The team members acclimate to the 17,000-foot elevation and prepare their gear before setting off on the route to the north face of Everest. The expedition team includes photographer Ozturk, six other climbers, and 12 Sherpas, as well as dozens of others tasked with cooking, cleaning, and trip logistics. The team will follow a route established by George Mallory's expeditions in the 1920s that hooks along the East Rongbuk Glacier to approach Everest. They'll stop at the Intermediate Camp just shy of a field of ice towers.
The ice towers that make up the East Rongbuk Glacier are massive: Many would dwarf 10-story buildings. This route, from the Intermediate Camp to the Advanced Base Camp, is known as the Miracle Highway because of the prominent glacial moraine that cuts through otherwise impassable ice towers. Glacial melt caused by climate change has made this route to Everest more accessible in recent years.
Piloted from Camp I, this sunset view by drone shows the north face of Everest above the North Col. Everest is one of few places on Earth that are high enough to intersect with the South Asia jet stream, and at Camp I the team endures hurricane-force winds of about a hundred miles an hour while awaiting their summit attempt. Climbing Everest from here requires ascending above 26,000 feet into the “death zone”—where oxygen deprivation, compromised decision-making ability, and unpredictable weather conditions have contributed to the deaths of hundreds of climbers, including Sherpas.

Photographer Renan Ozturk and team summited Everest on May 30, 2019, and then continued to search the mountain for clues from an ill-fated 1924 summit attempt. Learn more in this feature story.