Here's what it's like to live at Everest base camp

Every year a pop-up city is built at the foot of the world's tallest mountain.

Located at the foot of the Khumbu Glacier, Everest Base Camp is encircled by some of the most iconic peaks on Earth. Thousands of trekkers a year hike to Everest Base Camp and along other circuits in Nepal without ascending the peaks.

Every year a pop-up city is built at the foot of the world's tallest mountain.

Hundreds of international mountaineers journey to Mount Everest each spring hoping to make a successful ascent of the world’s highest peak. The vast majority of their time, however, isn’t spent climbing up the flank of the mountain. It’s spent resting, acclimatizing, and preparing at the mountain’s two principle base camps, one on the Nepal side and one on the opposite side of the mountain in Tibet. Life at base camp is an odd mix of mundane domesticity, logistical challenges, and the occasional flash of life-or-death drama. 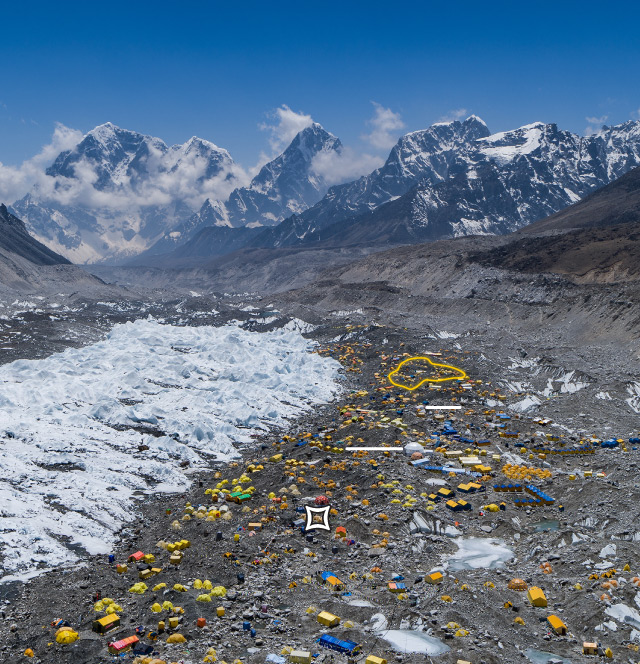 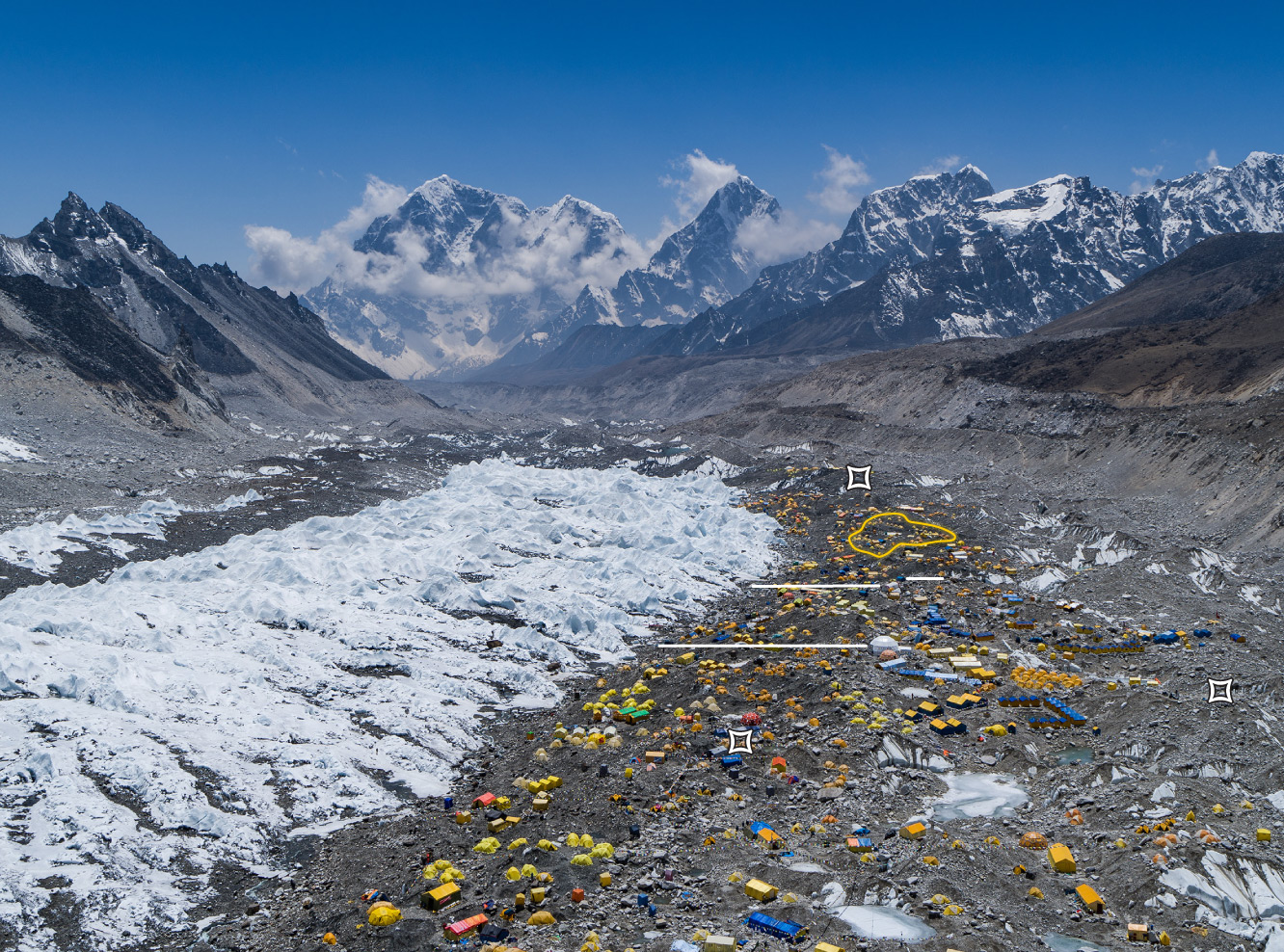 Since commercial climbing trips began on Mount Everest in the 1990s, tourism to the peak has soared, creating a bustling city at 17,500 feet at the base of the Khumbu Glacier in Nepal. Here is a look at some points of interest in the temporary, thin-air metropolis. Heli-pad, south: Helicopters help evacuate sick or injured clients for care in Kathmandu. In recent years, the use of helicopters has increased greatly in Nepal. National Geographic Camp: For the 2019 climbing season, a National Geographic Society team is busy doing scientific research. Everest Link: Climbers stay connected with the rest of the world through pre-paid high-speed broadband Internet cards. Nepali-owned Everest Link sells the cards to both guided clients and locals. Everest E.R. tent: The Himalayan Rescue Association’s “Everest ER” provides walk-in services for basic ailments. For more serious concerns, patients are evacuated to Kathmandu via helicopter. As climbers move higher up the mountain, their bodies are increasingly at risk for a number of ailments, including pulmonary edema, cerebral edema, and blood embolisms. Big Dome Tent: The guide service Climbing the Seven Summits has a huge dome tent in the center of camp, which has clear panels for epic views of the surrounding peaks. Sagarmatha Pollution Control Committee Camp: This NGO established in 1991 by the people of the Khumbu region manages solid waste removal from camp and along the trekking trails. Heli-pad, north: Helicopter services are big business in Nepal, where aspiring climbers trek for a week to arrive at base camp. Those willing to pay the high fees can hire a helicopter to reduce travel times between villages.

A tale of two camps

There are two principle routes to the summit of Everest—each with its own base camp and unique flavor of tent-dwelling experience. The North Ridge, on the Tibet side of the mountain, offers easier access: It’s possible to drive vehicles all the way to base camp. Many North side expeditions originate in Kathmandu, Nepal, and then drive across the border into China to reach the mountain.

The South Col route, meanwhile, is accessed through Nepal and typically requires a week of trekking to reach the foot of the mountain, though helicopters have taken a big bite out of the relative remoteness of this side of the mountain.

Camping at the limits of physiology

Both camps are pitched at about 17,500 feet for good reason. Somewhere between 18,000—19,000 feet, the human body enters a state of decay, above which life is not permanently sustainable. Scientifically and simply put: You don’t want to try living any higher than here.

A well-provisioned base camp provides mountaineers with a home base from which they can dash up the mountain for three to five days at a time, and then return to recover in the relative comfort of thicker air.

According to popular Everest blogger Alan Arnette, Nepal's Ministry of Tourism has issued 375 Everest climbing permits for the 2019 spring season; on the North side, there are reportedly 144 foreign climbers. It’s illegal to simply show up at base camp with a climbing permit, pitch a tent, and try to climb the mountain. All foreigners must climb the mountain through a locally licensed logistics company, which supply base camp accommodations, meals, and basic bathroom facilities.

For every one foreign climber, there are three to four local workers living in base camp as well—either climbing sherpas working on the mountain itself or base camp staff—the cooks, dishwashers, servers, and team managers who all look after the guided clients.

This small army of service industry workers are overwhelmingly Nepali, though not all ethnic Sherpas, and they are the engine that keeps base camp humming.

So, what’s for dinner?

It’s been said that an army fights on its stomach, and it's the same on Everest. Expeditions invest massive amounts of effort and resources to provide their clientele with the best food they can. Most commercial expeditions strive to provide three square meals a day, which include a protein, carbohydrate, and some form of fruit or vegetables. Staples like rice, pasta, eggs, canned fruit and vegetables, and flatbreads (locally known chapati) form the bulk of the ingredients, but a creative chief will find ways to keep the diet interesting. Regular shipments of fresh produce delivered via yak, helicopter, or jeep help immensely.

In between mealtimes, there’s plenty of hot drinks, dried fruit, candy bars, and the omnipresent can of Pringles potato chips for snacking.

Expedition campsites are generally taken on a first come, first serve basis. Some savvy organizers even send local representatives to stake a claim to prime real estate months in advance. With hundreds of people camped out in a few square miles, base camp organizers face many of the same problems as urban planners in small cities.

At Nepal's Khumbu Glacier base camp, the Sagarmatha Pollution Control Committee insures that basic sanitation standards are upheld. Chinese officials perform the same function at the at the Rongbok Glacier base camp. Bathroom tents are constructed so that waste can be removed in trash bag-lined plastic barrels, to be hauled to lower elevations and disposed. Trash is likewise collected and removed. Although these practices ensure modern camps are kept relatively clean, venture off the trail a bit and you will discover large piles of trash—the remnants of expeditions from earlier, less enlightened times. On the Nepal side efforts are ongoing to gradually remove all this trash. This year, in an effort to limit the amount of trash and waste, Chinese officials restricted access to the Tibet base camp to climbing expeditions, forbidding tourists from visiting.

Like all cities, there are some “neighborhoods” that are better than others, which is to say not all Everest teams enjoy the same accommodations. What separates a high-end camp from budget accommodations? The fanciest commercial outfitters now provide walk-in wall tents with beds, unlimited electricity through gasoline generators, hot showers, strong reliable Wi-Fi, projectors for after-dinner movies, and even dedicated tents for yoga and stretching. But such creature comforts don’t come cheap. The most luxurious operators charge upwards of $100,000; while budget outfits cost between $25,000 - $40,000.

Don't show up at Everest base camp looking for disco balls and epic parties, however. Most teams remain relatively insular and turn in early—until they've summited, at least.

At the end of the season, most guided climbers beeline it for home as quickly as possible, but there's still weeks of work left for the base camp staff to dismantle everything and see that it transported down valley for safe storage. Many operators rent storage space in nearby villages to avoid the long journey back to Kathmandu.

Many large expeditions have their own doctors embedded with the teams. Otherwise, organized medical services are limited on both sides of the mountain. If you have a serious medical issue, it’s imperative to leave base camp as quickly as possible and descend to lower altitude.

At the Khumbu Glacier base camp, the Himalayan Rescue Association’s “Everest ER” provides walk-in services; patients with serious issues are evacuated via helicopter to Kathmandu as quickly as possible. At the Rongbok Glacier base camp, there’s primary medical care in Tingrit, a four-hour drive in a four-wheel drive vehicle.

You either love it or hate it

For some, base camp is a form of purgatory—a temporary asylum where one must spend four or five weeks in exchange for the chance to climb Everest. For others, it’s the ultimate summer camp, a place and community unlike any other on Earth. Either way, for those who want to ascend to the highest point on the planet, these are the two starting points.

Editor's Note: Writer Freddie Wilkinson is currently reporting from Nepal's Everest base camp and the surrounding region. Check back for more dispatches from the 2019 climbing season. The nonprofit National Geographic Society helped fund this story.