The failed expedition was one of the grimmest chapters in the history of Arctic exploration. New analysis may shed light on its mysterious fate.

The failed expedition was one of the grimmest chapters in the history of Arctic exploration. New analysis may shed light on its mysterious fate.

This story appears in the September 2019 issue of National Geographic magazine.

For centuries the Northwest Passage seemed little more than a mirage. John Cabot urged his ships into the unknown in 1497 and 1498 to find it, but failed. Martin Frobisher, Henry Hudson, and James Cook searched icy northern waters for it, in vain. In May 1845 a celebrated British explorer and naval officer, Sir John Franklin, took up the quest to find a route between the Atlantic and Pacific Oceans through Arctic waters. With orders from the British Admiralty, Franklin and a crew of 133 sailed out from the Thames in two massive naval vessels, H.M.S. Erebus and H.M.S. Terror, each specially equipped for polar service. It was the beginning of the grimmest disaster in Arctic exploration.

On paper, the expedition seemed to lack for little. The crew was young, tough, and seasoned. The ships, sheathed in iron, bristled with the latest Victorian-era technology—from steam engines to heated water and an early daguerreotype camera. The vessels carried more than three years’ worth of food and drink, as well as two barrel organs and libraries with some 2,900 books. Two dogs and a monkey kept the men company in their quarters.

But these small floating worlds were no match for the Arctic’s frozen seas. On Admiralty orders, the expedition sailed to one of the most treacherous, ice-choked corners of the far north. By September 1846, both vessels were imprisoned in sea ice northwest of King William Island. They remained so for at least a year and a half of brutal polar cold.

were trapped in sea ice for 19 months.

Survivors set out on foot but were never

heard from again. Archaeologists hope the 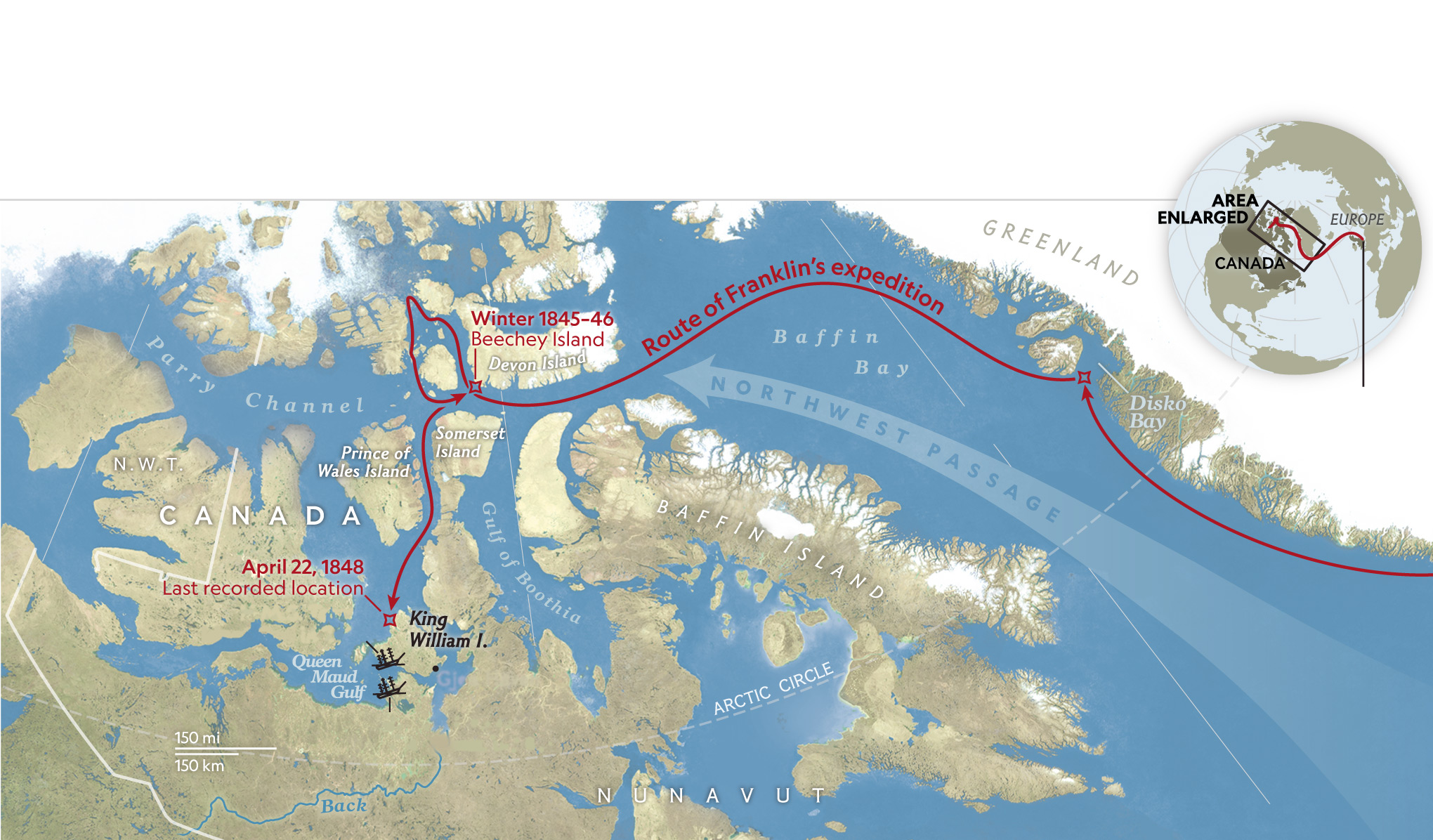 Deep in the Canadian Arctic, Franklin’s ships were trapped in sea ice for 19 months. Survivors set out on foot but were never heard from again. Archaeologists hope the sunken ships, located in 2014 and 2016, will yield answers.

By April 1848, 24 men were dead, including Franklin himself. The rest had abandoned the ships. In a terse statement stuffed into a cairn on King William Island, the expedition’s new commander, Francis Crozier, noted that he and others were heading out on foot for the Back River, perhaps to find better hunting, or possibly hoping to reach a fur-trading outpost more than 700 miles away. It was Crozier’s last known communication with the outside world. (More than a half century later, in 1906, Norwegian explorer Roald Amundsen would be credited as the first to navigate the treacherous Northwest Passage.)

For years after Franklin’s expedition stalled, search parties combed the region’s coastlines, hoping to find survivors and, when all hope was gone, clues to the expedition’s fate. They found deserted campsites, the bones of dead men, and hundreds of mementos, from fragments of cotton shirts to silver dessert spoons. Inuit hunters recalled seeing starving crewmen dragging heavy sledges along the ice, and later finding evidence of cannibalism. The British public was reluctant to believe it, and the final days of the Franklin expedition remained the subject of enduring fascination and mythmaking.

Then, in 2014, Erebus was discovered in relatively shallow water south of King William Island, almost exactly where historical Inuit testimony had placed it. Two years later, Terror was located at the bottom of a large bay after Inuit Canadian Ranger Sammy Kogvik led researchers to the area. Terror is so well preserved, says Parks Canada archaeologist Ryan Harris, that it resembles a ghost ship: “It just beggars the imagination what might lie inside.”

A second research team, supported by the government of the Canadian territory of Nunavut, is now sifting through other important clues found on land. Led by Douglas Stenton, an archaeologist at the University of Waterloo in Ontario, these scientists are mapping the sites where Franklin crew members pitched tents, downed rations, and huddled beneath blankets and bearskins. By studying these locations and analyzing the human remains and artifacts recovered from them, Stenton and his colleagues hope to shed new light on the expedition’s final tragic days.

On a cold, blustery day in the Arctic hamlet of Gjoa Haven, Kogvik recalls the joy of seeing Terror appear for the first time on a sonar screen. Like most Inuit in the region, Kogvik had heard stories about the lost expedition. He also had one of his own. While out fishing with a friend along the west coast of King William Island, he had once seen a big wooden pole sticking above the water. He thought it could be a ship’s mast. So in September 2016, when Kogvik was working with a team from the Arctic Research Foundation, a Canadian nonprofit, on another scientific project in the immediate area, they decided on the spur of the moment to check out the place. After hours of searching the seafloor with side-scan sonar, Kogvik and his colleagues found Terror, about 80 feet underwater. “Every one of us was giving high fives,” he recalls.

Today Parks Canada archaeologists are planning to excavate both Franklin ships, but Erebus is their priority. Harsh Arctic conditions now threaten the vessel. Sea ice has scoured the stern and crushed the area where Franklin had his cabin, entombing or scattering its artifacts.

More haunting still are the conditions aboard Terror. Thick sediment mantles the upper deck, but the ship’s wheel, helm, and bulwarks look eerily intact. Windows and hatches, mostly unbroken, still seal the contents of the cabins.

Studies and excavations at the two wreck sites are expected to take years, and archaeologists hope to settle a long-standing controversy. Historians have assumed that most of Franklin’s men died in 1848 on the foolhardy quest to the Back River. But in the 1980s, David Woodman, a retired mariner and history writer based in Port Coquitlam, British Columbia, analyzed the reports of Inuit witnesses. According to these accounts, few of Franklin’s men died on the trek. Instead many returned to the ships after Crozier wrote his note, and managed to sail farther south. When the two vessels finally sank, the castaways survived on salvaged provisions and occasional hunted game, until the last man died in the early 1850s.

But the accounts given by some 30 Inuit witnesses contained many ambiguities and contradictions, in part because of translation problems. So the Parks Canada team hopes to recover written records from the shipwrecks, such as logs or personal journals, to help reveal what went wrong with the expedition.

In Britain, families of the dead men were left to wonder about their sons and husbands and how exactly they met their end—questions that linger among many descendants today. And some relief may be in sight. Stenton and his team have taken samples from skeletal remains and sent them to Lakehead University in Ontario. Geneticists there successfully extracted DNA from the remains of 26 crew members. Now Stenton is gathering DNA samples from living descendants. By comparing the historical and modern DNA profiles, he and his colleagues hope to identify some of the bodies by name.

Moreover, the Parks Canada team may add to these identifications. Historical Inuit witnesses reported boarding one of the ships and finding a crewman’s body lying on a floor. The underwater archaeologists have yet to encounter any human remains, but if skeletons or bones turn up, the team will consider DNA testing.

For the first time in more than a century, hopes are high that the story of the lost expedition will be told. The optimism is bringing a new sense of opportunity to remote Gjoa Haven, where young Inuit are landing jobs to watch over and protect the Franklin wreck sites from looters. And officials are drawing up plans to expand the local museum, so it may one day house and display finds from the fabled Franklin ships.

“Tourists are already coming here,” Kogvik says proudly. And enticed by the icy wonders of the Northwest Passage and the famous story of Franklin and his men, “more will be coming next year.”

Canadian science writer Heather Pringle specializes in archaeology. Her forthcoming book on the Vikings will be published by National Geographic in February 2021.