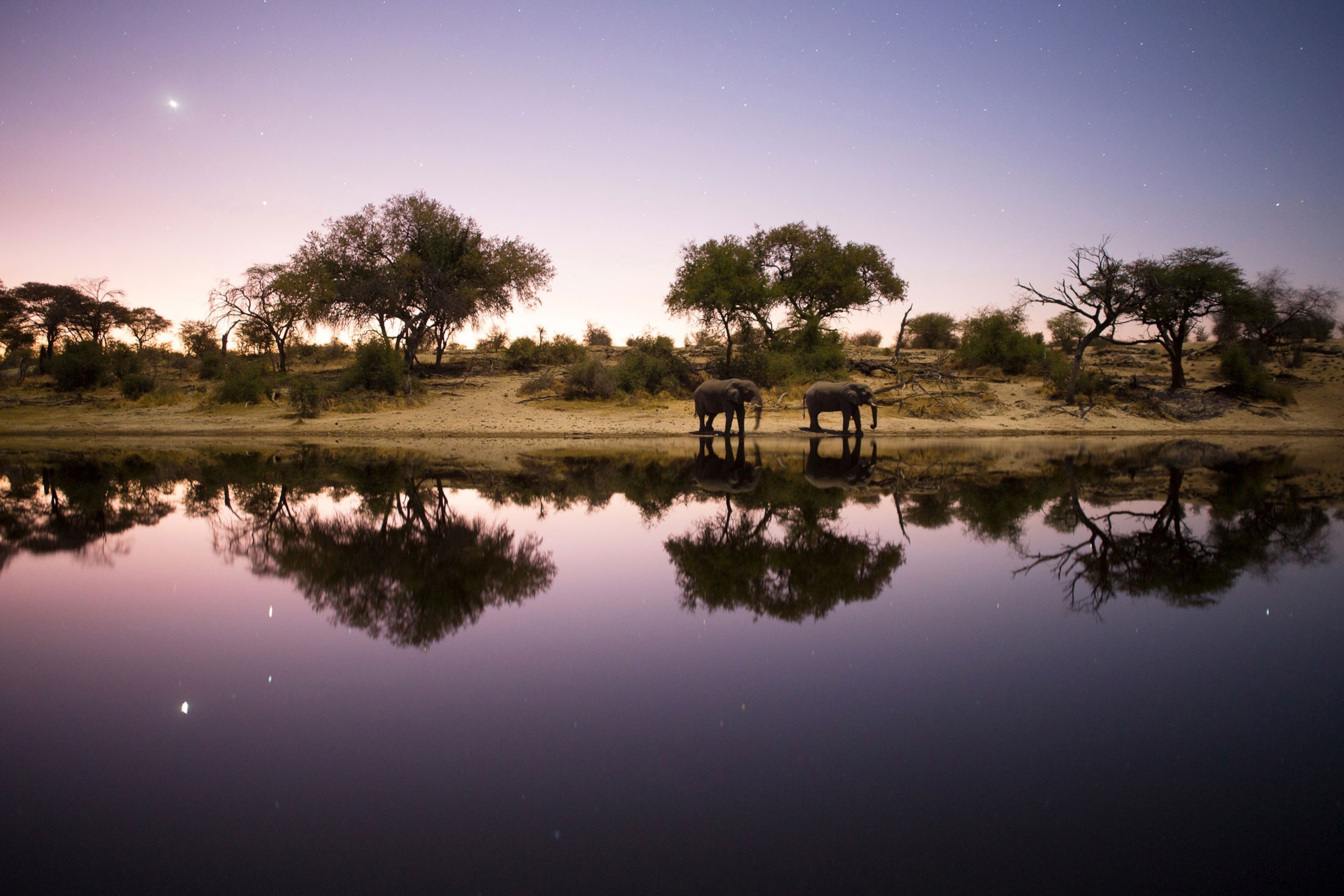 How to film hippos, crocs, and lions and not lose a limb or a camera operator

Director Neil Gelinas discusses the challenges and rewards of making of the National Geographic documentary film Into the Okavango.

The Okavango River Basin provides a vital source of water to about a million people, the world’s largest population of African elephants, and significant populations of lions, cheetahs, and hundreds of species of birds.
Photo by Mark Stone

When filmmaker Neil Gelinas embarked on the project that would become Into the Okavango, his first feature-length documentary, which premieres December 14 at 9 p.m. EST on Nat Geo Wild, he had never camped before—ever. He also had never witnessed a hippo attack or been driven mad by sweat bees or worked with a camera operator who insisted on going barefoot and had a thing for petting hyenas. But then when you spend five years making a feature film deep in the watery recesses of one of Southern Africa’s last inaccessible wildernesses, you’re bound to expand your comfort zone on many fronts.

Gelinas has a job that requires a giant comfort zone. For much of the last decade, he has traveled to far flung locales around the world to produce, direct, film, and edit television shows and documentaries for the National Geographic Society, including last year’s Wild Galapagos: Pristine Seas. In 2011 he was in South Africa scouting for stories when he met ornithologist Steve Boyes, who impressed him with his deep knowledge and passionate description of the threats to Africa’s rapidly shrinking wilderness. That encounter led to Into the Okavango, which in turn has led to the Okavango Wilderness Project, which seeks to scientifically survey and work with the governments of Angola, Namibia, and Botswana to protect the Okavango watershed’s source rivers.

Gelinas recently sat down to discuss the challenges of filming in the Okavango watershed—large swathes of which are a former war zone—and explain the no camping thing.

Steve Boyes, right, and filmmaker Neil Gelinas fend off a cloud of sweat bees after a long day on the river, during which one mokoro was capsized.

Before you’d met Steve Boyes, you had done a lot of film and television work centered on conservation subjects. What was it he said to you that made you go all in on a feature-length film?

I think some of it was the timing. We’re the same age, and when we met we were both 31. I think that’s around the age you start to really grasp what’s going on in the world and also recognize that time is running out to make important changes.

And it wasn’t necessarily what he said—because, yeah, I’ve heard other people talk about losing habitat etc.—but it was the way he spoke about the symmetry of nature and the fundamental importance of wilderness, and what he wanted to do to preserve it, and why it had to be studied and protected. It seemed deeply personal to him. I just hadn't really heard anyone talk about it with that amount of genuine passion. It’s actually how I begin the film: You hear Steve describing what’s at stake.

Into the Okavango Trailer

From National Geographic Documentary Films, Into the Okavango chronicles a team of modern-day explorers on their first epic four-month, 1,500-mile expedition across three countries to save the river system that feeds the Okavango Delta, one of our planet’s last wetland wildernesses.

Is it really true that you hadn’t camped before this project?

Sort of. In 2012 I visited an island in the Okavango Delta where Steve used to manage a camp. At the time Steve was there with his brother Chris, studying the Meyer's parrot, and I went to film them and see how the two of them were on camera. So I showed up and, yeah, I hadn’t ever really camped at that point. So I arrive and Steve was like, "Go put up your tent." And I was like, "Well, I'll just figure this out." Since then, I’ve worked on other projects where I had to learn to camp in pretty much every climate, including the Arctic. I still haven’t done just for fun yet. Maybe someday.

The source rivers that feed the Okavango begin in Angola, which has remained difficult to access because of issues related to the civil war that ended there in 2003. What did you find when you got in there?

The vegetation and the landscape are extremely well preserved because land mines are everywhere, and no one's going to go in there. As for wildlife, we believe that there were a lot of elephants that used to be there. Now we're not seeing many. They were harvested to fund the fighting.

I think all the animals are more skittish than in other places because hunting is so prevalent in that region. People set big fires in the bush and shoot the animals as they flee. But at night, we’d set up the camera traps, and suddenly you'd see a black mane lion, elephant, cheetah, leopard—all are there. There are few wildernesses left on earth that you can actually bring back. All you have to do there is get rid of the landmines and stop the burning, and the wilderness and the animals will thrive.

The film has several very powerful animal scenes—how did you get these shots?

For the underwater croc scenes, I reached out to Roger Horrocks. I’d seen some of his TV work and called him up and the next thing we’re out in a boat in Botswana with air tanks and rebreathers and a safety guy, and they’re diving in channels looking for crocs. It was the most expensive scene we shot, but thanks to the vision of our executive producer Clara Wu, who was a true creative partner on this project, she made that scene happen, and it opens the film.

For the hippos, Jon Betz rigged a zip line over a channel. A drone makes too much noise and would scare them away or cause them stress, so he put up a zip line that skimmed just above the water. The camera is rigged to a pulley with a motor, and it's totally silent. So, you see this great shot that looks right into the eyes of the hippos.

Then for the lions, we had this other guy Kim Wolhuter, who goes around barefoot all the time. He's only got maybe four shots in the whole film, but they’re some of the best. He got an amazing shot of lions with a thunderstorm behind them.

What do you mean “he goes around barefoot”?

He doesn’t wear shoes, ever. Kim showed up in Washington in the dead of winter barefoot. He lives in Botswana and gets immersed for years living around hyenas or cheetahs or other animals. I think it's mostly hyenas. He's petting them, and he's filming them. Now in the Okavango around animals not used to him, he wasn't able to do that, but he did get right up close to some lions mating. The light was bad and that shot didn’t make the cut, but still amazing.

What was the scariest moment during filming?

I guess it would probably be one hippo attack. We were in mokoros (canoes) moving down the river. We heard something in the bushes. The plan is if you disturb a crocodile, you go to the middle of the river—the deepest part—and give the croc its space along the shallows. But if it’s a hippo, then the hippo wants to go immediately to the deepest part, so you want go to the shallow part. Well, Steve and Giles Trevethick were in the lead mokoro, and thought the animal in the bushes was a croc—but it was a hippo. So as they headed for the middle of the river, their mokoro went right over the top of the hippo. It knocked the end of their mokoro with its tusk and flipped it literally in the air like it was nothing. Steve and Giles were grasping onto the boat. My boat captain wouldn't go any closer. So I'm filming with a long lens as best I can. We had no idea what would happen, and then thankfully, Chris saw the hippo move away and yelled “swim” and they just swam for the side.

Editor’s note: This interview has been edited for clarity and length. To read more about this project check out National Geographic Magazine's coverage.