Specially-trained dogs, one of which recently searched for Amelia Earhart's body, use their marvelous noses to find human cremains.

Nobody should have to lose a loved one twice. Some dogs are helping to prevent that from happening.

When wildfires like the ones that ravaged California this summer sweep into a neighborhood, there is no time to collect valuables. Homeowners flee with bare essentials. Among the precious things that must be left include cremated remains, or cremains, often stored in a receptacle kept on a shelf or mantle. But now, professionally trained detection dogs are being dispatched to recover these human ashes from the charred ruins of destroyed homes.

Human cremains have a distinct odor that trained dogs can easily identify, even in a house that has been totally destroyed by a wildfire that likely topped 1,500 degrees Fahrenheit.

These dogs are “not fixed on a person’s scent—they’re fixed on human cremains,” says Engelbert.

The Carr Fire in California, which burned for 39 days over late July into early September, destroyed over 1,000 homes and burned almost 230,000 acres. Seven homeowners contacted the non-profit Institute for Canine Forensics for help finding cremains, a service provided free of charge. Save for one instance—when the site was compromised by people walking through it—the detection dogs found cremains in ashes that can be 8 inches deep, sometimes in a matter of minutes.

Piper, Jasper, and Jett—all who were on site at the Carr Fire recently—work with the Institute for Canine Forensics to recover human cremains, including those of Native American ancestors lost to time. In 2017 Piper and Engelbert were flown to Nikumaroro Island, in Kiribati, to look for traces of Amelia Earhart as part of an Institute for Canine Forensics search team sponsored by National Geographic and The International Group for Historic Aircraft Recovery.

The four dogs on that trip all detected traces of human remains beneath a tree on the island where items were found: a jackknife, a woman’s compact, a zipper pull, and glass jars. But no human bones were found on the island that could have positively identified either Earhart or her navigator, Fred Noonan.

How the Nose Knows

A dog’s extraordinary sense of smell—up to 100,000 times more acute than a human’s— relies in part on a structure called the olfactory recess (right). This labyrinth of paper-thin bones is lined with millions of scent receptors attached by neurons to the brain, where the scents are analyzed. Sniffing up to five times a second, a dog constantly surveys its surroundings and even knows through which nostril it detects a scent. 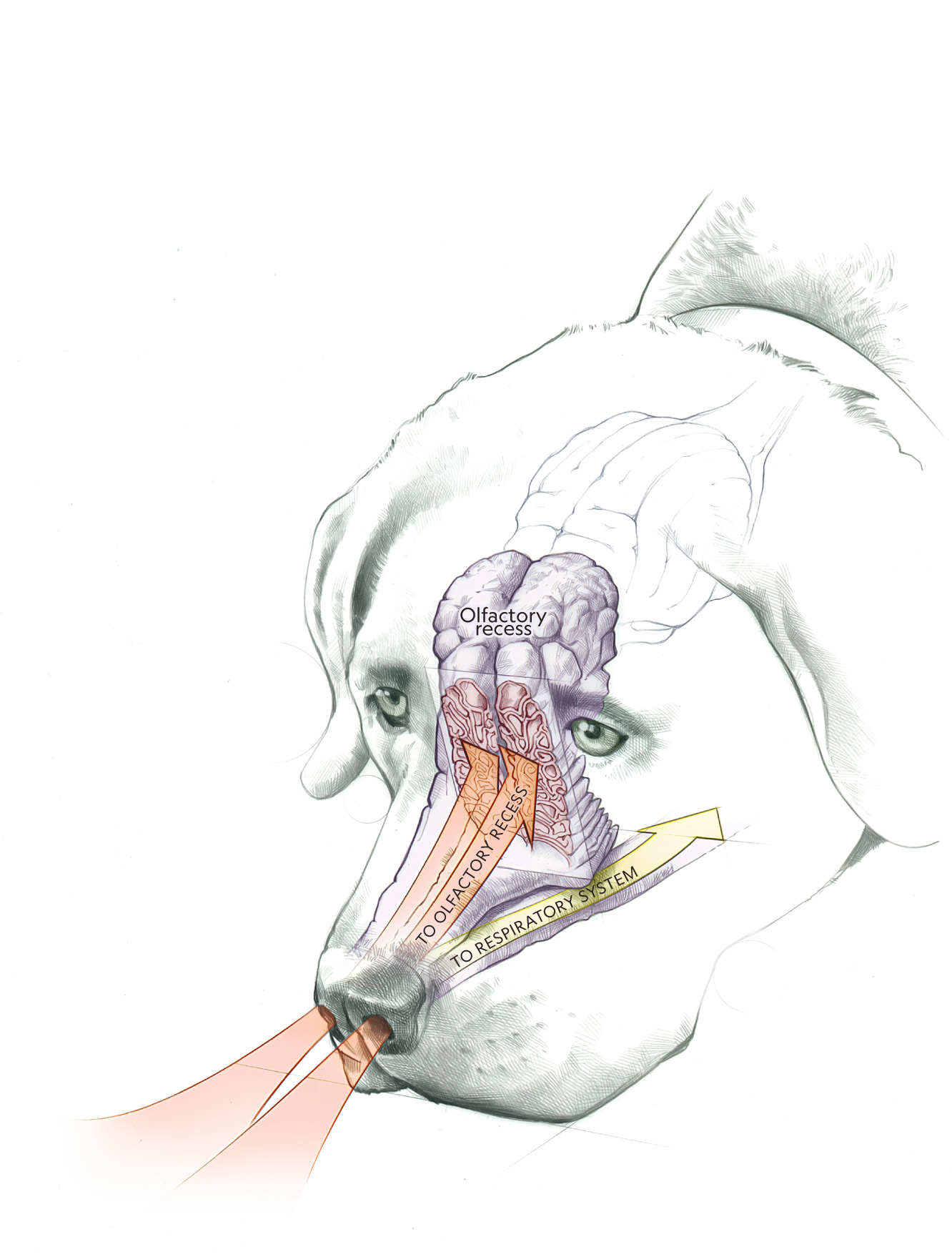 How the Nose Knows

A dog’s extraordinary sense of smell—up to 100,000 times more acute than a human’s—relies in part on a structure called the olfactory recess (right). This labyrinth of paper-thin bones is lined with millions of scent receptors attached by neurons to the brain, where the scents are analyzed. Sniffing up to five times a second, a dog constantly surveys its surroundings and even knows through which nostril it detects a scent.

The ability to sniff out such subtle odors is possible because of dogs’ remarkable noses. The animals can smell at least one part per trillion, which is at least three times more sensitive than the most sensitive mechanical sniffers. And compared to human schnozes, dogs’ smelling abilities are up to 100,000 times better, by some measures.

According to a 2016 study in Frontiers in Veterinary Science, canines can detect the equivalent of “one drop of a liquid in 20 Olympic-size swimming pools.”

Dogs have hundreds of millions of olfactory receptors—compared to just a few million in humans—and their nostrils register scents independently from each other, giving them the ability to smell in stereo. Their super-smelling abilities allow them to identify bombs, drugs, missing people, and to detect medical conditions like cancer.

When humans reward dogs for smelling specific scents, the animals learn to hone in on those odors, and ignore all others. That’s how detection dogs are made.

According to Sue Stejskal, special deputy and forensic canine handler at St. Joseph County Sheriff Department in Michigan, any dog can learn this skill but certain breeds partner better with people, and have the drive and focus to be successful.

As for training a dog to recognize a certain odor, it’s the same as any other sort of training, she says: “Find out what the dog loves and give them what they love for finding it.”

For example, Stejskal trained her Canadian-born spaniel, Maple, to detect bed bugs. She lined up paint cans with holes in them and put different things inside. Into one went bed bugs. When Maple dipped her nose down and sniffed the correct paint can, she got a reward. As time went by, Stejskal decreased the number of bed bugs in the paint can. Then she introduced other distractions—dead bedbugs, toys, food—continuing to reward Maple when she got it right.

Separately, Stejskal trained Maple to sit as a signal that she found the bed bug odor. The next step was to link the two behaviors: find scent, sit, get reward. Then, in possibly the trickiest part, Stejskal changed it up so that Maple learned to work in all sorts of environments.

When working the Carr Fire sites for human cremains, Engelbert put Piper, a black-and-white border collie, through her paces just as she did during the search for Earhart’s remains. Piper is one of eight detection dogs Englebert knows of that can specialize in human cremains. Institute handlers are training three more dogs to do that work.

Engelbert’s signal to Piper that it’s time to get going is simple: She says, “Do you want to go to work?” Piper nearly always is.

Once at the site of the burned home, the owners will show the team where the cremains were kept, whether in the kitchen or on the mantlepiece. A small keepsake urn holds about three tablespoons of cremains, Engelbert says, and that’s the smallest amount she’s seen her dogs detect.

When Piper finds cremains, which can take as little as two minutes, she lays down near or on top of them, Engelbert says.

Next, volunteer archaeologists start clearing an area, isolating what the dogs signaled they found, brushing off layers of ash until cremains emerge. They are “unmistakable—kind of grainy, sometimes with small chunks of bones in them,” Engelbert says.

After a successful find, handlers reward the dogs. In Engelbert’s case, the prize takes the form of a rolled-up towel and a game of tug-of-war.

They can also receive positive reinforcement from homeowners whose loved ones’ cremains have been recovered.

The dogs “get all sorts of love… and it’s therapeutic just because they’re there,” Engelbert says. “They do therapy in addition to the recovery.”