Among Rohingya uprooted in Bangladesh, it’s the tragedy of one displaced group inadvertently displacing another.

Among Rohingya uprooted in Bangladesh, it’s the tragedy of one displaced group inadvertently displacing another.

For thousands of years, Asian elephants around the city of Cox’s Bazar, in southeastern Bangladesh, have walked the same forest paths over and over on their migration to and from Myanmar.

Between August and December 2017, 600,000 Rohingya Muslim refugees poured from Myanmar across the Bangladeshi border. Fleeing rape, murder, and what the United Nations has called “a textbook example of ethnic cleansing,” the refugees settled in camps that happen to be right on eight vital elephant migration corridors.

“There was no time to plan properly,” says Raquibul Amin, the Bangladesh representative for the International Union for Conservation of Nature (IUCN), the global authority on the conservation status of wildlife, who is based in Dhaka.

When elephants attempted to migrate in September of last year, they encountered a sea of people—the tragic irony of one displaced group inadvertently displacing another.

Elephants and people alike panicked. Elephants ran haphazardly, looking for an exit, while people desperately tried to seek cover and avoid being trampled. Some sought to scare off the elephants by throwing garbage at them, creating even more panic. Tragedy followed.

Many of Bangladesh’s critically endangered

Asian elephants migrate every year across the

Bangladesh–Myanmar border, from one forest

cleansing in Myanmar crossed into Bangladesh

and settled in the Kutupalong refugee camp—

situated right on top of a vital elephant mi-

gration path. When the elephants tried to

been killed by elephants, and 38 elephants re-

main trapped inthe forest next to the camps.

forest on both sides of the border for their

habitat. Although much of it is protected,

10,000 acres have already been cleared as the 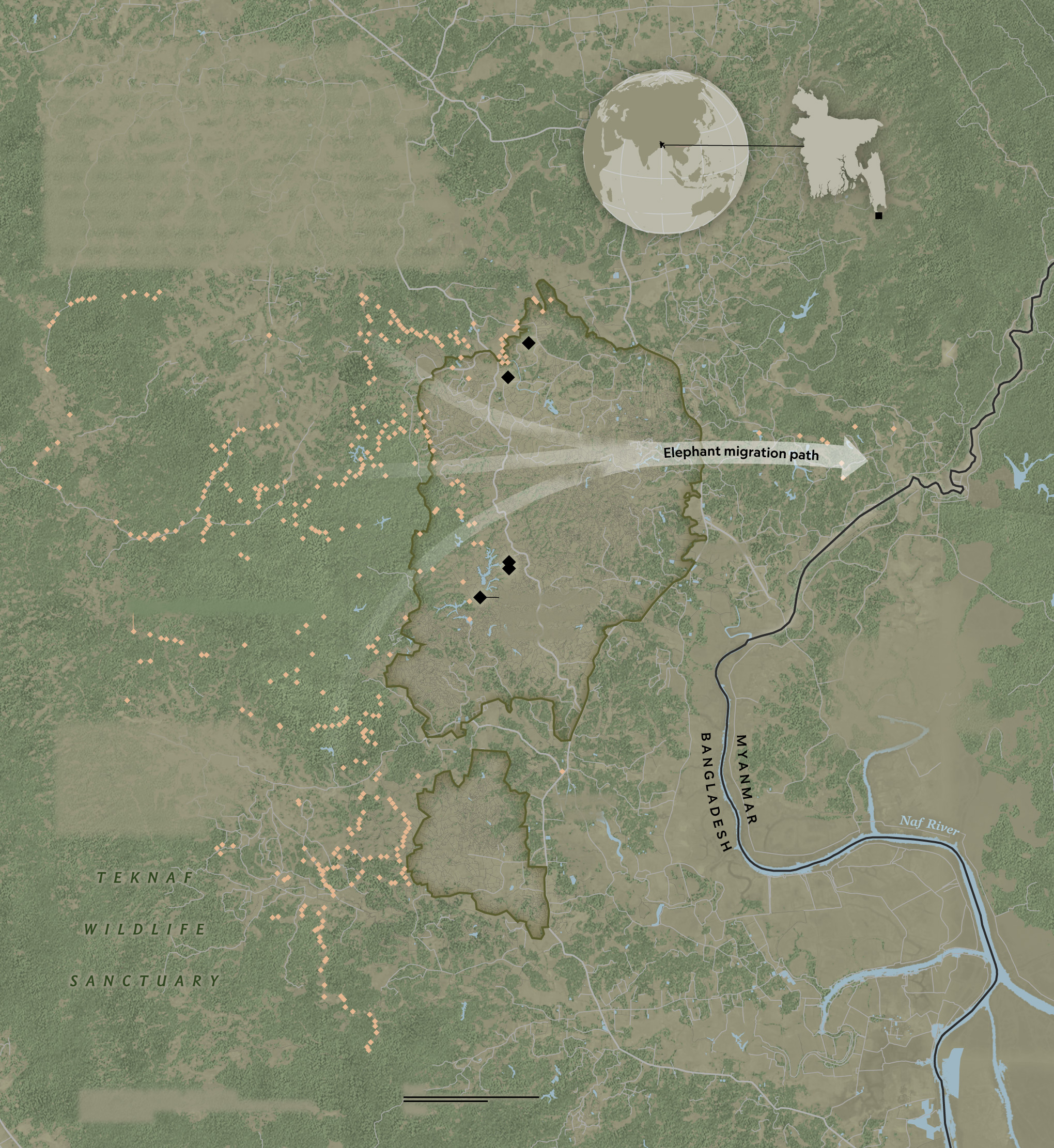 Many of Bangladesh’s critically endangered Asian

elephants migrate every year across the Bangladesh–

Myanmar border, from one forest habitat to another.

ladesh and settled in the Kutupalong refugee camp—

situated right on top of a vital elephant migration path.

When the elephants tried to migrate, disaster struck.

Thirteen people have been killed by elephants, and 38

elephants remain trapped in the forest next to the camps.

cleansing in their home

rely on dense forest on both

sides of the border for their

habitat. Although much of it is

already been cleared as the

When Amin arrived at the main camp, Kutupalong, in the middle of January, he found a woman weeping. “I found out that her husband was killed [by an elephant] that morning at 1 or 2 a.m.” The elephant had wandered 500 meters off a corridor’s former location in search of an escape, he says. “It shows how desperate the elephant was to find its way.”

In total, elephants killed 13 people between September 2017 and February 2018.

In March, the deaths stopped, in large part thanks to efforts by the IUCN and the office of the United Nations High Commissioner for Refugees (UNHCR). These organizations teamed up to teach people living on and around the corridors how to cope with future elephant encounters and how to better understand elephants themselves.

They’ve also established an elephant response team made up of 550 Rohingya refugees who live in close proximity to the corridors. They take turns manning 98 watchtowers around the camps, using noisemakers and flashing lights to turn away approaching elephants. The watchtowers are staffed 24 hours a day, and the watchers are paid for their time.

Since March, the program has successfully prevented 28 elephants from entering the camps.

The current approach is merely a temporary solution, says Ehsanul Hoque, an assistant environment officer for UNHCR Bangladesh, who works in the camp. “Still elephants are trying to come to the camp. There is a shortage of food, and migration is in their genes.”

The issues are twofold: not only are the migration paths filled with refugees and infrastructure, but as the camps grow, people are clearing more forest both for firewood and to make living space, further shrinking the elephants’ habitat. Some 38 elephants are now stranded in an ever-shrinking patch of forest adjacent to the main Kutupalong camp.

“The camp itself is shrinking the elephant habitat day by day,” says the IUCN’s Amin.

In the short term, it’s a safety and welfare issue for both elephants and humans. The stranded elephants risk running out of food. And although the task force has so far prevented further deaths, there is a real risk of more clashes between humans and elephants.

The long-term implications are more complex, says Mohammed Abdul Aziz, a professor of zoology at the University of Jahangirnagar in Bangladesh, who has been working with the IUCN to assess the situation. Without being able to migrate, he says, the elephants may inbreed, damaging the gene pool of this population. Aziz says it may lead the population to become locally extinct.

“If they remain in an isolated pocket,” agrees Amin, “it won’t happen tomorrow, or the day after tomorrow, but they will lose their genetic diversity.”

The problem is only exacerbated by the fact that Bangladesh’s elephant population is critically endangered, facing threats such as habitat loss and food shortages. The 38 elephants trapped in the forest are among just 268 wild elephants that remain in the entire country.

The goal: Reopen the path. That may sound straightforward, but the reality is a jaw-dropping logistical nightmare.

Amin’s IUCN team just completed a study that determined the minimum swath of land needed to re-establish a functional migration corridor. At minimum, it would have to be a third of a mile wide and 2.2 miles long.

That space is currently home to 100,000 people across 24,000 households, as well as an array of infrastructure, including visa offices and supply depots. And displacing all those people would mean clearing even more forest in order to house them.

Then there’s the fact that no one actually knows all that much about these particular elephants—how they live, when exactly they migrate, or even why.

Before anything else happens, says the UNHCR’s Hoque, the groups need to try to understand more about how these elephants live. UNHCR and the IUCN plan to work together with the Asian Elephant Specialist Group, an IUCN-affiliated global network of specialists focused on the study, monitoring, management, and conservation of Asian elephants, to outfit a few members of the elephant population with GPS collars so they can track their movements and learn more about their behaviors.

But even if everything goes according to plan—the GPS collar tracking is a success; the groups are able to somehow move 100,000 people and buildings and relocate them without decimating the remaining forest; and the elephants actually use the re-established corridor—the border between Bangladesh and Myanmar remains a problem.

To prevent the Rohingya people from returning to their homes, Myanmar has erected extensive border fencing and—even more ominous and certainly more invisible—landmines, according to media reports. Amin and his team have received reports that two elephants on the Myanmar side have already been killed by landmines. “It means that if we want to open the corridor, we need to start discussing with the Myanmar government to open the international border as well,” Amin says.

The elephants’ fate in part depends on the thawing of a geopolitical and humanitarian situation so deeply fraught, complex, and mired in tragedy that it will take tremendous government cooperation to overcome, Amin says. He and the UNHCR team are working on bringing people from both governments together to discuss options, but he is the first to admit that it will be a long road.

A BIT OF HOPE

In the meantime, Amin, Hoque, and others remain committed to doing what they can. In addition to the success seen with the elephant watch group, UNHCR has started giving cooking fuel to refugees, to prevent clearing more forest for firewood. By early next year, they aim to be supplying fuel to every single household in the camps.

And although the long-term risks remain grave and will take a tremendous amount of diplomacy, cooperation, and financial support to be resolved, Amin is proud of the work that all parties have done so far. He’s particularly proud of the elephant task force.

“The 550 Rohingya men who have been trained [for the task force] are quite confident the system is working,” he says. “They are a brotherhood.”

And through their efforts to protect both people and elephants, the task force has also inadvertently created another bright spot. They’ve become the collective animal protectors of the Cox’s Bazar refugee camps, reporting dozens of instances of illegal wild animal captures around the camps to the forestry department and teaching other refugees about animals’ well-being. They’ve saved a group of captive starlings, a pair of Asian leaf turtles being roughly treated by children, and an array of monkeys, pythons, and small mammals.

Ismail Ferdous is a documentary photographer covering social and humanitarian issues. His first story for National Geographic, " How South Asian Americans Are Building a New American Dream," appeared in the September 2018 issue of the magazine. You can follow him on Instagram.