About 80 Sumatran rhinos in Indonesia are all that remain of the species.

The Sumatran rhinoceros is now extinct in Malaysia. The country’s last rhino, Iman, died of cancer on Saturday, Malaysian officials reported. Tam, Malaysia’s last male rhino, died in May. The species is down to about 80 individuals, all living in Indonesia.

“Iman was given the very best care and attention since her capture in March 2014 right up to the moment she passed. No one could have done more,” said Christine Liew, Sabah State’s Minister of Tourism, Culture and Environment.

Tam was discovered poking around an oil palm plantation in 2008. He was captured and transferred to the Tabin Wildlife Reserve in the state of Sabah. Efforts to breed him with two female rhinos—Puntung, captured in 2011, and Iman, captured in 2014—proved unsuccessful.

The number of Sumatran rhinos has dropped

an estimated 70 percent in the past two

decades, mostly due to poaching. Fewer than

a hundred remain in Indonesia, in isolated

They’re small compared with other rhino

species, and females give birth about every

potential to reproduce is diminished, putting it

at a higher risk for extinction.

sightings are rare and population figures are

Rhinos have been seen in the Kutai Barat and Mahakam Ulu Regencies, with other rumored sightings by locals. 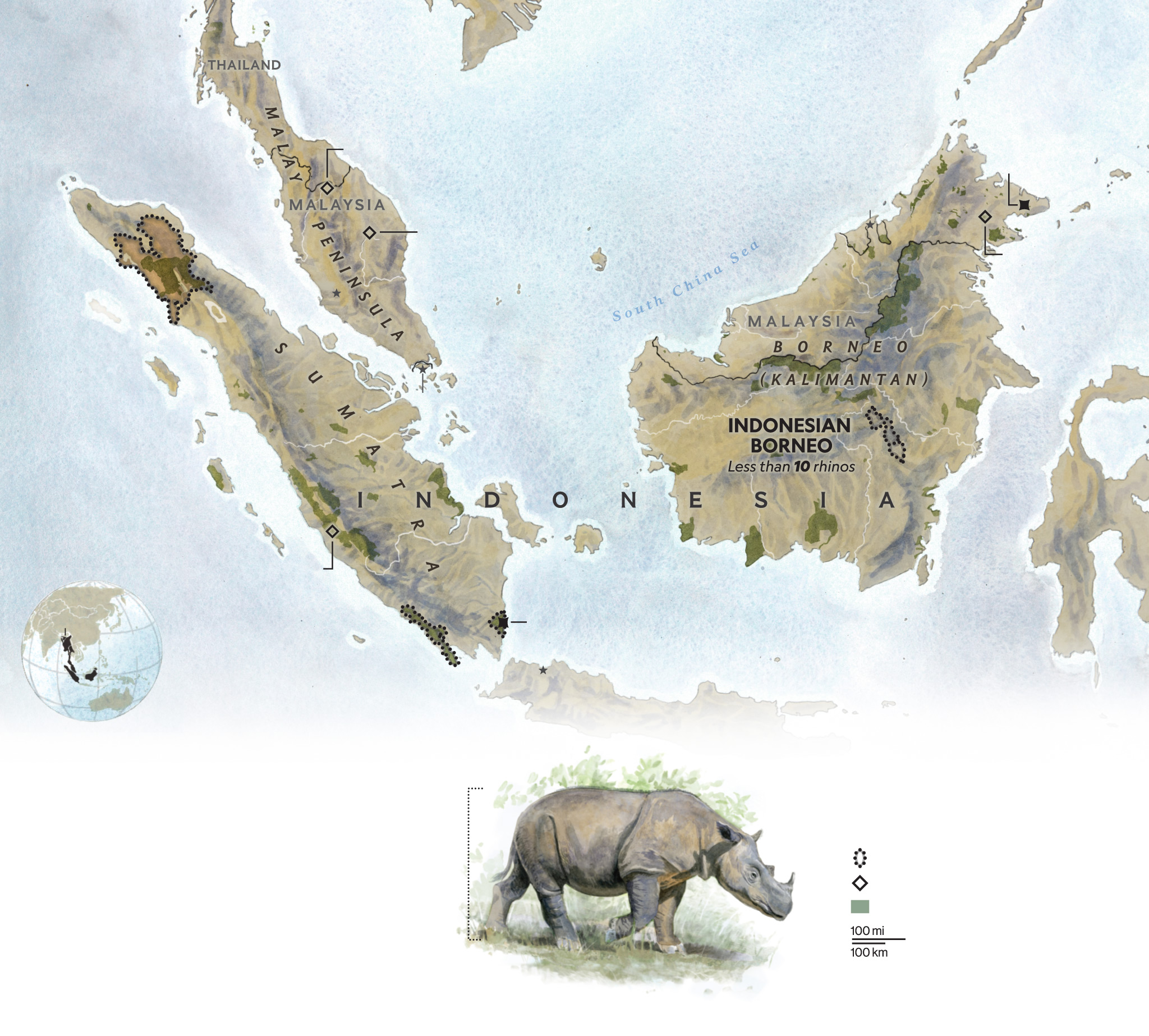 Sumatran rhinos live in remote areas, so sightings are rare and population figures are often disputed. Camera traps are the primary source of documentation.

Small populations mean the Sumatran rhino’s potential to reproduce is diminished, putting it at a higher risk for extinction.

The number of Sumatran rhinos has dropped an estimated 70 percent in the past two decades, mostly due to poaching. Fewer than a hundred remain in Indonesia, in isolated pockets. Sumatran rhinos are solitary creatures. They’re small compared with other rhino species, and females give birth about every three to five years.

The last female in Malaysia, at Tabin Wildlife Reserve, in northeast Borneo, died on November 23, 2019.

Puntung was euthanized in 2017 due to cancer. Because of decades of habitat loss and poaching, fewer than 80 Sumatran rhinos are thought to exist in the wild, most on the nearby island of Sumatra. The rest are scattered across Kalimantan in Indonesian Borneo.

Sumatran rhinos are so few, in fact, experts now believe isolation is the single biggest threat to the species’ continued existence. This is because females of this species can develop cysts and fibroids in their reproductive tracts if they go too long without mating. (Such was the cause of Iman’s infertility. Puntung's inability to carry fetuses seemed to stem from injuries sustained from a poacher’s snare and a failed pregnancy in the wild.)

That's why, in 2018, the world’s leading conservation nonprofits, including the National Geographic Society, announced an unprecedented collaboration called the Sumatran Rhino Rescue. The aim? To find and safely capture as many wild rhinos as possible so that they can be brought together for captive breeding. (Read: “The Unprecedented Plan to Save the Sumatran Rhino.")

“Tam's death underscores how critically important the collaborative efforts driving the Sumatran Rhino Rescue project are,” Margaret Kinnaird, wildlife practice leader for WWF International, said in an email in May.

“We've got to capture those remaining, isolated rhinos in Kalimantan and Sumatra and do our best to encourage them to make babies.”

Tam’s condition had been steadily declining since late April, when his appetite and alertness declined, Sabah Wildlife Department director Augustine Tuuga told Malaysian newspaper The Star after Tam's death Urine tests revealed that the rhino’s kidneys and perhaps other organs had begun to fail.

Authorities haven’t said why Tam deteriorated so quickly, but it may simply have been old age. Tam was estimated to have been in his thirties, and these animals only have a life expectancy of 35 to 40 years, Tuuga told the Singapore newspaper The Straits Times.

“We hung so much hope on Tam to produce offspring in captivity, but that hope was dashed when the remaining two females at Tabin were unable to carry fetuses,” Kinnaird said.

While Tam wasn’t able to produce any offspring on his own, his presence in captivity did help us better understand his kind.

“The work that the Borneo Rhino Alliance did with advanced reproductive techniques, especially harvesting eggs and attempting to create embryos, took us one step further towards understanding of the species’ biology,” said Susie Ellis, executive director of the International Rhino Foundation.

“The public needs to understand how precarious the survival of Sumatran rhinos is,” Ellis said. “Tam’s loss represents roughly one percent of the population.” (Learn about a Sumatran rhino caught in 2016 in Kalimantan.)

As tragic as Tam’s death is, it's a wakeup call to find more animals in the wild, says Kinnaird, who has been coordinating WWF International’s Sumatran rhino efforts for the last two years. (WWF is also part of the Sumatran Rhino Rescue coalition.)

The good news is that late last year the coalition had already succeeded in capturing a new female, named Pahu. Her transfer to a new breeding facility in Kelian was so important, the rhino was afforded an escort from both police and mudslide-clearing bulldozers. (Read: “First wild Sumatran rhino captured in urgent bid to save species.")

So far as experts can tell, Pahu does seem to be reproductively healthy, says Kinnaird; she is thriving in her new home, and, with any luck, she may soon have company.

“Our most recent surveys indicate there are other rhinos still roaming in Kalimantan's forests," Kinnaird says, "which gives me renewed hope."

“We need to continue to be laser-focused on saving the remaining 80 Sumatran rhinos, using a combination of intensive protection and captive breeding, and working with local people to instill pride that the rhino is part of their biological heritage,” says Ellis. “This is a battle we cannot afford to lose."

Editor's note: This story was originally published May 27, 2019, after the death of Malaysia's last male Sumatran rhino. It has been updated following the death of the last female.