Newly published aerial surveys—out just weeks after the country lifted its hunting ban—indicate that poaching is on the rise in Botswana.

Botswana—widely considered a safe haven for elephants in Africa—appears to be suffering from its own surge in poaching, according to aerial survey work published today in the journal Current Biology.

“We have a significant poaching problem—let’s deal with it,” says Mike Chase, who, as the director of the Botswana-based nonprofit Elephants Without Borders, led the latest aerial survey study as well as earlier elephant counts, including the 18-country Great Elephant Census. “We were warned by conservationists in other countries that the poachers would eventually come down to Botswana, and now they’re here,” he says.

Botswana is estimated to be home to more than 130,000 savanna elephants—about a third of Africa’s remaining population. Until recently, the southern African country had largely escaped the scourge of elephant killings for ivory, still in high demand in China and elsewhere. (Read about how elephants fleeing poaching hotspots went to Botswana.)

In Chase’s 2014 survey work, his team saw no incidents of suspected elephant poaching in Botswana. But in 2018, across five areas, they counted 156 fresh or recent carcasses whose skulls had been cut open and the tusks removed. Many of the carcasses were hidden under bushes, suggesting, Chase says, that those animals were victims of the illegal ivory trade.

Number of fresh elephant carcasses (dead less than one year) 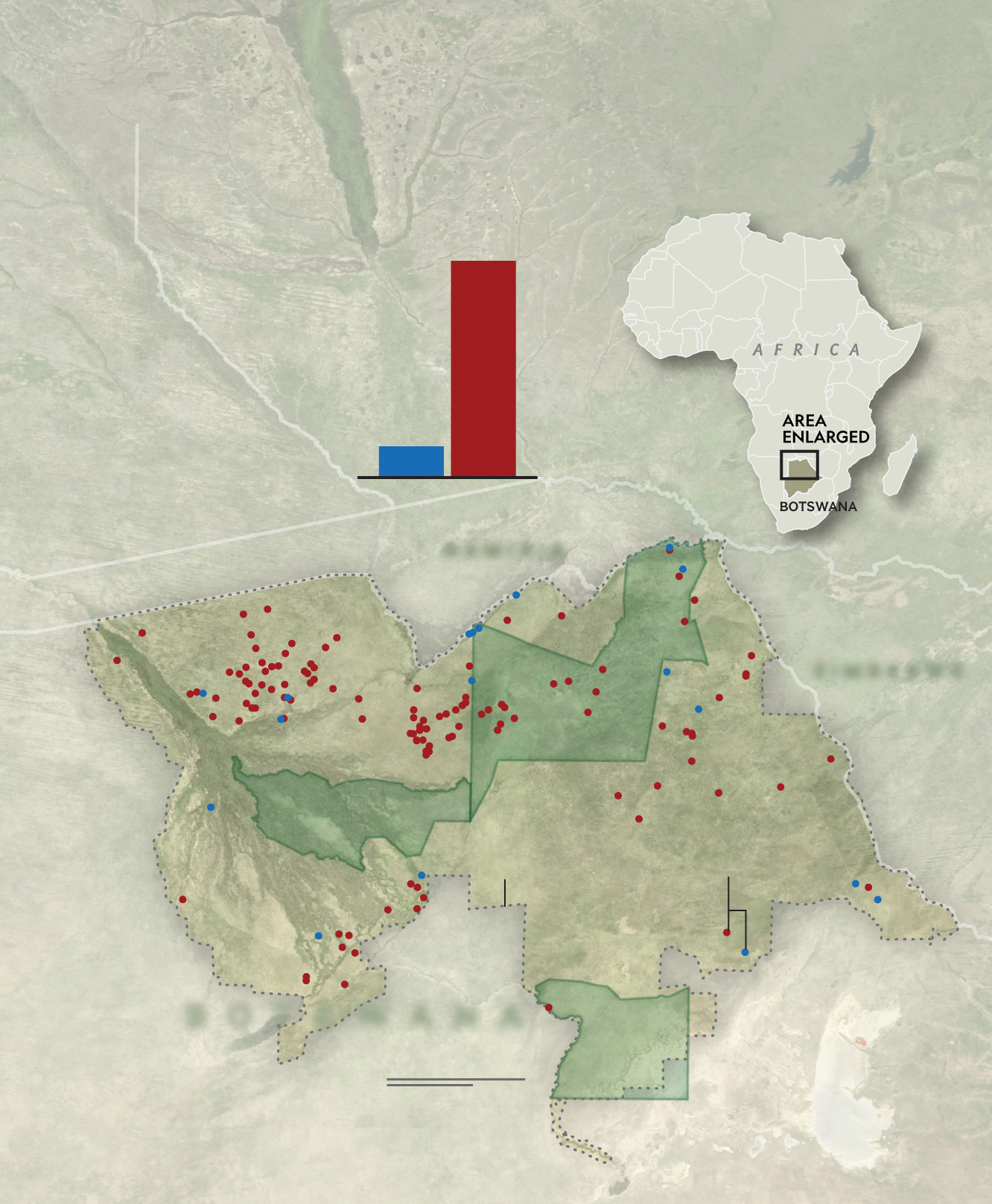 Rise in elephant poaching in Botswana

(dead less than one year) 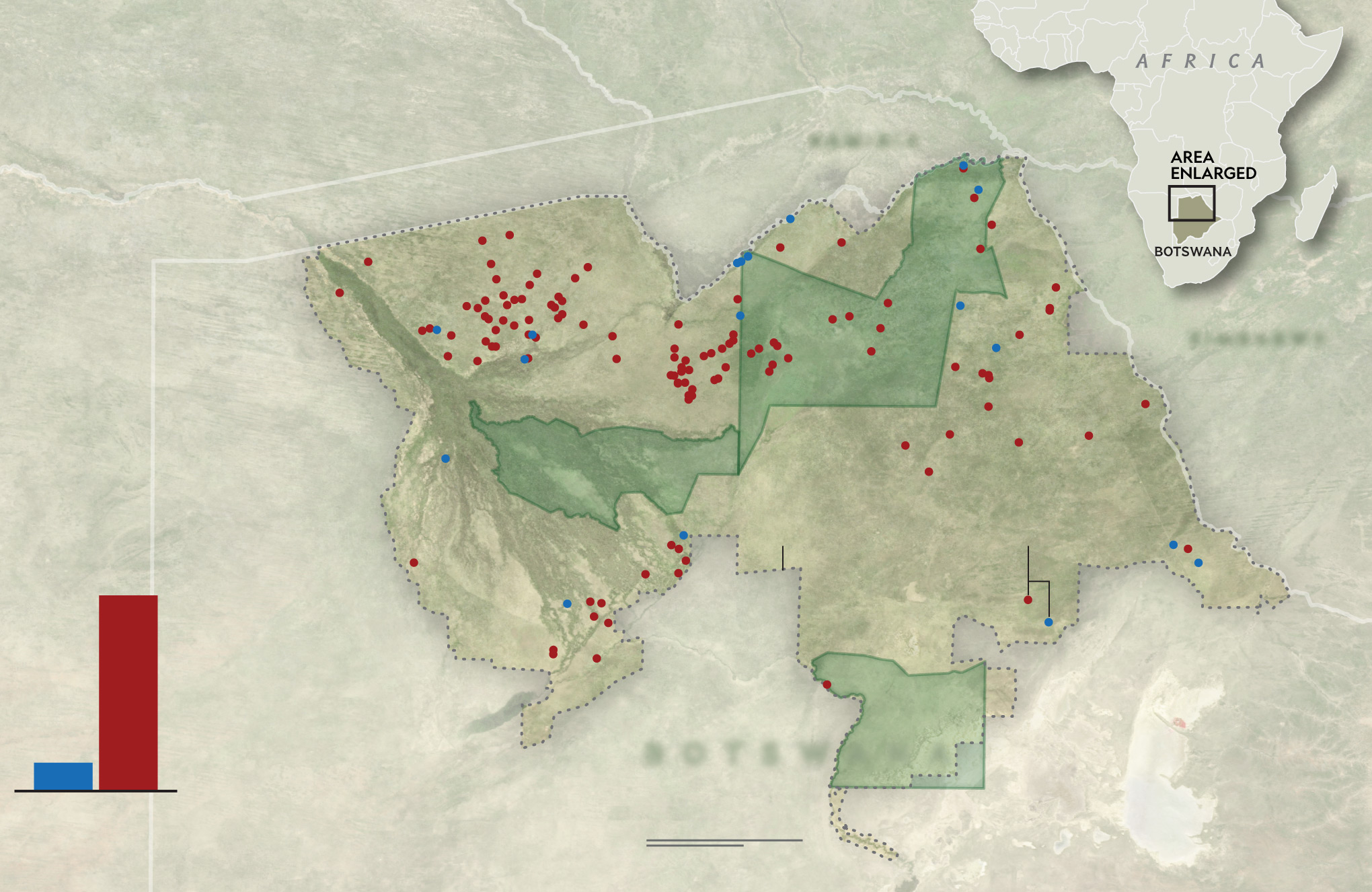 Rise in elephant poaching in Botswana

(dead less than one year)

Elephants Without Borders estimates that country-wide at least 385 elephants were poached from 2017 through early October 2018—a spike that may portend future population declines. This, Chase says, should be seen as a call to action.

The African Wildlife Foundation, an international conservation nonprofit, estimates that as many as 35,000 elephants are killed each year in Africa. Zambia’s Sioma Ngwezi National Park, for example, had about 900 elephants in 2004 but only an estimated 48 just over a decade later—losses likely driven by ivory poaching. And in the Ruaha-Rungwa region of south-central Tanzania, the elephant population is estimated to have fallen from more than 34,000 in 2009 to 8,000 by 2014.

The Botswana count in Current Biology appears on the heels of last month’s announcement by the government that it will lift its five-year-old hunting ban on all species—a controversial move that will allow renewed trophy hunts of elephants and other animals. Such hunts, the government said, are needed because dangerous encounters between people and elephants have been increasing and may threaten livelihoods, among other reasons.

The paper follows an earlier iteration of the findings in a 2018 report by Elephants Without Borders. That work—reviewed by other scientists and funded and released independently—had been dismissed by the Botswana government and some scientists as an overestimation of the poaching problem.

“Our main conclusion remains the same [as last year’s report], but we decided the best thing to do was take all of our results, make sure we had done everything correctly, and put it together in a paper that went through the journal’s formal peer-review process—which is about as good as you can get in the scientific world,” says Scott Schlossberg, an Elephants Without Borders ecologist who led the analysis. The hope, he says, is that people will now be convinced about the scale of this problem.

Botswana’s Ministry of Environment, Natural Resources Conservation and Tourism did not respond to requests for comment about elephant poaching in the country.

To conduct the counts, Chase flew in a small, single-engine plane, sitting alongside the pilot and recording carcass sightings. Two observers sat in the back doing their own counts—one of whom was almost always a Botswana government employee, according to Elephants Without Borders. They followed up with helicopter and photo inspections of some carcasses.

Whether or not Botswana’s hunting ban helped deter poachers or, as some assert, led to unchecked elephant numbers—perhaps making villagers feel justified in killing elephants that damaged their crops and then taking their tusks—remains unclear, says crime and security expert Vanda Felbab-Brown of the Brookings Institution, a think tank in Washington, D.C. Felbab-Brown considers the findings in Current Biology “credible” and “strengthened” from a year ago. “This work looks solid,” she says.

Gaseitsiwe Masunga, an ecologist at the University of Botswana’s Okavango Research Institute and a former chief wildlife officer for Botswana’s Department of Wildlife and National Parks, also accepts the findings. “I think the extrapolations here are reasonable,” he says, adding, “I think it is accurate and correct that the number of poaching incidents is increasing.” Moreover, Masunga says, earlier ground-based surveys indicated that poaching numbers were on the rise, and aerial work allows for even greater perspective.

But Goemeone Mogomotsi, a senior research fellow at the Okavango Research Institute, wrote in an email that he’s skeptical about the Elephants Without Borders methodology and numbers. Many of the de-tusked elephant carcasses, he says, may have been animals that died from natural causes and then were de-tusked by government employees—a relatively common practice. “That is done on a regular basis when elephants die, and their carcasses are identified by anti-poaching units,” he says. “To take out those tusks, a similar process of hacking the skulls is likely carried out.”

Publishing the new findings in a peer-reviewed journal is also about vindication, Chase says. “To have your scientific reputation called into question is soul-destroying. I’m hoping this paper will in some way restore my reputation as a well-known elephant conservationist and, more importantly, help with the plight of elephants in our country and restore our legacy of being a safe haven for the world’s largest elephant population."

In addition to exhaustively cross-checking their earlier work, Schlossberg, Chase, and co-author Robert Sutcliffe added one new element. To test for other possible causes of elephant deaths, they studied the regions immediately surrounding the five poaching hot spots to ascertain whether they differed from the hot spots in terms of available food for elephants, drought conditions, elephant densities, and numbers of people.

What they found was that the non-poached areas generally had poorer food supplies and less water. Elephant densities were roughly comparable, and there were more people in the areas outside the poaching hot spots. They concluded that these factors don’t explain the deaths of the elephants and that poaching is the more likely cause.

Overall, the team estimated that between 2014 and 2018 the number of elephant carcasses in Botswana increased by 593 percent. Some of the increase may have been from natural causes, including a country-wide drought a few years ago, Schlossberg says. Elephant numbers stayed roughly stable from 2014 to 2018. But that in itself is problematic, he explains, because elephant populations are expected to increase a few percentage points every year, unless something keeps those numbers in check, such as drought or disease—or poaching.

“We don’t want to say poaching has caused the population to stop growing—we don’t have enough evidence to claim that—but it is worrisome when an elephant population is not growing,” he says.

The carcass evidence suggests that poachers in Botswana have concentrated on tuskers, the older bulls most likely to have the largest tusks. Once those elephants are gone, poachers turn to the matriarchs. At that point, Schlossberg says, elephant populations are especially vulnerable because the older females are the repositories of the herd’s collective wisdom. The matriarchs are the ones who know where to find water and food. (Learn more about ivory poaching trends: Under poaching pressure, elephants are evolving to lose their tusks.)

“It has become easy to believe that Botswana was always going to be safe for elephants, even if it was going really badly for elephants in other countries around Botswana,” Schlossberg says. “But now we know that it is not.”

Chase says that to protect Botswana’s elephants, “we cannot expect government to deal with these complex challenges on their own.” Some poaching hot spots are in concessions leased to large international tourism or safari companies, and they should ramp up their own anti-poaching efforts. Chase points to two concessions in the Okavango Delta that have anti-poaching patrols—in those highly monitored areas, Elephants Without Borders found no elephants that had been killed for their ivory.