The subspecies in Kenya and Tanzania has declined by nearly 50 percent in the last 30 years, largely because of poaching and changes in land use.

Scientists have declared a subspecies of giraffe endangered.

The International Union for Conservation of Nature (IUCN), the global authority on the conservation status of wild animals and plants, announced Thursday that Masai giraffes, a subspecies spread throughout Kenya and Tanzania, are now endangered, primarily because of poaching and changes in land use. 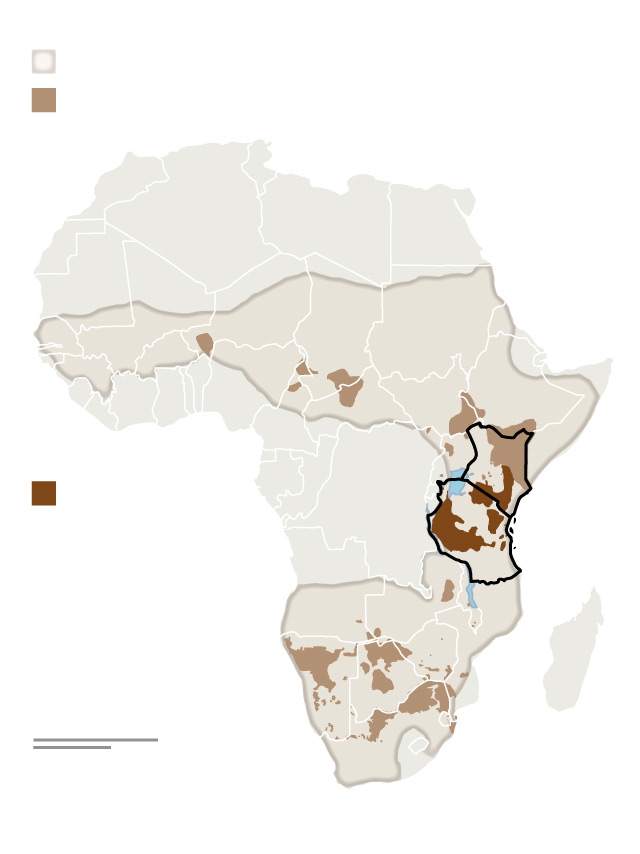 Range of the giraffe (Giraffa camelopardis)

Masai giraffes are iconic, says Tanya Sanerib, international legal director for the Center for Biological Diversity. Given that they’re one of the largest subspecies of giraffes, they’re the “quintessential” animal you likely think of when you think giraffes. For this subspecies to be declared endangered is a wake-up call, Sanerib says.

“This was devastating news...It really sounds the alarm bell,” she says. “It really indicates that we need to be doing more for giraffes internationally and with whatever tools are available.”

This is the first time the Masai subspecies (Giraffa camelopardalis ssp. tippelskirchi) was assessed on its own—previously, it was included as part of the IUCN Red List’s general giraffe listing (Giraffa camelopardalis), which considers giraffes “vulnerable,” a step further away from extinction than “endangered.” Of the nine subspecies of giraffes, Masai and reticulated giraffes are endangered, and Nubian and Kordofan giraffes are critically endangered.

Hunting giraffes is illegal in both Kenya and Tanzania, but they are poached for their hide, meat, bones, and tails. An estimated 2 to 10 percent of the population is hunted illegally every year in Serengeti National Park in Tanzania, according to the IUCN. Poaching has increased because of civil unrest and emerging markets for giraffe parts, including tail-hair jewelry and bone carvings. There’s even a belief among some that giraffe bone marrow and brains can cure HIV and AIDS, Tanzanian media have reported. (Learn more about how giraffes in central Africa are being poached for their tails.)

Giraffe deaths have also increased because human populations have grown and expanded into what used to be wildlands, leading to increased incidents of crop damage and vehicle strikes. Hunting for bushmeat is also a threat.

Giraffes historically have been understudied compared to other threatened species. While thousands of scientific papers have been written on white rhinos, only about 400 cover giraffes, according to giraffe researcher Axel Janke. There are fewer giraffes than elephants left in Africa.

“They’re the forgotten megafauna, so to speak,” says Julian Fennessy, co-director and co-founder of the nonprofit Giraffe Conservation Foundation. “They’ve sort of slipped away, sadly, while more attention has been given to elephant, rhino, lion, and other species.” (See more photos of how scientists are working to save giraffes.)

We have so much to learn about giraffes, Sanerib says, it would be a shame to lose them. For example, they have complex circulatory systems that could have implications for understanding human’s high blood pressure. Researchers have also found that they hum at night, and they have no idea why.

“We have this species that’s going extinct, and we have these phenomenal, really fascinating things about them that we don’t know the answers to,” she says enthusiastically.

Although for years there’s been a consensus that there’s one species of giraffe with nine subspecies, evidence of genetic differences has emerged in recent years, suggesting that there are actually four species of giraffe and that the Masai is its own species. Though Masai giraffes aren’t widely recognized as a unique species, Fennessy says categorizing them as their own could reap more conservation benefits. For example, the United States’ Endangered Species Act grants protections to animals at the species level, which means giraffes are not considered endangered by U.S. standards, even though several subspecies clearly are.

But overall, Fennessy says this new assessment shines a light on the plight of these animals.

“By identifying that they are endangered, hopefully now collaboratively with governments and partners, we can turn the tide before it’s too late,” Fennessy says.