Raccoons are spreading across Earth—and climate change could help

The voracious invaders are found on three continents, and warming could help their range expand northward.

Much of the world is hospitable for raccoons, and the potential range of these masked invaders is set to expand into new areas with climate change, according to new research.

A study published in Scientific Reports looked at what climatic conditions are most suitable for these native North American mammals, in areas where they are currently found. The scientists then extrapolated across the globe to find where environment variables were likely to support populations of the animals—and how that will change with global warming.

The scientists found favorable climatic conditions for the adaptable, voracious omnivores in much of the world, in a zone that is expected to expand considerably to the north, says Vivien Louppe, study lead author and a researcher at the French National Museum of Natural History in Paris.

RISE OF THE RACCOON

Raccoons were introduced to the Caribbean islands as early as 1650. Island ecosystems are especially vulnerable to invasive carnivores such as raccoons.

Brought to Germany for their fur in the 1930s, raccoons have since proliferated across much of Europe.

Raccoons have been reported in Iran and Azerbaijan since 1991.

SOURCE: VIVIEN Louppe AND OTHERS, 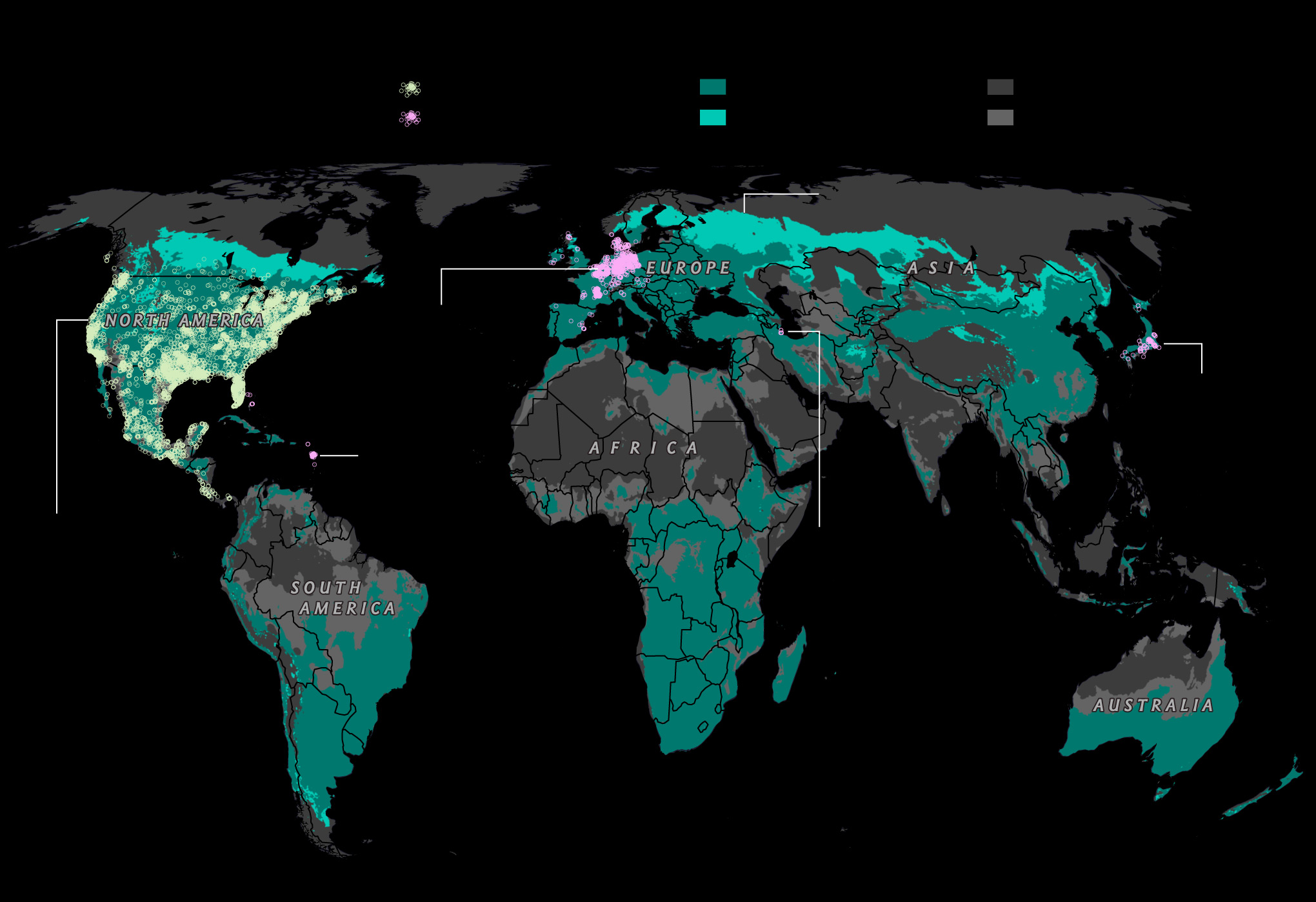 Brought to Germany for their fur in the 1930s, raccoons have since proliferated across much of Europe.

arrived in the 1960s. Island ecosystems are especially vulnerable to invasive carnivores such as raccoons.

Raccoons were introduced to the Caribbean islands as early as 1650.

Raccoons are native to North America. As the climate warms, their range could expand northward into Canada.

Raccoons have been reported in Iran and Azerbaijan since 1991.

This will only further assist the dispersal of these animals, which are already spreading as introduced species throughout much of Europe, as well as Central and East Asia. Raccoons can outcompete native species and eat massive quantities of prey, causing significant but little-studied environmental damage in these areas.

“The species is able to cope with a high diversity of environmental and bioclimatic conditions,” Louppe says—everything from Caribbean mangroves to European temperate forests to the cold and snowy American North Woods. The climatic conditions modeled included variables having to do with heat and moisture, such as average yearly temperature, annual precipitation, and daily temperature range.

Raccoons (Procyon lotor) are best suited to riverine environments. Their scientific name translates to “before the dog,” and “washer” in Latin, referencing their habit of catching and washing food in rivers and water bodies. The name for them in German, Italian, and Japanese all roughly translate to “washing bear.”

First introduced into Germany in the 1930s, raccoons have dispersed to every surrounding country, west to Spain, south to Italy, and east to Poland. In Japan, they’ve been bounding their way through the islands of the country since the 1960s, and are found in at least 42 of the country’s 47 prefectures. There is another major population in Iran and Azerbaijan.

Part of the reason the mammals became a problem in Japan is due to a book and ensuing cartoon series called “Rascal,” featuring a cute raccoon, which became a hit in Japan in the 1970s. That spurred the importation of up to 1,500 animals per month for a time, though the country later banned the practice. But it was too late: Raccoons make terrible pets, and many of the animals were released into the wild.

To create the model, the scientists looked at several future trajectories of carbon dioxide emissions and how each scenario would contribute to warming temperatures around the globe.

Though the team saw similar increases in favorable conditions for raccoons with several trajectories, the team settled on the most extreme case—mainly because the expansion was more pronounced. Called RCP 8.5 (for Representative Concentration Pathway), this represents the “worst-case scenario”—albeit one we could be on a path toward—and involves robust petroleum use into the future.

“RCP 8.5 is the most extreme case but also, unfortunately, the most realistic and probable,” Louppe says.

The most concerning thing about the raccoons’ potential northward spread is the impact on northern woodlands, known as boreal forests, Louppe adds.

“The ecosystems in these areas are peculiar and fragile,” he says, and could suffer from the introduction of a new predator.

This is particularly relevant to the northern forests of Europe and Asia, where raccoons could expand much further, says Suzanne MacDonald, a professor at York University in Toronto who studies animal behavior and wasn’t involved in the paper.

Raccoons can “completely upend whatever delicate balance is already there,” says MacDonald, a National Geographic Society explorer. “And they’re already finding that, in places like Japan.”

Though little is known about the animal’s ecological impact in Europe, “raccoons might seriously threaten native fauna,” says Agnieszka Perec-Matysiak, a researcher at Poland’s University of Wrocław.

The creatures are particularly well suited to cities, where they happily subsist on trash (hence their popular nickname, trash pandas).

“Every night in Toronto, you’ll see raccoons in your backyard,” MacDonald says, by way of example. “Not some nights, but every night.” She especially worries about their potential to spread disease, such as rabies. “I lose sleep over these things.”

The modeling in the study didn’t include some ecological variables, like the presence of prey and predators, so it’s not a definitive demonstration of where they could live, Louppe cautions.

That being said, since raccoons eat just about everything, there’s a good chance they could survive in much of these climatically favorable places.

Meanwhile, raccoons continue to spread through non-native areas, eliciting less alarm than they probably should. “They are cute,” Macdonald says, “but they are insidious.”

“People don't know what they’ve done by importing them,” she adds. “They are going to decimate anything in other countries that’s not prepared for them.”