As wolverines battle to survive, warming poses a new threat

By the end of the century, the small, fierce carnivores of the north could lose most of their habitat south of Canada because of climate change.

WITH ASSISTANCE FROM SWAN VALLEY CONNECTIONS
Read Caption
All senses on alert, a wolverine in Montana’s Swan Valley triggers a camera trap while feeding on a deer carcass. These secretive predators are built for survival in frozen northern landscapes. Can they adapt to a warming world?
WITH ASSISTANCE FROM SWAN VALLEY CONNECTIONS

As wolverines battle to survive, warming poses a new threat

By the end of the century, the small, fierce carnivores of the north could lose most of their habitat south of Canada because of climate change.

This story appears in the August 2019 issue of National Geographic magazine.

One night years ago, biologist Albert Manville drove to a garbage dump near Lake Louise in Alberta’s Banff National Park.

The site was unfenced back then, and grizzlies often came to rummage for leftovers. Manville was watching a bear feast on a hefty scrap of meat when he noticed movement toward the edge of his car’s beaming headlights. It was a wolverine, staring intently at the bear and the meat. What else could it do? It weighed maybe 30 pounds; the grizzly weighed several hundred.

“Then all at once the wolverine ran up and bit the bear right on the butt,” Manville says. “The grizzly whirled and swiped with a paw, but the wolverine was already racing around to one side. It grabbed the meat and ran off into the dark.”

A wolverine doesn’t seem like a reasonable beast, for it acts too tough and brazen for its size. But at barely three feet long from keen nose to bushy tail, an average wolverine will claim a territory of 100 to more than 500 square miles, then patrol it at an unrelenting pace, sniffing, probing, hunting, scavenging, and defending its home from rivals. (Watch the elusive wolverine snack on a deer in this rare video.)

In the five years that I volunteered with a groundbreaking study in Montana’s Glacier National Park, I tracked one radio-tagged male as he climbed 1,500 feet straight up an ice-packed chute on a sheer mountainside and crossed the Continental Divide. The ascent took him less than 20 minutes.

Another male scaled the park’s highest summit—10,466-foot-high Mount Cleveland—in January, when the peak was a towering ice sculpture. He covered the last 4,900 feet in 90 minutes. Within the next 10 days he climbed other crests to the west, turned north into British Columbia, loped east across the divide and on through Waterton Lakes National Park in Alberta, and returned south across more massifs to get back to Glacier. No big deal. Within a day or two he took off and made the journey all over again.

Skunk bear. Mountain devil. Demon of the North. For centuries wolverines were defined not only as greedy, god-awful smelling, and eerily wily and elusive but also as foul-tempered, wantonly destructive, and a danger to people in the backcountry. But none of these characterizations fit.

Gulo gulo (from the Latin word for “glutton”) is native to Arctic, subarctic, and mountain regions of the Northern Hemisphere. The species is part of the large and varied mustelid family, many of which have revved-up metabolisms. The group includes martens, weasels, badgers, honey badgers, otters, and sea otters. Of the group’s nonaquatic members, the wolverine has the heaviest skull, thickest jaws, biggest teeth, largest body, and largest feet. A single gulo can bring down prey as large as an adult caribou, and unverified reports describe wolverines occasionally forcing wolves and even big bears away from a carcass.

The last thing a wolverine is, so it would seem, is vulnerable. But trappers, hunters, and livestock owners erased the animal from much of Eurasia. In the New World, government-sponsored predator eradication campaigns took a heavy toll. By the 1930s the species had disappeared from the lower 48 states. 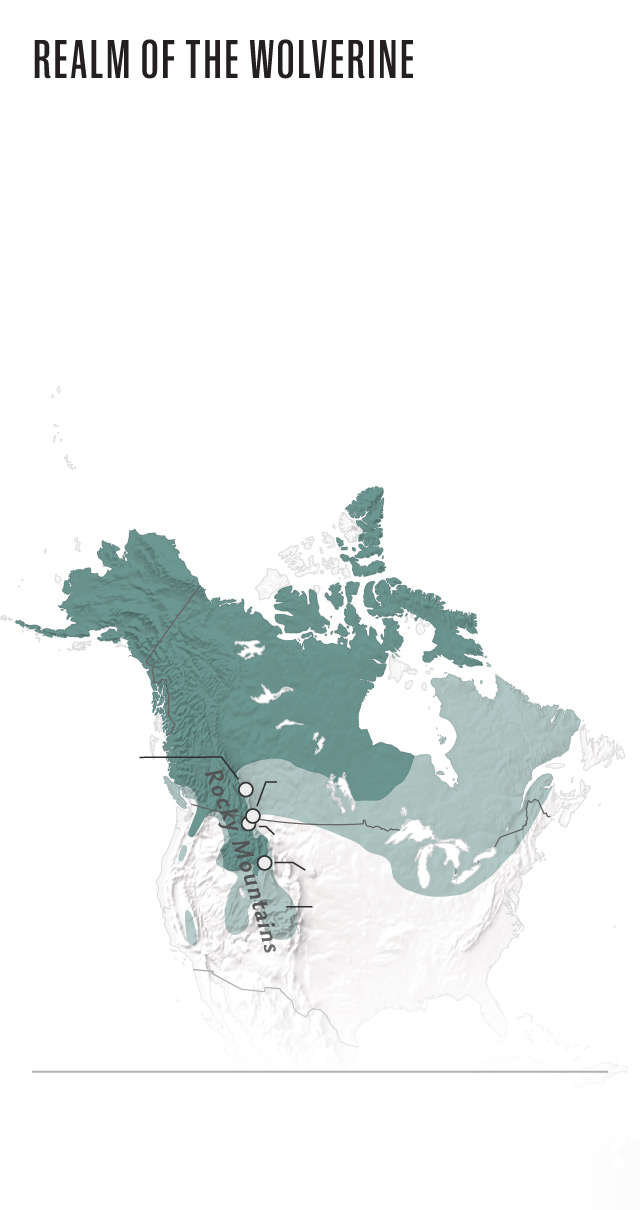 Trapping and human settlement have shrunk wolverines’ historic range. Dependent on vast home territories, they are scarce even in remote northern forests and tundra regions, their primary habitat. 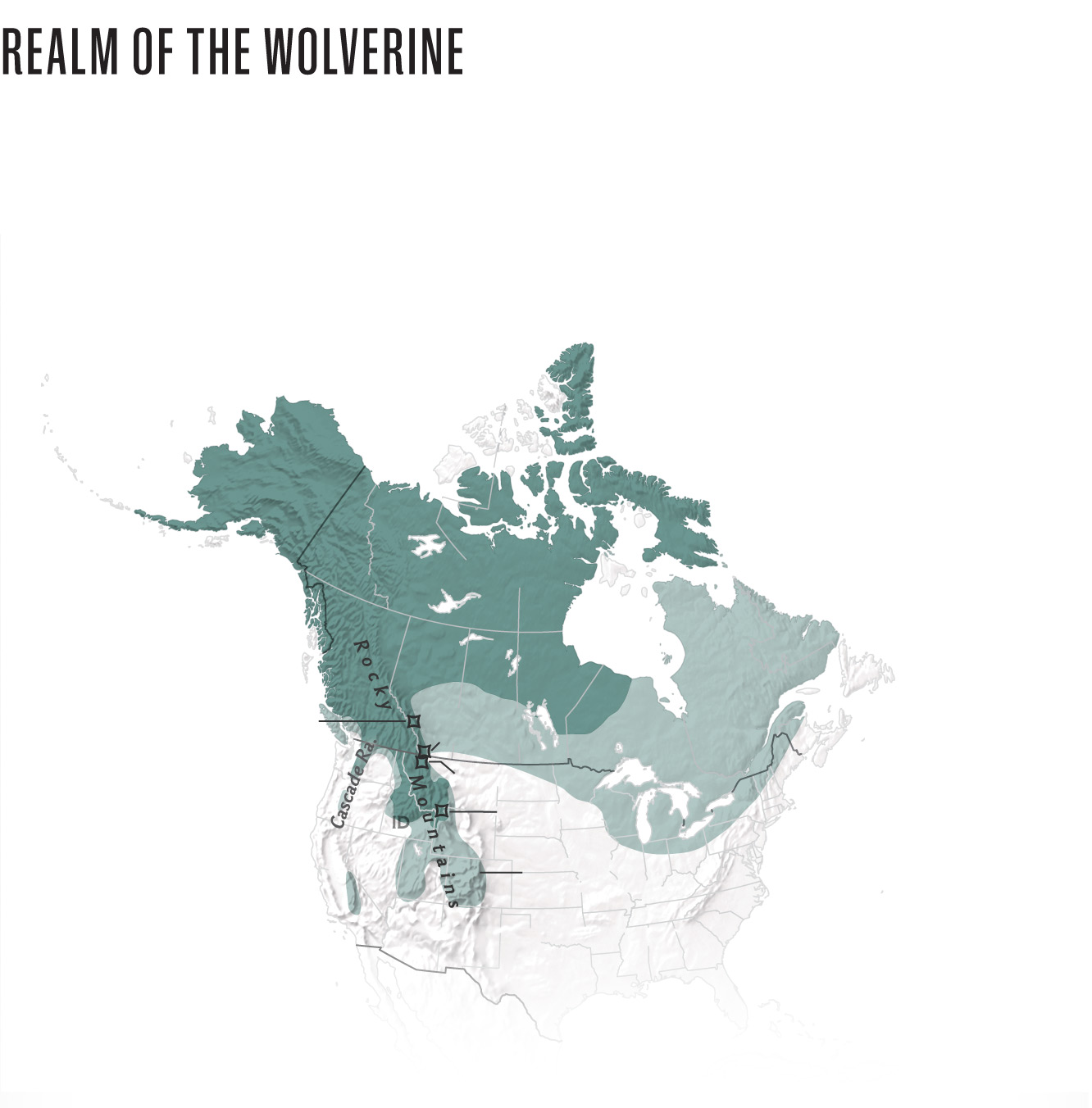 Trapping and human settlement have shrunk wolverines’ historic range. Dependent on vast home territories, they are scarce even in remote northern forests and tundra regions, their primary habitat.

Yet wolverines are tenacious survivors that still have strongholds in Alaska and parts of western Canada. As predator poisoning was phased out during the 1960s, wolverines from the Canadian Rockies started to recolonize Montana’s high country and spread to parts of Idaho and northern Wyoming.

Then, in the 1990s, wolverines from Canada began venturing into Washington’s northern Cascades. Today breeding groups live in four states: Montana, Idaho, Wyoming, and Washington, but the population remains small. A recent estimate put the number of wolverines south of Canada at around 300 animals.

Meanwhile, populations on both sides of the U.S.-Canada border face a variety of threats. Most come from expanding human activities in the backcountry, but one concern overrides all others: a warming climate. Gulo gulo is specially adapted to, and highly dependent on, habitats with year-round cool conditions and lingering snowpack. Although polar regions are heating up faster than other latitudes, similar temperature increases are happening in the planet’s high altitudes, such as the Rockies. If climate change continues as predicted, wolverines could lose one-third of their present range south of Canada by 2050, and two-thirds before the end of this century.

Since 1994, despite petitions and lawsuits seeking to protect wolverines under the Endangered Species Act, the U.S. Fish and Wildlife Service has resisted listing wolverines as threatened. In 2016, citing the growing threat of climate change, a federal judge ordered the agency to reconsider its decision. That’s where the matter stands today: in limbo.

Glacier National Park is home to the densest populations of wolverines in the contiguous U.S. But because each wolverine jealously guards a huge territory, a total of 30 to 40 is about all that will ever fit into the 1,500-square-mile park. Fact is, no single preserve holds a wolverine population large enough to be truly self-sustaining. To cope with environmental changes and avoid inbreeding over the long run, every group needs to be connected to others within a larger region.

Biologists used to say that the best plan to conserve wildlife is to set aside parks and preserves. Now they say we must also safeguard natural corridors that link protected areas, ensuring that species such as wolverines can travel across large landscapes, exchange genes, and adjust to shifting conditions. Wolverines aren’t much for theory, but they know instinctively not to do things halfway. You have to go the distance.

Wildlife biologist and writer Douglas H. Chadwick is author of The Wolverine Way. Photographer Steven Gnam specializes in exploring and illuminating our connection to nature.