Why cemeteries are a surprising source of life

In the heart of Brooklyn, New York, one of the most densely populated places on the planet, researchers have discovered a new animal species: a shimmery beetle, smaller than a grain of rice, with an exoskeleton of olive green and red.

Marc DiGirolomo, a biological technician at the U.S. Forest Service, found the insect in Green-Wood Cemetery, 478 acres of graves and greenery, with sweeping views of lower Manhattan. The wood-boring jewel beetle was discovered in the cuttings of a European beech tree.

“We never expected to find something new to science,” DiGirolomo says, who came across the new species as part of an insect identification study by the U.S. Department of Agriculture.

The USDA chose to study Green-Wood in part because of its high concentration of native, non-native, and rare plants. The cemetery has 7,000 trees of more than 700 different species, making it rife with insects and larger animals. That biodiversity is no accident: Green-Wood’s horticulture team works year-round to plant and maintain a huge variety of plants, trees, and shrubs, earning the cemetery Level III Accredited Arboretum status—one of only 29 in the world.

But long before Green-Wood officially became an arboretum in 2015, the cemetery was already a refuge for the dead and the living, including a variety of plants and animals. And Green-Wood isn’t alone. For nearly 200 years, many U.S. graveyards have been repositories of urban biodiversity, home to unexpected, beautiful, and sometimes even undiscovered species.

Here’s how it all began. 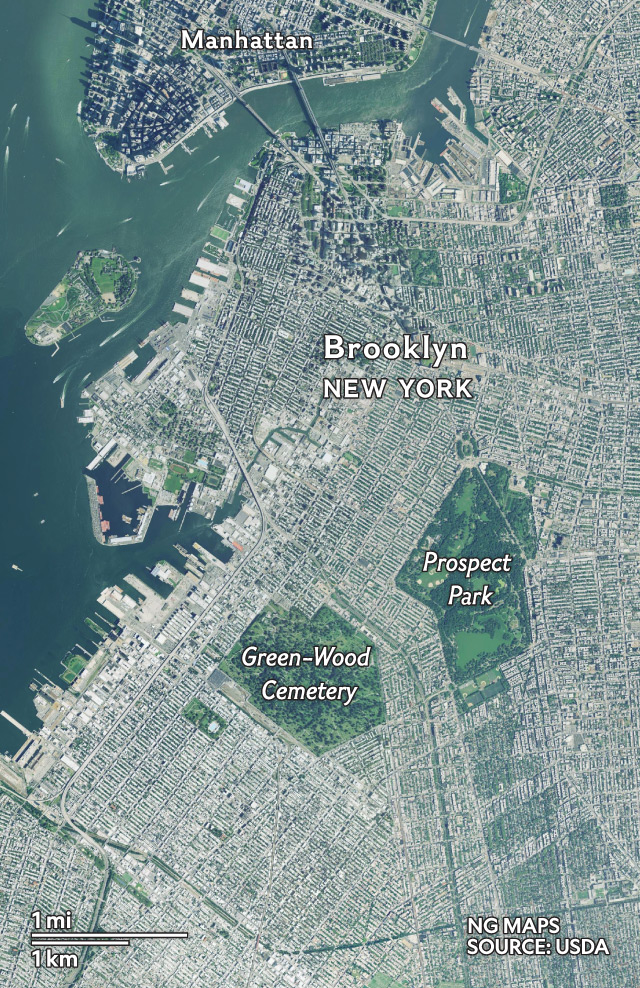 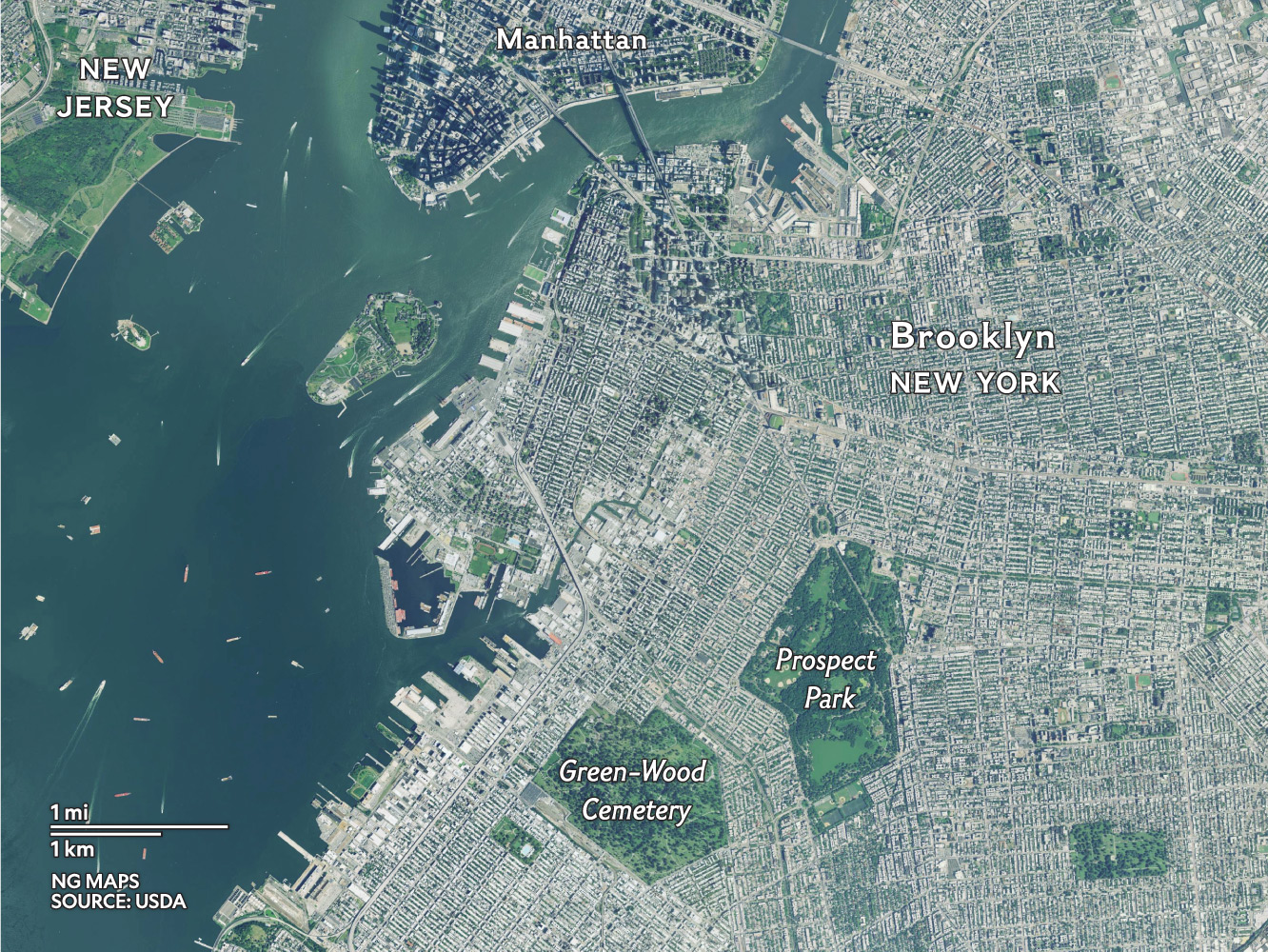 In the mid-1800s, American burial grounds were not pretty. At the time, settlers largely buried their dead the way Europeans did, in churchside graveyards. In cities like New York, whose populations skyrocketed in the early 1800s, these small plots became overrun with dead bodies. Residents complained of terrible odors, and ghastly scenes of shallowly buried coffins, uncovered by heavy rains, were common.

Before scientists understood how germs were spread, they blamed a lot of illness on “bad air,” which, they imagined, oozed from ripe graveyards. These unsightly places became the object of major scrutiny by residents and doctors.

Burial infrastructure wasn’t the only system that had failed to keep up with the booming population: There was no formalized garbage system, sewage filled the streets, and diseases spread easily. There also weren’t many places for respite. At the time, the U.S. had no major parks or arboreta.

Then, in 1831, Massachusetts politician Henry Dearborn partnered with doctor and botanist Jacob Bigelow and landscape architect Alexander Wadsworth to create Mount Auburn Cemetery. The grand burial garden just outside Boston created a more spacious, sanitary space for the dead, while also providing a pleasant place for the living. They not only buried bodies, they planted trees.

The founders of the American “rural cemetery movement” drew their inspiration from Paris. After an overloaded 18th-century graveyard collapsed through the walls of a basement apartment, architects and urban planners decided it was time for a new approach. In 1804, they opened the now-famous Père Lachaise Cemetery, a garden-like cemetery on what was then the edge of the city. Today it cradles the remains of stars like Gertrude Stein, Jim Morrison, and Oscar Wilde among its 110 acres of trees and rolling hills.

The founders of Mount Auburn were inspired to build their grave garden far enough away from the uncomfortable heat, smells, and crowds of Boston’s urban core, but close enough for a day trip.

Six years after Mount Auburn’s formation, a wealthy New Yorker named Henry Evelyn Pierrepont got in on the trend. Taking advantage of a financial depression known as the Panic of 1837, he bought up lots in Brooklyn. The next year, he opened Green-Wood Cemetery. Located on the highest natural point in the borough, it was a space for burial and renewal, offering shady strolls and striking views.

“There [were] really no parks of substance in existence in New York City,” says Green-Wood Cemetery historian Jeff Richman. There was no Central Park, no New York Botanic Gardens, no Metropolitan Museum. “And so where did you go on your day [off] when you weren’t working? You could go to Green-Wood.”

And people did. By the 1850s Green-Wood was second only to Niagara Falls as the most popular tourist attraction in the U.S. The cemetery even had its own police force to keep mourners and tourists living in harmony.

Visitors came for the art, monuments, to visit their loved ones, and for the ever-flourishing greenery.

“At the turn of the century, a lot of these cemeteries were the places for the introduction of new tree species to North America,” says Joe Charap, director of horticulture at Green-Wood. The cemetery’s walkways had grand names that referenced these species and other natural beauties: Sassafras Avenue, Fir Avenue, Crocus Path. The design was chosen to create a romantic, sylvan setting, antithetical to the city. “They wanted you to get the sense that you were communing with nature,” Richman says.

Green-Wood also inspired New York’s more famous parks. In an 1848 essay, famed landscape architect and co-designer of Central Park Andrew Jackson Downing wrote, “Judging from the crowds of people in carriages and on foot, which I find constantly thronging through Green-Wood and Mount Auburn, I think it is plain enough how much our citizens of all classes would greatly enjoy public parks on a similar scale.”

The plant diversity was a big part of the draw. “Indeed, these cemeteries are the only places in the country that can give an untraveled American any idea of the beauty of many of the public parks and gardens abroad,” Downing wrote.

These large garden-like cemeteries were the first publicly accessible green spaces in many cities, and often predated park boards and university horticultural departments. A lot of them also came before the USDA started releasing Hardiness Zone maps, which tell gardeners which plants and crops do well in what climatic regions of the country.

So how did these cemetery managers get their horticultural knowledge? Starting in 1887, the newly formed Association of American Cemetery Superintendents started holding annual conferences where they spent a surprising amount of time talking about plants. Superintendents would describe what species they could grow successfully and help others determine which plants might do well in their climate. They addressed planting techniques, had rousing conversations about how to properly ward off cabbage worm infestations, and recommended newly introduced decorative tree species from far-flung countries.

These talks were “always about diversity, always about trying something new,” says Paul Aarestad, director of building and grounds at Lakewood Cemetery in Minneapolis, who collects booklets produced at these early meetings. (See photos of garden cemeteries that were among America’s first urban parks.)

Like Green-Wood, Lakewood started more than a decade before the local park board and drew many visitors to its meticulously planted grounds. Today, Aarestad manages the cemetery’s 250 acres, which are home to about 3,000 trees. He raises nearly 100,000 flowers each year in the cemetery’s greenhouse, in operation in the cemetery since 1888. He sees his planting work as a continuation of the efforts of those early graveyard horticulturists.

From past to present

Over time, many cities expanded and now surround their once-peripheral garden cemeteries, making these sites even more accessible—and vital—to city-dwellers. Many, like Lakewood and Green-Wood, have continued to grow their mission as public parks by creating evermore beautiful and varied gardens.

Their role as green oases amidst dense city streets, paired with their distinctive architecture, make cemeteries uniquely positioned to be hotbeds for urban biodiversity. In London’s expansive Highgate Cemetery, a rare spider species that requires total darkness was found in the sealed vaults; up to 100 of the spiders, which had never been found in London, were discovered living among the dead. And five years before Marc DiGirolomo discovered the new beetle at Green-Wood this summer, a relic population of redback salamanders was found in a hidden glen of the graveyard.

When DiGirolomo saw the unusual beetle in the cemetery, which he first happened upon in 2017, he used a choose-your-own-adventure-style “taxonomic key” to identify it. These keys lead scientists through a series of characteristics like coloring, body segmentation, and host. When DiGirolomo got to the end, there was nothing. He double-checked his work, but still came up empty-handed, except for knowing that it was a type of jewel beetle, a large group of wood-boring insects so-called for their often iridescent hues.

So DiGirolomo emailed his colleagues around the world to see if they had seen anything like it. Sure enough, the beetle was new to science, and has been tentatively named Agrilus sp. 9895. Besides its colorful exoskeleton, this beetle also has a notable forehead—green for the males, red for the females. The males have unique genitalia, which didn’t match up with any known species. But this cemetery-dwelling arthropod is most similar to European species, and so far it has only been found in Green-Wood’s European beech trees, leading scientists to believe it migrated here from across the pond.

This migration isn’t uncommon: Many non-native insects in the U.S. are suspected to be accidental hitchhikers on the accessories of global trade. Many wood-boring beetles spend much of their lives as larvae inside of a tree, making them difficult to detect. Trees are felled for lumber, lumber is turned into pallets, pallets are loaded and shipped across oceans.

In fact, it was Green-Wood’s proximity to major shipping ports (as well as its biodiversity) that drove the USDA to select the cemetery as a study site. The goal of this study was to help identify potentially invasive insects. Despite increased regulations requiring lumber to be fumigated or heat treated, some larvae survive the transoceanic trip. And once they emerge, these insects can cause damage to unprepared trees, carving out tunnels just beneath the bark and making it harder for a tree to get water and sap to its branches.

So far, the new beetle doesn’t appear to be dangerous, but researchers will keep a close eye on it, with good reason. Since the early 2000s, tens of millions of trees from the East Coast to the Midwest have fallen to a different invasive beetle: the emerald ash borer, introduced to the U.S. from China, which has hit cemeteries like Green-Wood and Lakewood hard. Green-Wood’s arborists don't want the same thing to happen to European beeches, which are more than a century old and integral to its landscape.

“They’re beautiful,” says Green-Wood’s design and landscape project manager Sara Evans. “[Their bark] looks like the skin of an elephant.” The trees inspire awe in Evans, and they were planted to do just this. But, she says, there was another reason why the European species was selected. They grow fast. Much faster than American beech.

And this used to be common: For all of the early cemetery managers’ focus on biodiversity, they also strove for efficiency and beauty, which meant they often planted large stands of one type of tree, usually a fast-growing, exotic variety. Such monoculture stands, however, are vulnerable.

In recent years, cemeteries like Green-Wood have been diversifying their plants to promote resilience, which is even more important against the backdrop of new threats to trees—enabled by both global trade and a warming climate that allows pests to migrate northward, Evans says. Just like those early cemetery managers did at their annual meetings, staff at cemeteries like Green-Wood are continuing to gather and share biological knowledge—for the good of our public landscapes.

Katie Thornton is a writer, podcaster, and 2018-2019 Fulbright-National Geographic Digital Storytelling Fellow. You can follow her work about death—and life—on Instagram.