The Canada warbler has lost 63 percent of its population since 1970. Its numbers are likely to decrease further as climate change alters its habitat, according to a new Audubon report.

As they soar through the sky, birds seem blissfully impervious to the stresses of Earth. Indeed, their ability to migrate makes them more resilient to habitat disruption than less dynamic creatures.

That makes the most recent annual report produced by the National Audubon Society, a nonprofit dedicated to protecting birds and their habitat, particularly startling.

Released today, the report predicts that if Earth continues to warm according to current trends—rising 3 degrees Celsius (5.4 degrees Fahrenheit) by 2100—more than two-thirds of North America’s bird species will be vulnerable to extinction due to range loss. (A March 2019 study, suggests that drastic and immediate action will be necessary to slow warming to just 2 degrees by 2100.) 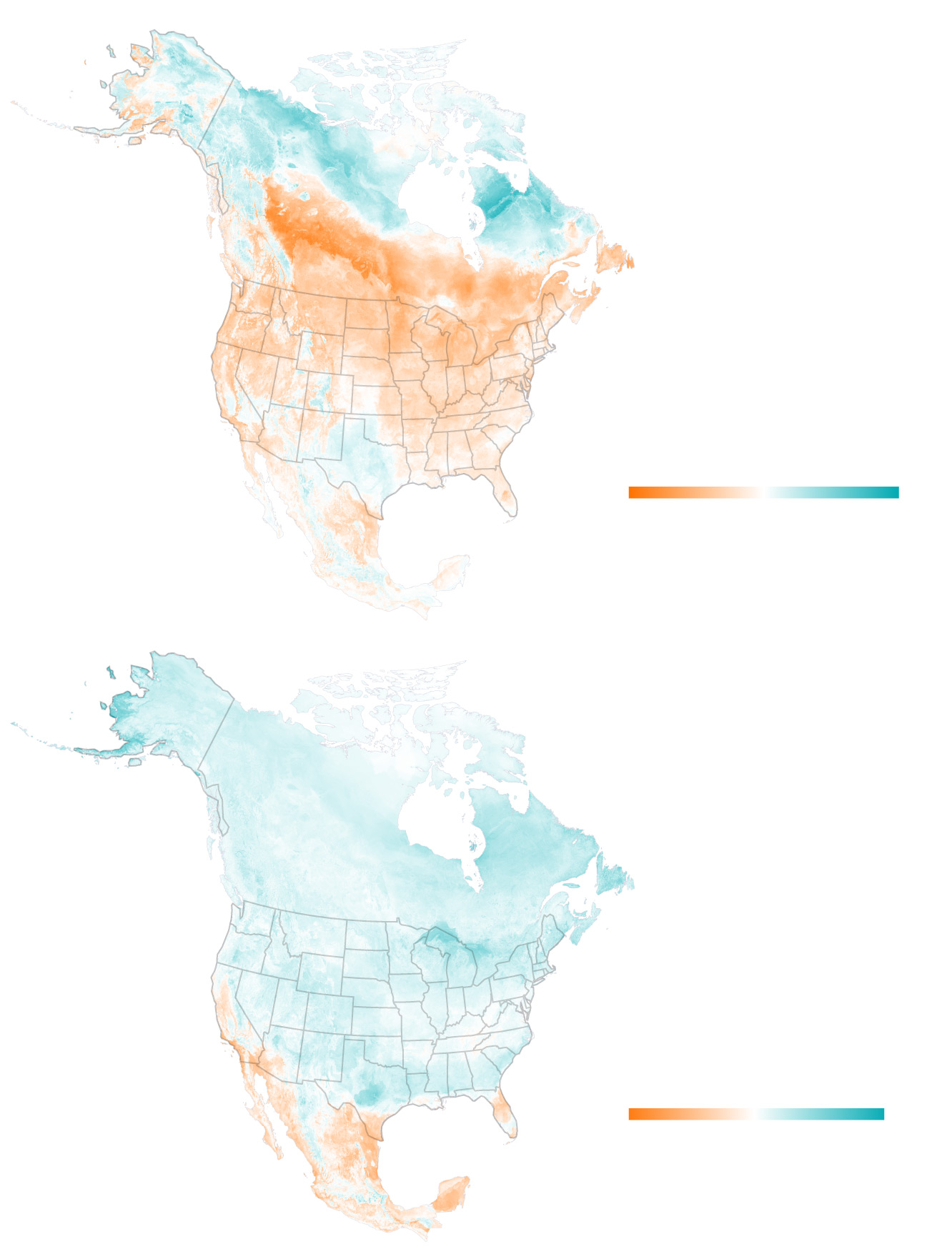 While such projections are concerning enough on their own, the study’s implications go beyond the avian world. “Birds, because of their relatively greater capacity to disperse and migrate, serve as a conservative baseline for other taxa facing the threats posed by climate change,” the report says. Put simply: Birds are sentinel species, or indicators of the environment’s health, so Audubon’s dim projections about their future portend even worse implications for other animals. (Read why birds matter.)

The Audubon report comes in the wake of an equally bleak paper published by Science last month, which found that North America’s bird population has plummeted by 2.9 billion breeding adults since 1970.

Kenneth V. Rosenberg, a conservation scientist at Cornell University and the American Bird Conservancy, and the lead author of the Science paper, says his research and Audubon’s report are complementary. “We've been documenting loss that's occurred over the last 50 years,” he says. “Using some of the same data, the Audubon study makes predictions about what might happen projecting forward.”

To assess the danger that climate change poses to 604 of North America’s bird species (out of an estimated 800 to 900), the National Audubon Society collated more than 140 million records from recreational birdwatching databases, long-term surveys, and scientific studies.

They loaded the reports into machine learning algorithms that condensed the data into models of each species’ current distribution. Audubon’s team then used projections about future climate and vegetation conditions to forecast how these variables might affect each bird species’ range.

Separately, they examined how events such as wildfires, extreme spring heat, and heavy rainfall might affect birds and their habitats.

Luke DeGroote, the avian research coordinator at Powdermill Nature Reserve, in Pennsylvania, who was not involved in the study, says the report is an important warning. “This is a model, so it’s not going to be perfect, but they put a lot of thought into it,” he says. “The results it projects are dire. It’s time—past time—that we start paying attention.”

The data show that North American birds living closer to the North Pole seem to face the most peril. All 16 Arctic species and 47 of the 48 boreal forest species examined were deemed to be moderately or highly vulnerable to climate change. But they are not alone.

Brooke Bateman, the Audubon report’s primary author who also leads the organization’s climate science team, says she was startled to realize that every single species she evaluated faced risks from climate change. Iconic birds are no exception. If Earth warms by 3 degrees Celsius, as predicted, Audubon estimates that 13 out of America’s 50 state birds might struggle to live in the states they represent during at least one season of the year. Minnesota’s common loon, a sleek black-and-white bird with beady red eyes, could lose its entire summer range; Pennsylvania’s ruffed grouse, a plump creature with dappled feathers, could lose both its summer and winter ranges. Other state birds that face losing range in their states: the willow ptarmigan in Alaska; the American goldfinch in Washington, Iowa, and New Jersey; the purple finch in New Hampshire; the northern flicker in Alabama; the mountain bluebird in Idaho; the lark bunting in Colorado; the hermit thrush in Vermont; the California quail in California; and the brown thrasher in Georgia.

“No species is going to escape some pressure,” Bateman says. As she points out in the report, the climate is changing 20 times faster today than it has during any period during the past two million years. “Things are happening in decades that used to happen in thousands of years,” she says. “Birds are going to have to move even further to stay within the conditions that they’ve evolved to inhabit.” (Read why more of them may end up in national parks).

EXCEPT FOR THE CALIFORNIA QUAIL, SHOWN IN WINTER.

THREATS TO A SPECIES’ SUMMER HABITAT, EXCEPT FOR THE

The potential consequences of inertia are frightening. Birds are critical for maintaining forest health, controlling insects, and pollinating plants. Moreover, Bateman says, they're an accessible part of nature that most people see every day. “If birds disappear, even just the soundscape around you is going to change dramatically,” she says. “For me, it's the common loon. The fact that I could go to the same place I grew up in Wisconsin and not hear them anymore at that location is really upsetting.”

But Audubon’s research left some room for optimism—or at least mitigated pessimism. In addition to calculating how a 3-degree Celsius increase would affect North American birds, Bateman and the report’s other authors looked at what would happen if humans could slow the rise of global temperatures to 1.5 degrees Celsius (2.7 degrees Fahrenheit). They found that containing the increase to that amount would reduce vulnerability for 76 percent of North American bird species. Furthermore, 38 percent of species that would be vulnerable in the warmer scenario would no longer be classified as vulnerable at all.

“Seeing all of the people that have been participating in the climate marches recently, and the energized younger generation gives me hope,” Bateman says. “If we take action now, we can really make a difference.”