If you unbuild it, they will come—the fish, that is

Every spring, alewives—a kind of river herring about 10 inches long—swim up Mill Brook to spawn in Highland Lake, near Portland, Maine.

If you unbuild it, they will come.

It's early June, and I'm drifting with mask and snorkel in the chilly waters of Mill Brook, a wooded stream in Westbrook, Maine, no more than six miles from downtown Portland. All around me are silvery fish, swimming up from the Gulf of Maine to spawn in Highland Lake, about 11 miles from the sea. Their scaly bodies thump against me with an energy that’s ineffable and uplifting.

About 10 inches long, the fish are alewives, a kind of river herring, also known as sawbellies because of the sharp modified scales on their undersides called scutes. They spend about four years feeding in the ocean before returning to the place where they were born. The alewives in this pool are staging at the bottom of a waterfall, waiting for the next rain to swell the brook and allow them to continue upstream roughly three miles to Highland Lake.

I’m mesmerized watching them circling—a symbol of nature’s abundance and relentlessness, of the fundamental urge to create more.

And yet, for more than 250 years, alewives were absent from Mill Brook and the larger river it flows into, the Presumpscot.

What made the return of these fish possible was the removal, in 2002, of a dam—the unblocking of this one artery in the extensive circulatory system of the Gulf of Maine, a region of the Atlantic Ocean that extends from Cape Cod all the way to Nova Scotia.

The return of alewives to Mill Brook encouraged the Presumpscot Regional Land Trust—a community-based nonprofit that stewards this area—to protect roughly six miles of the riverine corridor downstream of Highland Lake to its junction with the Presumpscot. About five years ago, streamside trails opened, and every year starting in mid-May, Mainers from the Portland area come here to marvel at the alewives during their two-to-three-week run.

“It’s a very lucky time to be paying attention to these things,” Zach Whitener says as we stand on the edge of Mill Brook. Whitener, a biologist with the Portland-based Gulf of Maine Research Institute, has studied the life history of alewives for more than a decade,

As many as 60,000 alewives migrate annually between the marine environment where they live and the freshwater spawning location.

Juveniles hatch in less than one week. In the fall they begin their own migration. 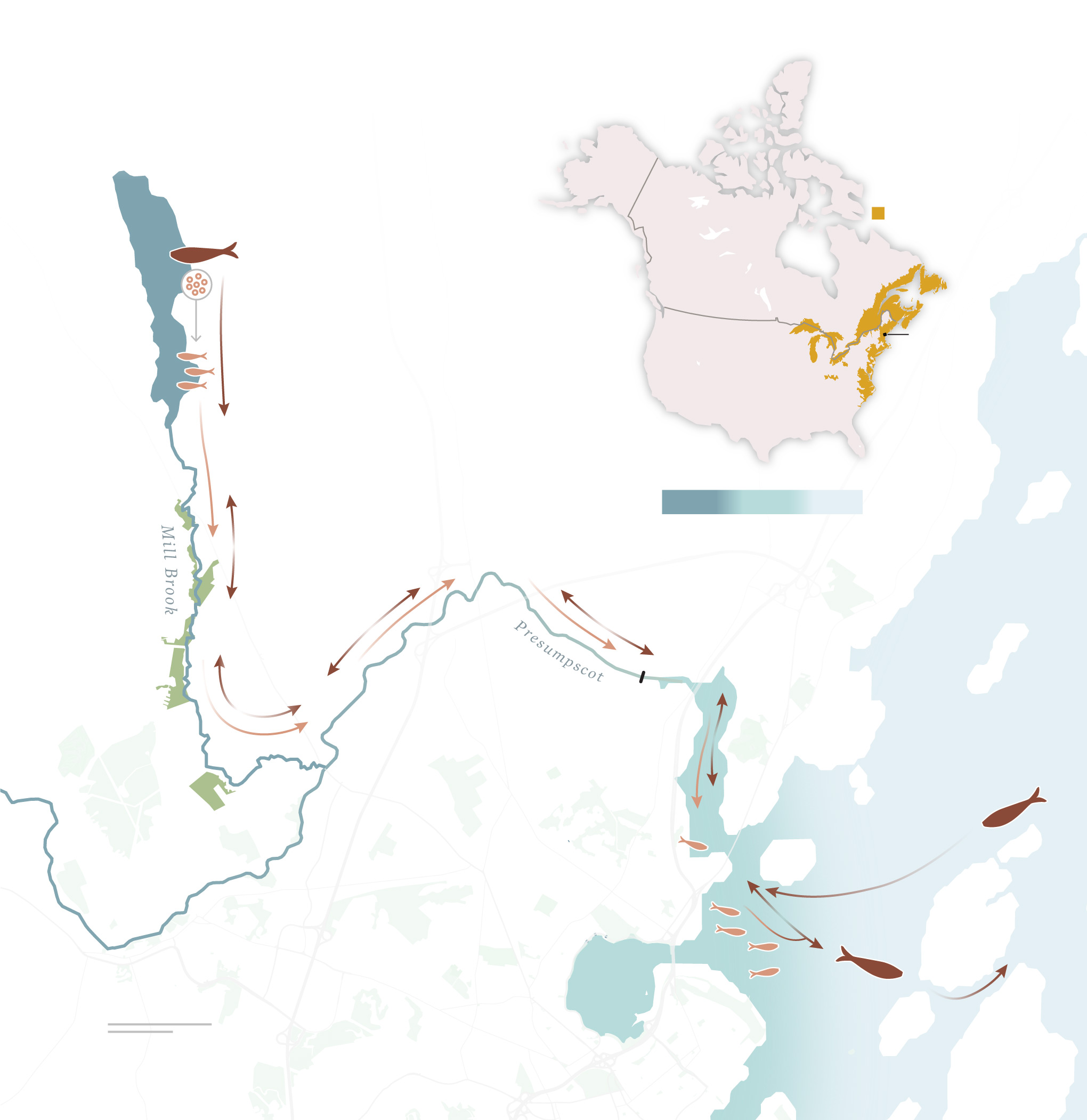 As many as 60,000 alewives migrate annually between the marine environment where they live and the freshwater spawning location.

alewives spend about two weeks spawning in the lake, before heading downstream to the sea.

Juveniles hatch in less than one week. In the fall they begin their own migration.

of their life cycle.

of their life cycle.

“Despite the overall doom and gloom of climate change, and our collapsing groundfish fisheries in Maine,” he says, “it’s enheartening to see, this close to Portland, a natural system that’s recovering.” (Groundfish are those, such as cod, that spend much of their life on the floor of the ocean and are becoming scarce in the Gulf of Maine because of overfishing and warming waters.)

There are now 60 to 100 alewife runs throughout the state, Whitener says, and the numbers keep going up as more dams are removed, enabling the return of not only alewives but also other migratory fish: salmon, shad, sturgeon, blueback herring, striped bass, eels. He rattles off some statistics: The Kennebec alewife run, no longer stoppered by the Edwards Dam, is estimated at about five million. The Penobscot, reopened by the taking down of Great Works and Veazie Dams in 2012 and 2013 respectively, now has two to three million alewives swimming upriver.

Whitener has a particular affection for alewives. Unlike their close cousins Atlantic herring, which spend their entire lives in the ocean, alewives traverse the ecosystems of the land—they’re anadromous, spawning in fresh water and living their adult lives in the sea. This “biomass across the state—15 million fish or so that come inshore into rivers and into ponds—just moves so much energy and so many nutrients into the freshwater system,” Whitener explains. “Absolutely everything eats them.”

Indeed, it’s a long list of creatures that eat alewives in both fresh and salt waters, among them seals, whales, eagles, osprey, herons, mink, skunks, raccoons, otters, black bears, and other kinds of fish—not to mention insects and crayfish and the microorganisms that consume and process what’s left.

Whitener, who grew up lobster fishing in Maine on a small island in Casco Bay, says alewives are a valued resource for humans too—they provide the first fresh bait in the spring for lobster and halibut fishermen. Before alewives began running again, most fishermen used frozen Atlantic herring caught the previous fall—not considered as good as the fresh fish. (Whitener adds that there’s a tradition in Maine of preparing smoked alewives for food, but they’re “the most salty, bony, oily fish you will ever eat.”)

In spring, bait fishermen trap alewives in river weirs or scoop them up in hand-held dip nets. The bait fishery is strictly regulated by quotas. “Each river has its own specific management goals or thresholds,” Whitener says. An avid striped bass fisherman, he says he sometimes takes his dip net quota of up to 25 alewives a day during the run in Mill Brook.

When dams come down

It was in Maine that the removal of hydropower dams to revitalize rivers was pioneered in the United States, with the deconstruction in 1999 of Edwards Dam on the Kennebec. The listing the next year of Atlantic salmon in the Gulf of Maine under the Endangered Species Act spurred more dam removals to save the beloved “king of the river.” By then, fewer than a thousand salmon were thought to be running statewide. Alewives and other less charismatic fish have been the beneficiaries too.

Unbuilding dams is expensive and labor-intensive (the removal of Edwards Dam cost upwards of $7 million), but the rewards are almost immediate as their elimination restores natural flows of life on land and in the sea. (Read about how two-thirds of the world's longeswt rivers are no longer flowing freely.)

A dam was built at the head-of-tide (the highest point of high tide) on the Presumpscot River in the 1730s to power a sawmill in the town of Falmouth. That marked the end of the alewife run up to Highland Lake. In 1898, the dam was fortified and reconstructed to provide hydropower and became known as Smelt Hill Dam. Nearly a century later, in 1996, flooding inflicted heavy damage, and it was decided that the dam should go. The U.S. Army Corps of Engineers—in partnership with Maine’s Departments of Marine Resources, Environmental Protection, and Transportation—began clearing away the structure, and by the fall of 2002, Smelt Hill Dam was a memory.

Biologists, meanwhile, had stocked Highland Lake with alewives, hoping that without the dam, those fish would make their way to the sea and back up again to spawn. That’s exactly what happened: The riverine pulse returned, and with each year, the run of alewives returning from Casco Bay grew bigger. Today, about 70,000 of the fish make their spring journey up the Presumpscot and Mill Brook to Highland Lake to spawn, Whitener says.

If alewives feed many animals bodily, they feed us spiritually. Nature’s show of resilience at Mill Brook this year seemed especially poignant amid all the uncertainty and worry about the COVID-19 pandemic. People strolled the banks among the hemlocks as warblers sounded their spring songs, reveling at the sight of alewives massing for the next leg of their migration upriver. The children’s faces were full of wonder.

For Rachelle Curran Apse, director of the Presumpscot Regional Land Trust, who grew up in nearby Gorham, the increased popularity of Mill Brook’s alewives this season has been a mixed blessing. The concern is that too much activity on the banks can stress the fish.

“This run is coming back because a lot of humans cared and went out of their way,” she said. “We must steward it without overwhelming it.”

James Prosek is an artist and writer living in Easton, Connecticut. His newest exhibition, “Art, Artifact, Artifice,” at the Yale University Art Gallery, runs till March 2021. Follow him on Instagram at @jamesprosek.