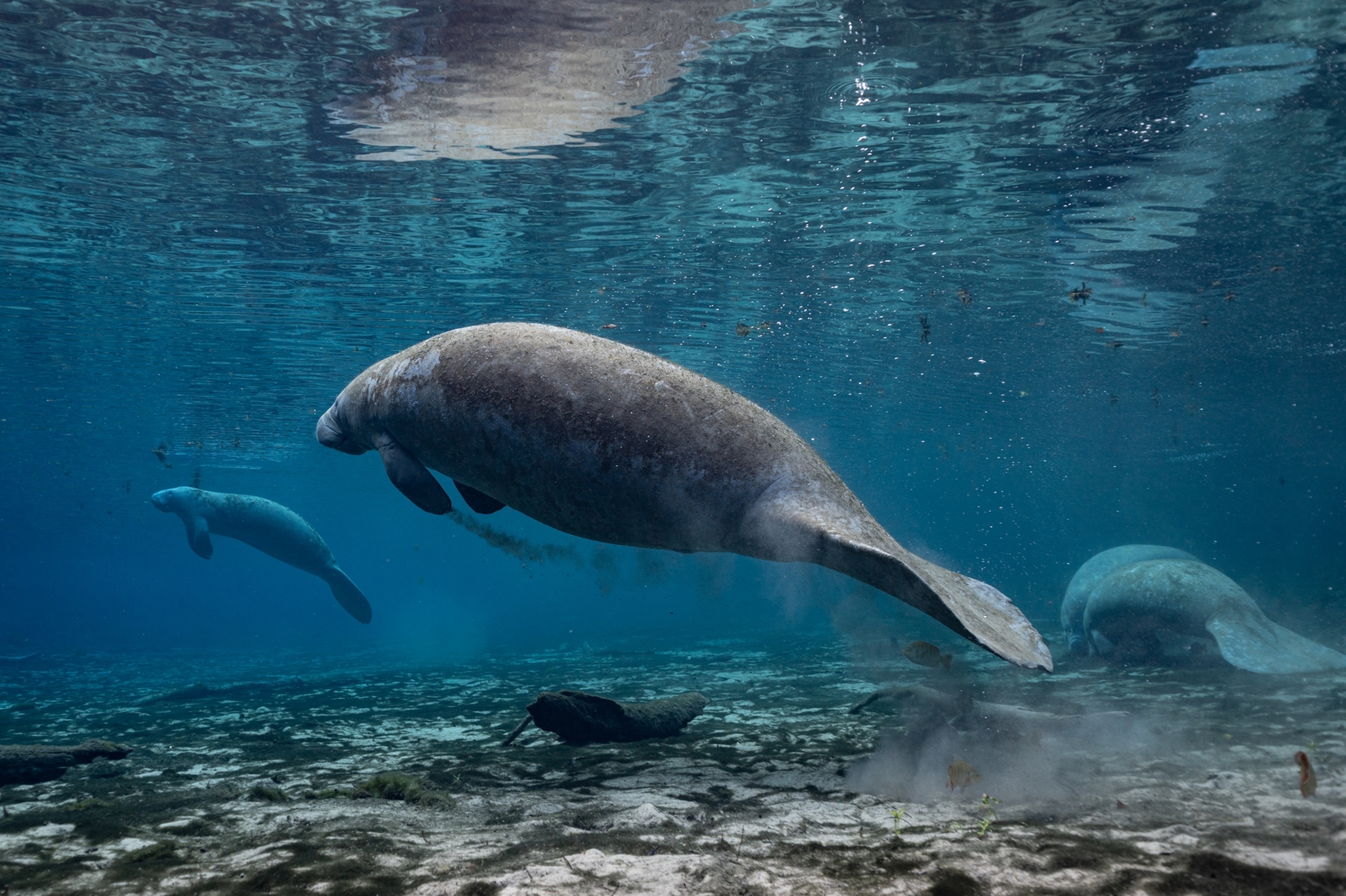 Scientists are searching for answers as to why more Florida manatees have died in the first two months of 2021 than in most of 2020.

Native grasses which once lined the bottoms of Florida’s springs—such as Fanning Springs, pictured here—are being choked out by algae fed by fertilizer and nutrient runoff. This lack of vegetation is causing many manatees to starve to death in the winter.

Early this past winter, Martine de Wit noticed a spike in the number of manatees that were dying. At first, the veterinarian with the Florida Fish and Wildlife Conservation Commission attributed the surge to cold stress. De Wit was used to seeing some manatees sickened by the strain put on their sensitive bodies when water temperatures dip below 68 degrees Fahrenheit, as they did several times in December and January.

“But as winter progressed, something seemed off,” says de Wit, whose lab is located in St. Petersburg. So far in 2021, more than 430 manatees have perished in Florida’s waters, almost triple the count for the same period the year before.

Recent cold snaps forced these temperature-sensitive mammals to seek shelter in the warm waters of Indian River Lagoon, part of an estuary system that stretches from Ponce Inlet to Jupiter Inlet on Florida’s Atlantic coast. Most of the deaths have occurred in these waters, which are shallower and more sheltered than the ocean and thus warmer in winter.

The alarming toll has marine biologists and veterinarians scrambling for answers, while the commission’s pandemic-depleted rescue staff has been racing to save sick animals.

Cold stress typically kills juvenile manatees, but this die-off has included a large percentage of adults, many of them emaciated. “We believe the main cause is starvation,” de Wit says. She and others say they think that the manatees are starving because of a dearth of seagrass in the lagoon, caused in part by increases in water pollution.

Almost two and a half million pounds of nitrogen and phosphorus from agricultural chemicals, lawn fertilizers, and leaky septic tanks flow into the lagoon each year. As the water quality has deteriorated, some manatees have been wintering in waters warmed by discharges from power plants along Florida’s Atlantic coast.

To stay in prime condition, manatees need to consume as much as 10 percent of their body weight daily in seagrass or other aquatic plants, such as mangrove leaves or hydrilla, says Mike Walsh, co-director of aquatic animal health at the University of Florida College of Veterinary Medicine, in Gainesville.

Manatees are rotund not because they have layers of insulating blubber but because their digestive tract is so bulky. A manatee that “loses body weight is much more open to developing secondary issues or not being able to overcome factors like cold,” Walsh says. Some develop lesions on their flippers akin to frostbite, he adds.

Laws to safeguard manatees date back to the British occupation of East Florida in the 18th century, making them some of the oldest wildlife protection laws in North America. But by the mid-1900s, numbers of the gentle creatures had dwindled to the low hundreds. In 1967, the U.S. Department of the Interior put the Florida manatee on its first list of animals protected under the newly created Endangered Species Preservation Act, requiring steps to be taken to ensure their recovery. Under federal protection, manatees rallied, and by 2017, the U.S. Fish and Wildlife Service removed them from the Endangered Species Act list.

But Patrick Rose, a biologist and the executive director of Save the Manatee Club, a conservation organization in Maitland, Florida, believes that wasn’t justified. “It would have been if we had controlled the risks and threats to the animal today and for the foreseeable future,” he says. “That’s not happening.”

As waters warm up this spring and summer, manatees in Indian River Lagoon are likely to move to areas with more abundant seagrass and other aquatic vegetation. Fewer should die, de Wit says, but manatees are creatures of habit. They’ll almost certainly return to the lagoon next winter, and if conditions elsewhere are too chilly, they’ll end up being trapped there again—and dying.

Waves of cold fronts hit the Sunshine State in early 2021. As more manatees died, de Wit started to put the clues together: Temperatures weren’t low enough for so many to be dying from cold stress, but manatees with atrophied organs and the many dead adults pointed to starvation. (Another cause of manatee deaths, boat strikes, have claimed 17 so far this year, which is about average.)

More than 4,300 species of plants and animals live in the Indian River Lagoon, making it one of the most biodiverse estuaries in the Northern Hemisphere. But algal blooms caused by pollution have persisted in the lagoon for a decade, says Daniel Slone, an aquatic ecosystem researcher with the U.S. Geological Survey.

In December, a particularly large algal bloom depleted dissolved oxygen in the water. Dead fish floated in the mangroves along the shore, and much of the remaining seagrass below that turbid water withered. Manatees began dying of hunger.

“Without healthy aquatic ecosystems, when a lot of manatees die, there’s a risk the species won’t bounce back,” Rose says.

Concerned citizens in local communities have been campaigning to clean up Indian River Lagoon for more than a decade, and Florida’s Department of Environmental Protection has ordered surrounding towns to cut nitrogen and phosphorus in half by 2030.

“Efforts to reduce nutrients are underway,” says Charles Jacoby, the St. Johns River Water Management District’s supervising environmental scientist for estuaries. Old septic tanks are being repaired or replaced, and projects to reduce the phosphorus content of wastewater from the Fleming Island Regional Wastewater Plant are in the works.

In 2016, residents of Brevard County, which encompasses most of the Indian River Lagoon, voted in favor of contributing to a $300-million tax to finance a 10-year clean-up project. So far, volunteers have planted mangroves (mangroves filter water), started oyster gardens (oysters do too), and spread the word about the need to bring the lagoon back to life.

Yet, de Wit says, there’s no telling if the seagrass beds can be restored in time to save Florida’s manatees. For now, she says, there’s no alternative but to try to rescue sick manatees before they die.

Helped by independent biologists, officers with the Florida Fish and Wildlife Commission cast nets around ailing manatees and whisk them away to waiting ambulances. These climate-controlled trucks transport the animals to state-partnered aquariums where veterinarians try to nurse them back to health. The ones that survive are released into the wild near where they were found, sometimes as soon as a month after their rescue.

In warmer months, manatees could move farther away, into areas that have more food and seagrasses, such as around Jekyll Island, Georgia, where spartina grass grows in abundance. But as de Wit says, manatees tend to stick with what they know, and in winter, that’s mainly the Indian River Lagoon.

“We didn't manage the warm water habitat” for the manatees, Patrick Rose says. “So all of the success we had for 30-plus years could be undermined, and we could see a collapse in the population if we don't get these things fixed soon.”