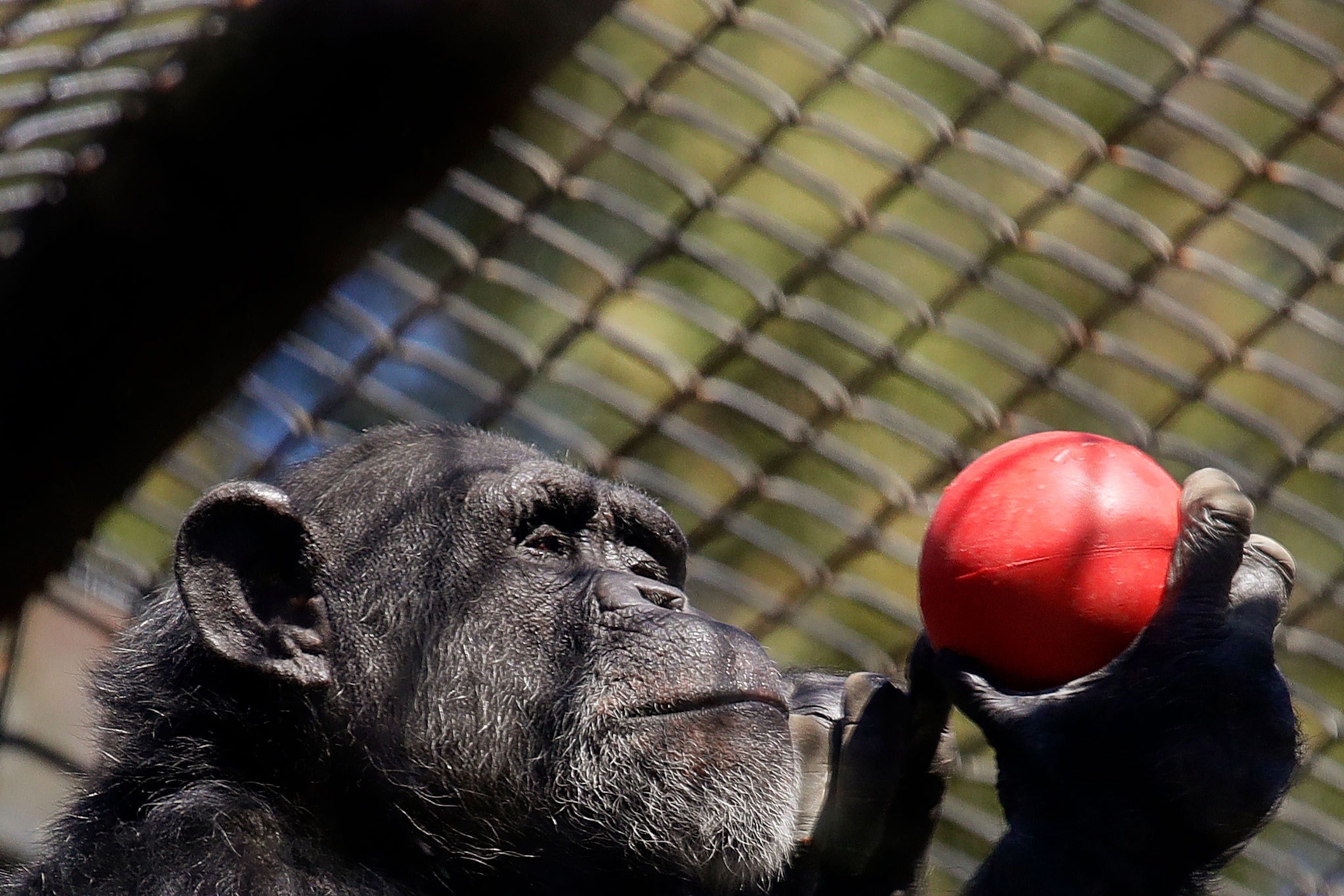 Bears, baboons, tigers are getting COVID vaccines at zoos across the U.S.

Here’s what you should know about the experimental COVID-19 vaccine rolling out to zoo animals—and why your pets aren’t getting it.

A chimpanzee examines an toy at California’s Oakland Zoo in April 2020. The ape is one of 48 animals at the zoo to receive a COVID-19 vaccine made exclusively for animals. Thousands more doses are rolling out to zoos, research institutions, and sanctuaries around the United States.
Photograph by Ben Margot, AP

Kern the brown bear got his COVID-19 vaccine on July 21. Then he ate whipped cream straight from the can.

Along with their vaccines, the tigers got their favorite meat—beef tenderloin—on shish kebab skewers, and a spritz of goat milk in their mouths. The siamangs—big black-furred gibbons—each got a large marshmallow. The baboons: gummy fruit snacks and a (peeled) hard-boiled egg.

At the Oakland Zoo, in California, 48 animals—including hyenas, chimpanzees, and mountain lions—have received at least one dose of an experimental COVID-19 vaccine made exclusively for animals. Half are already fully vaccinated.

The Oakland Zoo is among dozens of zoos, research institutions, and sanctuaries that have requested the vaccines from veterinary pharmaceutical company Zoetis. The requests came in the wake of news that great apes at the San Diego Zoo became the first zoo animals in the country to receive the vaccines; that was in February, as first reported by National Geographic.

“The story sparked interest from so many of the other zoos, and that’s what led to our big donation plans,” says Mahesh Kumar, senior vice president of global biologics at Zoetis, which developed the vaccine.

Those plans include fulfilling requests to send some 11,000 doses of the animal vaccine to more than 80 institutions in 27 states for free. It’s a promising development for zoo animals, which are at risk of the disease because of their proximity to humans.

But much remains unknown. How effective will the vaccines be? Will they protect animals against the Delta variant? Will the rollout be complicated by anti-vaxxers’ loud objections? And will pets ever need to be vaccinated? The scientists and institutions at the heart of the animal vaccine rollout hope to find answers in the coming months.

Since early in the pandemic, zoo animals have contracted the virus. First, tigers and lions at the Bronx Zoo in April 2020; later, a gorilla troop at the San Diego Zoo Safari Park. In June 2021, two lions died at a zoo in India after testing positive for COVID-19.

“We have such a large spectrum of animals to care for, from little poison dart frogs to elephants,” says Alex Herman, vice president of veterinary services at the Oakland Zoo.

Although the Oakland Zoo hasn’t detected symptoms of COVID-19 in its animals, “we knew our animals were at risk,” Herman says. Her staff are all fully vaccinated, but “we don’t know how severe Delta will be” or the risk of transmission to animals, she says.

“This virus originated in animals and spread to people, and we know it can be spread back to animals,” adds Nadine Lamberski, chief conservation and wildlife health officer at the San Diego Zoo Wildlife Alliance. In addition to wanting to keep more of the San Diego Zoo animals safe, “we wanted to do our best to interrupt that [transmission] cycle to prevent the virus from sticking around.”

Getting an experimental vaccine to zoos

After a dog tested positive for the virus in Hong Kong in February 2020—the first reported case in a domesticated animal—Zoetis began developing a COVID-19 vaccine for dogs and cats. By October 2020 the pharmaceutical company had confidence it was safe and effective in both species.

The experimental vaccine, Kumar says, works similarly to the Novavax vaccine for humans, which is currently in large-scale efficacy tests. Instead of using mRNA (like the Pfizer-BioNTech and Moderna vaccines), a viral vector (like the Johnson & Johnson vaccine), or a live virus, it uses synthetic spike proteins to trigger the same antibodies the live virus would. (Here’s the latest on COVID-19 vaccines.)

The vaccines are being distributed to zoos on an experimental basis. The U.S. Department of Agriculture (USDA) is not considering commercial approval of any vaccines for animals, with the exception of mink on fur farms where outbreaks have spread widely, Kumar says. (At least 12,000 mink have died from COVID-19 on fur farms in the U.S. alone and are believed to have transmitted the virus to humans in some cases.)

The company has received many requests from zoos and other facilities internationally, but the added logistics of navigating various countries’ regulations will be a challenge, Kumar says. For now, they’re focused on U.S. zoos.

Deciding which animals get the vaccine

A year and a half into the pandemic, scientists still know little about how the virus affects non-human animals. Some studies have identified species that may be at heightened risk. In many cases, the veterinary community must rely on limited data sets, learning what it can from individual clinical cases and sporadic outbreaks in a handful of species.

Both the San Diego Zoo and Oakland Zoo requested vaccines for all of their primates and carnivorans—a group of animals that includes big cats, bears, hyenas, ferrets, and mink, among others. These animals are known to be susceptible to the virus, but aside from the deaths of the two lions in India, the majority of big cats and primates have had only minor respiratory symptoms and have made full recoveries.

At the San Diego Zoo and the San Diego Zoo Safari Park, 266 animals have received at least one dose of the vaccine. None of the animals there or at the Oakland Zoo have shown any side effects, according to Lamberski and Herman.

Harley the hyena gets her COVID-19 vaccine at the Oakland Zoo on July 8. She enjoyed eating favorite treat—deer ribs—while veterinarians gave her the shot.

After the Oakland Zoo announced plans to vaccinate some of its animals, it immediately faced backlash from anti-vaxxers on social media, by phone, and by email. Anti-vaxxer Instagram influencers with tens of thousands of followers helped amplify the attacks.

“It was such an onslaught,” says Erin Harrison, vice president of marketing and communications at the Oakland Zoo. “Saying you’re poisoning your animals, killing your animals.”

Many of the messages, filled with misinformation, took the fact that the vaccine is legally defined as experimental to be an indication that zoos were conducting experiments on their animals. “Half of them said we’re going to report you to PETA,” Harrison says.

PETA, for its part, then put out a statement in support of the Oakland Zoo, noting, “These vaccines have been clinically tested and administered to animals only after deep consideration by veterinary professionals. Since growing numbers of big cats, apes, and otters in zoos are contracting SARS-CoV-2—the virus that causes COVID-19—from asymptomatic humans, the evidence clearly indicates that the benefits of vaccination in susceptible species far outweigh the dire risks of infection for unvaccinated animals.”

The Oakland and San Diego zoos plan to do antibody testing of the vaccinated animals and share the results with the zoological community to build a database that can help determine the vaccine’s efficacy in various species.

Although dogs and cats have tested positive for COVID-19 in a smattering of cases around the world, the Centers for Disease Control and Prevention and the World Small Animal Veterinary Association (WSAVA) don’t recommend vaccinating pets, due to their relatively mild clinical signs and the lack of evidence that pets can transmit the virus to humans.

“It remains our opinion that there is no need for owners to consider vaccinating their pets against SARS-CoV-2 at this time,” notes WSAVA in an April 29 report. (Michael Lappin, chairperson of WSAVA’s One Health Committee, confirms that WSAVA’s opinion has not changed.)

Between zoo visitors and animal caretakers, the chances of a zoo animal getting exposed to the virus is higher, Zoetis’s Kumar says. When compared to lions and tigers, “I wouldn’t say that [domestic] cats are less susceptible—just that the cat is getting exposed to people probably a lot less.”

Any request to vaccinate a cat or dog would have to go through the same process as vaccine requests for zoo animals, with individual approval from the USDA and state veterinarian. “You can imagine if we got 100,000 requests for cats and dogs. So it’s not a practical way for us to supply it,” says Kumar.

Vaccinations for cats and dogs would depend on the government soliciting and authorizing broad commercial use, he says. The USDA is currently only accepting applications for animal COVID-19 vaccines for mink, so unless that changes, the Zoetis vaccine will only be available for other species on an experimental, case-by-case basis.

“The best way to prevent [COVID-19] in dogs and cats is not to let their people become infected,” says Lappin. In other words, Kumar says to pet owners, “vaccinate yourself.”

Orangutans and bonobos at the San Diego Zoo have received a coronavirus vaccine, Nat Geo has learned, after some zoo gorillas tested positive in January.
Exclusive: Buddy, first dog to test positive for COVID-19 in the U.S., has died

Exclusive: Buddy, first dog to test positive for COVID-19 in the U.S., has died

Even though the German shepherd likely had cancer, his health records show how little we know about animals and the coronavirus.
Several gorillas test positive for COVID-19 at California zoo—first in the world

They are the world’s first non-human primates with confirmed cases of the virus.
Seven more big cats test positive for coronavirus at Bronx Zoo

Following a National Geographic inquiry, the zoo confirms that four more tigers and three lions have the virus. This comes the same day as two pet cats in New York become the first in the U.S. to test positive.