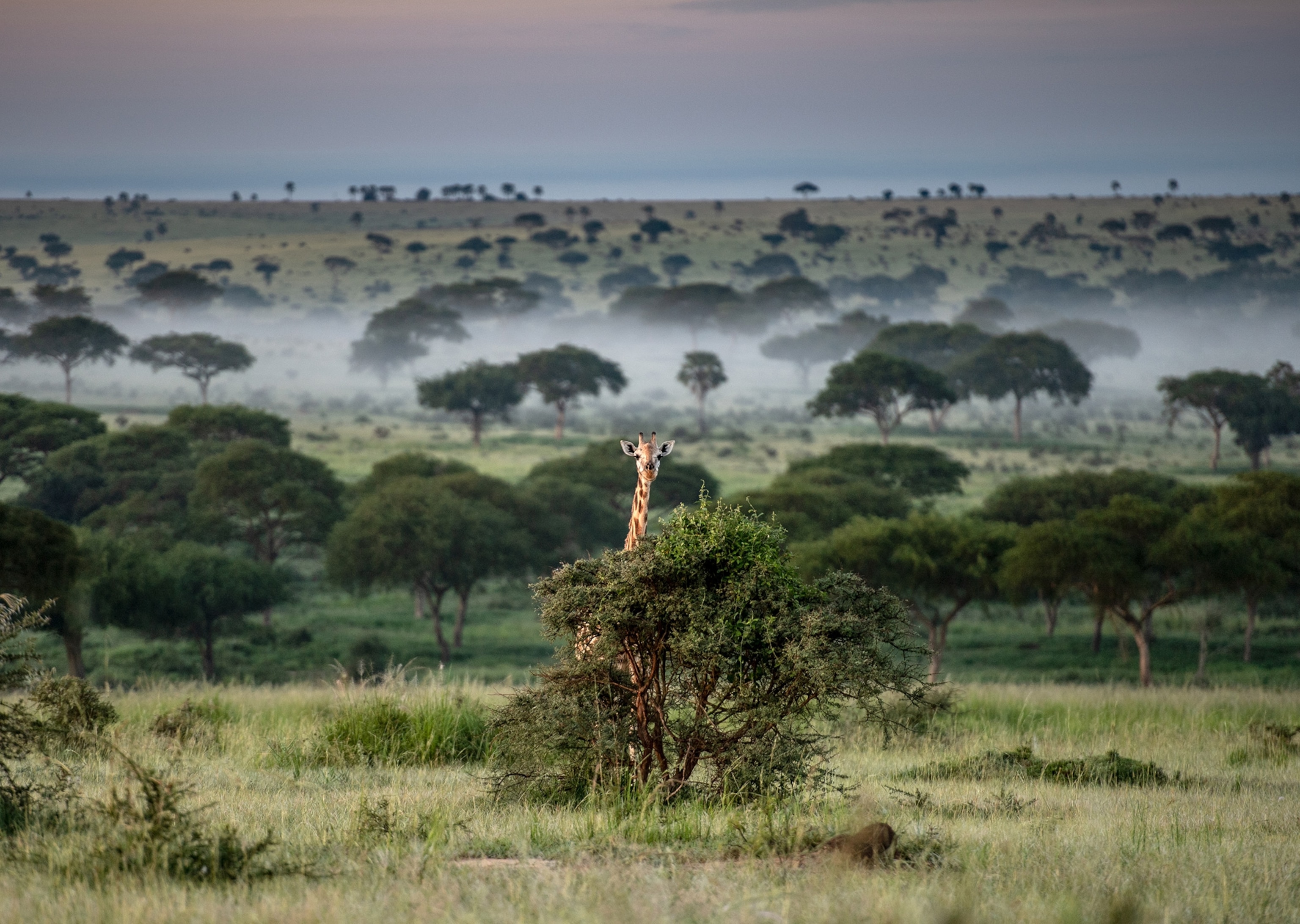 Lions, giraffes and even a silverback gorilla are recent casualties of the collapse of ecotourism.

Murchison Falls National Park is a stronghold for remaining giraffes in Uganda. During the coronavirus pandemic, more local people are setting traps to catch animals such as antelopes for meat to eat or sell. The traps are indiscriminate—last month, rangers on patrol in the park found seven dead giraffes that had been ensnared.

Night after night, men infiltrate the forests blanketing northwestern Uganda. They come by boat, paddling east across Lake Albert in canoes made from hollowed out trees, before creeping into the lush undergrowth of the country’s largest protected area, Murchison Falls National Park.

They quickly unload their cargo—cheap wire snares and deadly steel traps repurposed from old car parts. The latter, made locally in Uganda and across the border in Democratic Republic of the Congo, require little skill to use. They’re also powerful enough to snap the leg of an antelope, giraffe, or lion. Animals pinned to the ground may die from a combination of blood loss, dehydration, and starvation. The devices are indiscriminate—they snag any animal that stumbles into them.

Authorities believe that thousands of these illegal devices have been hidden within Murchison and Uganda’s nine other national parks since the coronavirus lockdown began in mid-March and flatlined the wildlife tourism industry. The Uganda Wildlife Authority (UWA) recorded 367 poaching incidents in the parks between February and May of this year, more than double the number during the same period in 2019, says Charles Tumwesigye, the agency’s deputy director of field operations. And those numbers likely underestimate the problem, because dead animals and traps may be whisked away before authorities detect the activity.

Tourism is a central pillar of Uganda’s economy, bringing in more than a billion dollars a year, and wildlife tourism, in particular, creates thousands of jobs. But the sudden loss of visitors in the parks, where their presence helps deter poachers, has hampered ranger operations. Without tourists, Tumwesigye says, it’s easier for poachers to monitor the comings and goings of rangers and make a move the moment they leave an area. Tourism also financed all the anti-poaching work. “With staff not sure of whether they will continue getting salary without tourism, I think the morale and zeal to combat poaching went low,” he says. The lockdown also has led some people to believe—incorrectly—that rangers are no longer patrolling parks, emboldening them to poach animals, he adds.

For the most part, Tumwesigye says, locals struggling to feed their families in the wake of tourism’s collapse are the ones setting traps. It doesn’t appear to be related to the organized criminal networks that drive commercial-scale poaching for elephant ivory, rhino horn, and other lucrative wildlife parts. These local people mean to catch antelopes and wild boars to provide bushmeat to sell or eat themselves.

Yet lions, giraffes, and even one silverback gorilla have been recent casualties. Only about a thousand mountain gorillas remain on the planet, and more than half live in Uganda. The country has only about 300 lions and 2,000 giraffes. Such low numbers make the loss of each animal serious, says Paul Funston, lion program director and Southern Africa regional director for Panthera, the global wild cat conservation organization—"especially adult lionesses and cow giraffes,” he says, “as they are key to future population trends.”

Pandemic-related poaching is only the latest setback for Uganda’s wildlife. Many of the country’s animals died between the 1960s and 1990s when a coup, a war with neighboring Tanzania, and a six-year civil war fueled poaching and kept visitors out of parks. Elephant numbers dropped from an estimated 30,000 to 2,000, and giraffe numbers by 90 percent. Lions likely also declined. In recent decades, though, Uganda’s expansion of its wildlife tourism industry has also allowed it to finance anti-poaching efforts.

In June, UWA rangers and partner groups fanned out across a swath of Murchison on a two-day patrol. In an area once popular with tourists, they discovered traps with seven dead giraffes in them, says Michael Keigwin, founder of the nonprofit Uganda Conservation Foundation, which assisted UWA’s rangers. “We found five in one day and two in the next, all in one area,” he says. “It’s very sad.”

A particular concern now in Murchison and some other national parks is the safety of lions. Before the pandemic, cattle herders sometimes illegally poisoned lions in retaliation for their preying on livestock, Tumwesigye says. But what he’s seeing now is different.

On May 16, a lion with several body parts missing was found in Queen Elizabeth National Park. Details are scarce, but in several African countries, lion heads, tails, and paws are used in traditional medicine, called muti, because of their association with prosperity or good luck. Poaching for lion muti has increased in South Africa since 2016, and now Tumwesigye and his team are investigating whether that’s happening in Uganda as well.

Other lions known to live in Queen Elizabeth National Park are missing from their usual home areas, says Ludwig Siefert, a wildlife veterinarian and team leader of the Uganda Carnivore Program, a nonprofit that researches and monitors the country’s large carnivores, including lions, leopards and hyenas. And at least four lions have been found trapped in snares in Murchison during the past few months, according to Tumwesigye. The lions were set free and likely survived, he says. “Lions, as social species, usually survive even with most debilitating injuries as long as they can benefit from the social group,” Siefert says.

To protect lions and track their movements, the UWA, the Uganda Carnivore Program, and the Uganda Conservation Foundation are intensifying efforts to put satellite collars on lions in the national parks. During the past few months, three lions in Queen Elizabeth park have been fitted with collars and one in Murchison, but lack of money is a constraint, according to Siefert. “We cannot afford to collar all lions,” he says, so the groups are concentrating on those animals known to wander into communities where they may be at greater risk of getting killed.

Loss of a gorilla troop leader

Even the country’s famous mountain gorillas have suffered a recent loss. Last month, antelope poachers confessed to spearing a 25-year-old silverback named Rafiki when he allegedly charged as they were hunting. A gorilla hadn’t been killed in Uganda in nine years, likely, in part at least, because local communities benefit from gorilla tourism and want to protect them.

“This incident drives home a lot of the conservation challenges we face,” says Martha Robbins, a biologist and National Geographic Society grantee who directs a long-term research project on Africa’s mountain gorillas.

Gorilla viewing expeditions bring in a large portion of Uganda’s tourism dollars—directly supporting jobs for porters, cooks, cleaners, and drivers of tourist vehicles. Before the pandemic, the permit foreign visitors had to buy to observe gorillas with a guide cost $600. Communities living near national parks benefited from revenue sharing agreements that gave them a portion of both permit and gate fees. But no tourists means no cash.

“Given the loss of revenues and income from tourism, as well as overall economic hardship caused by strict lockdown measures, it is not surprising if illegal activities have increased in the past months. People are trying to survive,” Robbins says. “Conservation needs to have multifaceted approaches, and the needs of local communities require more attention so the whole house of cards doesn’t fall apart when global tourism comes to a halt.”